I used Home Run in quite a few crosses this past year and a few of the seedlings have started to bloom. The first one is with Cal Poly as the seed parent, the other 2 are with Loving Touch as the seed parent. So far it looks like Home Run is giving quite a diverse range of colors.

P.S. If the link does not work, I’ll try to post them from another forum. This is my first attempt at this and I know just enough to make me dangerous.

I like 06-73-06 so far. As you know Liz I had these crosses slated for this season. It’s nice to know what to expect.

My first seedling using Home Run pollen will be in flower soon.

By the foliage, I suspect it will be red.

I’m not sure which one is my favorite. There are a couple more that will soon bloom and I really like the plant form on them. Jadae was right about Loving Touch being leggy, the Cal Poly seedlings are far more compact and put together. I might have to add more Cal Poly x Home Run crosses to my 2007 crossing plans.

Robert, your Lyn Griffith x Home Run cross really brings together some genetics that appears quite diverse. Can’t wait to see what comes out of it.

HI Liz, yes, I am shooting for introduction of strong species disease resistance.

I see a definite trend toward singles when using Home Run? I thought double was dominant to single blossoms for some reason?

My first seedling using Loving Touch as pollen parent seems to be bushy so far, not leggy at all. This could change. It should also flower soon.

I had tried Home Run as a seed parent last year since it was new and I wasnt serioues yet. It failed like I had guessed. This year Im going to try it on Cherry Meililand and Autumn Sunset since I will have more pollen to work with. I might try it on Red Abundace but that idea seems kinda pointless. I want to try it on a hybrid tea but I cant think of a good idea for that type of cross yet.

Cherry Meidiland and Autumn Sunset sound like a great idea.

Personally I think anything by Home Run is probably a good idea. The Autumn Sunset cross should give you a wide array of color options, I think.

Home Run is sneaky. It makes you think it is setting hips like crazy and they never mature.

It needs to be dead headed regularly. That’s a deficit.

I have to say the shape of my own-root plant is really improving as it matures.

I’m with Liz. I think it holds a myriad of possibilities. The pollen is incredibly fertile.

Robert, I found ‘Home Run’ to be very pollen fertile too. The color range has not included any yellows for me yet, so far from light pink to dark red.

I agree that ‘Home Run’ should be put on everything!

The link below is to one of my seedlings last year that I am really liking. It was from a cross of (‘Marmalade Skies’ X ‘Baby Love’) X ‘Home Run’. The seed parent has appeared blackspot resistant to the mild blackspot outbreaks that we sometimes get here in the winter months.

I planted that one outside a few weeks ago and it appears very healthy, with glossy foliage. It has flower buds on it now so should be blooming in about 3 weeks.

How are you going to class this seedling? Thanks, Robert

I have 4 or 5 more Cal Poly x Home Run seedlings with blooms ready to pop open and from the looks of it all are red except 1 that might be a yellow blend. The outer most petal has some yellow in it. From the sounds of it, I have been lucky getting some yellows.

Jim, I had noticed your Home Run seedling before, it is quite nice. I love the relaxed petal form of it. What color was the seed parent?

Thanks Robert, I think that it will be classified as a “shrub”. I know that class is a “waste basket” class for the most part, but I wouldn’t know what else to call it…

Liz, it sounds like you have really struck a good combination with ‘Cal Poly’! Please keep us posted on how the other seedlings develop. I’m hoping to make more crosses using HR and J76-3 in crosses with yellows this season.

G168, the mother plant (‘Marmalade Skies’ X ‘Baby Love’), is a vigorous orangey-pink shrub type with phototropic changes to the blooms. Sometimes it looks more pink and other times more orange. I had thought that since it and HR both have ‘Baby Love’ in them, that I might find some yellow seedlings among the offspring, but that was not the case!

It was a pleasant surprise to see the yellows in the home run seedlings. I have several Morden Sunrise x Home Run seedlings. Who knows, I might get lucky and put together yellow/winter hardiness/disease resistance in a single generation. Somehow I really doubt it.

Jim, I suspect that the odds were stacked against you getting a yellow from G168 x Home Run, but that seedling is very nice.

Robert, Singleness is recessive to doubleness, but it is dosage dependent (the more copies of the dominant allele the more petals). I suspect that Loving Touch and Cal Poly only have 2 copies of the “doubleness” allele, so at least 50% of the seedlings will be singles, a few should have more petals. (Disclaimer: I can not do tetraploid genetics in my head on a Sunday afternoon.)

Well I now have a favorite 06-73-04. The photo really does not do it justice in terms of the actual color. There is another seedling starting to bloom with considerably more than 5 petals, which is nice to see too.

Interesting color. Bill DeVor was our speaker tonight at our local rose society meeting. He says he now has two stable new sports of Home Run being evaluated. If you look at Home Run’s lineage almost anything is possible as far as color goes. What would you describe this color as?

I don’t really know. None of the roses that I have are anything like it. It definitely has a velvet apprearance to it. There is definitely dark yellow underneath the anthocyanins. It is not a russet, I would not call it red or pink either. My first thought when it was opening was terracotta or vermilion. It is definitely starting to fade to more of a pink now. Anyway, there is another bloom that should be open in a week or so and colors might change a bit once it ages and is put outside. Can’t wait to see multiple blooms on the plant. Did Bill say anything about getting tetraploids out of Home Run? Oh, what do the 2 sports look like?

Hi Liz, as you know seedlings often look much different once they are grown out of doors and under normal growing conditions.

Bill didn’t say anything about ploidy of Home Run offspring but I’ll bet it normalizes to tetra in many cases.

There is a stripe and an orange sport. probably the first of many. When grown in the 1000’s under production style conditions it’s very easy to pick out color sports.

Liz, 06-73-04 has a very nice shape to it’s petals. It will be interesting to see a more mature plant/blooms.

It sure behaves like a tetraploid based on such good pollen fertility.

I agree it does act like a tetra pollen parent but then fertile triploids are not uncommon.

It is amazingly similar to the pollen parent. It might have a bit more fragrance and is a true single so far.

I include a photo for comparison of the Home Run on the left and the new seedling on the right. The color seems to be identical.

This hybrid should be a bit more cold tolerant as it descends from both Dornroschen and 77-361.

I’m hoping it will get a bit taller than Home Run. 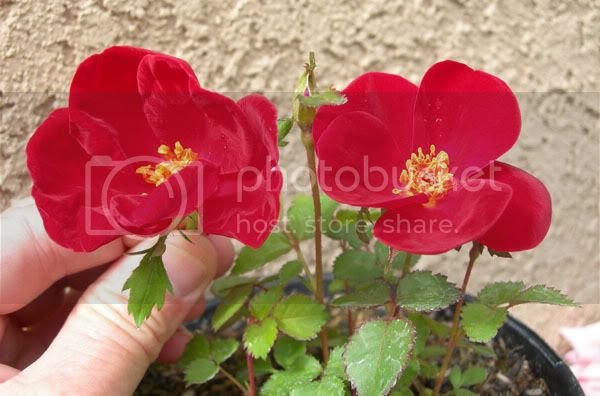