I got most of my rose hips harvested early this yr-I arbitrarily set 100 days as the picking date. Some went over that date, but I do not think anything was picked before 95 days. So I have had the processed seeds, with their calcium nitrate and vermiculite, tucked into the lower produce tray in the family fridge since about late Sept to mid October. Two weeks ago I checked them for any germination and found none, but decided that it was long enough in the cold cellar, and removed them. On Dec 31st I checked again and they were popping up in some baggies like pea sprouts. Yesterday I planted 96 seedlings, and since it was a bit early I ran out of my seedling mix (actually I am out of all potting soil) and still have at least 20-30 more seedlings to plant. One baggie had 110% germination, but since I often do not count the really small poorly developed seeds, I am pretty sure that explains it. These are now outside and hopefully we will not have any repeats of the hail that we had last week. Very nice amount of rain we are now having. The drought might be over, or at least is being staved off.
How is everyone elses’ germinations coming along and under what circumstances?

Planted about 500 this past week. I hadn’t noticed any in early Dec check through quickly. But based on the calendar and when I harvested and set in to stratify, I could have predicted. Very similar timing to last year. Some were like bean sprouts and I lost some of those to dehydration of the hypocotyl or whatever the stem under the cotyledons is called. Others were just cracking through the seed coat and will take a while to actually amount to a plant. I do 144 in a 12 x 6 pak tray. and then put under a bank of fluorescent lights. With good warmth they will bloom in 6 seeks or so and I can do a massive cull of boring singles.

Ought to have another 500 or so over the next couple months.

I’m beginning to see some seeds germinating at 90+ days. Very happy to see OP seedlings from ‘Prairie Celebration.’ Based on its parentage (Orangeade x L83) some may be reblooming. I also used its pollen in 2 deliberate crosses, both unnamed seedlings in my program. Orangeade is extremely prone to black spot in my zone 8b climate, but PC has been absolutely free of black spot and cercospera. PM only rears its ugly head here in years with cool, damp spring weather. I dead headed PC late in the growing season, leaving a dozen or so OP hips, it had a one bloom second “flush.”
Stephen

Congratulations! Hail?! I’m sorry! Fortunately we haven’t had to endure anything like that, but we are getting rain, with the forecast saying to expect some each day for the next week. I planted the first two seedling tables outdoors two (?) months ago and have quite a few germinations in them so far. The most exciting are the Mexican Minutifolia (pink) X Pure Bea (white Mexican Minutifolia) cross. 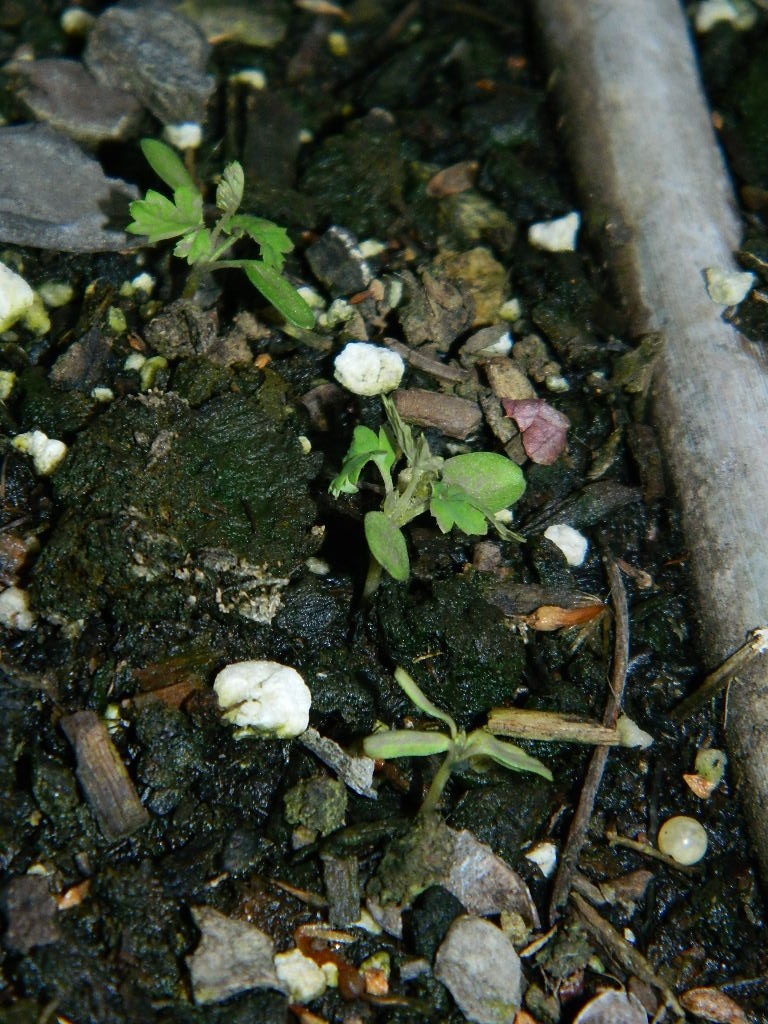 The third table was planted last week and holds many more Minutifolia crosses. Fingers are crossed!

The Minutifolia seedlings are so cute!! Kind of like seeing little puppies or kittens. Of course, that is also said in comparison to the adult plants too, if you know what I mean. i only got one developed hip from the minutifolia crosses I did, but will try many, many more this yr. Now to see if I get ANY seedlings from my couple of seeds, but seeing yours says that it is not impossible.

Thanks, Jackie. Are you using the California Minutifolia, the one commonly available from Tree of Life, Rancho Santa Ana, etc.? The California form isn’t known for setting seed much, if at all. The Mexican form is seed fertile, even setting them by itself. I have raised seedlings using the California form’s pollen, but have never, in easily twenty years of growing it, observed nor stimulated the California form to set a hip. Both Pure Bea and the Berkeley forms are Mexican types and both of my plants have set seed this year, which is all planted. And, yes, I AM pushing both to propagate. There are pots all over the place around both plants for them to tip root into. Put the pollen from the California form on other fertile roses and you should get something…eventually. It is sufficiently seed infertile that using it for seed is generally time wasted.

I am using the California form (got it from the local native plant society), which is generous with pollen. I have read your prior entries in regards to the seed infertility of the Cal. form and did use the pollen on various other crosses. last yr I do remember several successful hips but had a disastrous zero germ. rate, which I had thought was due to my leaving the seeds in the house (protected, of course) while our house was fumigated. But now, after soaking the 2015 seeds really well again, I have a couple of germinations. the seeds had been allowed to get desert dry and I apparently did not rehydrate them adequately. So, I could even get a germ. or two from last yr., but I will not hold my breath. Just will try for a few more crosses this yr. One question: How is the Dr. E. M. Mills germination coming? The pollen I received from you did not take on many of the crosses but if the crosses that have produced seeds are Dr. E.M. Mills, these are germinating like mad. So far the seedlings are very similar (hopefully that is a family resemblance trait) so I am looking forward to see them grow.

Once the rain stops…my, that’s lovely to be able to say! I have to look to see what all is germinating to see if anything from Mills’ pollen is coming up, Jackie.

My first ever rose germination, an open-pollinated Winnipeg Parks. Thank you to everyone on this forum for your help. 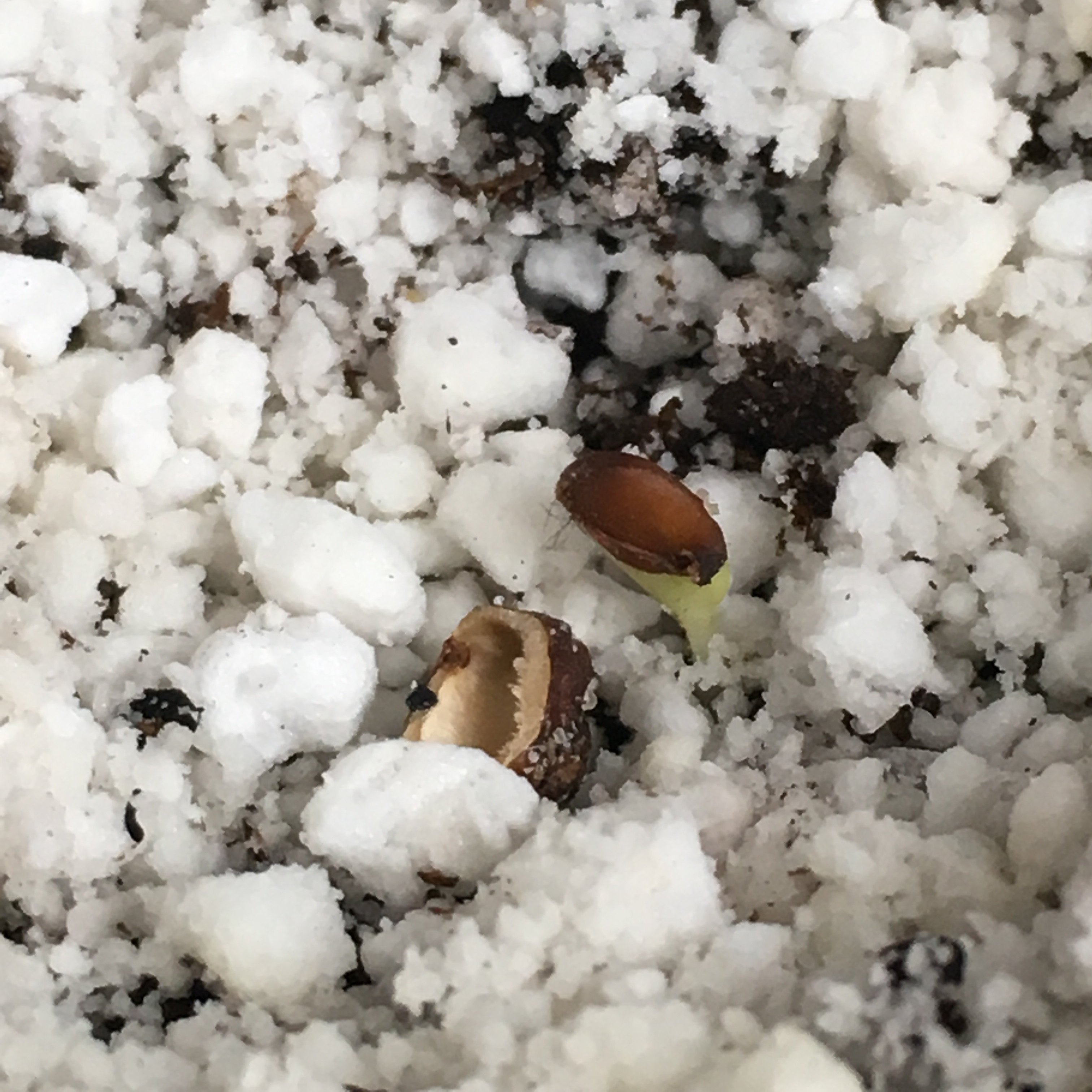 Roselynn,
Congrats on your very first offspring. Now the fun begins, and hopefully you will be seeing many, many more.

Follow-up on success with Prairie Celebration. Using its pollen on my very fertile 08MWIR, one hip produced 13 seeds from which 11 seedlings have so far germinated. 08MWIR selfs quite easily so I’m hoping these seedlings are actual hybrids.
Stephen

My {(Madame Bravy x Rt66) x Moondance x Midas Touch)} X Rosa minutifolia cross (one seed) did germinate. Planted today, will watch it closely, and last week I found one other minutifolia cross (hip) in a one gal bucket that I had left on a covered patio along with a few other hips. So will look for that one to perhaps also germinate-had 4-5 seeds in that hip. The endless rain and storms have ended (at least for now) and have discovered at least a couple of ‘drowned’ seedlings. These were not standing in water, but got so much rain they rotted.

I was very surprised to see my first germination this morning. It is a cross between Geschwind’s Nordlandrose #1 x Applejack, and there is another one that is trying to sprout. I hope I will have more than two…?! 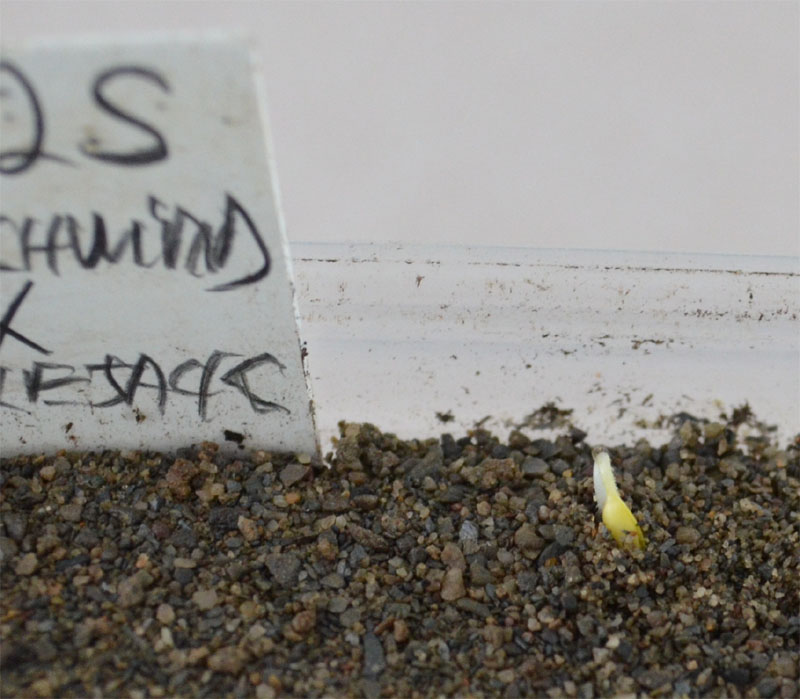 With a break in all this rain we’ve been getting, I quickly took a photo of a new seedling flowering for the first time, but not quick enough to get it before it changed to a darker pinky gold. This is a very mutable [( Lady of the Mist x Cal Poly) X (Gemini x Cinco de Mayo)] that came out in the rain and changed color from a deep golden yellow to this before I got my camera out. I have dissed Cal Poly for not having deep yellow offspring but apparently it does have the ability.It does have a nice little plant under that flower whereas most of my seedlings are more than a bit anemic looking after all this rain. Will remedy that today.

all of my hips fell off last year out of several crosses. I was told that it may have been the heat it got hot here early last year.
I collected seeds from my 2014 hybridizing from some of my promising seedlings, however nothing has sprouted as of yet. 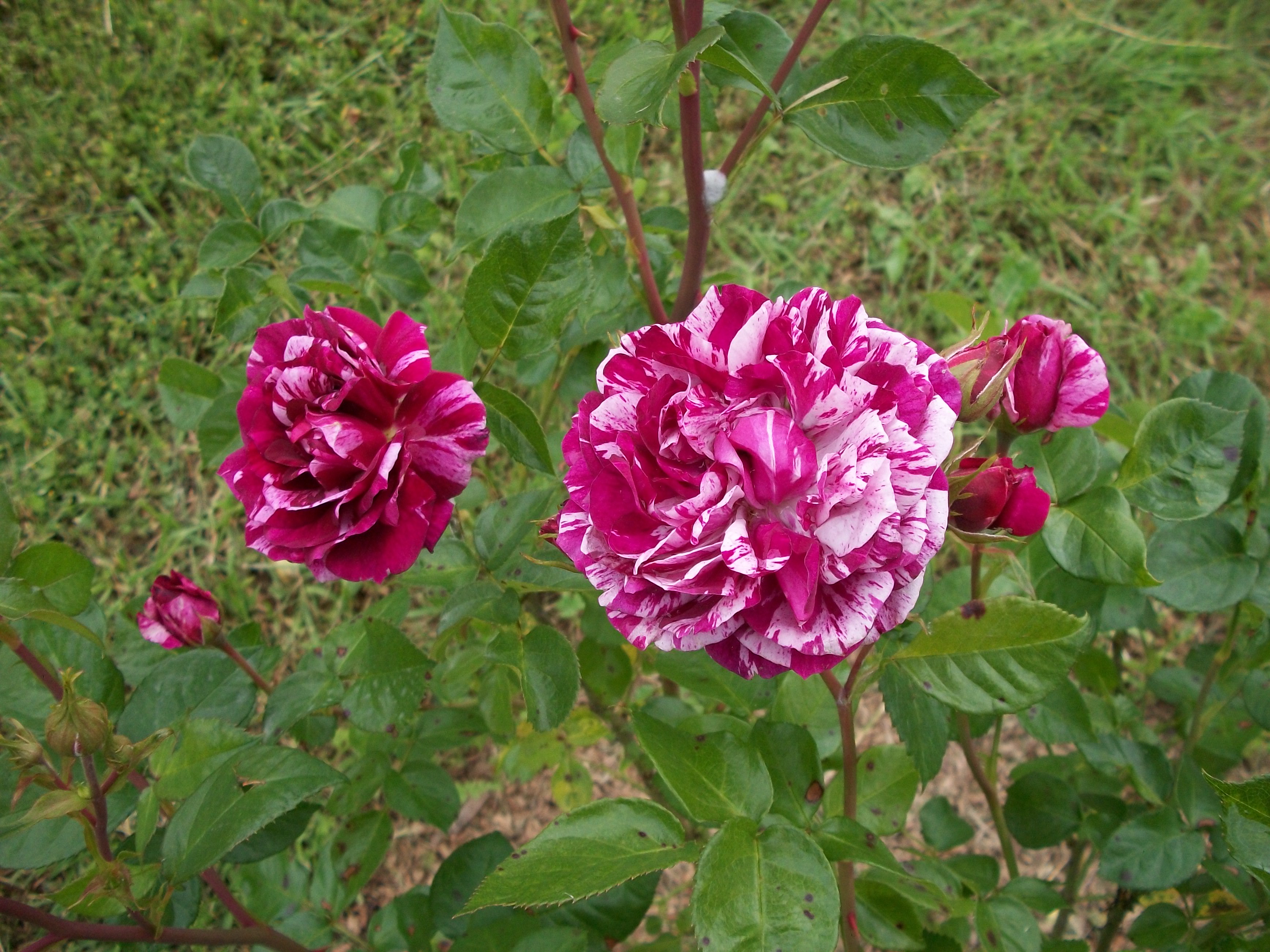 That’s a very nice first bloom, Jackie. (I have a thing for mutable roses.) I hope it develops into something nice and healthy.
Ramblinrose, what is the parentage of that one? Nice contrast on the stripes.

The first flush of seedlings started the end of December and are flowering away now. The polyanthas are primarily what was part of that first flush and generally seem to have reduced dormancy compared to the other classes of roses I’m working with. Over the years I’ve found that at least the polyantha lines I’m working with don’t like to be cold treated in a standard fridge. There is far less germination in the end when I do that and they rot more. If I keep them at about 50F they start germinating prolifically in a month or so. The other groups of roses (shrubs, floribundas, minis, etc.) seem to do better at about 35-40F for their cold treatment. It is fun to have polyanthas blooming now. There is a wide range for flower color, flower size, vigor, and doubleness. I love how well they branch and how prolific they are in their flowering. It is nice to find the thornless ones. At least in these polyanthas thornlessness is a single recessive gene and is somewhat easy to breed for. They still have prickles under their leaves though. My hope is to continue to select for greater leaf spot resistance. Many are pretty black spot resistant, but leaf spot (Cercospora and Anthracnose) resistance seems to be slower and more difficult to breed for.

David Z.,
That is so beautiful! A real dose of springtime. It seems as though the seedlings under lights bloom more consistently and earlier than those that are raised out of doors with cold nights (still over 30F). Philip, try Gemini as a seed parent and soon you will have mostly mutable roses. I like them in many cases, but occasionally I would like to see a yellow just stay yellow instead of going all flamingo pink on me.