This surprised me. This seedling was grown from seed. I’ve never heard of mosaic virus showing up that way. Or is it NOT mosaic and I should be happy about it, lol![attachment=0]PS!.jpg[/attachment] 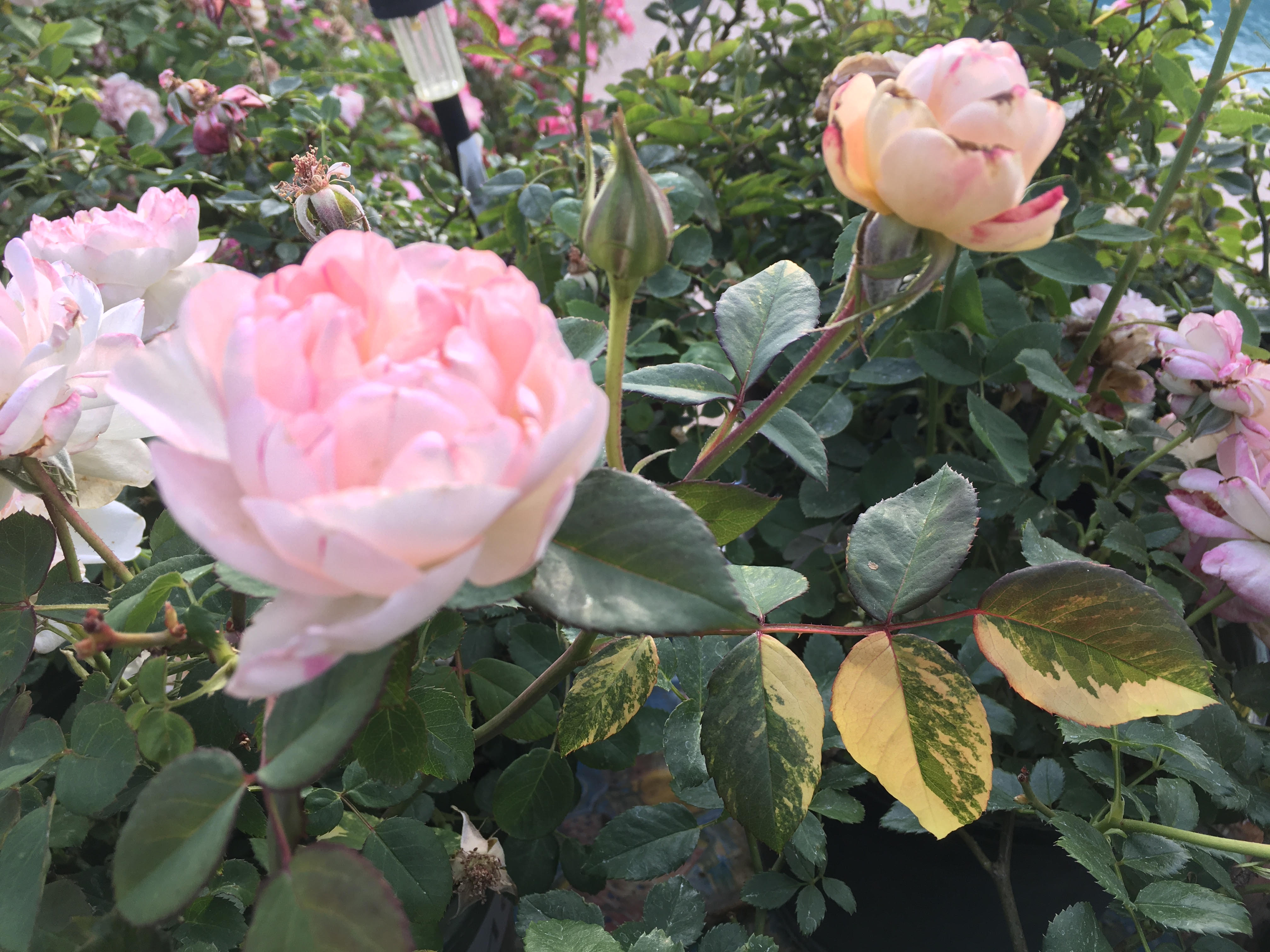 Selfs from Schoener’s Nutkana were FREQUENTLY variegated like that, in both yellow and white. I’ve had a few over the years from other crosses but none of them ever developed into anything worth keeping. RMV supposedly doesn’t cross the placenta. I say “supposedly” only because the more we learn, the more we realize we don’t know, but the current wisdom is, it doesn’t.

Neat! Is it only the one leaf, Judith?

It would be pretty cool (I think) if it were more expansive, stable, and the plant had good health and vigor despite the variegation.

I would be interested in hearing from folks who know something about such, but fingers crossed that growth from that node continues the chimera. Do folks think there would be interest in variegated foliage in the market?

There have been variegated foliage roses on the market. Verschuren, the fragrant pink HT; Achievement, the early twenties Wichurana rambler; and a miniature I’m remembering was a sport of Britestripe (or perhaps it was Britestripe) bred by John Clements way back when. The variegated foliage was a mutation of the solid form as his instructions were to vigorously keep the solid form foliage growth pruned off or it would overtake the variegated growth as it was stronger due to its better ability to feed itself. I’ve grown the Clements’ mini and Verschuren. I don’t honestly know if the market would be that receptive to variegated foliage in roses. Anything that reduces chlorophyll, weakens the plant and that often reduces the vigor, flower production and disease resistance. Of course novelty seekers would look for it but I think a bank of canned bud and bloom plants at Home Depot would be avoided out of fear there was something wrong with them. Even with POP advertising expressing how the variegation makes it unique and “attractive”, I don’t think the average buyer would find it so.

There are rose viruses that transfer through the seeds. You would have to have your plant tested to see which (if any) rose virus it contains.

The question of the properties of the viruses that infect roses has been a controversial one. Fortunately, a federal grant has established a research organization to investigate the virus situation with roses,...

I could imagine a variegated form of e.g. R. glauca could be striking, and of interest primarily for its foliage. But, Kim, you reinforce some of my thinking. Most modern roses are needy enough without the handicap of variegation, and folks don’t think of roses as something to grow for foliage. I know the patterns on the leaves of my own plants don’t impress me at all in my no-spray garden. (Wait! That seedling is blooming yellow! Oh, no. Never mind. Those are leaves.)
(Still, I have often wondered if a decent chartreuse-leaved cultivar might exist, and how extreme the coloring would need to be before crossing from “Ick” to “Ooh”. Most roses that start to veer that direction are sickly looking beasts that do not offset their blooms in any decent way. I could nonetheless fantasize about chartreuse “Margarita” foliage offsetting mauve blooms that would be very striking.)

I’m trying to remember what mauve recent rose I saw photos of with its very yellow-green foliage. it wasn’t impressive. My immediate thought was either the camera adjustment was WAY off or something was horribly wrong with that plant.

I can’t annoy clerks in stores and I’m not smoking, so there has to be SOMETHING to do for fun…

This topic is a curious coincidence. I have also a seedling with this particularity. It is a new seven weeks old seedling, from Lac Majeau OP x Gay Centennial, made last summer just for a test of fertility. I have been very surprise when I have seen first variegated leaves on it. But it seems my excitement is finish, because new leaves are completely green. With those two very hardy parents, I hope this seedling will survive despite his particularity. I don’t know if the plant will show some variegated leaves in the future, but I cross my fingers to see some. 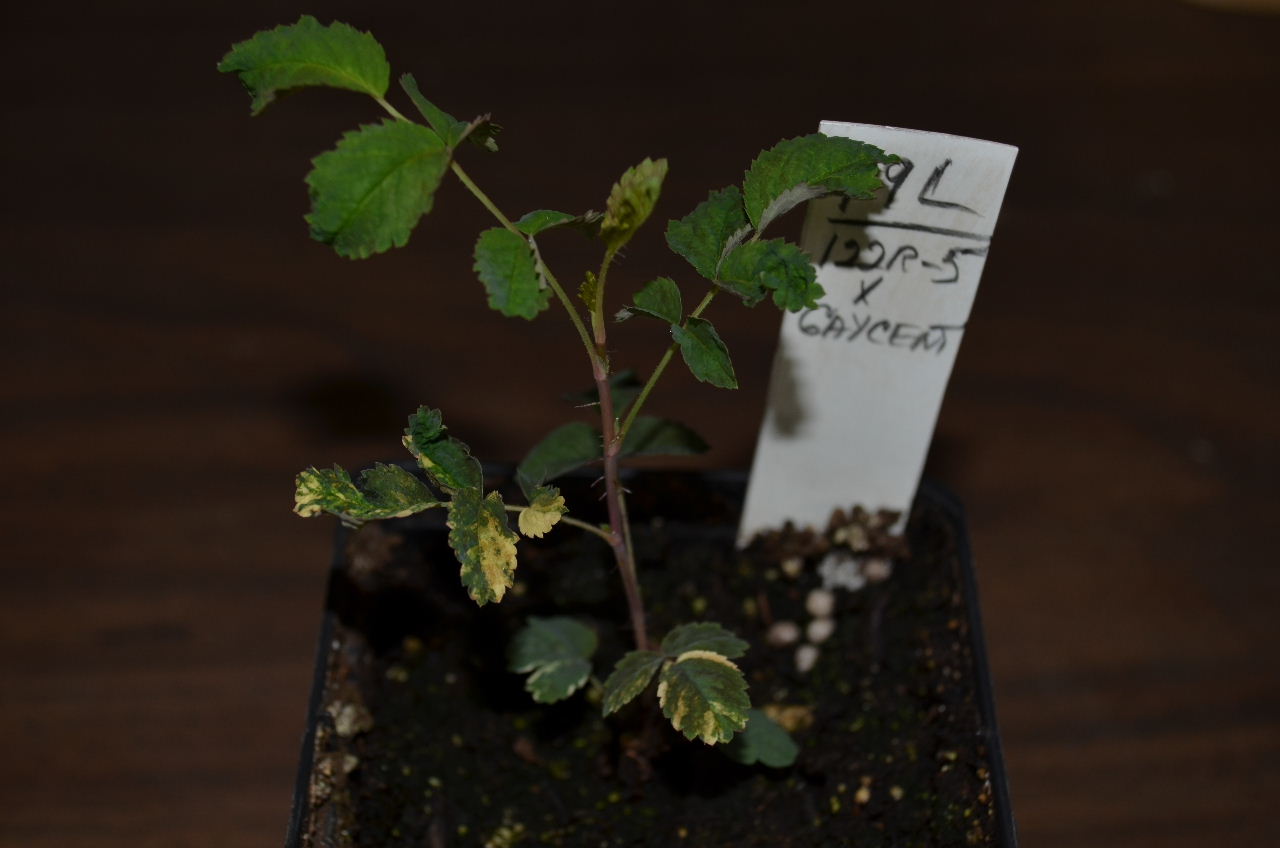 aimbeault, please keep in mind that until you test for a virus, you cannot rule out that possibility.

I have noticed this same peculiarity
In one of my seedlings this year, now in it’s second year. Oddly, I don’t remember seeing any leaves like that last season (it’s first), but there are several on it right now.

Would it be more likely to be a virus or genetic if it doesn’t show up the first year but does the second? Or either one is a possibility? It seems to be a strong growing young shrub now, so I was hoping to work with it.
What now? Try its pollen instead of seed?
Duane

If the seedling is otherwise healthy, vigorous, contains genes you are interested in mining and is suitably hardy for your climate, I’d use the daylights out of it. Even if it is virial, if all of the above criteria are met, it doesn’t appear to be derogatory.

Andre, out of curiosity, do you recall if the cotyledons had any streaking in them? (I’m guessing not, and the newer leaves don’t seem to indicate stability of the trait to my mind.)
I’ve had seedlings germinate that had no chlorophyll. (They had either cream, or orange cotyledons as a consequence, but never showed any chlorophyll when the true leaves emerged, and so quickly expired.) I realized the cause of the color of the cotyledons, but unrealistically hoped for variegated chimeras with some chlorophyll, ultimately…

It is noted Henry, thank you!

Duane, I agree with the comment of Kim. Why not try both, pollen and seed? Good luck with your crosses and have fun!

As you Philip, I have already have had some yellowish-white germination also with same results as you (disappointing). You can see on photo below that cotyledons were green. In fact, variegation was appeared on the second and third leaf. Also, we can see first petiole at bottom right and a small part of it green leaf, back on the third one. 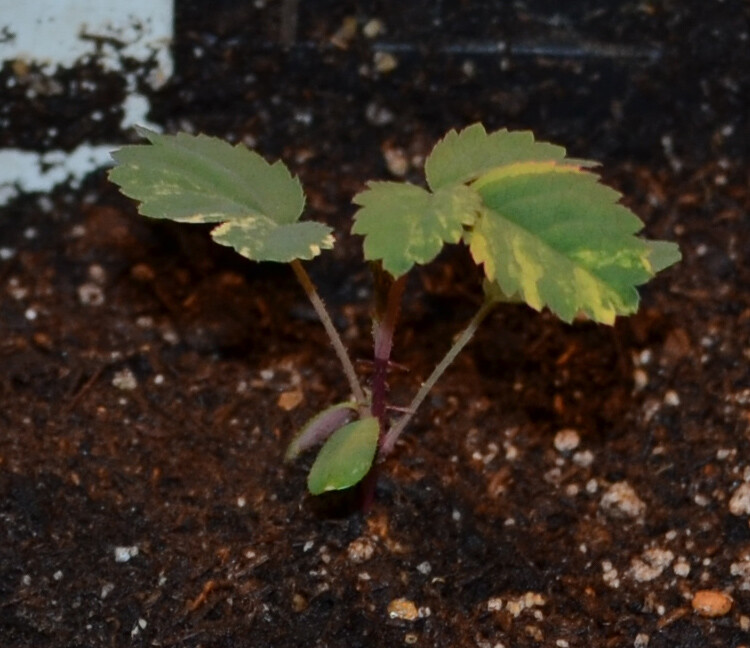 So far we have a plant that may have a virus. Which virus is not known. We have a recommendation to utilize that plant in a hybridizers breeding program. Are there possible problems with that recommendation?

My earlier link gives the modes of infection for the known rose viruses.

“In the case of deliberately produced and distributed virus-infected ornamentals, perhaps the old warning “Caveat emptor” (Let the buyer beware) should be substituted with “Caveat venditor” (Let the seller beware), as there may be liability issues in the event of transmission to other crops.”

The above is taken from:

Here is a very recent example of one of the more common rose viruses, PNRSV, being found for the first time in red Mulberry in the U.S.A.:

Popping in because I’m super interested in the breeding of variegated roses, looking to obtain one eventually for breeding purposes but I’ve found nothing so far unfortunately

The only two commercial varieties of variegated foliage roses I know of still around are Verschuren 'Verschuren' rose nurseries and Achievement. 'Achievement' Rose Good luck finding either.

I saw this variegated rose in a garden outside of Philadelphia in 2014. I forget whose garden it was in but I can likely track that down. He didn’t know the name of the rose but said it was always variegated and stable. Anyone have an idea??