I’m sure you will all agree that a Plant Breeders Deluxe Edition of Trivial Pursuit is long overdue and will be in high demand as we emerge from pan-dormancy.

To that end I am collecting questions to forward to Cartamundi which, as it happens, makes the board game at their factory two miles from my house.

I will go first.

What is the term for the original plant from which all other clones are propagated? 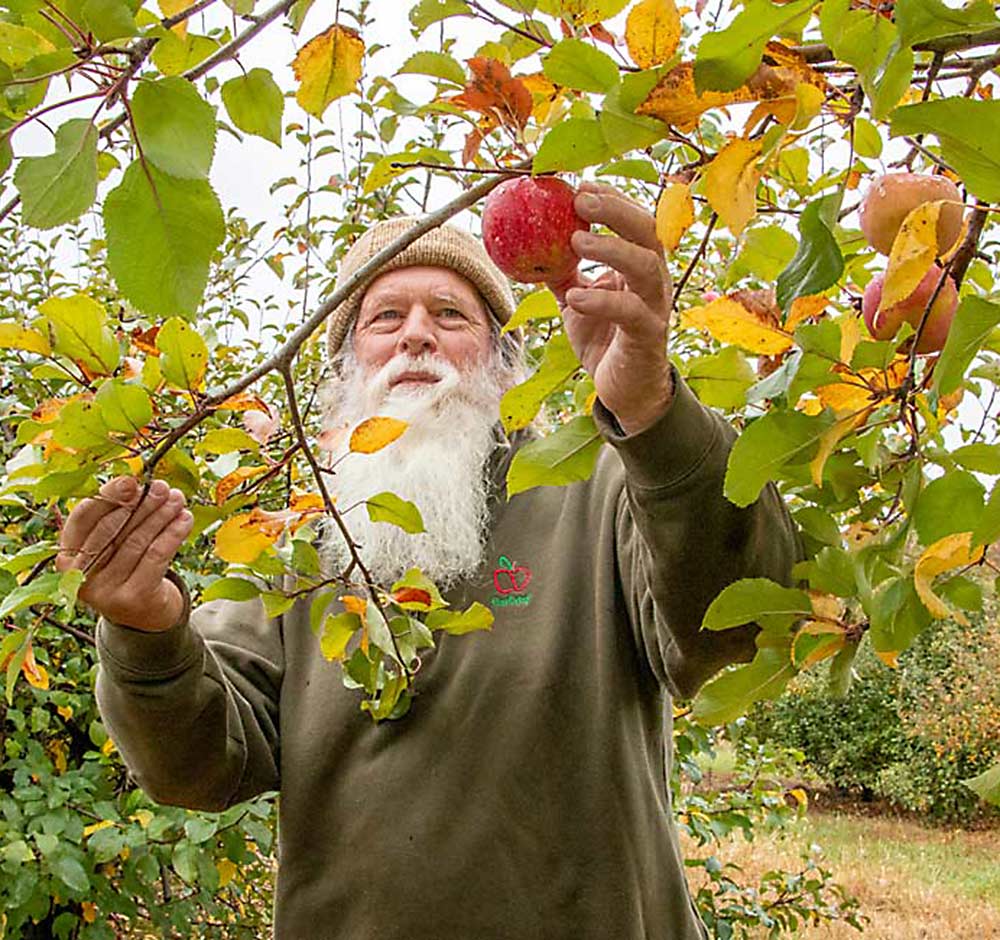 David Doud picks an apple from the EverCrisp

… ortet ? … l am still back at Honey Crisp having finally tasted one about 5 years ago … beats “Red Delicious”

Try a Kanzi. I love Honey Crisps, but Kanzi beats them hands down.

At CornelI University’s apple orchards a couple of years ago, I was delighted to run across a plump, red, half-sized little apple with amazing flavor and texture and a perfect name: Snapdragon. A new favorite.

What the “fruit” name thats only safe and tastes “really good” (l read) when its “bleated” … consider “fruit name” and “bleated” a two for one question.

Sorry its not bleeted … but “bletted” … for the wrong spelling the second answer … essentially “when totally or nearly decomposed”.

Dead give away now … fruit nearly commercially extinct by end of 19th century but a favourite of the “well to do” back in the day as a source of winter sugar.

There are a lot of honey crisp being grown along the valley here in the apple state. One we found that we liked better grown here (due to more complex flavor) was Ambrosia. Of course I am partial to stronger and more complex flavors. I’m wishing they could a lot of older varieties that had great flavor. A place grows them locally, but they are all used for hard cider.
Duane

Tried “fresh” Kanzi today, like the taste … slightly more tart … as l can believe its between honey crisp and pink lady on scale.

Ok, I’ll try a question. What crop developed by Luther Burbank is an oxymoron?

Good one, is speed, couple of guesses allowed with wikipedia assistance in the rules ?

How about a twisted bilingual answer …

Yes, his white blackberry, which tasted quite nice,but aged from “cloud berry” to “tobacco smoke stain brown” rather quickly. As one friend who was rather ‘descriptive’ in her speech described them, “those are really snotty looking”. I grew it for years in my old Newhall garden, having bought a plant of it from the Burbank Gardens in Santa Rosa. I shared it with a friend back east who won fairs with her jams and jellies. We figured being able to put a colorless black berry taste in them should give her a leg up on her competition.

Man, you guys are quick. Kim, is it really that homely? I was kinda hoping to succumb to its charms in the Stark catalog.

My boss was a wonderful lady of Greek extraction. Imagine a charismatic, brilliant (gorgeous!) Greek Candace Bergen. She ate EVERYTHING. I took her a baggie of ripe berries and she looked at it, INSISTING I eat some first, as she was convinced I was trying to poison her. She agreed, though, they WERE delicious. They looked slimy and gross, but they tasted great. They looked like a bag of snail eggs. Translucent Ivory Liquid colored little “eggs” and you can see the seed inside just as you can tell something is inside a snail egg. “Snotty”.

Wonderful story! …snail eggs? Ech. I’ll have to think about it…

Would Escargot eggs be more appealing? They are an historic, botanical oddity,something created BY Burbank. You NEED to grow it, however, be forewarned… it was THE most invasive berry I ever grew. I kept it contained in fifteen gallon cans sitting on the asphalt fire road cul de sac at the foot of the garden, until we had a La Nina winter storm event and FORTY inches of rain fell in that canyon (normal was 14") causing much erosion. There was a foot of silt on the road and it took forever for it to dry out enough to be able to be dealt with. Just enough time for Burbank’s White Blackberry to make great use of the wet soil and infiltrate everything in its path. I gave away pieces of that bloody thing for years! I do miss it, however.

What was the pro-ported (rumoured) midnight “great” botanical heist from the Conrad Pyle property?

Tough question as l don’t remember the answer … somebody might … something to do with a new rose?

Believe it was Lincoln … rumour though from a post on a supposed midnight excursion on another rose site decades ago. Never could substantiate but post made a good read.

As I read the story, one name of the purloined propagule came out as Uncle Joe. It was claimed that someone in the Wyant operation hired a skllled stem slicer. That’s quite a while back now.

Larry you should be awarded an honoury Opinel Classic #8 for excellent memory. More trivia.