White is supposedly the smallest, which is why I went with it. There are others, of course, but it seemed like it looked very nice.

White is supposedly the smallest, which is why I went with it. There are others, of course, but it seemed like it looked very nice. I do wonder if Rosa nitida is hiding in the background of them.

While researching potential bridges between Rugosa and Hulthemia, I came across Rosa Heterophylla.
This is a hybrid of Rugosa with Foetida. Foetida, as KarlK mentioned earlier in this thread, is closely related to Hulthemia.

Seems to be relatively small at about 3ft, and have some repeat.
Unfortunately there’s nothing to indicate it ever had any descendants, so perhaps it’s sterile.

While researching potential bridges between Rugosa and Hulthemia, I came across Rosa Heterophylla.
This is a hybrid of Rugosa with Foetida. Foetida, as KarlK mentioned earlier in this thread, is closely related to Hulthemia.
'Heterophylla' Rose
Seems to be relatively small at about 3ft, and have some repeat.
Unfortunately there’s nothing to indicate it ever had any descendants, so perhaps it’s sterile.

Harrison’s Yellow probably has better wood and is diploid. Foetida wood is pretty gross as far as roses go. Very prone to so many dormancy diseases. I have always felt it would be good on a new rugosa type. Pick out the yellows and suspected diploids. Let them self to their hearts desire. Pick out the rugosa repeaters with any yellow in them.

Interesting, thank you for your insight pacificjade!

I know its pretty hardy. I recall it growing with abandon in many places in my home area of the Black Hills of South Dakota. That’s blizzard territory. High winds and bitter cold, with red soil rich in iron from the hard metal mountain island. Its definitely a tough rose.

Just an update on one of the crosses I was attempting in this category. The Raspberry Kiss ×Jean de Luxembourg hips are all still hanging on.
However, I only have one hip left from the reverse cross (JdL×RK). I noticed the stem was yellowing two days ago, and today it started to blacken. I pulled the hip off and opened it, it contained nine seeds.
Of these, one crumbled into dust immediately upon handling. I soaked the others and got three floaters and five sinkers. 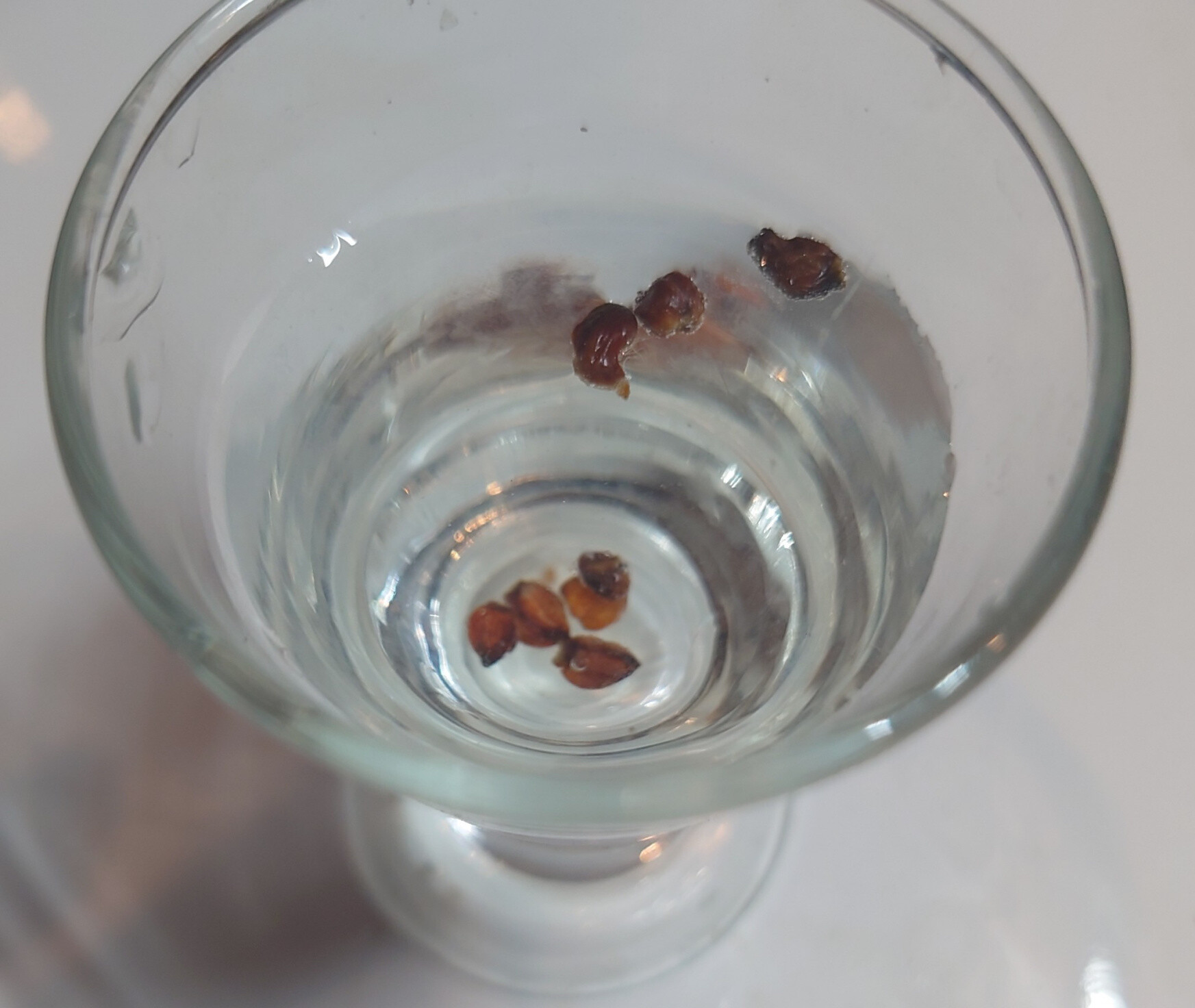 I put them all in a vermiculite bed moistened with calcium nitrate solution in the fridge. Who knows maybe some can still germinate?
I think the heat is to blame: the JdL plant gets a lot more sun than RK. In future I will probably try to either make my crosses much earlier in the year, or in the beginning of September.

If I were you I would remove the seeds from the vermiculite, rinse them off, shake off the water and put them in a baggie in the vegetable bin in your fridge. Throw away the floaters first, there is a 99% chance they have no embryos. Refrigerate them until January 15 before planting them out and, when you do, keep them between 45 degrees and 55 degrees F which will be just about the temperature in Malta then.

Thank you Don! I appreciate the advice and will try that! Just out of curiosity: is the vermiculite too water retentive? Why are they better off refrigerated in a baggie than in a small Tupperware with vermiculite?
I will follow your advice, just curious what the reasoning is. I thought the calcium nitrate solution was supposed to help with germination, but as I’m just a newbie I may have gotten it wrong. Thanks again for your insight!

The evidence for stratifying achenes bare in a baggie are largely empirical. Besides myself Jim Sproul uses this method, basically, you can search this forum for a post by him about it. Actually, I’m more likely to just extract the embryo manually but that’s something you’d need to practice before you risk crushing your only seeds.

Everybody has their own particular stratification voodoo based on their own experience so you’ll get myriad advice on it. Much has been written on this forum and in the RHA Newsletter.

Strip off hips of an Ernst Dorelle crossed with pollen donators as stems and hips yellowing and l was POd.

As an after thought tossed one in the pocket. Found it today and decided to cut open. Found one large, likely slightly immature seed in a small hip. It Titanic’d in the water test … oh well next year … problem is the Geschwind average bloom frequency for me is once every 5 to 10 years.

The one seed from a 10 year wait is heading to my deep south “Wall of Voodoo” Artic seed bank stratification ceremony. 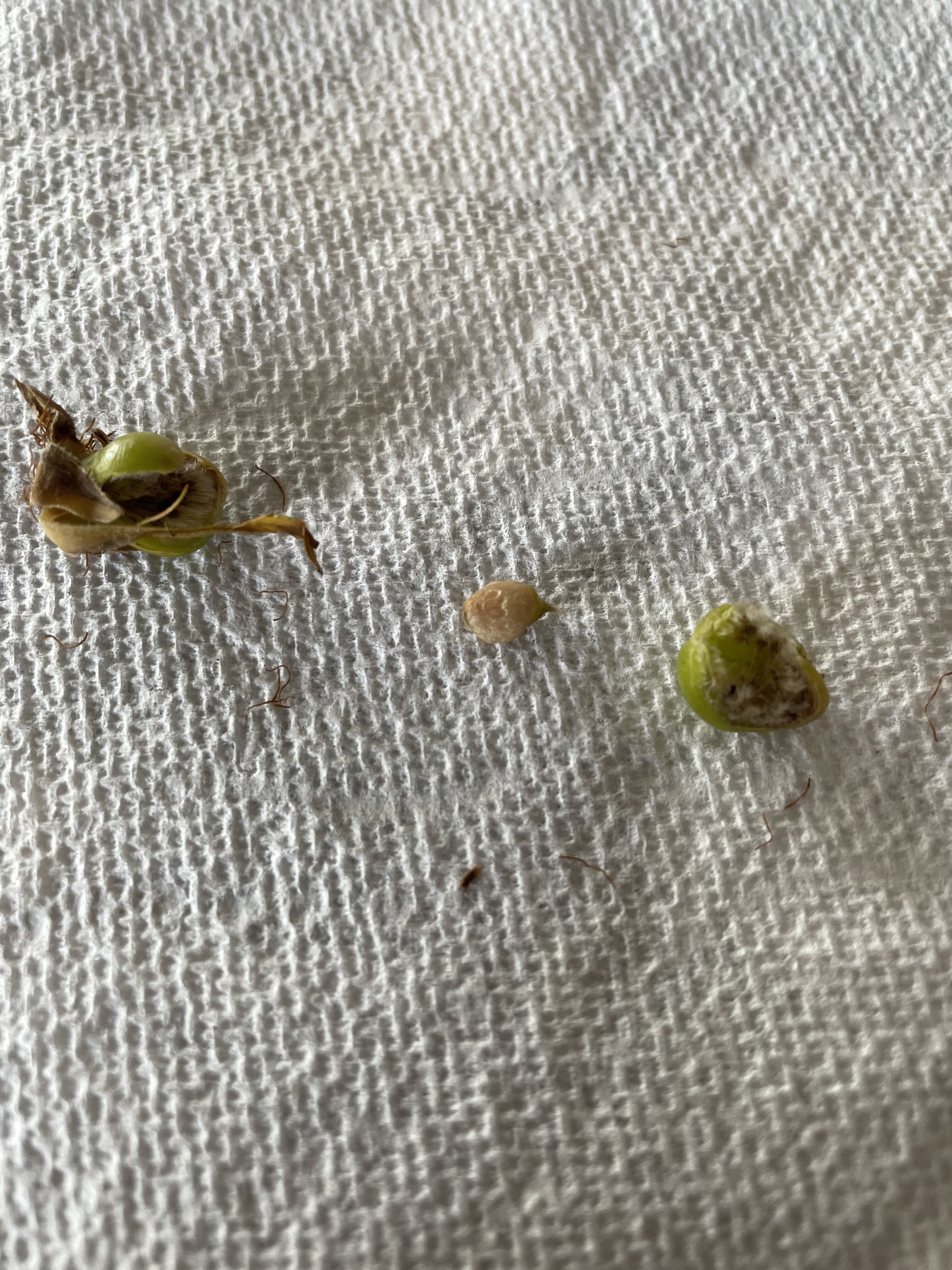 Very cool @karelbvn!
I’ll be looking forward to seeing how your crosses with Schneezwerg work out. Schneezwerg does seem like a great candidate for this!
Over here, I am cautiously optimistic as the 60 days mark nears, it seems the cross between Jean de Luxembourg and Raspberry Kiss took both ways (2/3 on JdL and 3/3 on RK) and hips are continuing to swell on both.
Just yesterday I put some pollen from Schneekoppe on Eyes for You. I didn’t do the cross the other way yet because I need to repot Schneekoppe soon, so I’ll try EfY pollen on her when she’ll be in her new pot. I’m not so sure about that cross taking but I’ll keep trying it, in my mind the result could be quite nice.
It’s comforting to know someone else is on this crazy journey too! Good luck

I’ve done 10 crosses with Schneezwerg as a mother this year. 5 of them gave me beautiful soft, ripe hips with nice seeds. One of these crosses is Schneezwerg x Eye of the tiger. It wasn’t the most fertile one. From 3 hips of this cross I’ve only got only 5 seeds. They’re in the fridge with my other crossings.

A failed cross was Schneezwerg x For your Eyes Only, also a Warner Hulthemia. I think it could work, but just hadn’t any luck. Other crossings with Schneezwerg and modern roses gave me hips with up to 20 seeds. So the hybrid Hulthemia’s are maybe not the most compatible partners for Schneezwerg. We’ve got a saying here: “Moeilijk gaat ook”

Thank you for sharing your progress with Schneezwerg as a parent with Hulthemias ! I hope those seeds will germinate for you!

I got some seeds from crossing Jean de Luxembourg and Raspberry Kiss (Eyes on Me). Total of 12 seeds from 3 hips (6, 4, and 2 seeds in each) from Raspberry Kiss as the mother. I wish I had more hips from this cross since @pacificjade mentioned the germination rate is very low with RK.
The reverse, JdL×RK, gave me 14 seeds in the only hip that reached the 110 day mark. They are all in the fridge.
I also had one hip from JdL×RK that I mentioned earlier in this thread which had fallen off early. Seeds were stratified for 8 weeks and are currently planted in a mini-greenhouse in cocopeat plugs (the Seedbooster kit I mentioned in another thread). I don’t have much hope for these, the hip fell off too early, but many of them sank even during a post-stratification float test so who knows.
The other cross I attempted in this category was Eyes for You × Schneekoppe (Snow Pavement), I only made it one way. There are two hips from this cross, still on the bush at 80 days now but they are very tiny.
It’s all still up in the air I guess. I like that saying, @KarelBvn , and I hope it really will work!

@SeasideRooftop Jean de Luxembourg is a nice rose, I didn’t know her. Probably has Rugosa a bit higher up in the lineage. It looks quite modern. But nevertheless a nice candidate. I look forward to seeing the results.
The tiny hips will have at least one seed or they’d abort I’ve noticed. So as long as they’re on the bush and ripening, you’re good. And even tiny hips can contain many seeds. I’ve done some musk crossings this year. Thought I’d better do a whole cluster of flowers or at least ten of those tiny little flowers per crossing, just to be certain. Eventually ending up with an average of 10+ ripe seeds per super tiny hip… I had my work cut out

Harvested the two hips I had from Eyes for You × Snow Pavement (Schneekoppe) at 115 days.
Hip 1 had two seeds: 1 floater 1 sinker
Hip 2 had 3 seeds: 2 floaters 1 sinker.
Disappointing harvest, I’ll make this cross again next year aiming for a lot more hips. My plants were still young this year, I hope for more abundant blooms to pollinate next year.
I will stratify all of them, even the floaters, and hope for the best. 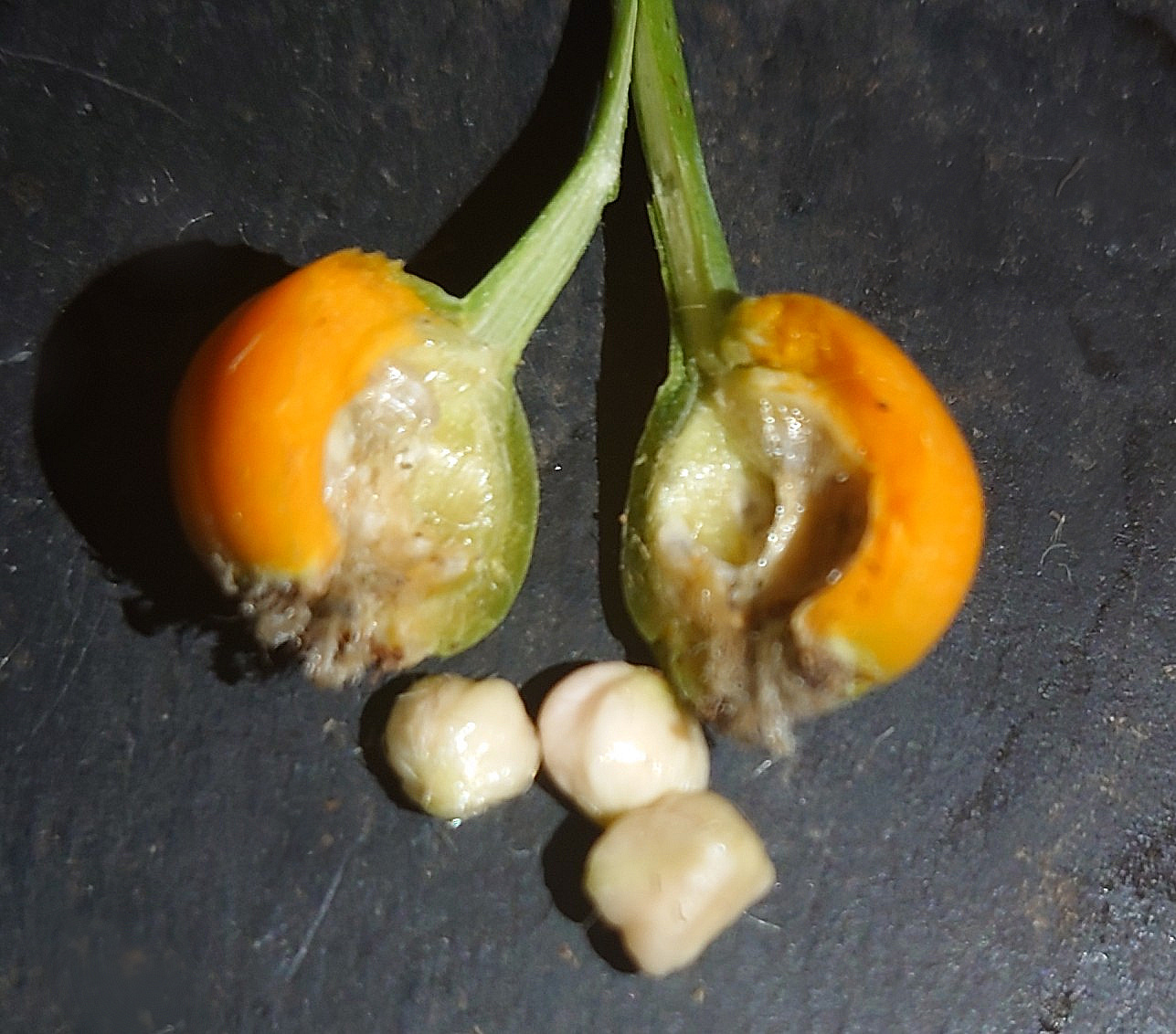 That’s actually a fair early result from limited pollinations, considering that the pollen parent is diploid and often tetraploid seed parents (as Eyes for You presumably is) might be expected to accept only unreduced pollen, which is usually produced at a relatively low rate. Since viable R. rugosa achenes often float, maybe there is reason to hope that your floaters will germinate better than expected, too. The ones in the photograph certainly look good. Hopefully your seedlings will give you even more encouragement to repeat the cross in greater numbers!