R. elymaitica - Persian species, not closely allied to any other species

What an interesting species !

Very little known and barely cultivated. Maybe our scientists have more of a chance to locate this rose. Certainly, it could provide valuable insights through scientific studies in terms of use for any breeding purposes. 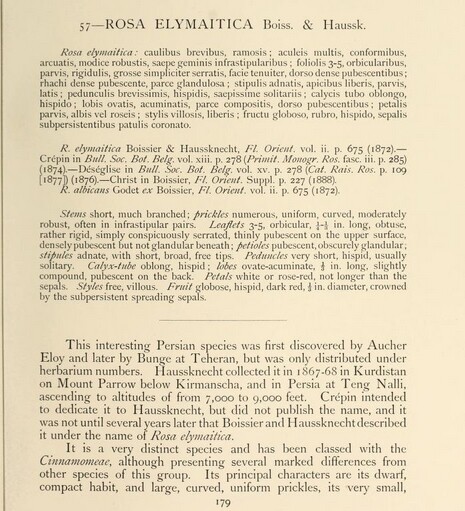 Judging by the primitive spoon leaves and the native range I would guess that R. elymaitica is a close relative of R. hulthemia hulthemosa, from which the ‘blotch’ originated at the hands of Cocker and Harkness. Surprising in that I never suspected there to be any close relative to hulthemia. Perhaps this is because of the hyperbole around the heroics involved in the initial introgression of the blotch. At any rate I had always assumed hulthemia to be a one-off.

Compare the leaves depicted in this photo with those in the image which link you posted.

use for any breeding purposes.

A natural substitute for barbed wire for use in desert ranching?

All smarm aside, have a look at these articles before diving into a breeding project with Rosa elymataitica.

It does raise the question of whether there are other related species. I forget the term for it (reticulation?) but many plant species belong to a group of related species that cross-hybridize at their geographic overlaps. R. moyess, R. davidii and R. macrophylla are part of one such grouping. Likewise R. foliolosa, R. nitida, and R. palustris are part of another such grouping.

I have doubts about the picture of the Rosa persica leaf. It looks like a leaflet of a R. persica hybrid. This picture here shows the very leathery thick unique leaves of the species R. persica: 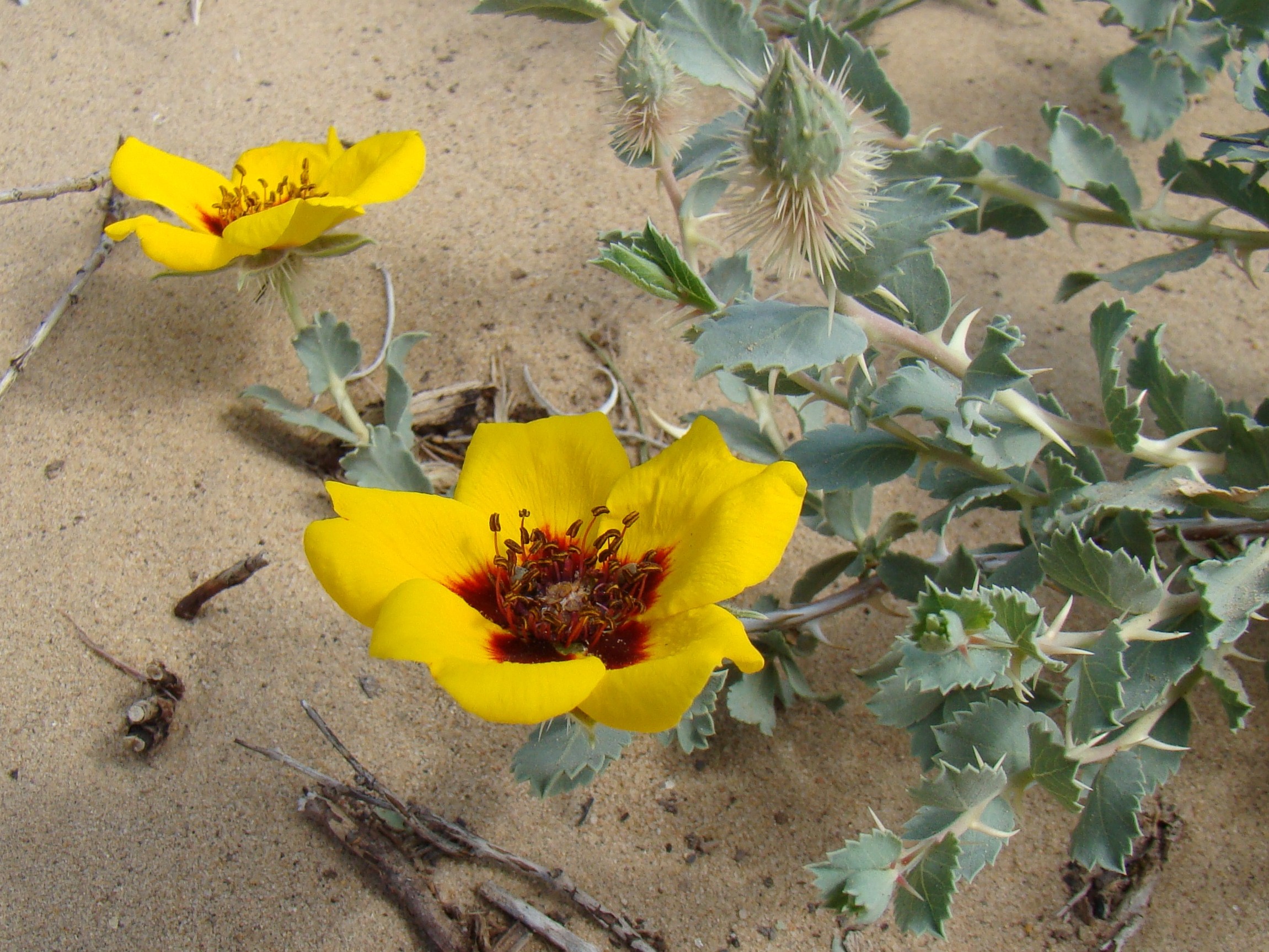 I’ve looked up a paper about Turkish roses. The R. elymaitica gets a Section of its own. It looks like it is on its own. You can download the paper here: https://www.researchgate.net/publication/307802764_General_Appearances_of_Turkish_Roses
Page 36.

And here you go

the mother load. I’ve done a deep dive in Google. I scientific study, some Persian original text and English translation. Apparently they also classify it under the Caninae Section. scientific studies and all.

Page 94. There are 12 mentions of Rosa elymaitica. Apparently it is closely related to R. boissieri, R. orientalis and R. villosa.

Cluster analysis of all section Caninae showed an
extensive variance between seven Iranian species of the
section. There are two major cluster; populations of
R. boissieri and R. elymatica separated from the others in
the first cluster. The second cluster contained some sub- clusters that separated most of the populations of
R. orientalis and R. villosa. Population of R. canina, R. iberica, and R. pulverulenta distributed in both of
main groups and multivariate statistical data could not
segregate them. Polyploidy and cross pollination resulted
different hybrids between some species of section
Caninae as one of the extensive variation. The results of
ordination confirmed cluster analysis data (Fig. 6). Factor
analysis of morphological characters revealed that, the
first seven factors embraced about 60% of the total
variations, in which gland on adaxial leaflet, form of
sepal, hair on the adaxial leaflet, and pedicel form
could separate R. boissieri, R. elymatica, R. orientalis, and
R. villosa. Similarity between R. boissieri, R. elymatica, R. orientalis, and R. villosa was also considered by Flora
of Iran (Khatamsaz 1992). Morphometric data showed
some diversity in R. pulverulenta but in Flora of Iran
these species are placed near to each other which is not
supporting our data. Jokar et al. (2008) reported
R. pulverulenta is a hexaploid species. Moreover, there
are some reports on hybrids of R. pulverulenta and other
species such as R. pimpinellifolia (Khatamsaz 1992), and
R. boissieri. These data confirmed the diversity of
R. pulverulenta as our data showed. Morphological and
molecular studies between two subsections of Rosa
showed that, when different closely related dog-rose
species are present at the same growth site, the genetic
structure may show more differentiation between
localities than between taxa as it was shown in some
populations of R. pulverulenta in morphological
characters (De cock et al. 2008). From an evolutionary
point of view, the canina meiotic system has probably
developed fairly recently (Lim et al. 2005), supporting
the idea that, the dog-roses are rather young (Atienza et
al. 2005). Hexaploid base of R. Pulverulenta caused to
get equal molecular characters from their parents (not
maternal) and it could be reason of broad variation of
their populations.

Özçelik didn’t do much in the way of actual research. He basically inventoried other collections and scrapped specimens into his own repository. Pretty typical of his other papers, see his web page at

The paper is a polemic call to action. He wants to set up a protectionist scheme ("It is needed to register as commercial mark the local roses of Türkiye immediately. Illegally taking them out of the country must be prevented. The countries these roses taken to should contribute the subject and it is a necessity of International Biological Diversity Contract for those countries. "). Note, too, that SDU has a constituency in its local natural products industries.

Not that any of this detracts from the work. It’s just that I’d like to see, say, a dendrogram showing how elymaitica relates to hulthemia, and to any of the other roses he sort of mentions as being Turkish natives.

The R. elymaitica gets a Section of its own.

Koobaz et al. worked strictly with morphology which is to say they didn’t do any genetic analysis. One of their cited references include elymaitica as a canina which I have serious doubts about. They also include some putative canina/elymaitica hybrids in their study population which I’m wondering then how they tell the difference then if elymaitica is actually a canina).

My take-away from Koobaz is that Iran has lots of canina reticulation going on in it’s wild rose populations but that it otherwise says nothing at all about elymaitica beyond a summary morphology which may or may not actually be of elymaitica/canina hybrids.

Again, I’m not dissing their work but it doesn’t help define elymaitica’s position in the evolutionary network. Unless I’m missing something.

It could be that R. elymaitica has Hulthemia in its make up. But still, I do see much more resemblance to other species roses also in the same region then to the pure Hulthemia. 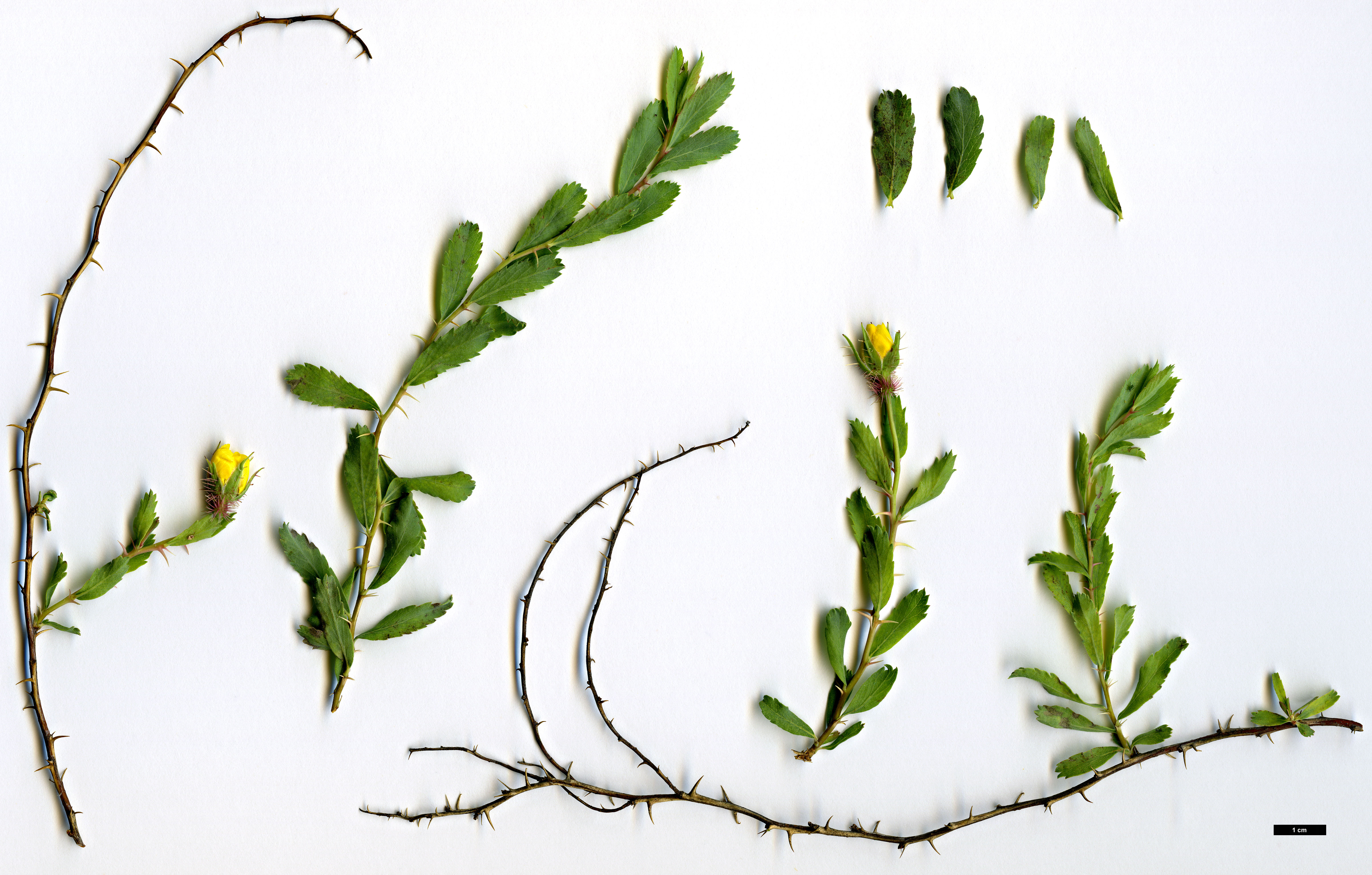 I see the resemblance however with the grouping of the spines/prickles. Still in the area you also have R. gallica, R. beggeriana, R. canina, R. dumalis, R. heckeliana, R. pisiformis, R. foetida and R. hemisphaerica, maybe some more.

Some references say R. hulthemia hulthemosa would be a hybrid between R. hulthemia and another species rose. R. hemisphaerica, R. clinophylla or maybe other forms. Once you start analyzing hybrids it gets really tough to be certain of wich roses they relate to. We’ve a similar issues here in our flora with caninae hybridizing in all kinds of ways.

It would be nice indeed if it would be possible to compare genetics in a way to create a correct “tree” to learn more about the origin of rose species.

I thank you both for the effort and the lively discussion. Nevertheless, I still stand by my opinion that R.elymaitica would not be unattractive in the end.

It would be nice indeed if it would be possible to compare genetics in a way to create a correct “tree” to learn more about the origin of rose species.

Oh yes, that would really open doors and create clarity.

On ncbi there is something called genome workbench and as long as rosa species sequences are on ncbi, you can make a phylogenetic tree on there. It would take a little time to learn how to use it though. But there are tutorials available on the website as well. Im just not sure how much genome sequencing for roses has been done.

Wow! Thank you for sharing. Found they have 5 roses of which they have those sequences. I think

I’m not familiar with genetics on that level, only the really really … really basic stuff.

It looks realy impressive. You can zoom in and out on parts of a genome.

This resource organizes information on genomes including sequences, maps, chromosomes, assemblies, and annotations.

With R. chinensis they split it in chromosomes:

This resource organizes information on genomes including sequences, maps, chromosomes, assemblies, and annotations.

Fun to watch, but it is like trying to read Chinese.

Great ! So many thanks for this amazing information.

I only knew BOLD: The Barcode of Life Data System (www.barcodinglife.org) before. However, access outside of a well-known institution is very limited.

The Barcode of Life Data Systems (BOLD) is an informatics workbench aiding the acquisition, storage, analysis, and publication of DNA barcode records. By assembling molecular, morphological, and distributional data, it bridges a traditional bioinformatics chasm. BOLD is freely available to any researcher with interests in DNA barcoding. By providing specialized services, it aids the assembly of records that meet the standards needed to gain BARCODE designation in the global sequence databases. Because of its web-based delivery and flexible data security model, it is also well positioned to support projects that involve broad research alliances.

It’s not very easy to find your way around, but the barcodes of many wild roses are available.