Seeing the link concerning R. bracteata incompatibility, I thought I might write and inquire as to folks’ experience with the rose species R. banksia.

Since I first became interested in hybridizing, I have fantasized about using this disease-free (for me) species to develop a line of recurrent yellow roses.

R.b. Lutea is disease-free in SE Louisiana where most species get BS severely, and apparently the (presumably fertile and fragrant) single form is bullet-proof as well.

The only R.b. hybrid I am really familiar with is Purezza, which, alas, is derived from the single white morph crossed with “Tom Thumb” as I recall.

Does anyone have any thoughts on using R.b. Lutescens? Other banksia? Thoughts on maintaining/reinforcing yellow?

I own it. It is beautiful in the spring. I have it climbing up an Austrian Black Pine. I have tried using it in breeding. The issues are the same as with trying to use Rosa primula: because I live in a temperate rainforest, those 2 roses blooms so early that pollenation is nearly impossible with all of the moisture, humidity and rains in May. I get 100% hip failure rate with 1 or 2 OP’s on both species.

This year, however, both species will be applied to Baby Faurax because I can save the pollen and put it on in June when Baby Faurax blooms. Some of the R. wich hybrids would be preferable, but they bloom even later. If I had a greenhouse, which I dont, I would buy Sunshine and hybridize for a recurrent diploid yellow. Also, along with Baby Faurax, I may try Rosa primula and rosa banksia lutescens (which I have to freeze to store in order to use) on Danae and Trier. However, I fear this may bring in mildew to these two bomb-proof species roses.

Banksiaes are BS free and PM tolerant that is if environment does not suit them they are quite PM succeptible. Particularly as seedlings they are often very heavily hit.

It is an example of seedlings that allways overcome initial desease.

Lutescens is fully fertile if not easy to germinate.

Accidentally I found that year old seeds are quite easy.

Surprising and non conventional: when crossed to Chinas recurence is quite frequent in the F1. Said progeny is fully fertile if the China is diploid.

Combining it with the early yellow pimps is something I would like to see. At least here is the possibility of gracefull plants with nicer yellow flowers.

Philip: Hey, neighbor. I, too, live in Southeast LA (New Orleans) and my daughter Adair lives in Alexandria, LA. I have found the banksia rose to be impervious to everything but my efforts to cultivate it – I killed the one that I had that was 80 years old and as big as a tree when I fertilized it for the first time in its 80 years. It has a unique charm associated with old southern gardens, but I wonder if those qualities are worth the space in a breeding program on a non-recurrent rose with unexceptional color and form. Its beauty is in its mass spring blooming, and I fear that in a recurrent form the repeat would be sparse after the initial spring rush. What are the chances of getting something that would give at least a second big rush in the fall – then it would be worth it.

That was my feeling, Pierre, which is why I elected to say Baby Faurax since it is hardier than China roses are, but diploid and descending from the same genetic (SE Asia) region as the China roses. I do have a China rose, but it is a picky breeder, and I cannot imagine it would be hardy for many more zones below me in winter temperature.

Jadae, ‘Raymond Privat’ has been masquerading here in the states as ‘Baby Faurax’, just FYI.

In fact I don’t know a true source for the original, ‘Baby Faurax’

I think I got mine from Hortico. Mine is grafted. I looked at the pics of RP on HMF, and mine doesnt have that stuble on the stems. shrug

Does anyone know of a strong diploid yellow which is recurrent? I would like to reinforce the yellow without introducing a susceptibility to BS while obtaining a recurrent bloomer.

Robert, you must have burned the heck out of the poor bugger! I didn’t think they could be killed here without a little effort! (What area of NOLA do you live in? With a banksia that old post-K, I assume you are on the sliver by the river?)

Your concerns are understood, but one could say the same about every species from which ramblers were ever bred. Imagine if wichurianas were never used. And to have a disease-free yellow in our climate is otherwise unheard of. Yes, there is a susceptibility to mildew in cool moist areas lacking full sun and excellent air circulation, but I have only seen mildew on chinas here, and it is essentially a non-issue.

Sunshine is the only one I can think of. But it isnt the most vigorous or easy to find rose.

Jadae, which “sunshine” would that be?? LOL.

I do rather wish that HMF had ploidy under its advanced search. But I have no objections to a triploid offspring if it’s good enough – even as a potential dead end!

(BTW what, presumably, is ploidy of Purezza? – Tom Thumb x R. b. banksiae?)

Also, Jadae, I would assume that you would want to use banksia as pollen parent regardless, no? I wouldn’t worry so much about mildew if you target a warm-climate market. Danae is a good one. (She is also a rose I would like to hit with Mutabilis.)

I like your idea of r. primula, but why this rose over other pimpinellifoliae (Golden Chersonese, Harrison’s Yellow, etc.) with more vivid yellows? Obviously, if they took, they likely would still be non-remontant, and thus such is not a cross I’ve seriously considered pursuing, however, I’ve contemplated such…

(Is there a pimpinellifolia/china hybrid cross out there?? The banksia, from what I’ve read, are willing enough to throw remontants from chinas that a non-remontant F1 from a china might be worth experimenting with…)

I have to use banksia as pollen. I do not have a choice due to my climate when it is in bloom

I would use Rosa primula for several reasons:

It isnt closely related to most of the above roses. The foliage is awesome (disease free here and scented), it is hardy, the flowers have a unique sweet scent and it would add something new to modern roses.

If I had Golden Chersonese, I would consider it. I wouldnt use Harrison’s Yellow since the R15 line seems superior.

Leonie Lamesch might produce yellow blends, too. But it is a picky seed setter.

It’s not derived from lutescens, but this is what a yellow banks hybrid looks like. Taken this morning. 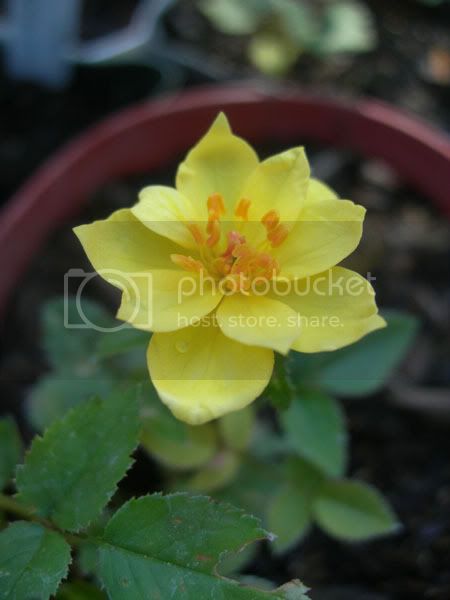 That is gorgeous, Robert!

Thanks, I’m pleased with the color. It’s a mini.

Now that I’ve got the color with repeat I’ll start working it back into the cluster flowered types. One step at a time.

It seems I will have very vew flowers of lutescens on my two little plants here this season, so its a good moment to think of something that might fit.

How far removed from R.b. is your yellow, and how well is resistance to BS maintained?

Jadae, have you grown both sunshine and its parent William Allen Richardson? (WAR had come up for me in a search for a hypothetical potential partner for R.b.l. I did last week. I was wondering in what ways Sunshine might be superior.)

Pre-Katrina I had what presumably was a R. xanthina spontaneae, which I think could have actually been R. primula. I did enjoy the fragrance of the foliage, but it was not disease-free for me. (It did shed diseased leaves very quickly keeping it relatively clean, but my impression is that mixing species with different disease-shrugging strategies is not a good idea. R.b.xR.p., for instance, would likely yield a semi-evergreen plant with a weakened cuticle which would tenaciously hold its diseased leaves and thereby spread the disease in its canopy.)

No, but I do have access to Trier, Danae and Leonie Lamesch. I keep wanting to order Sunshine, but it is never available when I have the excess money.

Hello Philip: Sorry to be so slow in responding. I live in the snake by the lake which also did not flood – Lakeshore Parkway to be exact --my front door faces the levee to Lake Pontchartrain. The snake by the lake is not quite as large as the sliver by the river, but the same principle applies. There are three basically high areas in the city – the snake by the lake, the sliver by the river and the extension of the Metairie Ridge down City Park avenue and from there out to New Orleans East – it is actually the final tappering off of the Appalachian Mountains! Y’all have persuaded me to rethink Lady Banks – I advised my daughter, Adair, that she might like to plant one in her garden in Alexandria in the spring. It is just that I have never gotten over the shock of fritzing my great grandfather’s magnificent old Banks rose – I assumed that because it was tree size it would benefit from a tree size dose of fertilizer – WRONG!! Where are you in Louisiana?

Bob, Adair will find the banksiae make a spectacular, albeit short show in early spring. If she has the room for it, it is well worth it, to my mind.

The single-flowered Lutescens is hard to find, though the N.O. Botanical Garden in City Park had one pre-K from which they sold cuttings. I’ve never seen (nor smelled, obviously) the thing in bloom, but it is apparently quite nice, and this form produces pollen. I believe, however, they lost the plant in the flood waters.

I am actually in N.O. on the sliver. Alas, I gutted my house pre-K for renovations, and good, affordable contractors are hard to come by these days. Go figure! LOL

I got my lutescens from Vintage. It makes the air smell sweet. Everyone thinks the rose is climbing bamboo

and are shocked to learn that it is a rose, LOL!