OK this may just be my inexperience talking here, but is there any reason one couldn’t develop a reblooming alba hybrid? This spring I kind of fell in love with Felicite Parmentier, and more recently I noticed that Konigin von Danemark is absolutely without blemish when everything else around shows at least a little black spot. Both are supposed to be cold-hardy. Anyway, the idea would be to breed these two, say, with equally cold-hardy reblooming roses, selecting the offspring for health, and for that alba look and fragrance, eventually crossing the f2s and selecting for rebloom. Surely somebody has tried this. What am I missing? Ploidy issues?

I expect ploidy is less problem than linkage disequilibrium. Getting the rebloom gene transferred to all n loci on whatever chromosome takes multiple generations. Getting it there while not dragging along traits you don’t care for is a lot harder. In principle there is independent assortment of traits in Mendelian genetic systems, but in practice general happiness of the plant depends on balancing a whole set of traits together. Consider the Pernetianas as your model. Most offspring will be thorny, once-blooming but catch the disease susceptibility from (in your case) the remontant parent. If we had marker assisted selection (some way to identify the rebloom gene quickly in every progeny, and estimate whether it is present in 1,2,3 copies), then we could make more rapid progress by focusing on only those offspring carrying that essential trait. Then you could select for whatever you consider is characteristic of albas from amongst those. If you got say 100 F1 with 2 copies of the gene, you might find 5 that you like the look of, and cross those repeatedly if they aren’t sterile.

Look at Austin’s Heavenly Rosalind, Windflower and The Alexandra Rose.

This is kind of what Rolf Sievers in Germany has done. Unless you meant that, to be classified as true alba, the rose must be F1 descendant of an alba rose. Sievers has produced many beautiful non-repeat blooming F1 albas (the Blush series), but whether his later reblooming hybrids are “enough” alba-like is a matter of taste, I suppose. I also have a hybrid of Maiden’s blush that I have named Tommy.

I’m collecting self-pollinated seeds of Tommy and and crossing it with John Davis and Lambert Closse, among others, to get a hardy repeat blooming hybrid. I haven’t tried Sievers’ repeat blooming varieties but I doubt they would prover hardy in Finland. They have a lot of HT blood.

This is a colour which you would not associate with alba crosses, but here it is . A Hybrid Kordesii X Alba Maxima.Repeat flowering . 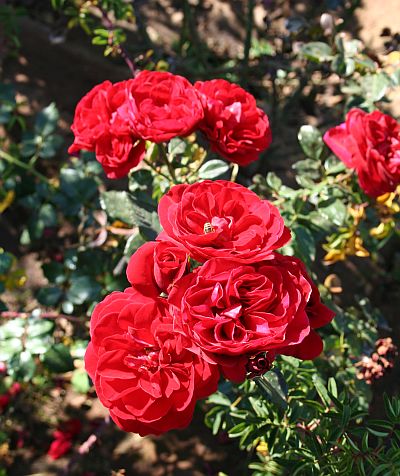 I work with Rolf Sievers. We are breeding with Albas and have repeat-bloomers. Often there are the F2-generation.

This website is for sale! country-flowers.de is your first and best source for all of the information you’re looking for. From general topics to more of what you would expect to find here, country-flowers.de has it all. We hope you find what you are...

I worked with Maiden´s Blush too. My Maid Amelie is a repeat bloomer in the F1. I was very amazed. Plant Search

The next Alba-hybrid is Alenica. It`s a seedling of Maxima. I was very amazed too, because after a few years suddenly Alenica is a repeat-bloomer. You can see Alenica on Rolf Sieves Homepage -thread: Andrea Braun Alba.

This website is for sale! country-flowers.de is your first and best source for all of the information you’re looking for. From general topics to more of what you would expect to find here, country-flowers.de has it all. We hope you find what you are...

My experience with breeding are: sometimes the seeds don´t like to germinate or the seedlings are lack to vigor.

Why do you think so?

As you can see from the results from the other members, it can make a difference on how fast you recoup repeat bloom by which Alba you use. Andrea and Warren were able to get repeat in the first generation but usually it’s going to take two or three generations to get repeat bloom. Remember also that Albas have unbalanced meiosis and it will make a difference if you use them as the pollen parent or the seed parent.

I have a repeat blooming second generation “Alba” (Carefree Sunshine x (George Vancouver x Alba semi-plena)) that doesn’t look Alba like at all. It is small and low growing with very double flowers and It has good disease resistance and hardiness. The pollen parent, (George Vancouver x Alba Semi-plena) was tall,lanky and once blooming, much more Alba like but with magenta colored flowers.

Paul when I used Alba’s in breeding programmes , it was as a pollinator. I think my reason for doing so was the Canina unbalanced configuration. The plant growth of this cultivar which I listed here is very short (2.5 ft) with stout growth, after winter pruning the groth reaches a certain height and densisty and does not get any bigger. Completely different from both parents. What I really like is the Zig Zaging effect of the inner petals of the bloom.

Thanks everyone for this fascinating info. It’s very interesting to see what everyone is doing, and to see what diversity the Albas can produce.

I don’t really understand how A. Maxima or Maiden’s Blush can produce rebloom in the F1, given their ancestry. Wouldn’t they need to have a recessive rebloom gene to pass on? Where does that come from when their parents are species, at least on HMF?

Also don’t have a clue what unbalanced meiosis means but will do some reading and figure it out. Very interesting stuff.

Warren,
I like the looks of your rose. It has a good color and the zigzag pattern gives it a quartered affect. It’s interesting that it is only 2.5 ft tall.
I used Maidens Blush pollen on Carefree Beauty this year. CB wasn’t my first choice but it was blooming when I collected the pollen. I suppose one could use the Alba as the seed parent if they then use the offspring as the pollen parent. Theoretically that pollen should have the possibility to pass on repeat genes as if the Alba was the pollen parent of the F1 offspring.

Donald,
I don’t know if anyone really knows what the parentage of Alba Maxima and Maidens Blush is. They could have repeat blooming Damask in their lineage. Also it has been noted on the forum where repeat blooming seedlings have come from plants that one wouldn’t think should have. Genetics can be a tricky thing.

I propagate the seedlings after a year ago on Canina Inermis. Sometimes after the propagating the blooms have more petals than the seedling.

I don´t have offsprings of Persian Yellow. The hips fall down. Persian Yellow is not a very good pollen parent. The most hips don`t have seeds. It´s very difficult.

Jukka- your “Tommy” is quite beautiful. I’m curious about its parent, Anna. Anna appears to be the offspring of an Ag Can rose, yet I’ve never heard of it and it doesn’t seem to be available over here. Is it common there? Is it healthy?

[quote=“jpkrvi”] I also have a hybrid of Maiden’s blush that I have named Tommy.

I’m collecting self-pollinated seeds of Tommy and and crossing it with John Davis and Lambert Closse, among others, to get a hardy repeat blooming hybrid. I haven’t tried Sievers’ repeat blooming varieties but I doubt they would prover hardy in Finland. They have a lot of HT blood.

I’m no expert, but I wonder if using something like R. fedtschenkoana or Autumn Damask might be used to create a little bit of rebloom while maintaining the old look. The trick would be getting the parents to cooperate - more true for Autumn Damask than R. fed. Rebloom probably would not be that spectacular but after a few generations of selecting for rebloom it might improve. If one didn’t mind adding a little china rose into the ancestry, using Austin’s roses might not be a bad idea either. This discussion does give me a few more ideas to try for myself.

Hi Jukka,
Ihave a question: can you send me next jear Pollen from your wonderfull Alba-Hybrid “Tommy” and “Helvi” ??

Hi Andre Carl,
In the development of more blooming roses without china blood we’re at it.
See our website country-flowers.

I’m thinking of pairing an Alba with Morden Blush, which already has the look. I think it was mis-classified as an Alba at one point. You’d have to try to get clean offspring. Another candidate would be Lambert Closse. Many of Bonica’s offspring also seem to be blush coloured with 40+ petals, and it reblooms like a fiend.

Donald, Anna ('Anna' Rose) is one of four roses released from a very small non-commercial breeding project in Sweden. They all have L83 from Ag. Can as parent and I don’t think they are available elsewhere than in Scandinavia. I ordered mine from Flora Linnea in Sweden. Anna has quite small flowers, is very thorny and has quite poor, uneven growth habit so I don’t have it any longer.

Rolf, sure I’d be happy to send you pollen of Tommy. Helvi (Therese Bugnet X spinosissima plena) unfortunately seems to be completely infertile both ways and I haven’t managed to get any pollen from it. I will still try next summer. (I’m also using as pollen parent a rugosaXspinosissima hybrid named Ristinummi, which, I’ve found only sheds pollen for a very brief period of time when the blooms are not fully open.) Please, send me a private message for details.

Mr Sievers,
I am new to this forum so I hope not to make any faux pas. I have had two divine Rolf Sievers roses, Royal Blush and Crimson Blush, for 20 years. Royal Blush is my favorite rose of all roses I have ever grown or seen. Such intoxicating fragrance! I purchased these from Heirloom Roses here in Oregon, on the west coast of the US. It’s difficult to find any of the other ones that Heirloom sold that are listed in their 1998 catalog (Crimson Blush, which I saw listed later as Red Blush; Lemon Blush; Morning Blush–“extremely profuse spring bloom with an occasional bloom during the summer”!!!; Royal Blush; Tender Blush; and White Blush). Last year my Royal Blush had “an occasional bloom” after all the other flowers had bloomed. I have had this rose for 20 years and have never seen a rebloom on either of my Blush Series roses.

I see there is a “Golden Blush” for sale, origin listed as Germany. Is this another in the series? I saw the same photograph used in Heirloom’s catalog for Royal Blush used for a different named rose.

Each spring I live for the blooming of Royal Blush. Such magnificent perfume! I have made liqueur with it, rose syrup, and put the petals into soap.

My deepest thanks and gratitude for the creation of these roses.

Reblooming Albas? Dream on, world; dream on! One day!

I have Morning Blush (Maiden’s Blush × Hamburger Phoenix) and used it the first time this season as a seed parent and using Whimsy as the pollen parent. I’m hoping to get a smaller plant that repeats. I think F1 would qualify as alba hybrids, no? Maybe cross back to Morning Blush…