'Minette' - an overlooked rose for frgrance?

‘Minette’ (Vibert, 1819) is cold hardy to Zone 4 and while it winter kills somewhat in Zone 3, it usually produces a good quantity of medium pink flowers of good form. They are also quite fragrant. The compact shrub has attractive foliage. Yet this tough rose (long lived where ever it gets established) apparently has no progeny, even though it’s fertile both ways. It’s a good producer of pollen.

In a Zone 3 climate where I live, for developing fragrant roses, we are pretty well limited to Spinosissimas and Rugosas, so I’m thinking that ‘Minette’ might be valuable for this purpose. The key though, I think, is to first work backwards before going forward using, for example, Rosa acicularis or a Rugosa having 50% Rosa woodsii in its parentage to develop a very cold hardy breeding line. In the meantime, this year I’ve used ‘John Davis’ and ‘Hansa’ to see how the progeny will perform and, in case of the latter, smell like.

Has anyone tried ‘Minette’ in a breeding program?

Thornless, fragrant, disease resistant and purportedly the hardiest and most durable of the albas… What’s not to like?

Sounds like a winner to me. As a southerner, however, I’m really not familiar with the class. Are there many albas that have played roles in today’s roses?

There’s a comment about it on HelpMeFind that suggests the rose currently being grown under this name is the same as one of the roses sold as “Banshee” in the US.

Is the Minette of Europe not the same as the Banshee of North America?

If so, this quote from Leonie Bell’s old article may be relevant: “Mr. Wright then told how he’d tried to incorporate Banshee into his breeding program, without success, for when at all double, the offspring invariably balled.” While this is unwelcome news for the potential Banshee breeder, it leaves some questions unanswered. What was Wright crossing it with? Did he even get as far as trying any F2s? Did he consider a less double version of Banshee to be a failure, for reasons another breeder might not?

I don’t think that the murky group of R. lucida/R. rapa/Turneps has gotten sufficient attention from breeders, and like the idea of preserving and broadening that bunch, even if there’s a balling problem to work out. If I lived far enough north for it to do well for me, I’d probably try breeding it too.

‘Minette’ is not the same rose as ‘Banshee’ in Canada. The latter, of course, is notorious for the flowers balling. 'Minette’s flowers in my experience don’t ball. Furthermore, ‘Minette’ is likely much more fertile both ways compared to ‘Banshee’. Using ‘Banshee’ as the pistillate parent, for example, I never could get it to set hips using ‘John Davis’ as the staminate parent. It appears I’ve had no problem in that respect with ‘Minette’ (pollination done a couple weeks ago).

For those of us who have not grown both, or perhaps not either, could you elaborate? I plead ignorance about this rose beyond book larnin’, and would love to hear your feelings about whether Banshee seems like a clone variant of Minette, or whether they seem more like siblings, half siblings, or whatever.

I haven’t seen either ‘Minette’ or ‘Banshee’, so I can’t comment on any possible affinity. But I wanted to share Wright’s statement.

Wright (1940):
“This year a bud sport [on Banshee] gave a new form, a semi-double rose of much deeper pink and free of balling, and with the loss of petals, fertility was recovered. As soon as I found this plant I attempted to use it in crossing, and placed upon its petals pollen of a wild rose that happened to be in bloom at the same time.”
http://bulbnrose.x10.mx/Roses/breeding/Wright/Wright_hardy.html

Wright’s sport may not be ‘Minette’, but it raises that possibility that ‘Banshee’ might also have produced a less double sport for someone else … assuming ‘Minette’ and ‘Banshee’ are similar in other characteristics.

“I regard the Banshee as a strain. That is, they are likely hybrids with the same parents, and might all have come from the seeds in a single hip. Within the strain these variations can occur.”

Considering the similarity of the ‘Minette’ and ‘Banshee’ shrub and flower characteristics (except the latter has very double flowers), this could very well be. Or as Karl has pointed out, ‘Banshee’ may have sported to flowers being less double. Indeed, Percy Wright claimed he had this experience.

One thing I do agree in this article is that ‘Banshee’ is unlikely an Alba or Centifolia rose. Rather, it’s likely it is a Damask. Being a more primitive rose, this would account for its suckering habit. And also for its very fragrant flowers.

Three of my last ‘Minette’ flowers opened this morning, and I had Rosa wichurana pollen in my hand for pollinating my last ‘Aylsham’ flower, the shrub growing next to ‘Minette’. So I also gave ‘Minette’ a shot of Rosa wichurana just for the fun of it. Perhaps this is the first time this cross has been ever made.

Can anyone speak to Minette’s bloom habit? I’m assuming it’s once blooming and if so, does it have a long bloom period? Also, what is the growth habit (size)? Thanks.

‘Minette’ and ‘Banshee’ are once blooming, but bloom for a good period of time. The shrub of the former can reach 1.2 metres in a protected area of Zone 3. The ‘Banshee’ shrub appears to be shorter. Hard to tell because where ever I have found it on the Canadian Prairies, the shrubs of this cultivar have been growing in one location for likely several decades and are competing with grass or other shrubs. But I know of one shrub now planted in a cleanly cultivated area in Zone 2, so I’ll see how tall it gets.

‘Minette’ appears to have a lot of healthy pollen cells. 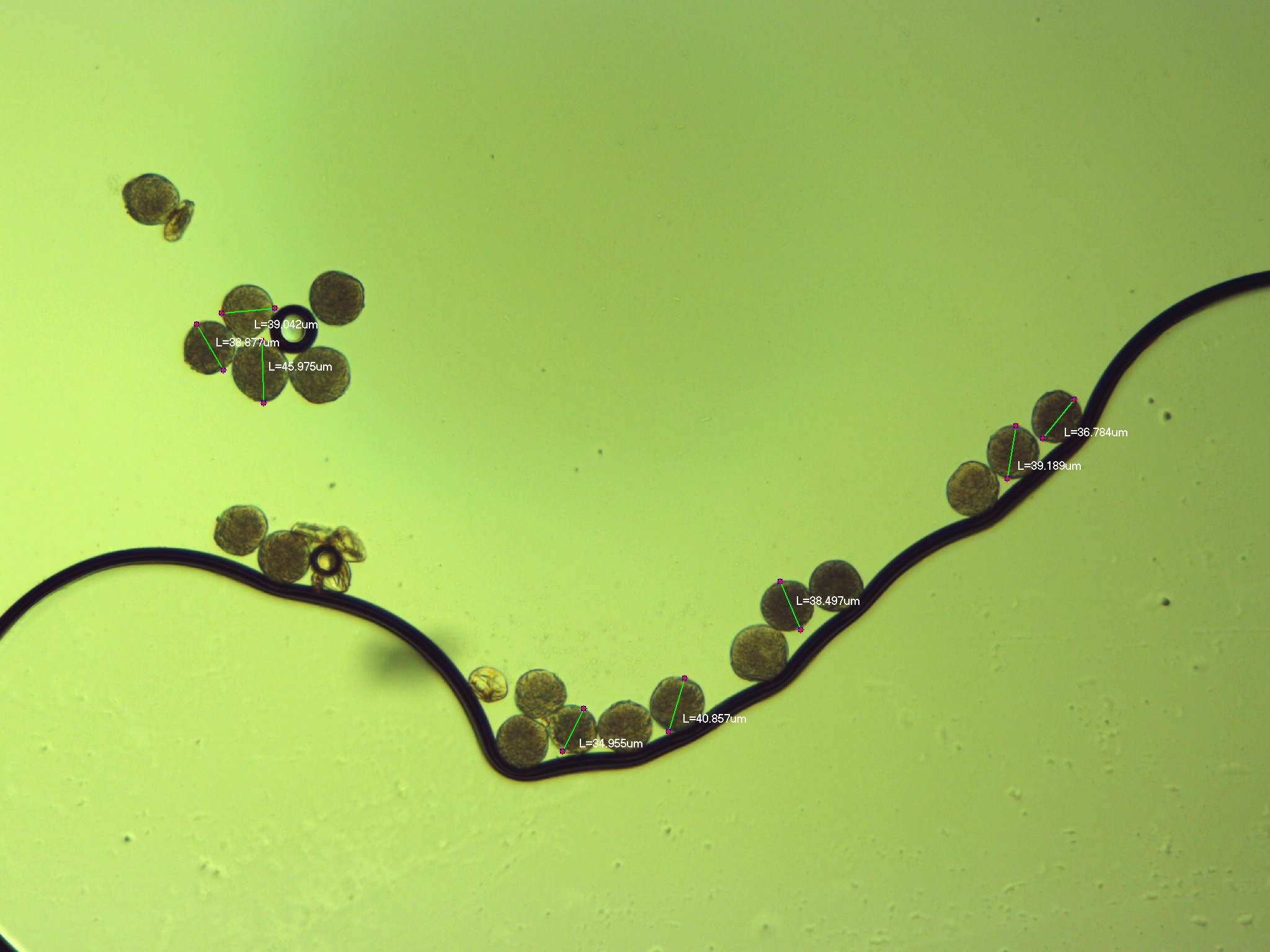 That’s great Margit! Thank you for posting that slide.

‘Minette’ is not the same rose as ‘Banshee’ in Canada. The latter, of course, is notorious for the flowers balling. 'Minette’s flowers in my experience don’t ball. Furthermore, ‘Minette’ is likely much more fertile both ways compared to ‘Banshee’. Using ‘Banshee’ as the pistillate parent, for example, I never could get it to set hips using ‘John Davis’ as the staminate parent. It appears I’ve had no problem in that respect with ‘Minette’ (pollination done a couple weeks ago).

Does the following statement in HMF need to be updated:

“The rose currently available as ‘Minette’ is identical to ‘Rosa x suionum’ in Scandinavia, to ‘Dornenlose Kreiselrose’ (thornless turbinata) in Germany and to ‘Banshee-Rose’ in USA.”

For who is looking, the only source I know of that is commercial is Cornhill Nusery for the Minette I believe Paul writes about. Of course this assumes I am not wrong. I find it interesting how I “discovered” there are “two”. Back when Pickering was operating I purchased their Minette. It was “white” with some blush and balled like mad if a bead of sweat drop from your brow on a 90 degree F day. Pickering after some hard pushing by an American agricultural student in Washington - from Minnesota or Wisconsin I believe - changed the name on their site to Banshee. After a few years I decided I needed another version of Minette that might be right so I bought one from Cornhill (figuring it was just Banshee) and forgot about it after planting. A couple of years latter I found a nice pink rose, and the tag said Minette … I naturally thought BS I mixed the tags as it did not look like Banshee. So it seems so there is a rose out there that seems a bit hardy and is pink and seems to have alba in it that maybe Minette and available. By the way my banshee blooms today are nearly all failed-balled.

Here is some pictures of Minette: http://www.ruususeura.fi/a-suomi/a-albat/minette.html

Yes, that HMF Roses statement needs to be updated, of course. It was a mistake to make a definitive one like it was and without any reference.

Paul Barden discusses ‘Banshee’ in some detail on his web page.