Hi y’all, I’ve introduced myself before, but im newer to the forum and this is the first year I am able to do any hybridization. Last year was more of a plant establishment year. I am currently practicing stratification with some open pollinated seeds and hope to get some to germination soon! I believe I have some woodsii seeds I harvested from the wild based on leaf and thorn shape, as well as cane color and growing habit. I’m hoping to get some germination from that to have for breeding next year. I really only have one question right now, but might have more in the future.

When is the best time to actually do the hybridization? I kind of thought during the first flush would be best, but im realizing not all of my roses are in sync. I do have some that look like they may bloom around the same time though. What are some of the strategies that have worked for you all?

I believe I have some woodsii seeds I harvested from the wild based on leaf and thorn shape, as well as cane color and growing habit. I’m hoping to get some germination from that to have for breeding next year.

Probably year or two after next. Woodsii take a while to start flowering (was 2nd/3rd year for me).


As for the question. Probably not really too significant unless your in an extreme environment. Climate plays a part, folk in colder climates may need to do earlier to have enough of a season for the hips to ripen, while I (in Australia) have a growing season of 10 months and the only thing to consider is not loading up a plant with too many hips early in the season if it’s a La Nina year (droughts and heat waves) as it’s just a giant stressor to the plant or if its an El Nino year (so lots of rain, this year awful floods for a lot of the east coast) as can’t really pollinate if every day is rainy for weeks on end so pollinate earlier (because it won’t be very hot and droughty during mid summer).

In a shorter growing season here, so I must use first round of blooms so they have time to ripen. There are exceptions, like rugosa hybrids: Therese Bugnet took half the time to ripen, as has Wasagaming.
You could try saving pollen from earlier bloomers to use on later bloomers. Unfortunately, doesn’t work the other way around this year, but you can save and freeze pollen for next year, that way you can make the crosses you think would be best.
Duane

In New England I pollinate from first bloom, around May 15, until about the Fourth of July. This give enough time for hips to ripen before the first frost. Generally speaking allow for about 105 days for that but it depends on the total hours of daylight and temperature other considerations being equal. Nor is 105 a magic number, it can take more or less time depending on what you crossed. 90 days might be enough, it might not.

Collect pollen, dry it and freeze it to have on hand when the blooms are ready. Freeze it this year for next year if you need to pollinate very early blooms.

Thanks for the advice, this helps a lot! I collected some pollen already and its in the freezer while I wait for the rest of my roses to catch up and start blooming.
I also feel kinda sad about some rose choices I made. I started buying things last year before I did research and started looking on here and digging through conversations. I really wanted some dark reds to work with and I ended up getting ink spots and black baccarra, neither are fragrant and are rated sub par. I am kind of wishing I had gotten something better like oaklahoma or El toro. Any recommendations for dark healthy fragrant reds that I might be able to replace these with in the future? Or should I try my hat with these? Ink spots produces lots of seeds in massive hips. Tis very fertile.

Architecture makes a lot of difference to the answer to your question. Your exemplars are classic HT’s, is that what you are targeting or do you want something more for the garden than the exhibition table?

Classic HT’s with densely pigmented red, scented blooms would be Chrysler Imperial, Papa Meilland, Mister Lincoln and, as you mentioned, Oklahoma. However these are mildew and black spot magnets depending on your environment. Kordes were working on disease resistance so might have something on offer that fits your bill, Heirloom carries them. Roses with Earthkind® validation would give a degree of confidence for health and vigor as would having Bill Radler, Ping Lim or David Zlesak as hybridizer. Suntory’s Crimson Knight, Empress and Sunrosa Red are options. Though probably impossible now to source (Burlington or Rogue Valley Roses?), Paul Barden’s Canniken and Castle Bravo are densely pigmented options but you can’t be timid of thorns. Ralph Moore’s 12-59-10 also comes to mind, would give size control and mossing as a bonus.

Henry Kuska offers up seeds from his breeding program from time to time on this forum. I have never grown roses that were more healthy, vigorous and densely pigment than some from his seeds. In particular, Hamburger Phoenix X William Baffin comes to mind as does a caveat that these will be big, big plants. For that matter, Hamburger Pheonix itself would be a good candidate for refinement. The one plant I kept for a long time from Henry’s seeds had a good dose of yellow pigment deep in the bloom as a side benefit.

In this case, I like the hybrid tea look, but I have a lot of varying goals. I would like my dark roses to have the hybrid tea form. The qualities most important to me are fragrance and disease resistance. I live in south carolina, so avoiding black spot prone plants would be best.

I’ll have to meet or get introduced to Henry kuska. It sounds like I might enjoy some of his seeds!

Welcome! I believe Dr. Kuska relocated a few years ago and severely downsized his garden. If I recall correctly he did keep a limited number of his favorite plants but I’m not sure he’s actively breeding any longer. He shared plants and seeds with a great many of our members, so there may still be some of his available. I grew a few myself at one time, but I no longer have any of them.

Dark Desire is an incredibly fragrant red rose from Kordes. Mine set a couple of hips last season (its first).
It is at least more disease resistant than others and could be profitable.
Duane

I looked at dark desire and I think it would probably work well! I appreciate the recommendation. The fragrance sounds like its very different/unique. I think I would replace black bacarra with that one. I may keep ink spots because I like the vigor and it’s pretty disease resistant as well. I may be able to play around with it to make a better rose.

Also, this may be a strange request, but would it be possible to get some pollen from a woodsii and/or a pulverulenta from someone on here if I wanted to do some test crosses?

Bregingew, you should state what county you live in when requesting pollen, seeds, etc. Exporting pollen overseas is a royal pain and impossible to some countries. If it’s within the US, that’s another story.

I’ve got it growing out by our driveway; it’s all over the place here.
I have some pollen ( I believe) in the freezer if you would need it before the time it blooms here. I’d half to look back at pictures last year, but seems early at the beginning of June, perhaps.
Duane

I would really appreciate the pollen, I want to pollinate some of my mosses with it, im unsure when they will bloom though. They just came out of dormancy recently, so I can imagine that they may be blooming in June.

I have my first germination! Its an open pollinated double knockout seedling. It was part of my practice batch to see if I can germinate things successfully. Its cute and small. I am not sure if it’s a selfing since nearly no hips form on the dkos. I’ve put some diploid pollen on the dko this year and it seems to take very well. If it is a cross, the only roses in bloom in my yard at the same time were spice (being closest in vicinity), ink spots, and state of grace. I guess we will see what happens

Congrats on the germination, a most important step!!!
Hopefully you will soon have your crosses germinating just like that.
Duane

Your OP, if self, could lead to any ploidy. If its a self, it could have interesting results.

I have a specimen of what I believe is R. woodsii, collected from the Tobermorey Peninsula in Ontario, about 25 years ago. I will have blooms on it soon.

First of all, thank you to those who sent me pollen! I believe some of my plants accepted it although the hips are few.

It’s the rainy season here in South carolina so many of my bushes have dropped most of their leaves from black spot etc. The roses that are holding up the best are the double knock out, amazone, spice, cremoisi superiour, capitaine john ingram, nuits de young, comtesse de murinaise, in your eyes, peggy martin, earth angel, eden climber, and autumn damask. Surprisingly, baron girod is holding up really well too, but less so than the others.

I wanted to post an update on my op double knock out seedling. I am pretty sure it’s a selfing. It’s growth stalled in my trays and so i transplanted it into the ground while it was still little. It’s holding up really well in the rain and has some good foliage color. It doesn’t seem super vigorous, but I’ll update as i go.

I’ve also seen comments here about earth angel not accepting pollen and not producing much pollen. I was able to get a hip from crossing paris d’yves st laurant with it (however, after being on the plant for months, the hip disappeared and I can’t find it). It seems to also be taking baron girod pollen. So I wonder if the seeds will be viable. I know I won’t have a ton of seeds to grow next year, but I feel like i have learned my plants now and know what I need to do next year.

I also got a hip from in your eyes (hip) and nuits de young (pollen) which I think is probably the strangest cross I made this year and I did it on a whim. Hopefully I get some germination from the cross. 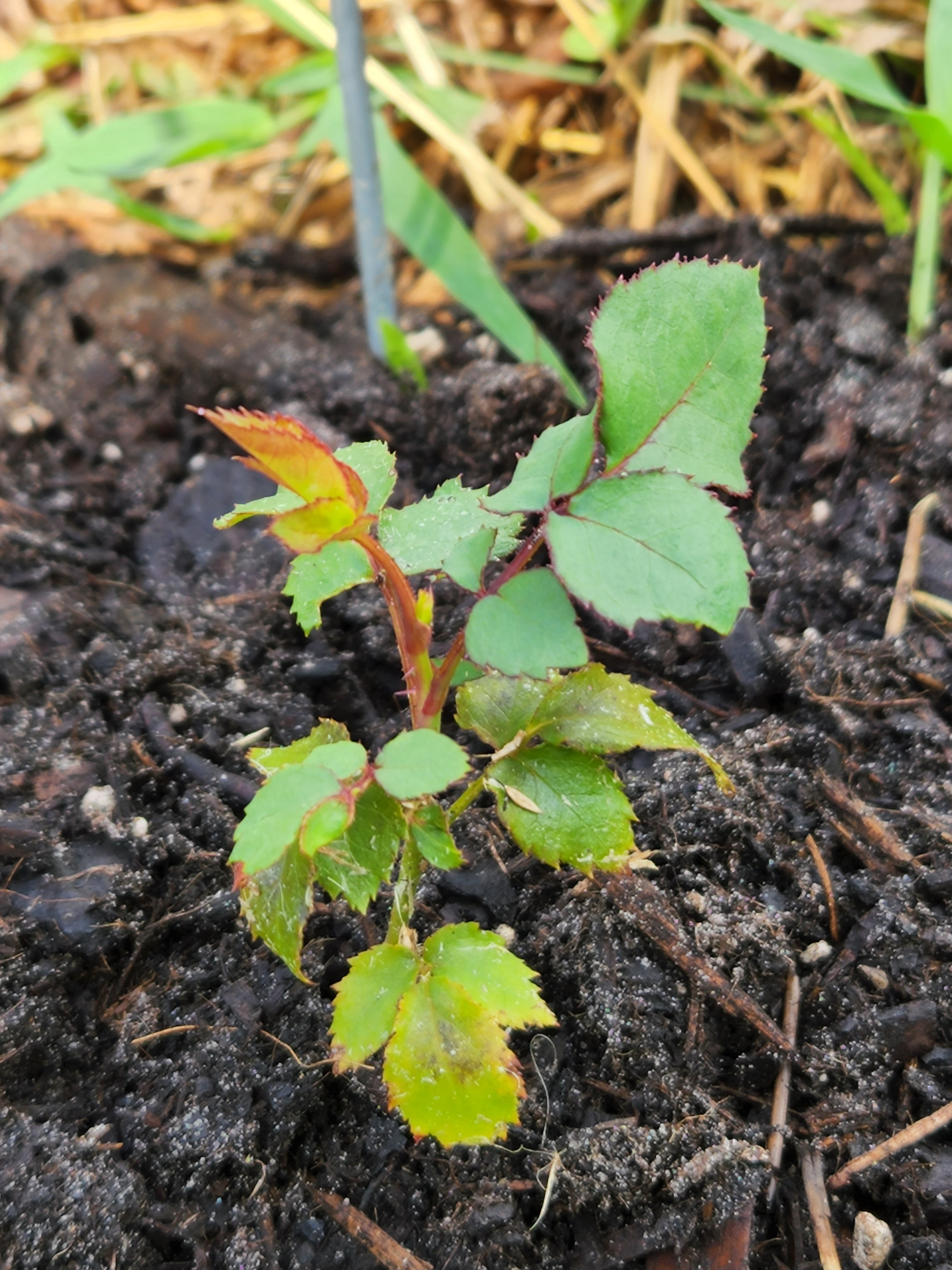