Extra plants to share of a R. wichurana seedling

Thank you Henry for the recent great post about the two QTL regions on chromosomes 3 and 5 in R. wichurana contributing resistance to black spot. I suspect from knowing many of the researchers and some of the history of their work, that the R. wichurana used at least in some if not all of the populations is R. wichurana ‘Basye’s Thornless’. There is the tetraploid rose out of R. carolina that also is described as ‘Basye’s Thornless’, but that is a different rose.

I stuck a handful of cuttings last year and have some gallon pots I’d love to share with people of a seedling that has stayed pretty healthy from a cross of Kardop-1 x R. wichurana ‘Basye’s Thornless’. It has the very vigorous prostrate habit with glossy thick leaves of ‘Basye’s Thornless’. The blooms are a little larger than BT. It is diploid (I counted it this past spring) and it sets seeds well. It is a one time bloomer, but gives some repeat blooming seedlings when crossed with repeaters. The mom is a diploid single red from a Kardinal Kolorscape open pollination and it is pretty healthy too. Kardinal Kolorscape is triploid and has Knock Out close in its background. This seedling I suspect can be a good stepping stone for elevated back spot resistance from combining likely some of QTL’s in BT and likely some of the resistance genes that are out of Knock Out. The seedling is thorny, but is a carrier for thornlessness from BT and with the right crosses one should be able to get thornless seedlings.

Please private message me with the shipping information and I’d be glad to distribute the extra plants until they are gone. 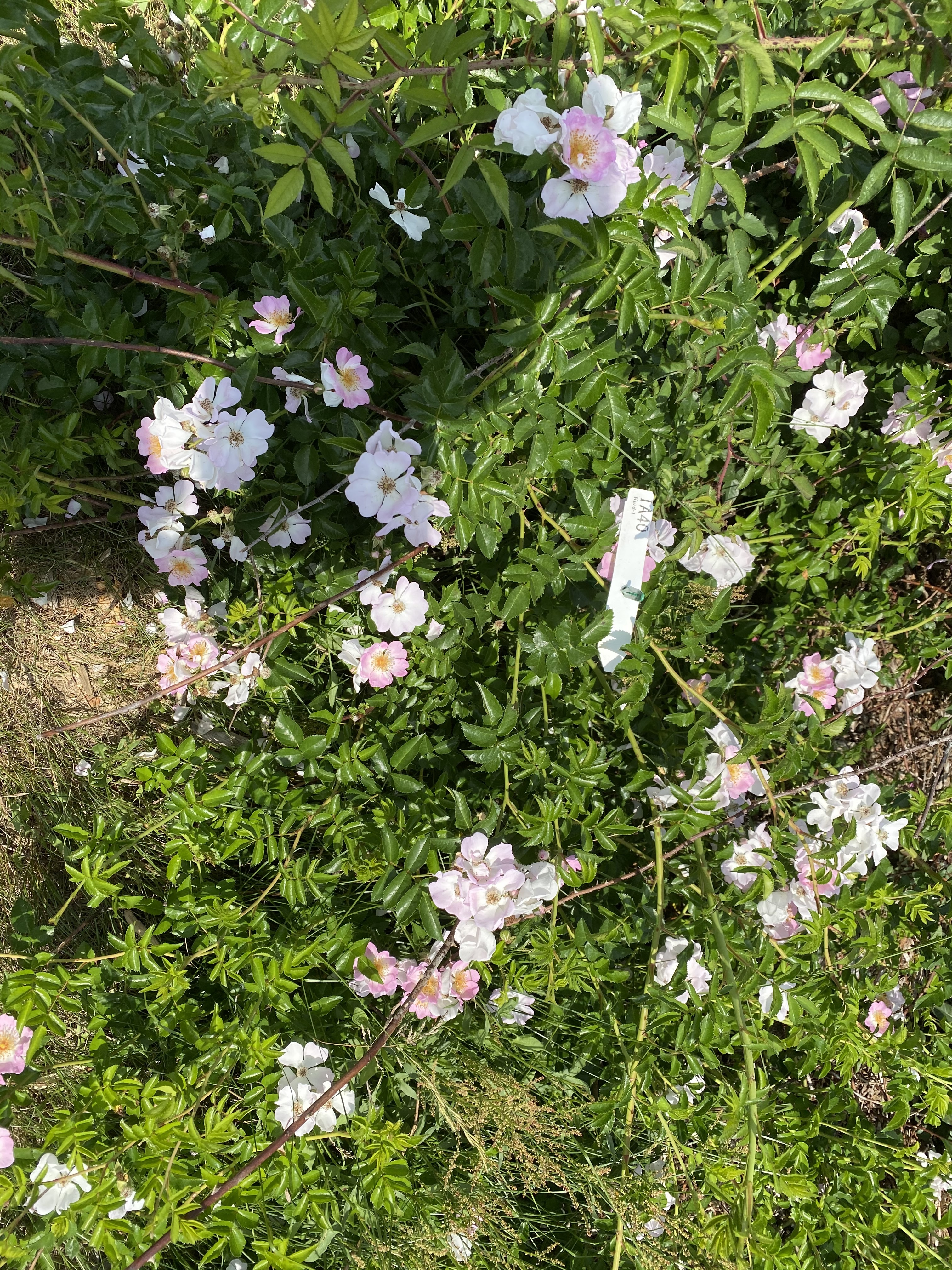 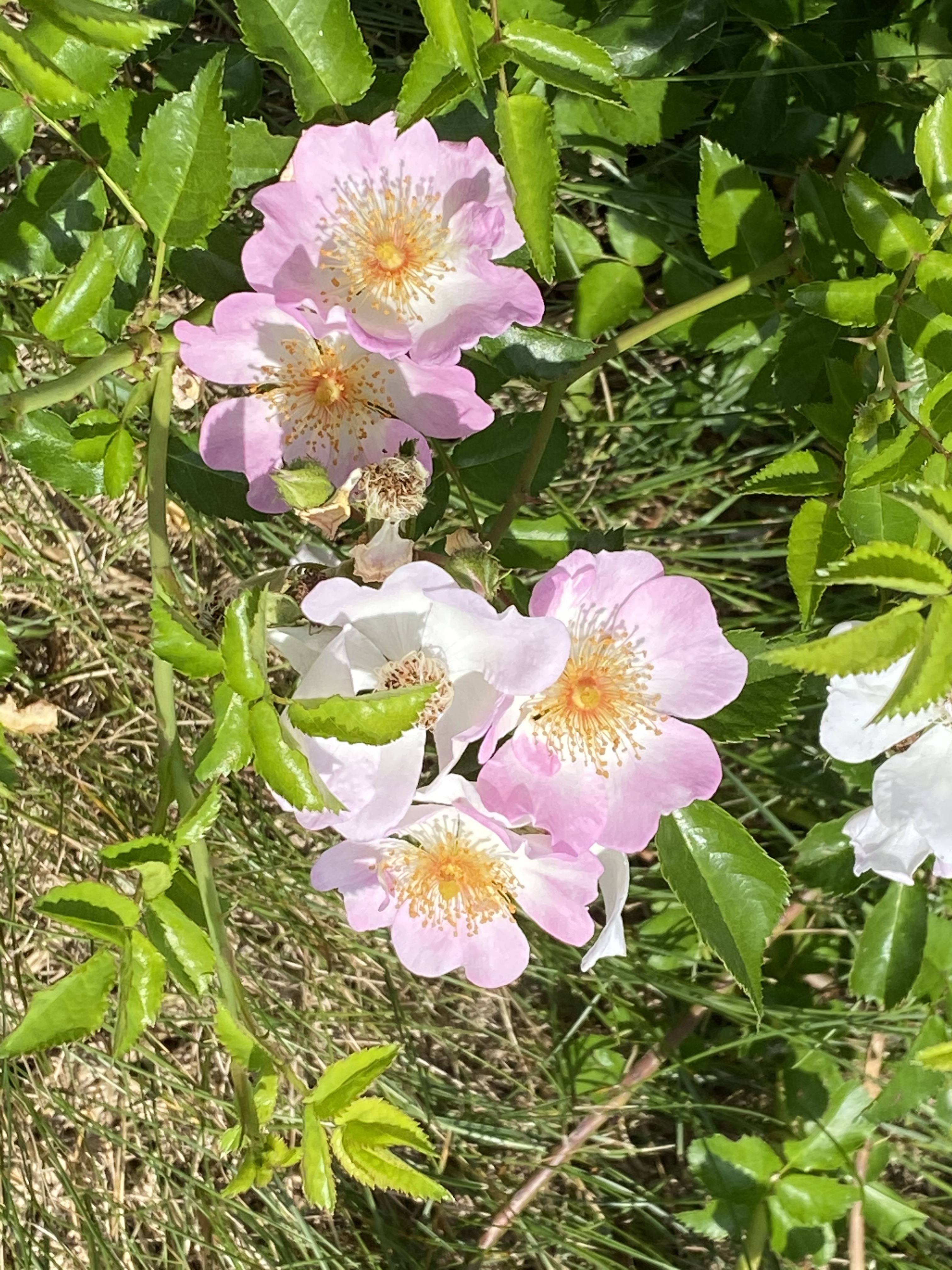 This could be fun to treat like 0-47-19, making similar crosses with it as were made with 0-47-19. If you have more than enough to satisfy the demand, I can give one a home, please? Thank you!

I am a little jealous that you’ve actually gotten something out of Kardinal Kolorscape! I had come to the conclusion that it was a sterile triploid. I’ve had three shrubs for a few years now, and have never had any hip set despite the open flowers that permit plenty of access for the bees along with my own efforts. Do yours reliably set hips?

That is a pretty cool seedling. Does the mother maintain any of Kardinal’s depth of coloring? And are you per chance working it with progeny of R. setigera serena, or Basye’s Legacy?

Kardinal Kolorscape doesn’t set too many hips here either, but the couple plants I have routinely set a few hips each year. I like to try to germinate them, but often nothing germinates. Here are a couple pictures of the original seedling of the fertile diploid single red op of Kardinal Kolorscape. I had it at a friends house where I gardened for a decade and had to recently transition the garden out and back to lawn as they were selling the house. I have a couple young plants from cuttings in in pots of it and hope to get them to build in size and someday have some to share. I suspect it could be a hybrid versus a self, but am not quite sure. It is much more cane hardy than Kardinal. It is taller and more open and a bit stinger in bloom. It isn’t a one time bloomer, but doesn’t repeat as continuously as most modern roses. I like the seedling a lot though and it is healthy. It sets a lot of seed that germinates pretty readily. That’s a great idea Philip to cross it with R. setigera serena and others. I have some R. setigera serena x R. wichuriana ‘Basye’s Thornless’ seedlings that would be fun to cross it with to bring in both of those thornless species at once. 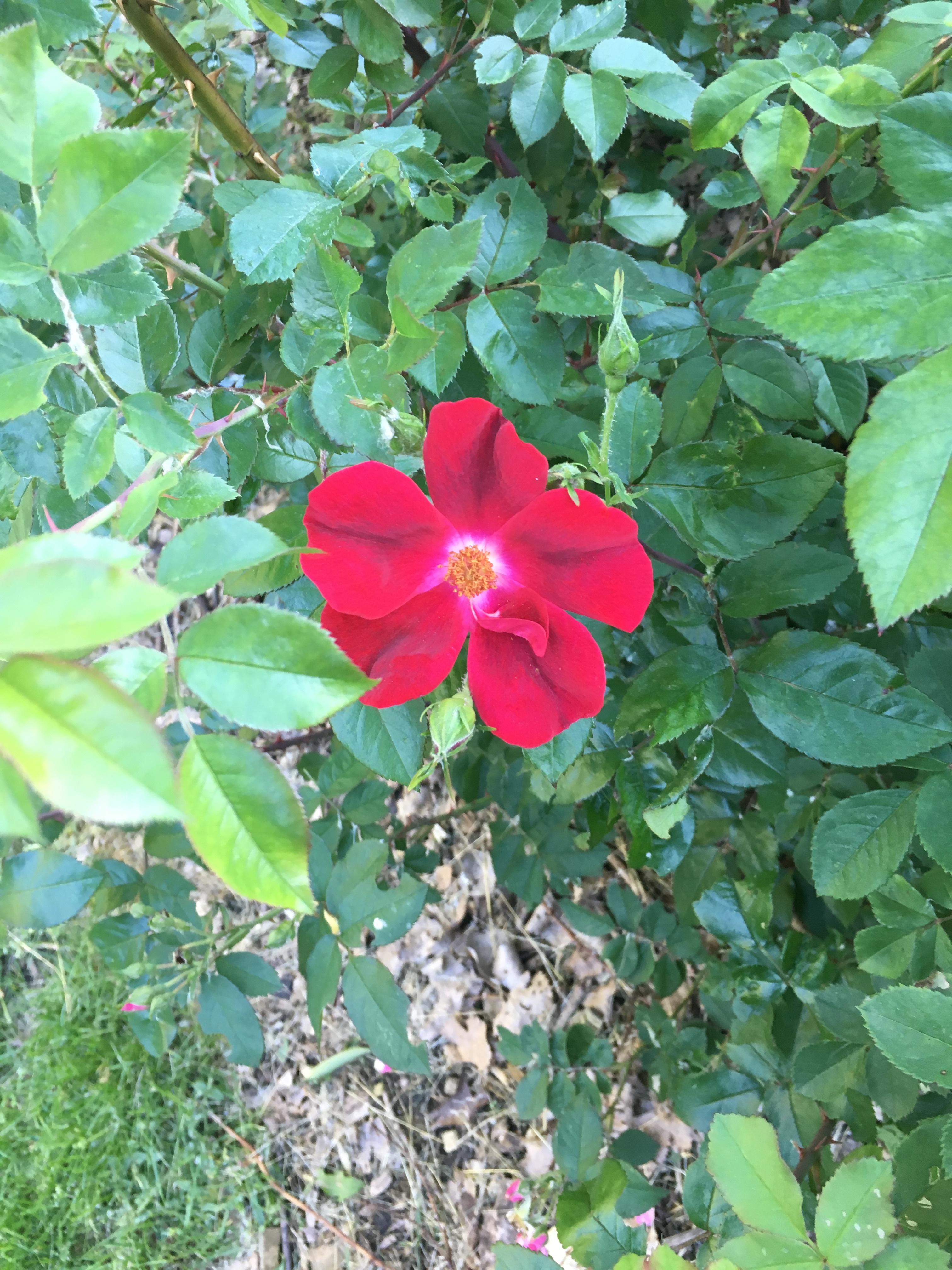 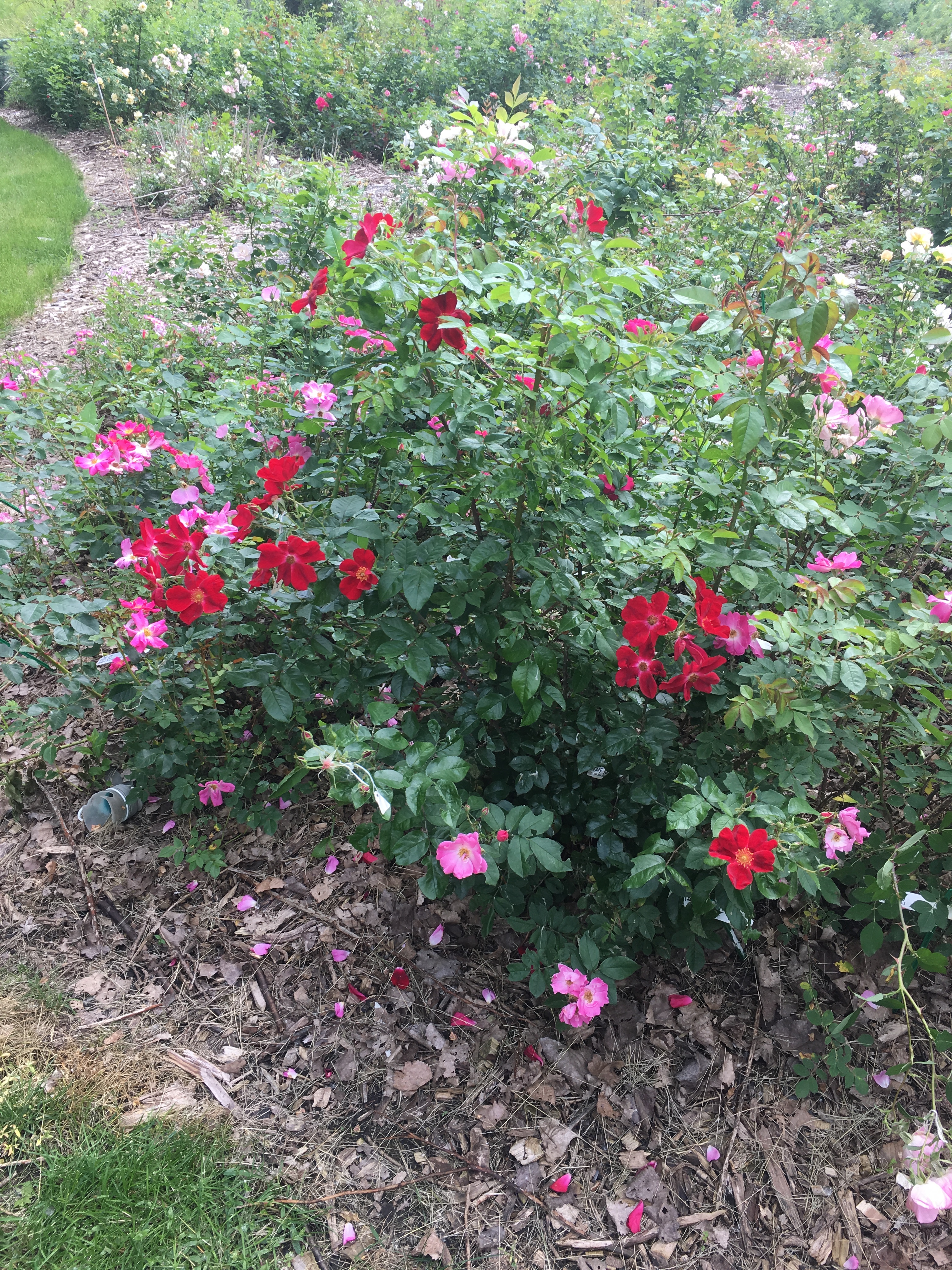 I don’t know a whole lot about your current lines, David, but was guessing that r.setigera derivatives would factor in moving forward. Using Basye’s legacy via one of Moore’s Playboy offspring (Gina’s Rose, MyStars, or PlaBasye) could likewise be interesting, I imagine. (Never grown, nor worked with any of them, however, so I’m just speculating aloud.) No idea if any of those could yield the cold-hardiness I imagine you might be seeking, but could imagine some good vibrant scarlet colors might re-emerge.
(Actually, I might be replicating some of the genetics in Miracle on the Hudson with that one, but with good potential for thornlessness.)
My imagined armchair hybridizing always yields better results than my real efforts! Forgive me my unsolicited back seat hybridizing. Theorizing is so much easier than actualizing.

Thanks for posting pictures, both of seedling and parent. This is an impressively vigorous young plant. Due to space this winter I repotted it And tied canes vertically to a few posts. I’m wondering if I need to let them back down horizontal because it likes to sprawl? Or if it will bloom fine treated like a small climber? I am really looking forward to testing this both directions. Thanks again!
Duane

Being a rambler, it SHOULD flower more heavily if the canes are less vertical and more horizontal so the sap pressure is equalized along the cane, pushing laterals along their length, which will then flower. However, if you haven’t the room, then spiral the up the vertical posts as that also slows the sap flow and pushes more laterals around them, hence greater flowering.

Great advice Kim!! I just have had this one sprawling and it is crawling over its neighbors :0)

You’re welcome, David! Thank you for sharing your roses! Consider the twisting up poles to be the rose growing version of square foot gardening!

Great idea! I would like to have it spilling down over a rock wall, but don’t have the rock wall. Nor do I have a slope to put one in. So I’ll try spiraling it. Thanks!
Duane