I did four or so crossings with Comte de Chambord as mother in the past three years. Only one set a hip, that was one I did during second bloom.
This year I did 11 crossings in first bloom on CC. It looks like all hips will be rejected. One after the other the stem is turning yellow, while the second bloom is coming up.

Anyone else has tried doing crossings with this rose? Maybe had similar issues? I’m thinking of doing many crossings in second bloom also, just to know if maybe chances are greater to have hips then.

The crossings I made, are with very diverse other roses. With link or no link with CC. They can’t be all incompatible. I think CC aborts her hips to save energy for her second flush.

I’ve some crossings with CC as pollenparent. They look fine for now

I’m curious to learn from similar experiences. Anyone?

In my climates, I’ve never seen this rose set a hip. If the variety refuses to self set, I figure it isn’t a willing mother so I most often don’t spend my time attempting to encourage them to.

I have also tried it as a seed parent, and unfortunately didn’t succeed. Pollen seems like the better way to go (and has proven successful for other breeders). If you could use David Austin’s Gertrude Jekyll instead to reach your goals, that seems to be a very good seed parent.

Thanks for the advice. I’ve the impression that my pollinations with Comte de Chambord are viable. The hips are swelling nicely. Maybe I’ll do some crossings in second flush just as a test. Not sure yet.

That’s very good news! I hope that it does work for you–the flexibility of being able to use a rose both as a seed and pollen parent can be incredibly important when the other chosen parents are relatively inflexible. I’m assuming that everyone is working with the same ‘Comte de Chambord’ (that is, probably, really ‘Mme Boll’). I have used ‘Baronne Prevost’ as a seed parent in the past, and that is the parent of the true ‘Comte de Chambord’.

I’ve also got Baronne Prevost in my garden. I’ve not yet come to do any crossings with it. She isn’t doing all that well yet. Maybe another year or so until it starts sending up big shoots. I like the prickles on this one. How does she do as a seed parent? How is the offspring?

‘Baronne Prevost’ seemed to work pretty well as a seed parent–this was a long time ago, in a place that was a bit more friendly to its culture. I suspect that it would prove a little too disease prone here for long term success, although it might be one to try again just for use in breeding, just as I had hoped to use ‘Comte de Chambord’/‘Mme Boll’. The seeds matured in a relatively short growing season in more shade than roses should have to tolerate, germinated reasonably well, and I remember one particularly vigorous, surprisingly healthy seedling with lush, beautiful leaves from a cross with a miniature. It did act like a once-bloomer, though, before it suddenly died of root rot. No fault of the rose’s, as I recall.

Hi @KarelBvn
Did your Comte’s hips stay on?
My CdC/Mme Boll set no OP hips during the first flush but did set two during its late August/early September rebloom. I am hoping they will stay on.
I read somewhere on this forum that hot temperatures reduce self-incompatibility, so perhaps that’s why the OP hips were able to set in the summer heat and not earlier.
I am curious about how things went with the hips on yours.

None of my crossings in second flush stayed on. I had one good swollen hip, but eventually it turned yellow and fell. The others didn’t even start to swell.

CdC is an excellent father, but a terrible mother.

I can confirm and understand the difficulties with ‘Comte de Chambord’ as mother rose, because I have worked with her continually for several years. This rose does not form rose hips very freely and most aborded. So no crossings had worked for me as well, even with very varying pollen parents.Occasionally, very few OP hips were formed and matured more or less intensely, but germination failed. By using embryo culture application, all embryos were detected as rotten and infected so that no seedling was able to see the light of the day so far. I will stay on the case and keep you updated.

Thank you for confirming.
Wouldn’t it be nice to have a list based upon experiences of members with roses and their abilities as a pollen or seed parent?

Many thanks for the proposal. Generally a list based upon experiences of members could be a helpful idea but in order to get significance, the data would have to be retrospectively and ongoing collected and continuously updated. Furthermore the very different climatic conditions, short-term weather events, plant health as well as ground conditions could falsify the results. For this reason the list could be only a very coarse reference point in best case. Maybe creating the list could be too much effort against this background.

A one time petition maybe?

What sterile (Commercially available) roses have you encountered? Pollen not viable, doesn’t set hips, both?
What are the best available roses you have worked with? Top ten.

and the discussion afterwards.

My only remaining OP hip on CdC is still on at around 60 days and starting to blush a little. Hang in there! 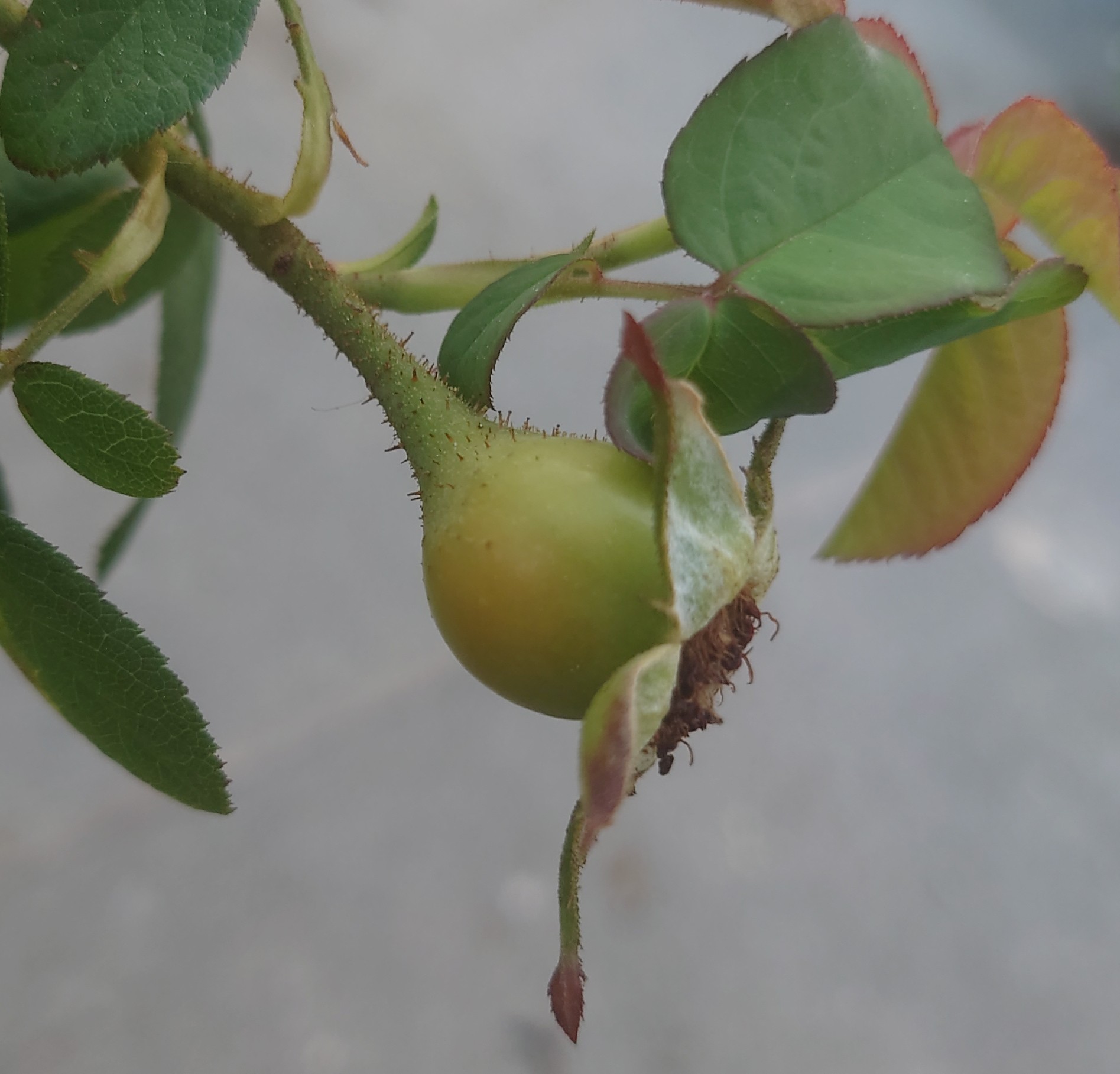 As for sterility, I 'd love a list like that but as a newbie I really can’t contribute much, sorry @KarelBvn !
I have two roses that never set OP hips here and that none of my pollination attempts worked on: Heidi Klum and Wild Edric.

Wild Edric doesn’t set hips I’ve read. Used to be on my wishlist.

What I nice message ! I’ll keep my fingers crossed that the hip is not empty. Pls keep us up to date.

I’ve noticed that the seed(s) is on the side where the coloring starts. I can see a slight orangy hue already on the hip in the picture. I think this could be a good one. Then again I 've had one hip this year on CtC that was beautifully swollen -which is also good sign - but eventually it fell. It hadn’t any orange though.

Unfortunately, from my own experience, at some Portland roses the orange hue of the hips, as well as the look alike swollen condition is not necesarily a clearly sign of a successful fertilization. Every year I have similar looking Portland hips, as shown here. They were promising but a couple of them were nevertheless blank. Since a same cross had already worked in one or other year (in this case not with CdC), I guess that the local conditions, temperature and radiation has a considerable impact on this fact too. However, there are certainly many influences that play a role in this game and play into each other.

For those of you who can grow CdC (Mme Boll, really) and Gertrude Jekyll without too much blackspot, maybe it would be worth backcrossing GJ (as seed parent) to CdC/MB to see if you can get a plant with more of the habit of CdC/MB in combination with the good seed production and germination percentage of GJ.

@Roseus , I hope the hip won’t be empty! IF there’s something in there it’s getting close to the point where it might be viable even if this hip falls off. 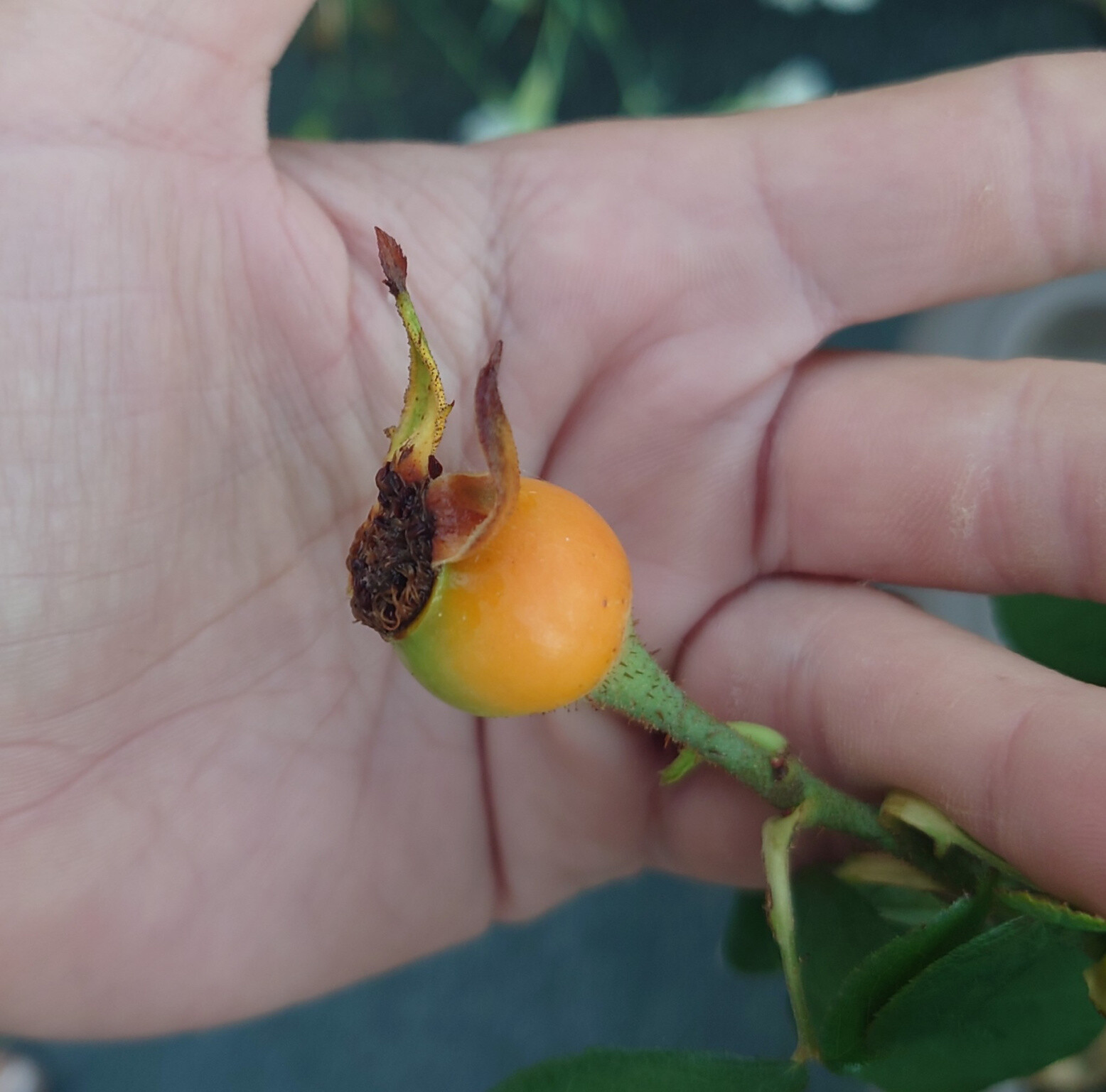 It’s been around 80 days now, although I don’t know exactly. More and more orange and sepals starting to fall off. We’ve been getting a ton of rain and daytime temps are still around 18-20°C, with occasional warmer days.
I went back and looked through my pics to see what was blooming at the same time as CdC: It’s either self pollinated or Darlow’s Enigma or Eyes for You or Blanc Double de Coubert. Either one could be fun!

@MidAtlas I won’t be the one to do it though, as I don’t grow GJ, but it would be an interesting experiment to do that back-cross!