I don’t know of any roses in my garden that don’t get any cercospora. Many rugosas seem relatively clean of it. I was in a non-sprayed garden today and Screaming Neon Red seems to have a lot less of it than a lot of other roses. I have some op seedlings of Rainbow Knock Out that seem to be relatively clean of it. RKO gets a good amount of cercospora for me (other Knock Outs are much much cleaner). I’m not sure what the male parents were, but the seedlings are one time bloomers. I suspect the dad(s) are some roses with Explorer climber blood in them (‘John Cabot’, etc.). Explorers (the non 100% rugosa ones) generally get a good amount of cercospora in my garden. I wonder if there are different resistant genes from each of the different parents that when by themselves were overcome by the races in my garden, but with both resistance genes together in a single rose, there isn’t a race that can easily overcome both together in these seedlings? It is just a guess.

I have a number of seedlings out of Morning Magic that show a very high resistance to BS and cerospora. Some of them don’t bloom the first season and I’m wondering if that is due to the R. rugosa ‘alba’ blood in Morning Magic. R. glauca, and R. woodsii ‘Kimberly’ are not immune. I have some R. nitida hybrids that show good resistance. Metis and Orantida to be specific. ‘Skinner’s Red Leaf Perpetual’ (R. glauca hybrid) has very good resistance.

I’m sure there are a couple that I can’t remember.

Julie Overom says cercospora is her number one problem. Almost all roses get it eventually. David’s first sentence is stunning, “I don’t know of any roses in my garden that don’t get any cercospora.”

So although I have many roses that seem clean, I know my cercospora pressure isn’t as high. I do know I have it. Last year I planted several John Davis in my trial area to act both as indicators and incubators for cercospora. So far this year they are still totally clean, so I know that I can’t get too excited about any of my other roses that are still clean.

It sounds like the best we can do is to develop and find roses that tolerate the disease without losing many leaves or becoming significantly discolored. I know my R. nitida specimen seems to get cercospora all over but it never has leaves turn yellow or drop off and still looks good overall.

I’m not sure if I’ve seen cercospora on pure R. carolina and R. virginiana. Julie has told me that while her R. virginiana itself is healthy, its seedlings seem susceptible.

FIVI3 is very healthy here. Getting healthy F1 is proving to be a challenge but I will continue using it.

My rosa carolina seems to get it, but just a little

Cercospora is funny. Some years almost everything gets it, esp. late in the yr. So far this yr, haven’t seen a trace on anything. It has been very hot and since I am watering extra, I am taking care to fertilize extra. I have noticed that cercospora is very exploitative of low or unbalanced nutrients.

Does anyone know of botanical roses that don’t get it, or only get it a little bit?

Does anyone know of botanical roses that don’t get it, or only get it a little bit?

In terms of this site, I think a question to ask would be which roses tend to improve this issue in the next generations. I can think of a few examples.

A common example seems to have been ‘Southampton’, and to a lesser extent ‘Alexander’. There are many more examples, but this is an easier one to see for many people in many gardens over many years. ‘Silver Jubilee’ has a lot of these lesser spot diseases (cercospora, anthracnose, downy), but it has had a lot of benefits for its time, too. Such as large blooms on a semi-dwarf HT, color, and repeat bloom for its class type. In the next generation, we have ‘Savoy Hotel’ (Silver Jubilee//Southampton/Typhoon). The majority of these lesser spot diseases are cleared up. We also have ‘Remember Me’ (Alexander/Silver Jubilee), and most but not all have been cleared up. When ‘Remember Me’ is crossed onto Southampton, we have ‘Livin Easy’, which has done a good job alleviating most lesser spot diseases, as well. Both Alexander and Southampton have the ancestor seedling (Ann Elizabeth/Allgold). The parentage of Ann Elizabeth is unknown. However, the same breeder of Ann Elizabeth also bred Vera Dalton, which was often used by Griffith Buck. He also used at least 2 relatives of Vera Dalton a lot as well, both closely related via Paul’s Scarlet Climber. Square Dancer incorporates 2 of these relations, despite being bred from some truly awful red HT roses of the time. I grow Square Dancer here and it is quite clean. It’s a fairly ugly rose (wide sprays, bland rose pink color, no flower form), but it’s very clean. Even its stems are clean in our awful temperate rainforest winters. In contrast, Knock Out’s stems are always infected each winter. I have used another rose bred from Southampton in breeding called ‘Remembrance’ (Trumpeter/Southampton)', that also alleviates many of these lesser spot diseases in its progeny. Trumpeter itself carries several of these lesser spot diseases, so this is a vast improvement.

My suggestion is to look at these lineages and look for a pattern of improving health against these lesser spot diseases. Often they are cleaned up partially and/or in multiples of such diseases. Don’t look for just blackspot resistances. Look at why these huge breeders used certain lineages, especially when they seem nonsensical. These legacy breeders are not stupid. They knew and know what they are doing. Ask yourself why they used the lineages they did and what the benefit was. I just gave one example of one lineage type. There are many more out there. In many cases, cleaning up one cleans up another, and conversely, some parents tend to invite many when used.

(also consider supporting the volunteer-supported HelpMeFind so you can see lineages quite easily!)

I took an example photo from out in the germination beds. Ignore the brown creases. That’s from me opening the petals to see if it produces male parts when its 97F outside lol. 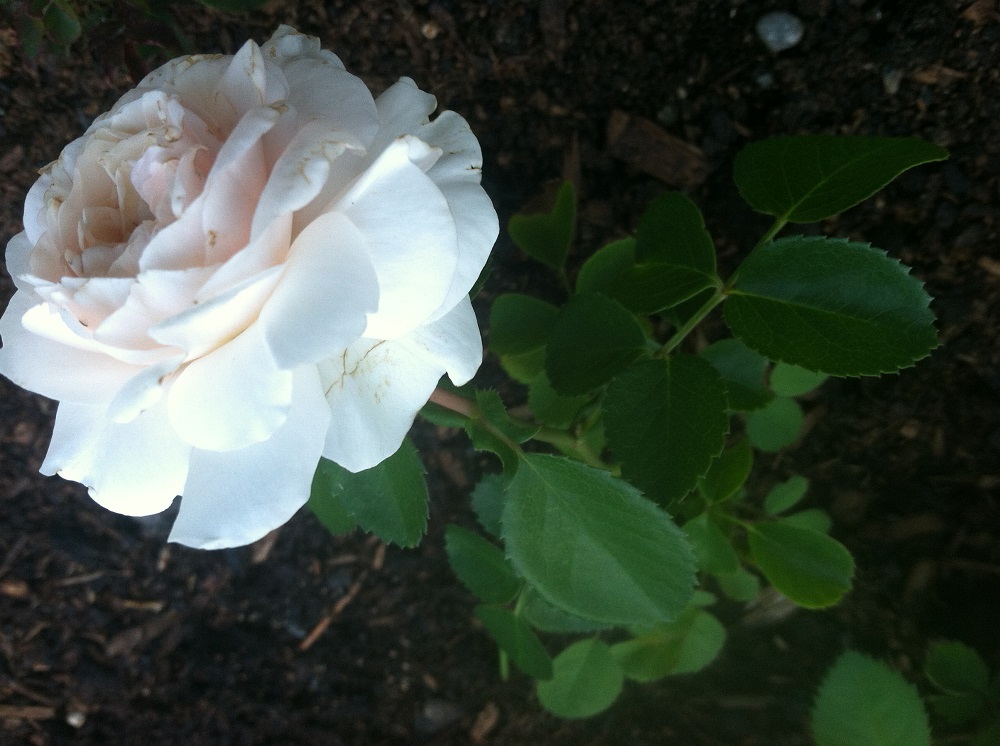 I have Many Happy Returns, it spots here not super bad but nothing special either. It can produce healthier seedlings than itself, some seem near completely spot free here but often some other issue for my conditions (ie seedling failure in extreme heat). It’s probably worth someone in a more temperate location doing a bunch of selfing’s (or just collect the OP since everything will OP) and do a round of selection…just a note a lot of selfings will have a really odd growth pattern, all horizontal growth, next to no vertical…kind of creates this empty space right above the main trunk and then a circular perimeter of foliage.


I haven’t really see anything obviously cercospora here except maybe in some of the palustris seedlings (from sheffields) but there appears to be 3 kind of distinct phenotypes/variations from those seed.

I took a photo the day before to give a counterexample. This photo is Princess of Wales x Icecap. It looks like a relatively clean seedling in the photo, but if you look closely you’ll see that the stems were cut flush off prior to the current growth. This was done in late May when all 3 lesser spot diseases plagued it. This is too bad because it has clean white blooms with broad petals that are not bothered by weather. It is wide and short, as well. However, I intended to cull it, but May is a busy time so I just lopped it off on my way to other duties. This was typical for all of the Princess of Wales x Icecap seedlings, but not for this years crop of Square Dancer x Princess of Wales.

I know I am repeating myself, but I just want to be helpful to those that are new or intermediate: Follow the lineages for increased resistances to lesser spot diseases. Maybe more people can find further lineages that resist these creeping cruds in your journeys in plant breeding. 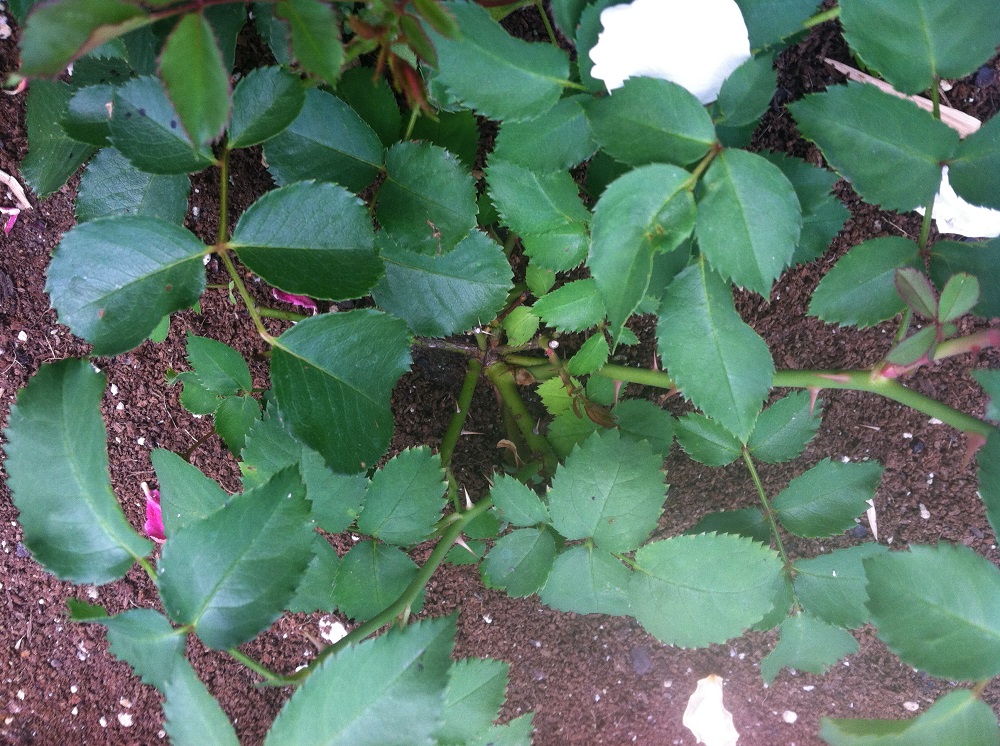