What mother plant is best at passing on mauve coloring, and healthy offspring? I’m new to hybridization and I’d really like to work on a cross that would result in mauve/lavender roses with gallica traits and climbing traits.

“Health” is going to depend upon where you live. What is black spot resistant for me on the west coast, will likely be horrible in Florida and vice versa. You might take a look at Summer Wine. It is behind quite a few very healthy, heavily scented and even wildly “blue” roses. Some of its offspring include Rhapsody in Blue, Wild Rover, Blue for You, Eyes for You, Raspberry Kiss, Bull’s Eye, Odyssey, Julia Child, Purple Splash, Stormy Weather and a host of others. Or, you can hold out for Blue for You once it’s finally released here.

Hi Kim, just to ask a quick question about Summer Wine, any thoughts of “why” it throws so many ‘mauve’ off spring ?

I don’t know, David. I’ve never grown it but find it behind so many roses I really like the looks and performance of.

Depending on what shade you are looking for, I have had good luck obtaining mauves from the following varieties that I have tried so far: Blueberry Hill, Route 66, Stephen’s big Purple, Blue Girl, Lady X, Ebb tide, Night Owl, Blue Moon, and Crystalline. Healthy seedlings are another question for the most part, but they do produce anywhere from the Dark Purples through the silvery lilacs. If you can get them, The 777 Rose and Twice in a Blue Moon will also work but they are hard to come by. I have an especially nice OP seedling from TIABM that has great scent, great form, silvery lilac and above average disease resistance. Most of these will also produce low thorn or thornless seedlings when paired right.

Best for health actually is Kordes Novalis. In fact above most HTs and it is an achievement as most “mauve” are below average desease resistance.

The best (most and good looking) batch of mauves I have ever got was from a cut flower called Old Dutch. I only kept one of its’ offspring–most of those mauves fell victim to a never ending round of Downy Mildew that yr. in perfect conditions for it. Constant moist mornings, temps below 68F, for about 6 weeks. I have never found it again as a cut flower or otherwise, but I would try it again in a heartbeat. Summer Wine has never produced a mauve for me, but it sure does produce big, healthy offspring. It is not to late to cross it with something like Rt 66 this yr, which has produced the healthiest purples for me to date, along with a few mauve to russet, fragrant seedlings.

Paul Barden worked with gallicas quite a bit and he loved mauve colors. If you make a forum search for something like Barden gallica, you will find some interesting reading.

Surprisingly, Orangeade has given some mauve offspring.

Stoddard (1980) crossed Orangeade x Angel Face.
“Angel Face duplicated, even exceeded, itself in one seedling except that the fragrance was absent. Another Angel Face seedling was soft gray with an orange edging, unique in my experience, and lovely but with more than enough faults to outweigh its only merit.”
http://bulbnrose.x10.mx/Roses/breeding/orangeade.html

Then there are (were?) Atlantis (Orangeade x Lilac Charm), Blauwe Donau and Flighty (both Orangeade x Sterling Silver).

Thanks for all the helpful replies everyone! There is a Kordes Novalis near me that I thought about purchasing, and I know it’s known for it’s good health, but has anyone bred with it yet? I’ve read that a disease resistant plant doesn’t guarantee similar offspring. I also thought it was interesting that Angel Face and Westerland who have the same parent Circus, both produce many seedlings, but that AF babies are all trash, and westerland’s offspring are all vigorous. Maybe a good lavender parent plant could be bred from circus.

Also, Karl that Angel Face seedling with soft gray and orange edging sounds lovely, now I’m going to have to look up the parentage of Orangeade c:

Also, Karl that Angel Face seedling with soft gray and orange edging sounds lovely, now I’m going to have to look up the parentage of Orangeade c:

Mauve is not a unit character. It involves the red pigment cyanidin complexed with a co-pigment.

Pelargonidin (orange) is recessive to red (or masked by the cyanidin). Therefore, an orange or red-orange rose that carries the co-pigment can contribute to mauve or purple tones when crossed with a red variety.

The more difficult part is finding a mauve with HEALTH which will produce the coloring you want in seedlings. Angel Face can easily do the color, but it most frequently makes seedlings with terrible foliage issues, lack of vigor and soft, pithy, easily sun burned wood.

The more difficult part is finding a mauve with HEALTH which will produce the coloring you want in seedlings. Angel Face can easily do the color, but it most frequently makes seedlings with terrible foliage issues, lack of vigor and soft, pithy, easily sun burned wood.

‘Angel Face’ was the first mauve I ever saw, so I do have a lingering fondness for it. Likewise for its parent, ‘Sterling Silver’, a lovely bloom despite its addiction to blackspot.

‘Lavender Pinocchio’, a grandparent of ‘Angel Face’, seems healthy enough (I’ve only known it from the SJ Heritage garden) despite its descent from ‘Grey Pearl’. Alas, the “lavender” is not stable, and is often blended with yellow and tan. I like it, but tastes vary.

As for Stoddard’s mauve and orange seedling from Orangeade x Angel Face, I once had a hibiscus of similar coloration named ‘Fifth Dimension’. Again, whether this is appealing or appalling is a matter of taste.
http://www.fancyhibiscus.com/5thdim.html

As Pierre indicated, Poseidon/Novalis earns Kordes’ highest rating for BS resistance. Unfortunately, for being such a sumptuous-looking flower, it lacks fragrance.
http://www.kordes-rosen.com/containerrose-novalis
It seems fragrance and health are a tough pairing to get in some colors.
I note that nobody has suggested any ramblers or musk roses as having potential. Is there a reason? Or is it just the too-many-generations-to-get-there issue?

Probably too many generations to get there, Philip. I do like the hibs, too, Karl. One of my favorites was Gator Pride. Hidden Valley Hibiscus I’ve not grown it, but I love the look, and name of Pond Scum, too. http://davesgarden.com/guides/pf/go/46550/#b

I was quite disheartened to see my Blue Bayou obliterated with rust when I made the move. It appears the new growth is clean…so far, but we’ll see.

Love Pond Scum as a one-liner, but I don’t think I would make space for it in my garden! LOL.

I note that nobody has suggested any ramblers or musk roses as having potential. Is there a reason? Or is it just the too-many-generations-to-get-there issue?

The Multiflora ramblers and Dwarf Polyanthas seem to be unstable in their coloring, often being more pink than mauve. ‘Veilchenblau’ and ‘Donau!’ are generally “blue”, but ‘Violette’ seems more inclined towards pink, some years. ‘Heinrich Karsch’, ‘Baby Faurax’, ‘Raymond Privat’, and ‘Sweet Chariot’ also tend towards pink, sometimes.

The colors of the DPs also tend to be dull. Many years ago I crossed Sweet Chariot x Comtesse du Cayla. One seedling was a vivid red, but I didn’t go further with the project. The color of SW with the form and sheen of CdC would be nice.

Today I saw again a picture of this beautiful rose:Lavender Chrystal. Unfortunately I can’t order it here in Europe.
Is anyone already breeding with it?

Bytheway, Novalis has a little bit of scent, especially when blooms are in the vase in the warmth of a room.
A few days ago first bloom of a Novalis-Seedling from this year has opened it’s first bloom, not really mauve. Mother plant: Minerva, Pollen: Novalis.
But there are others to come…

Florence Delattre and Azubis/Indigoletta gave me some mauve seedlings in recent years although the other parent was not mauve oder lilac. They could produce mauve or lilac seedlings when crossed with other lilac roses. 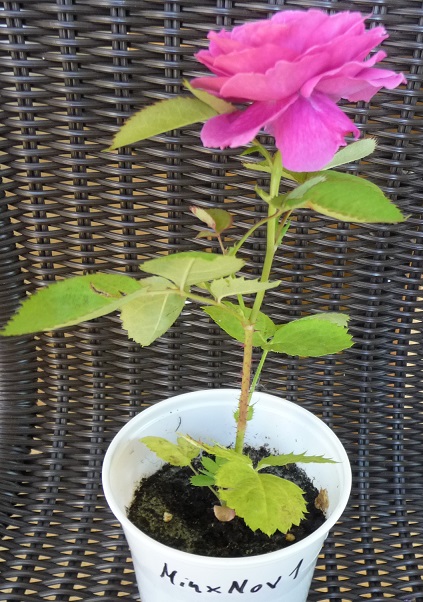