I am infatuated with yellow roses. Any thoughts on using either of these? Any thoughts on where to purchase either one also. Looked into the sources on HelpMeFind and coming up empty.

I found Roberta Bondar to be underwhelming here–it was growthy, blackspot prone, and flowered very little (maybe needing to be a larger, more well-branched plant before flowering more heavily), and the flowers weren’t especially colorful or fragrant when they were produced. It died after a few years, and I did not mourn its absence. For a supposedly cold-hardy variety, it didn’t seem especially tough in my gentle Mid-Atlantic zone 7 climate, either. Its parent Buff Beauty has been a much stronger, healthier, more durable rose here overall, although it isn’t exactly yellow, has shown relatively sparse rebloom, and probably isn’t very fertile.

Gaye Hammond has intrigued me on a number of occasions, too, but it sadly seems to have become unavailable soon after it was put on the market. Its pollen parent, Yellow Submarine, seems to be a good performer so far, and I am hopeful that it will also be useful as a parent for me. Of course, the breeder of Gaye Hammond is probably in a slightly better position to address questions about it!

I’ll try to propagate up some ‘Gaye Hammond’ next summer to share. It is very vigorous (seems more vigorous than either parent). It sets op hips, but seems a bit challenging as a female to accept pollen from other roses at times. It’s pollen is a bit stingy too, but I have been able to get seedlings of it as a male and have some I like. The op seed is fun to raise and some seedlings seem to be hybrids vs. selfs.

After Mark sold his business name and the new people that lived a ways away started selling roses under the Chamblee name they downsized their inventory. I really like ‘Gaye Hammond’. 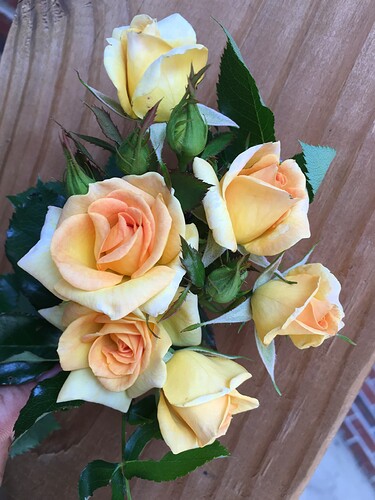 Thanks David, that is generous of you. It is definitely a beautiful rose. I look forward to growing it and using it further.

Mike, I have an Amber Cloud and Plaisanterie ready with your name on them.
Let me know if you still want them. I also have a small John Starnes Legacy which should be ready this spring. This is Pam from Angel Gardens

David, I would love to have a Gaye Hammond rose as well! Thanks, Pam from Angel Gardens.