Well, this week should separate the 'men from the boys'

As you may know, I’m breeding for roses that can take the heat and in our micro climate, we generally run several degrees hotter than the forecast in the summer, and the seedlings are up in the desert nursery which I’ve clocked at 140 degrees on the really hot days. Humidity is about 12% during the day. Should get some serious culling going on this week.[attachment=0]6-17-2015 4-59-18 AM.png[/attachment]

I do NOT envy you, Judith! Almost been there, almost done that and I’m done with it. Severe culling is occurring here, too. Rust and mildew are the criteria so far and many have bitten the dust. We are in a “heat event” right now. It’s to be 75 - 78 F and partly cloudy the next ten days.

Sorry to here about your heat Judith, hope the heat does not cull some of the one’s you really want.

Sorry to here about your heat Judith, hope the heat does not cull some of the one’s you really want.

Well, what looked good after the month of 95+ has been already brought back into the yard which is a bit cooler. As ‘infants’ they go to the blast furnace (desert nursery). Then I pick out the ones with foliage that still looks good after several weeks, and if the bloom and health is good, they come back in to the protected yard for a chance at life. Poor babies. I feel for the ones that succumb. In another climate, they could be winners.

Not only was it 109 today, but there was a hot, dry wind. Just awful for roses, not just my seedlings. I do expect to lose a few mature roses this week.

Note to self: Stop complaining about Texas summers.

Note to self: Stop complaining about Texas summers.

Speaking of hot and dry, I remember hiking in the mountains of S. California and coming across a native shrub called Fremontia. It has bright yellow blooms that look almost like a species rose like Golden Chersonese. I looked up in “Philips and Rix Roses” species that take hot, dry and cold weather also. They are: R. Serafinii, R. Stellata, R. Persica, R. Nanothamnus, R. Orientalis, R. Beggriana, R. Hemisphaerica, R. Foetida Bicolor, R. Golden chersonese, R. Ecae, Canary Bird, and R. Willmottiae. They might bring more heat resistance into our modern roses. You have probably already tried some of them. It was fun to look them up.

There are so many aspects to ‘can take hot weather.’ Does the bush continue to grow and produce new leaves to protect the stems? Do the leaves fry or spot? Do the leaves become small, curl or become chlorotic? If the roots get too hot does it affect the water up-take? Do the stems burn? Does the plant hold onto it’s dried leaves also protecting the stems? Does it continue to bloom? If so, are the blooms disfigured or tiny? What about bloom color? Does it wash out? Does the rose just crapout and die, lol?

Thanks for the list. No, I haven’t tried those, but have tried several species roses. Right now I’m growing r. Longicuspis and r. Tunquinensis up in the desert nursery where it gets to 140 degrees. Yesterday it was 113 in my yard, so it was definitely brutal up there. We’ll see how they tolerated the heat. Two that have been standing up very well and are repeat bloomers are 2 seedlings of r. Wichurana Crepin/Floradora/r. clinophylla crosses. One is a yellow clustered double and the other a small pink single. (my “blanket” series). Yellow Blanket (picture) and Baby Blanket.
[attachment=0]92-06-03 Seedling 2.jpg[/attachment]

Interestingly, so far, of my new seedlings one is standing out for beautiful foliage in this heat, and that’s an OP seedling of Ambridge Rose. Hasn’t bloomed yet. 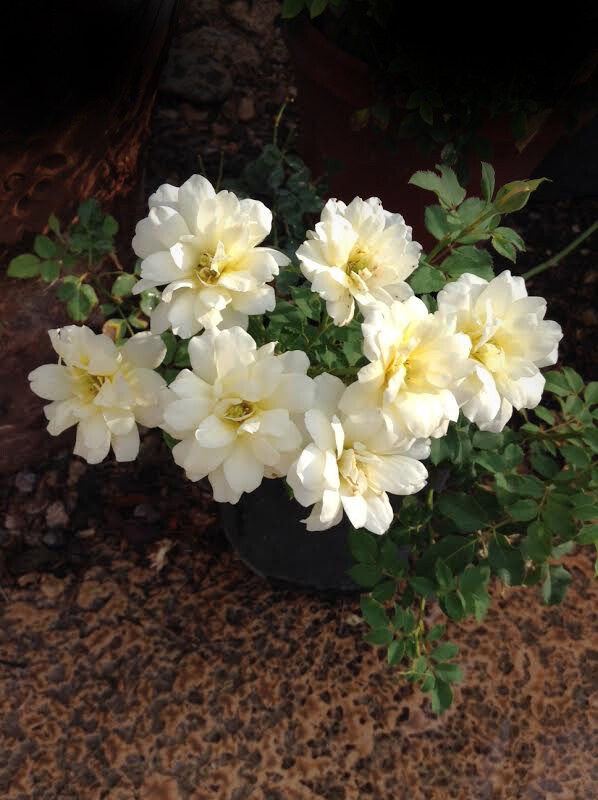 Oh Judith, you have my sympathies. I’ve spent 65 years in Texas and I still don’t tolerate the heat well. Hope you have a few standouts after the week is over. I agree with Philip I need to stop complaining about Texas summers.

Thanks! Actually, personally I don’t mind the heat. The babies and lots of the roses are not quite so happy about it. It seems as if they are less tolerant of under AND overwatering, so I need to pay a lot of attention to them. I’ve already lost, or almost lost most of the seedlings that remained up in the nursery. Still there are a bunch that I had selected out that are (so far) tolerating the blast furnace. And my Sweet Milo (Rt. 66 seedling) is blooming now, as is one of my mature Fabulous! seedlings, code name Purity. The outstanding bloomer this week though is Halo Glory. It’s in full bloom. I hope he passes on that trait to his progeny because I have some really nice seedlings (previous thread) from the Show 'n Tell x Halo Glory cross, and this is their first summer - so the big test is on!

Judith, it sounds like you are aiming for roses that will thrive inside of a hair dryer, but when you consider species, one I’ve been lusting after is R. abyssinica – the African species in the Synstyllae. It’s essentially a desert mountain species, but as far as I know, the only purported specimen in the USA is the one Basye used for his amphidiploid. It isn’t the stout shrub one sees in African deserts, but a climbing monster in Santa Clara. (It’s hard to know if it is the same species from photos, but seems to reason that in a more amenable climate, it might behave a bit more… ah… enthusiastically.)

Basye’s amphidiploid might thus also have some value, if you are game to go back to species.

(I can’t imagine you don’t mind the heat, unless you’re saying you stay inside in the A.C. all day admiring your garden through the window… Bright side is you probably have fewer skeeters. Ugh. They are what is keeping me indoors.)