I ended my intentional crosses at about 280 with a hip and seeds added here and there for a total of 800+ seeds. I labeled each cross on the stem of the hip with a label maker. Data entry was done with google docs in case of children breaking the computer.

While not completely finished we entered the data into Tableau. (My husband works for them). It allowed us to take a quick look at the information. 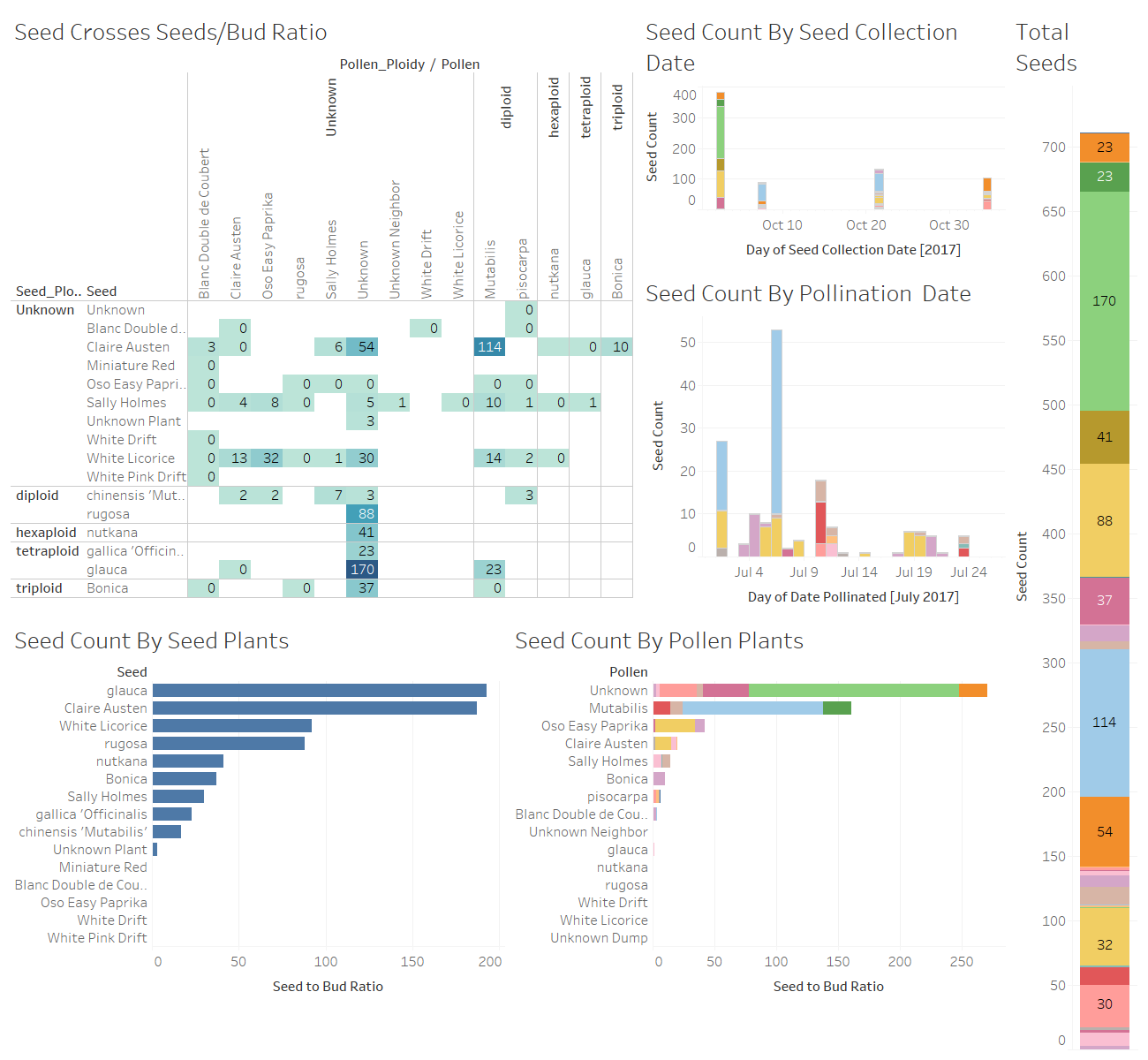 I planted about 4 different groups spaced out late October through December. Some I had shelled and sitting in a drawer for about a month. Others were planted much quicker. I planted directly into 4" pots or others I have on hand into a mix of about 1/3 vermiculite (or sometimes perlite), 1/3 potting soil, and 1/3 peat moss. The pots went directly into a temporary backyard greenhouse and I placed a heater in there to turn on low on chilly nights. I’m using a sensor push wireless thermometer to let me know how things are going in there. 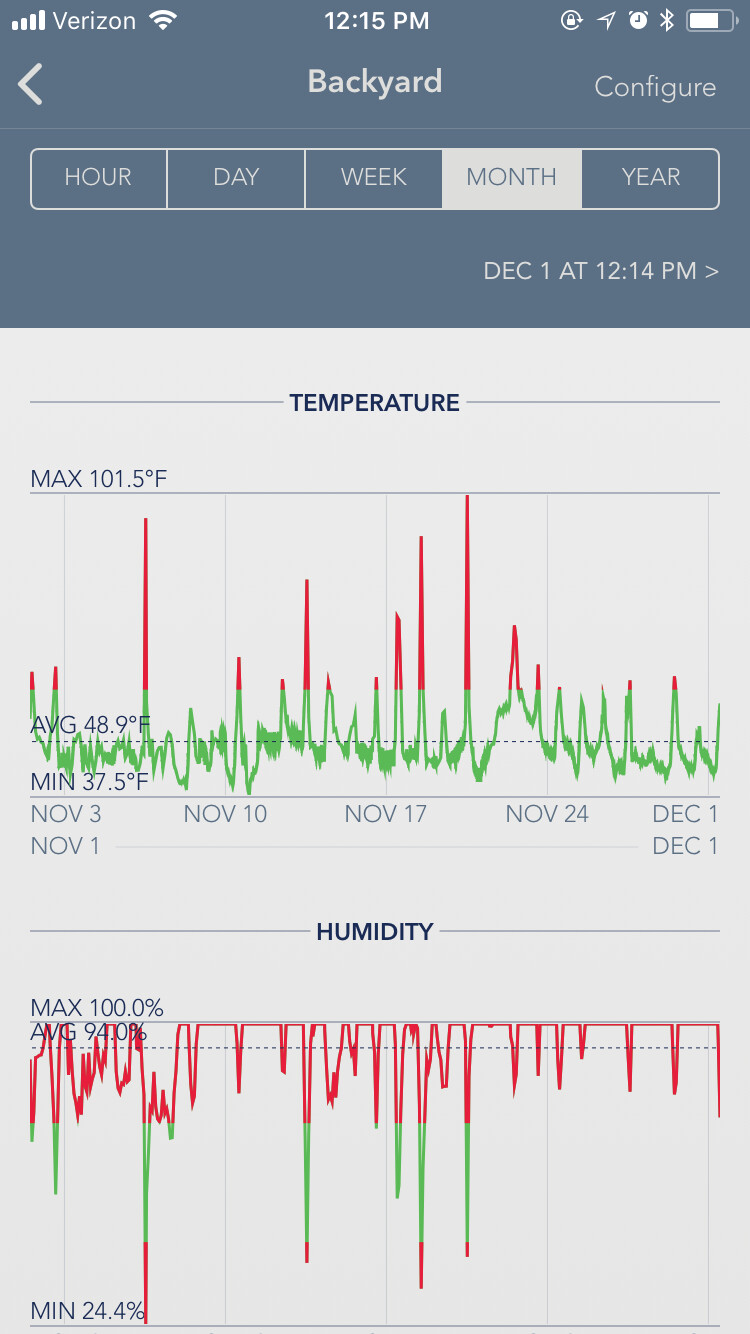 I need to work on not letting it spike too high!

Your efforts look to be hyperfocused on your local species roses which is great to see. If your posted records show us your full stable then it looks like you haven’t yet decided on a particular breeding strategy except to cross everything you have with everything you have. Have you given any thought as to formulating a strategy as to how to arrive at your stated goals of hardiness, disease resistance, drought tolerance with scent and long bloom time?

Consider using the name of each parent rather than a code number in your record keeping and labeling. It requires a lot of mental effort to remember which number is which cultivar which inevitably leads to errors in recording crosses. Second generation plants will have a number, of course.

Nor is there a need to record and number individual hips or to record the specific dates at the that level of detail. The record keeping burden quickly becomes onerous especially as parenting becomes more demanding of your time and attention.

For a given cross I record: date, male, female, number of pollinations. At harvest I record the male, female, number of hips collected for that cross, number of seeds total. I don’t necessarily germinate every seed every season so I record the number of seeds of a cross that I do try to germinate and the number that sprout. The ones that make it to the field get eyeballed a lot but I have even stopped making individual notes for each plant and only make notes for exceptional characteristics useful in breeding. I do photograph each plant when it blooms at some point including the canes and foliage.

I assign each cross an accession number and use that number as the identifier in the f1’s, thus:

Resulting plants get assigned the cross number as an identifier. Assuming three plants from the above cross each is numbered:
1002-1
1002-2
1002-3

Hi
I tend toward simplicity. I find numbers and codes to be a lot of cognitive work to keep track of, so I identify each parent with an acronym based on the plant’s name: Bonica becomes BONI, Golden Celebration GCEL, Easy Going EAGO and so on.
With each cross I just note the date and the pollen parent on the tag of the female flower I’ve just pollinated, IE if I pollinate, say, Floral Fairy Tale with Bonica, I just tag that cross with “BONI Jun3” using Avery labels and a Sharpie. I know the seed parent is Floral Fairy Tale for as long as the hip is on the plant.
When I harvest the seeds I place them in a baggie with a white garden row marker (Kim Rupert’s trick) marked with FFTxBONI. When I plant the seeds, the white garden marker goes in with them.
F1’s become FTBO1, FTBO2, FTBO3 until they’re worthy of having their own name.
I don’t keep a database. My operation is small enough that I don’t feel I need one- either the seedling is worth keeping or it isn’t. If it is, I know who its parents are.
d

Don, How did you guess my initial strategy?
Seriously, though. Crossing everything allowed me to see how plants were behaving on a twice daily basis. I learned a little bit about how the pollen and stigma responded in a few different varieties. Also, that I had to be really quick with some of the species! I’m sure I will streamline the cross naming as I go on, but I didn’t find it particularly difficult with the google doc app on my phone. As for the hips, I’m quite happy to keep them separated for the moment. Getting a rough idea of seed per hip count (and eventually germination) might help me for space planning later on.

I will be leaving my goals fairly broad now, but having a few more native rose ‘cultivars’ that fit into the landscape would be lots of fun to develop. So with that in mind, one of my next steps is to get some miniatures established and cross with those. Just to kind of range the plant shapes in and see what traits can be passed along. (Thanks Kim Rupert for the tip!). I’m finding that R. chinensis ‘Mutabilis’ is doing really well here and I had some blossoms even a week ago. It was proving quite a stud as far as hips go and am considering this to broaden bloom time. Plus it was planted in part shade. Now, thanks again to Kim Rupert, I know I can freeze pollen from Mutabilis and save it for more pollinations.

All of this is without a single seedling… Just sugar plum visions right now.

You’re welcome Sarah! Depending upon your conditions, you don’t HAVE to freeze the pollen. I am collecting pollen right now for spring use and allowing to just dry on sheets of paper in the formal living/dining rooms where the sheets are safe from being accidentally spilled. That’s how I succeeded in collecting enough from Minutifolia and Puzzlement to actually do anything with. They remain dry and usually in the mid sixties to about seventy degrees and there are no breezes, dog tails, cats or clumsy people passing through to blow or knock them off. I considered freezing pollen and actually obtained the packets of silica gel, then chose not to due to the probability of the pollen being messed up in the freezer and having to pre plan its use so it would be completely defrosted prior to the containers being opened to eliminate condensation. Right now, if I wanted to pollinate a bloom, all I have to do is pour the drying/dried anthers from the paper into a baby food jar and go accomplish it, then dump the material back on its sheet of paper to await further use. Being left open on the paper prevents any molding or condensation. Peter Harris’ “Jurassic Pollen” experience pointed the way and I have to say, it HAS worked. Sometimes some of the pollen donors’ anthers don’t dry quickly, but leaving them for weeks to months out in the open, they do eventually dry and shed their pollen.

I think Kim in CA has lower humidity than I do in NW Minnesota. I like to use pollen that’s been out no more than 24 hours, max 48h, and if I freeze it I put it in an airtight vial with color-changing dessicant beads to ensure dryness. I don’t have hard stats, just a feeling, about the pollen viability degrading in my environment.

Perhaps, Joe, though being nine miles from the Pacific, we can have “humidity”, but likely not what you have there in Minnesota. I wonder if a food dehydrator may be of service?