In my experience, reds with a yellow reverse behave quite differently in breeding. I have just not tried a stripe on one yet.

Here is photo of Grimaldi x 1T20. If you look closely you can see a few streaks of white in among the stipling. I only had a few seedlings from this cross so I didn’t get a good sampling of the segregation of stripes or stipling. This is the only one I kept and I almost lost this one because of grubs eating the roots. 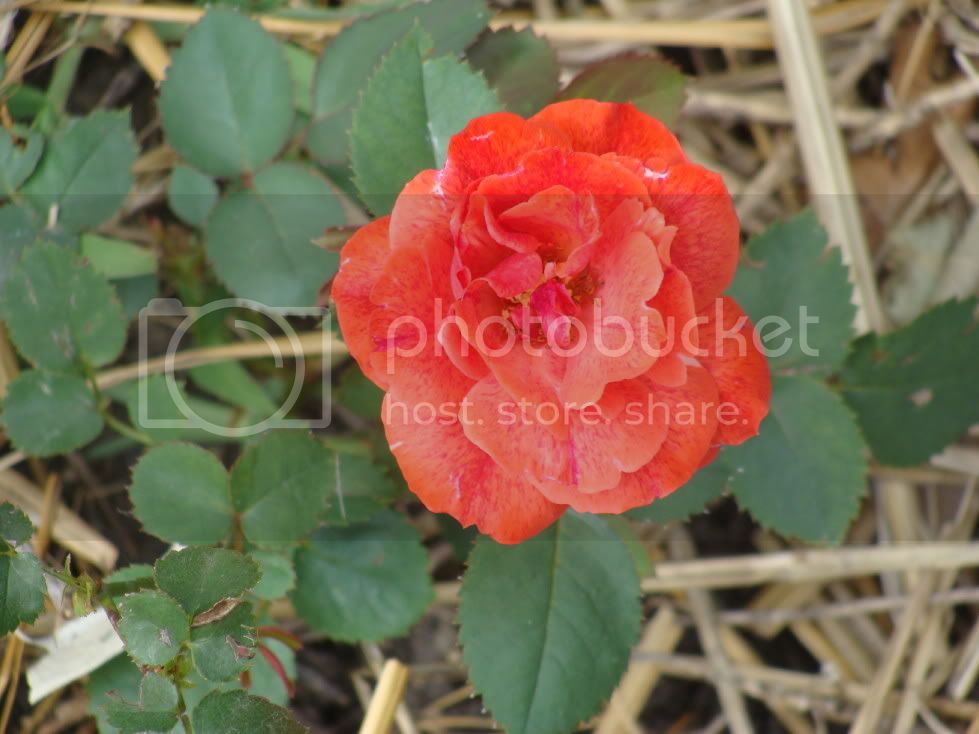 Speaking of reverse colors, stripes seem to be independently inherited on reverse as opposed to the upper surface of the petals. Some seedlings have striping on both sides, but many have striping only on one surface.

Calico is a bicolor, but not red. It made George Burns.

Playboy is a picotee as well as a blend. It isnt a true bicolor, though. It made Scentimental, which not only can produce orange stripers, but also can have orange or dark red in its bloom variations throughout the year.

Lifelines is from Hot Tamale, which is another pink/yellow bicolor.

I think those get as close as I can find to your question.

One of the other flowers is beginning to open… it looks to be a strange whitish bud with some pink and green through it… most likely similar to the one Robert says was guard petals previously. Looks to be almost white.

Thanks Dave and Jim,

Stippling has been more difficult for me to obtain than striping. The problem with stippling is that it seems mate dependent and it is also dependent on climate/season. I wish I could find better combinations for expression.

So far, American Honor x Sevilliana has brought me the best match, but the expression is still not good enough for me. I believe that the expression is even remotely strong because of the multiple layers of petal color in American Honor. Livin Easy x Sevilliana, multiple variations with handpainted roses and variations with all of the Icebergs have been disappointing. Crosses with Pretty Lady have been “okay”. I may back-cross Sevilliana x Pretty Lady with American Honor x Pretty Lady, but I still feel that a component is missing from getting truly great stippling. I may try Sevilliana with Cinco de Mayo. I cant think of another rose with more strong colors in its background than Cinco de Mayo, lol.

Meilland has two nice recent stippled intros I do not grow: “Michel Serrault” and “Pierre Cardin”.

Apparently only sold in France.

George, the striping on both sides of the petals are independent of each other, so that when looking from the top, where striping from the bottom overlaps, you get an apparent darker color variation on the top of the petal.

‘Life Lines’ is a dark orange and white striped climbing mini. I haven’t used it yet in breeding, but may try it next year. For stripes it seems harder to get a good amount of contrasting lighter color in the blooms. I think this one might help in that direction.

‘Little Artist’ has produced some stippled seedlings for me as has ‘Space Odyssey’.

Jim, ‘Life Lines’ and other great roses you have created, hint to me strongly that you are definitely into painting and re-decorating flowers!

I love the orange/white combination. If you could combine the hulthemia dot with the radiating stripes, I think you would have a ‘star with stripes’ in your hands…and a climbing version of this would be very spectacular.

Look like I spoke too soon about not getting any stripping

Two of the remaining five seedlings to flower are almost open… and it looks like they will be striped.

Would you show pics of the fully opened blooms of all the above seedlings? Please? How prickly is Papageno and the seedlings in general? Another question. I realize these seedlings are OP; now the question is who is the daddy. Is Papageno relatively isolated; if not which were the closest roses to it? Still enamored of those opening buds you showed!

I would expect that even though ‘Papageno’ is planted in a bed full of roses daddy is likely to also be ‘Papageno’. Growing immediately adjacent to ‘Papageno’ is ‘Just Joey’, ‘Scabrosa’, ‘Blushing Pink Iceberg’, and ‘Kardinal’ though given the insect-life we have around here it could be any one of several hundred roses (though I would still put my money of selfing). It isn’t any more (or less) prickly than most HT though is relatively smooth up near the flowers (I picked Alicia, my long suffering wife, a bunch of them yesterday on long smooth stems with two or three flowers per stem… they last well in the vase). The bush is relatively clean here (I don’t spray) and in my garden grows with a V-shape at this stage of its life (2 years in the ground), to about 1.5m so far. I don’t prune it really, except to dead-head non-pollinated flowers and removing dead-wood. I think it was Botanica that says the plant grows long lax canes… I have not seen this so far. Canes are thick and stout on mine. Mine is grafted though I have a number of own-root cuttings that struck easily and seem to grow well on its own roots. There is no scent to speak of.

Thank you Simon for the information. I have a “thing” about blends and bicolors which your seedlings show.

I love your Chicago Peace x Cabana. It looks windtossed because of the ruffling of the petals. I would envision of large bush of that would be a “knockout” in anyone’s garden. Single blooms seem to carry better from a distance too.

Thank you so much Jim, I don’t really care for singles but I am keeping this one for breeding.

I have noticed that in certain striped crosses that the later blooming seedlings have a higher percentage of striping (like what you are seeing here). I don’t know whether it’s because they germinate later, or just bloom a bit later. It might be something though to sort out.