Too Many Jurassic Park Sequels … ?

Been watching this very strange cane.

It originates from centre of a “spino” l have grown since 2017/18. Rest of plant healthy and normal. A thick furry cane is a shock but mini widely spaces prehistoric looking leaflets on a giant trunk raises suspicions all is not right.

Only thing comes to mind is some Arctic version of the mite.

Any thoughts - no chems used l am aware of. It will be pruned but curious if somebody seen it before. 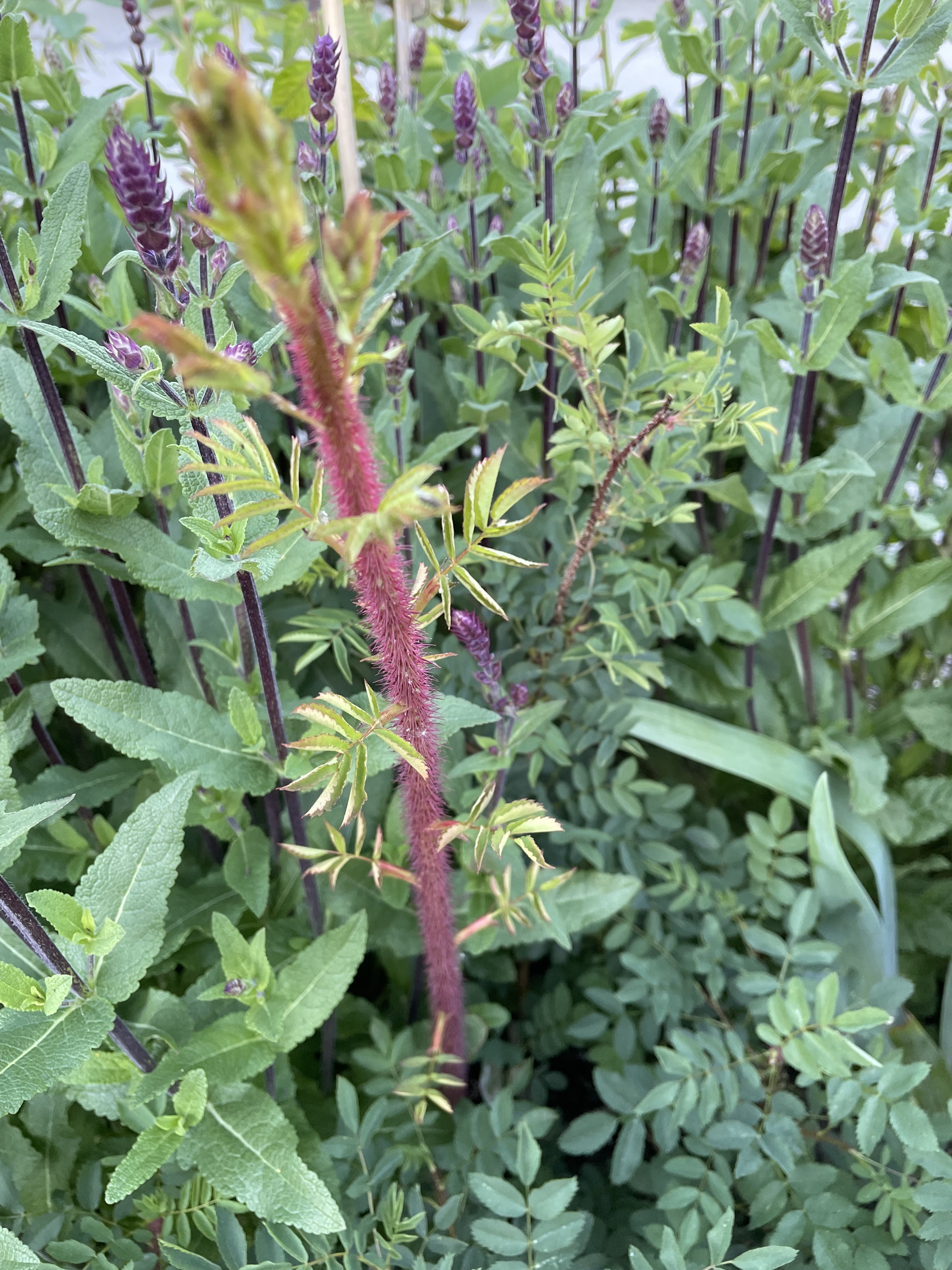 Whoa!! That is quite a sight!
I have to say I think the thick furry red cane looks pretty cool, in an unsettling kind of way.
Can you see where exactly it is growing out of? An image of the base of the cane would complete the picture, if that’s accessible without harming yourself with all those thorns!
I’m obviously not one of the experts here, but I heard one of the telltale signs would be if the new cane is thicker than the one it grew out of. Also curious about when this cane first appeared.

Bonjour Riku
I don’t think there is a problem with this sturdy stem. In your photo the foliage of the two plants “spino” and “dino” are very similar. Several years ago I harvested a spontaneous seedling growing between Jens Munk and the Métis rose bush. The new shoots of my rose bush are very similar to those of your “dinosaure”, as you can see in the photos. If I remember correctly the hairy red shoots of my rose bush appeared after only a few years to my surprise, much like you. If this stem grows at the base of your “spino”, it may be that it has reached more maturity and can finally produce vigorous shoots. I agree with SeasideRooftop for a good inspection that might provide some answers. But I would wait before giving him the coup de grace!
André. 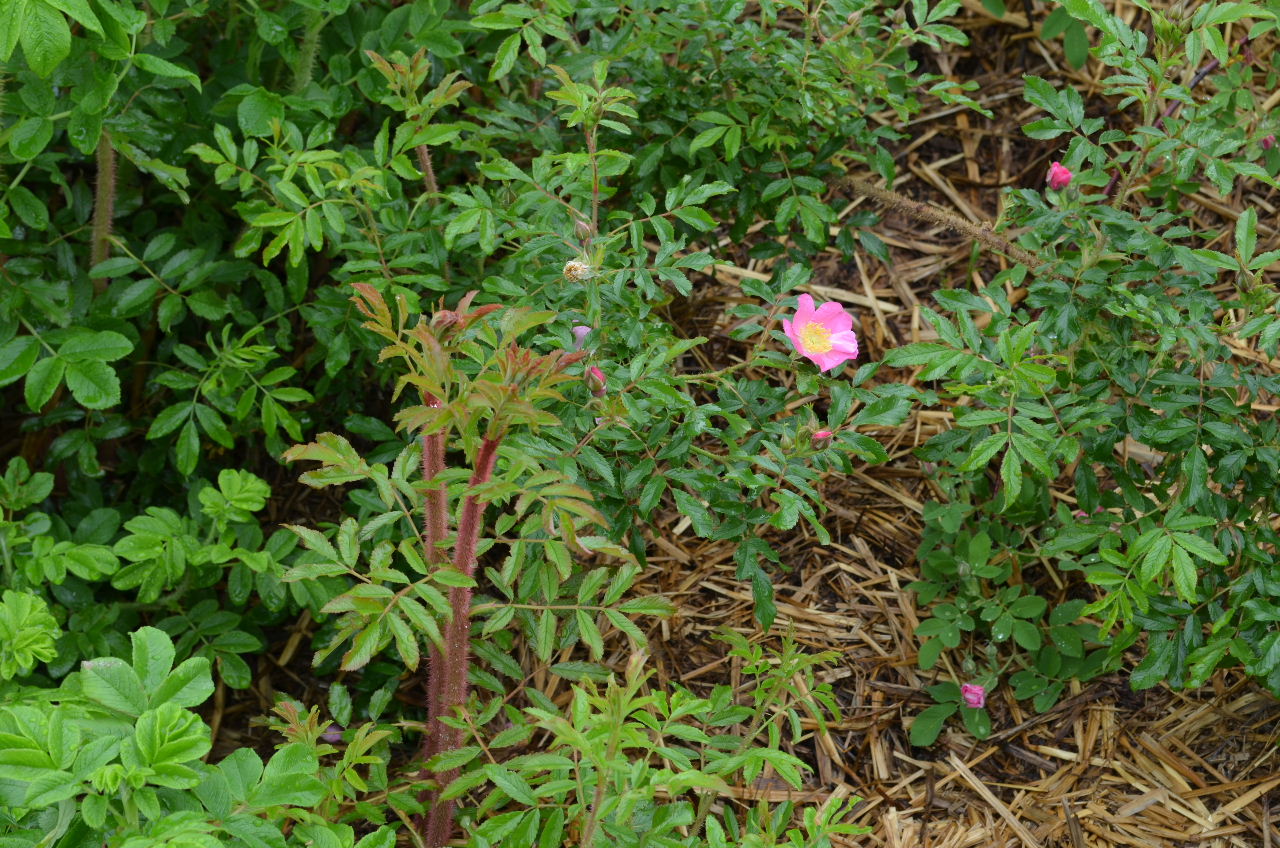 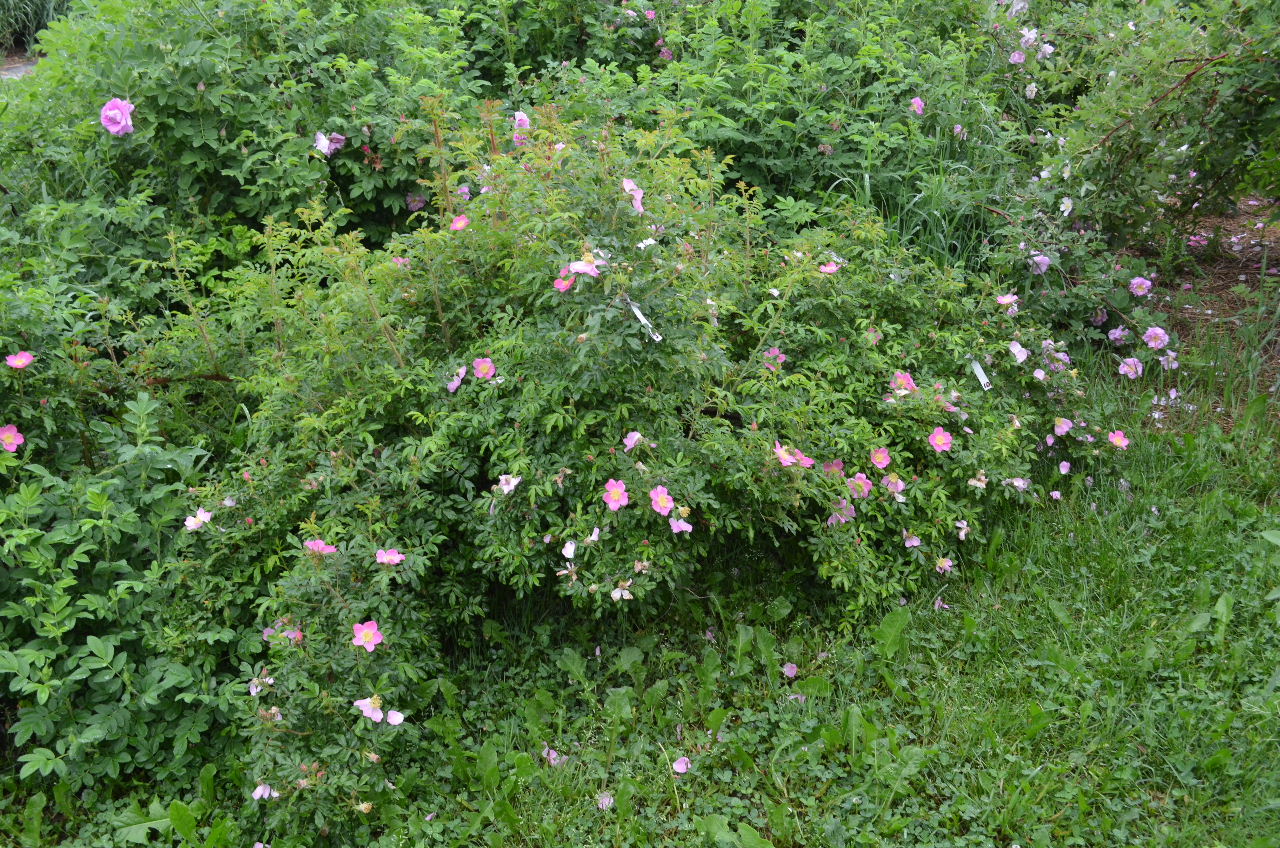 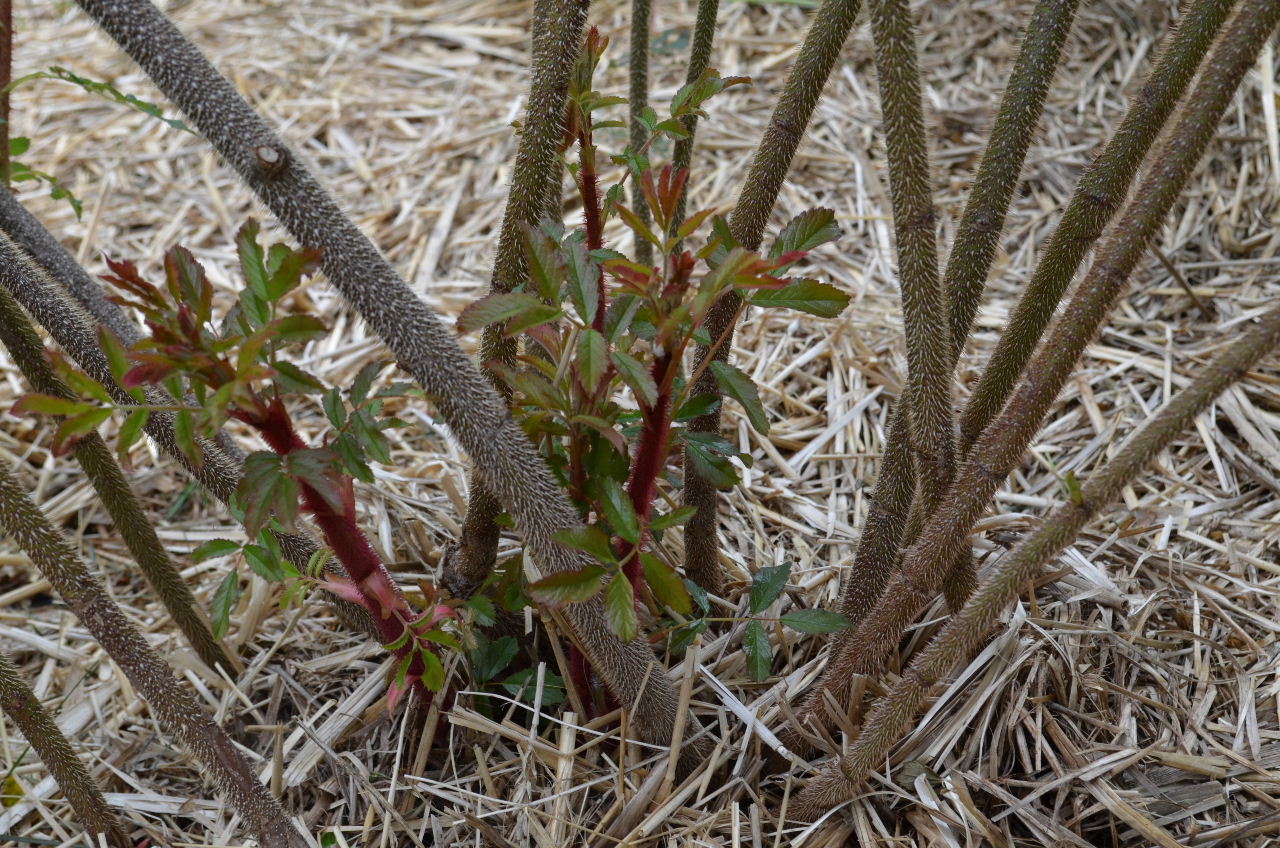 Excellent advice resulting in me taking a deeper look and putting the pruning brakes on.

The cane appears to curve underground into the crown of the rose (crown covered). Meaning to me likely the cane is same as mother rose and has decided to leap in year 4 … was moved once so slow by a year? Now l am seeing what the maturing rose will grow to.

It an imported Finnish origins spino, and mine has young yellow single blooms that fade to white. Tagged as “Lutikkaruusu”.

Before this cane showed up l would of claimed it was a small bush with a nice tidy form … a first mini spino … with large buds and bloom size … fortunately did not claim that in print.

Andre its planted beside Butterball by a lack of planning … but now side by each comparison potential. 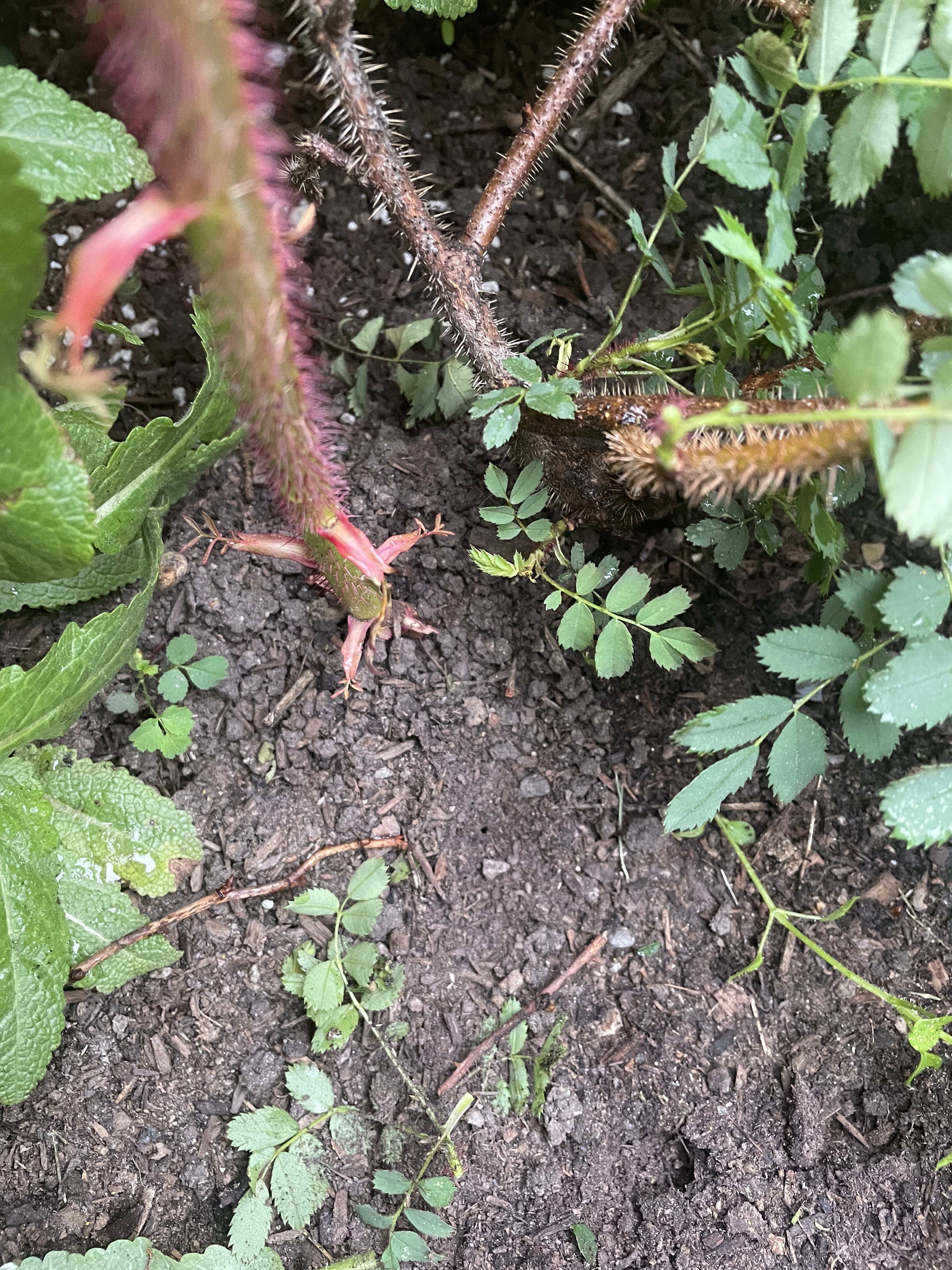 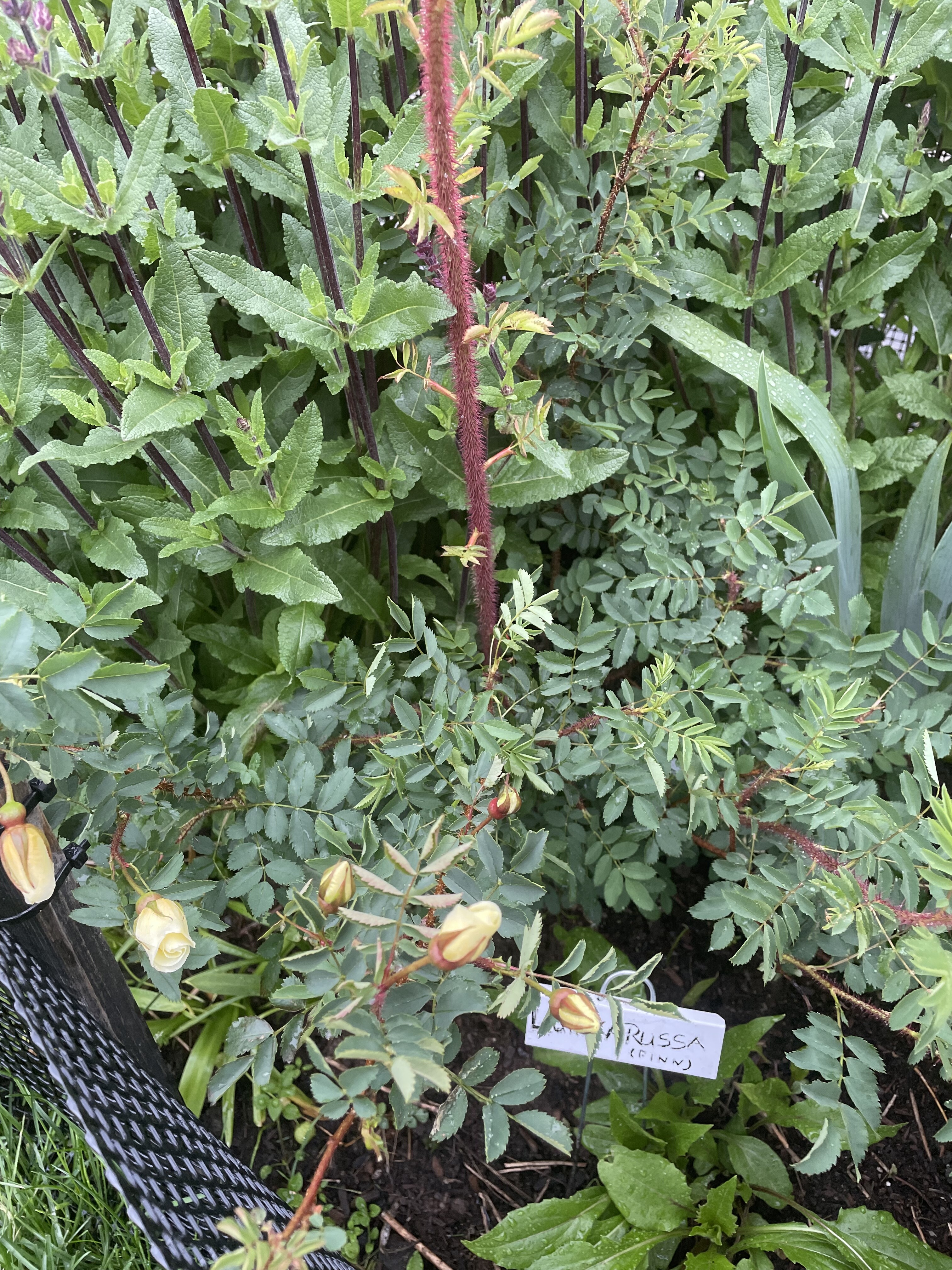 I kind of like it. Would mix well as a single specimen at the edge of a forest for a perennial border. I love Rosa primula for this. I often see Wing Thorn used for this in botanical gardens of the Pacific NW.

Sadly, not of high commercial interest, but sometimes you will see even places as popular as Portland Nursery selling Wing Thorn.

My R. primula (Pickering) has a prominent place in the front yard for the last 10 years.

There is a good level of hardiness. Though has gone to ground once.

However it has been a challenge for last 5 years to keep healthy looking due to a susceptibility to rugosa like leaf yellowing to nearly white / albino shades (chlorosis?) of some cane’s top half leaves - which do’t fully develop and soon after, burning of these leaves.

Heavy glaciolacustrine clay below my home made soil. Odd part is my other “near and far eastern” species yellows don’t have this problem. Adding man made fertilizer / elemental additives don’t clear issue.

Wont part with it or move - leaves on own accord. 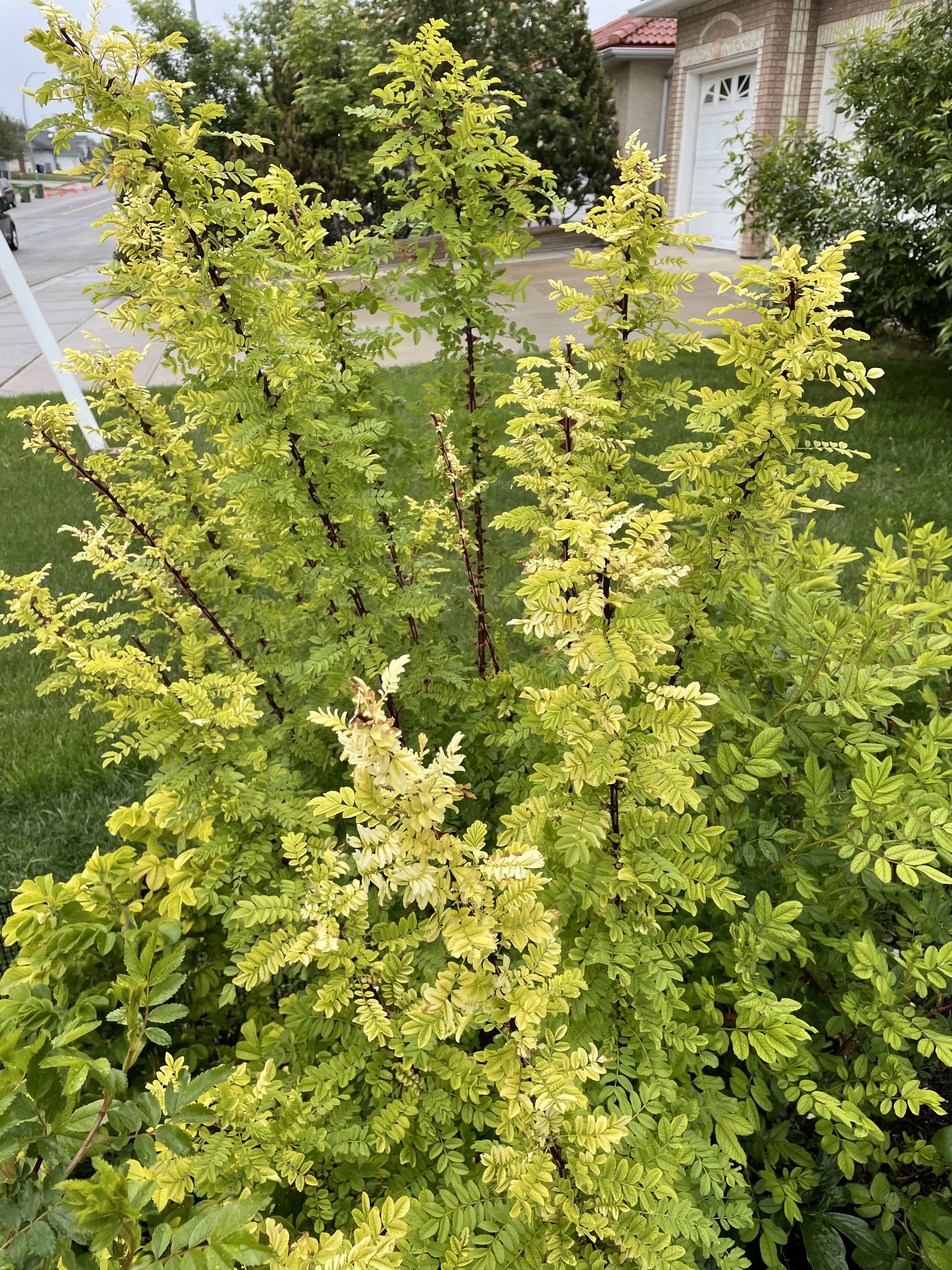 Riku that’s actually rather attractive, like a Golden Locust or something.

Ah,Sensei, thank you for educating this little grasshopper on the “Golden Locust” beauty potential within the rose.

Now know the right answer for explaining the unusual tri-tone color of the foilage. its in the a.k.a. Rose name. Its golden color hops around a lot depending sun’s position.

Crikey l be asked for cuttings by neighbors when l explain the color enough times.

Beautiful color, but I will confess on the topic of “deeper looks” that I might have been breaking out some ironite or such.

Ironic in view of posts of yesteryear in which I was asking about any potential for/existence of truly chartreuse “golden” foliage in Rosa. Backed with something having strong bronze-colored foliage, that could be a very striking bush based on foliage alone.

Txs l always default yellowing to lack magnesium/ manganese and alkaline soil. … which in hind sight does not make sense with all the limestone and dolomite fragments around. Definitely alkaline soil but lots of organic added this spring (3inches).

Now refreshed that it points to iron with this rose. Order chelated iron to see if a good change.

Question Phil, no liability assumed on your part, l take all risk - in case u worry about those things.

Do you add to soil around rose or foliar treatment?

Reason l ask only dosing instructions for chelated version is foliar feeding and grass. Total iron 5% as Fe, chelated 3.5% and soluble 5%. Don’t care about sulphur (3%) … alkalinity will take care of it.

Won’t try foliar on afflicted rugosas hybrids that are anemic. So soul drench for R. Primula and rugosas at foliar dosing recommendations as a safe test… maybe

Again thanks for your sublet suggestion of what to test.

If not able reply in 10 mins

(just kidding), l am going with 1 oz per gallon for soul drench …

Its working on R. primula at 1 oz per gallon (l think US gallon). Used 2 applications 2 weeks apart as “soil drench” since July 12.

Rugosas in front and in picture looking slightly better (all in garden same dosing and period).

Avoided spraying rugosa leaves as had many defoliating episodes in the past. Even from miracle fertilizers spraying. Not sure if chemical or leaf crenelations, and residual water causing lensing of sun. 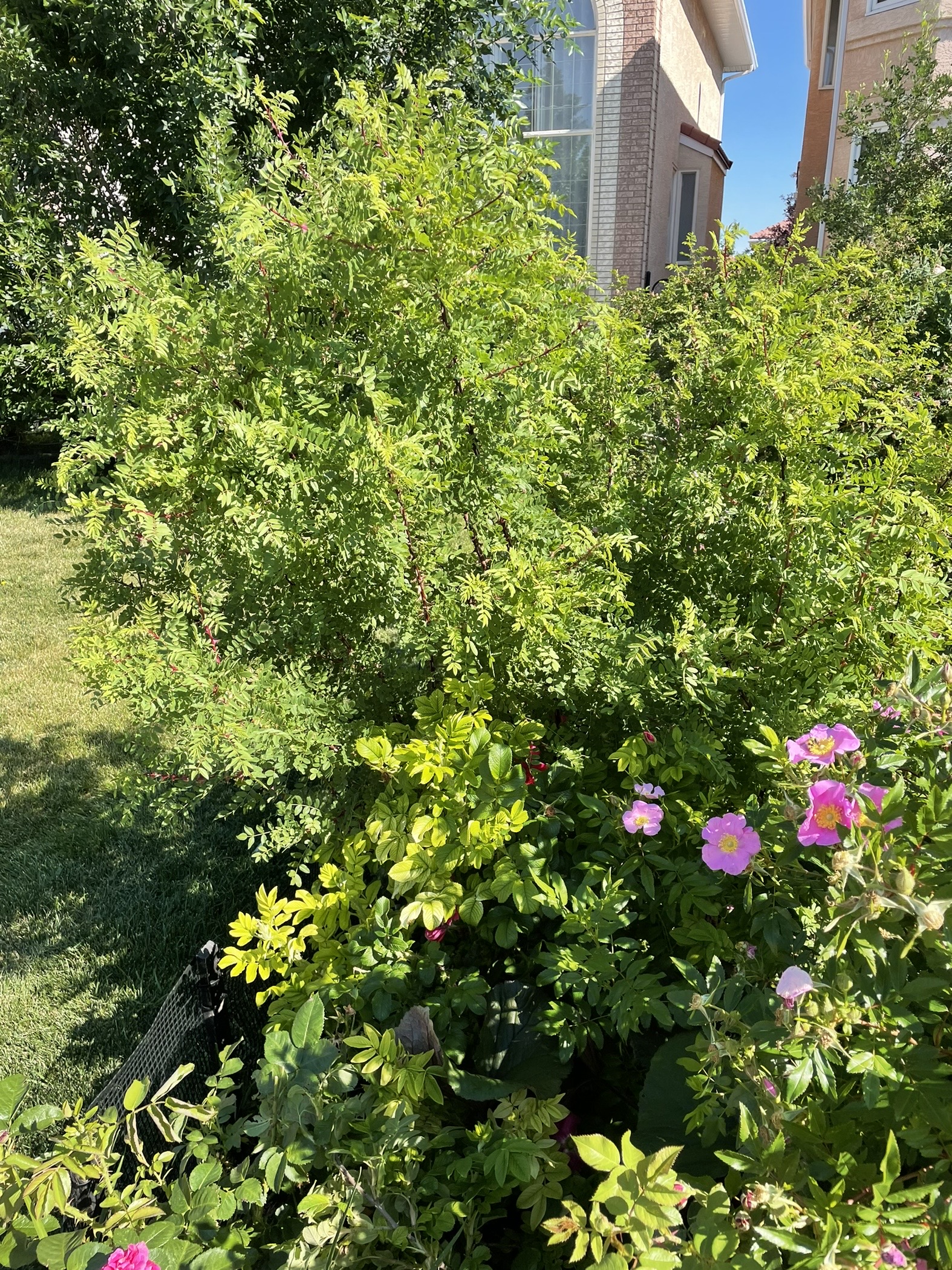 Sorry. A bit late on the reply.
I try to remember to put green sand in soil when planting. Otherwise I have used a liquid fertilome product with success. (I have relatively few cultivars that I know are prone to chlorosis.)

I assume you use glaucous sand, or olivine based sand (eg. lots of locked up iron in it - Green Beach sand, Big Island of Hawaii example). Tempted by it to sample but declined, as l understood indigenous wrath of Peele would follow me home … life can be challenge enough with her wanting her green sand back.

The leaves, at least, look like they have rose rosette disease. Proliferation of prickles is another symptom, magnified by the naturally thin and abundant prickles of spinosissma. I’d consider shovel pruning the plant, perhaps grafting a healthy bit of it first if you want to preserve it.

Txs for observations and suggestions. I’ve let it grow out since photo. Though still not convinced that it is normal.

Top half of cane looks “normal-like”, pruned off and disposed of bottom dwarf leaves. No other canes have erupted out yet so my jury still out. … that and in a disjointed action plan l tossed out three roses who looked like rootstock - lost grafting freebie rootstock practising opportunity - tick me off l didn’t mull over options before ditching them. 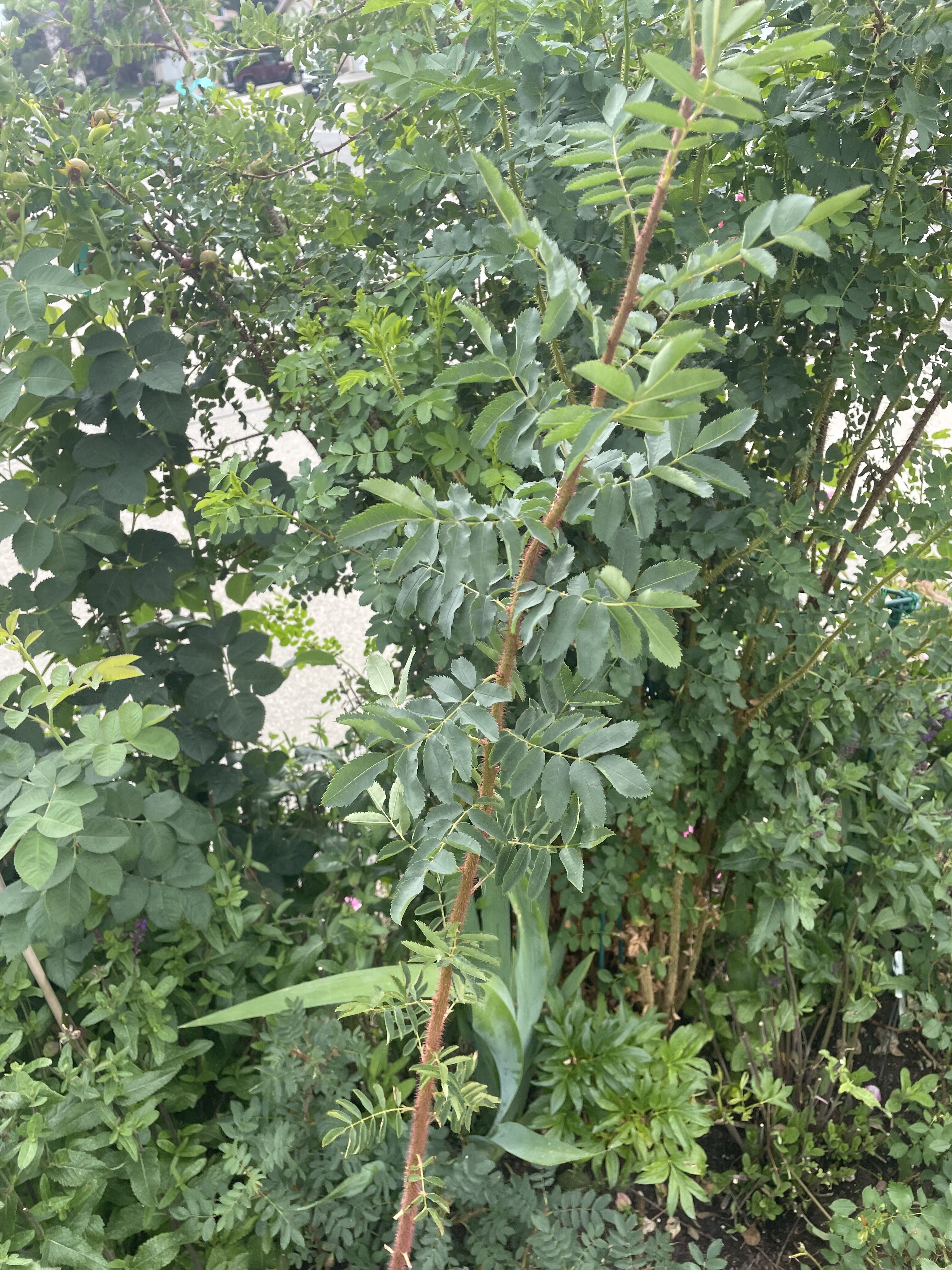 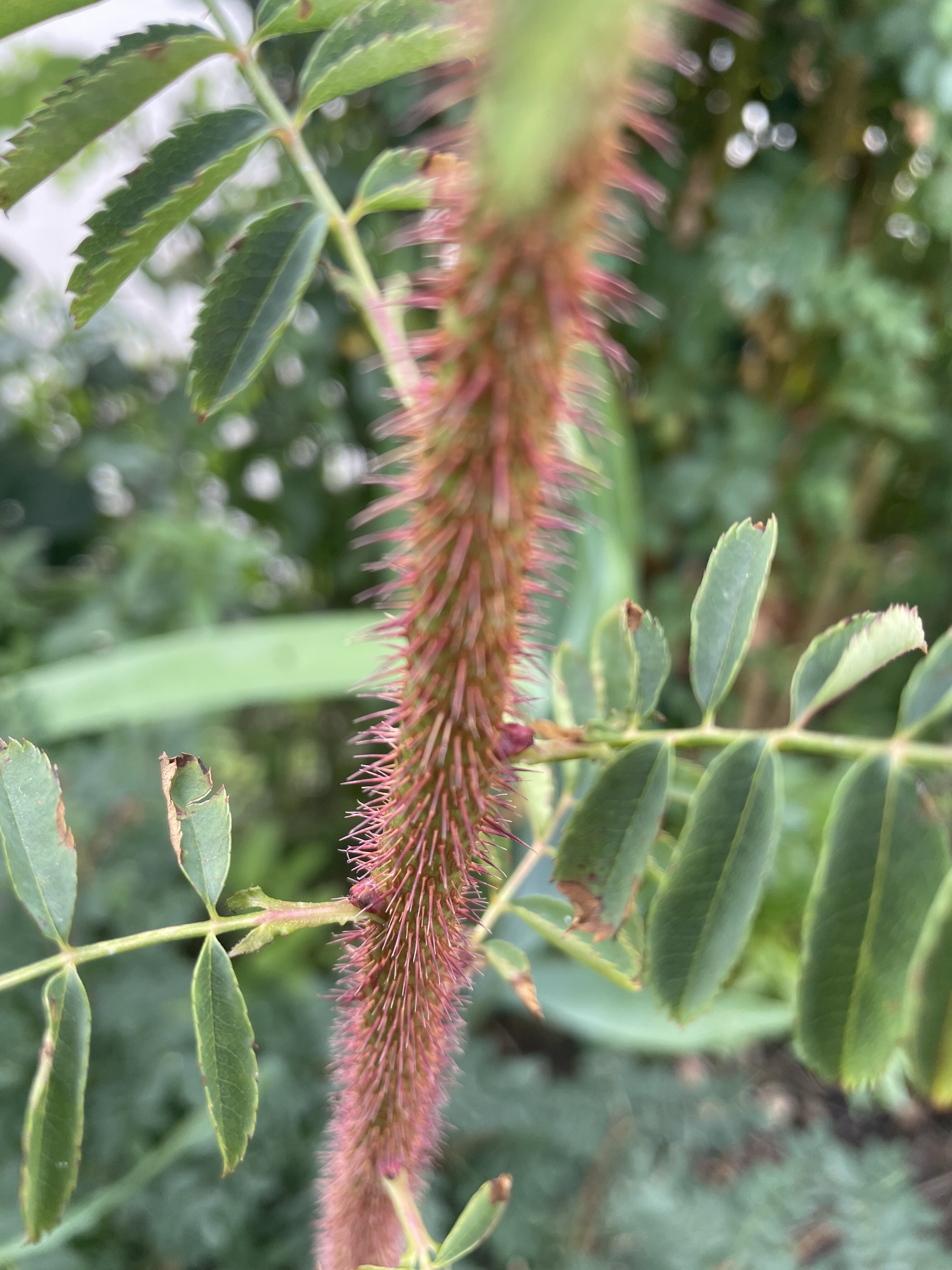