Reading about Chrysler Imperial spiny canes, reminded me of how Brite Eyes behaves in my garden. Quite typically, early in the season normal cane appear from various places on a trimmed, or untrimmed bush. That depends on the previous winter. While the first canes and flowers seem normal, secondary shoots emerge right at the base of the flowers ( down one or 2 leaves) with a lot of spininess. These relatively stubby canes may carry several flowers which seem normal. And more such canes emerge from them. This sure looks like early stages of RRD. But the same one bush has done this for most of the years since I got it from Joe Bergeson, none of its neighbors has shown characteristic RRD.

Is this kind of thorniness of upper shoots/canes normal for Brite Eyes? It is not like what was shown in the Jurassic Park thread or the Mr Lincoln thread, where the basal shoots seemed to be the affected ones, not the secondary laterals.

Hi Larry Davis,
I don’t know about Brite Eyes, but yes, on HCS the lateral shoots are affected too. All new growth is like this. See the pic below from this morning. 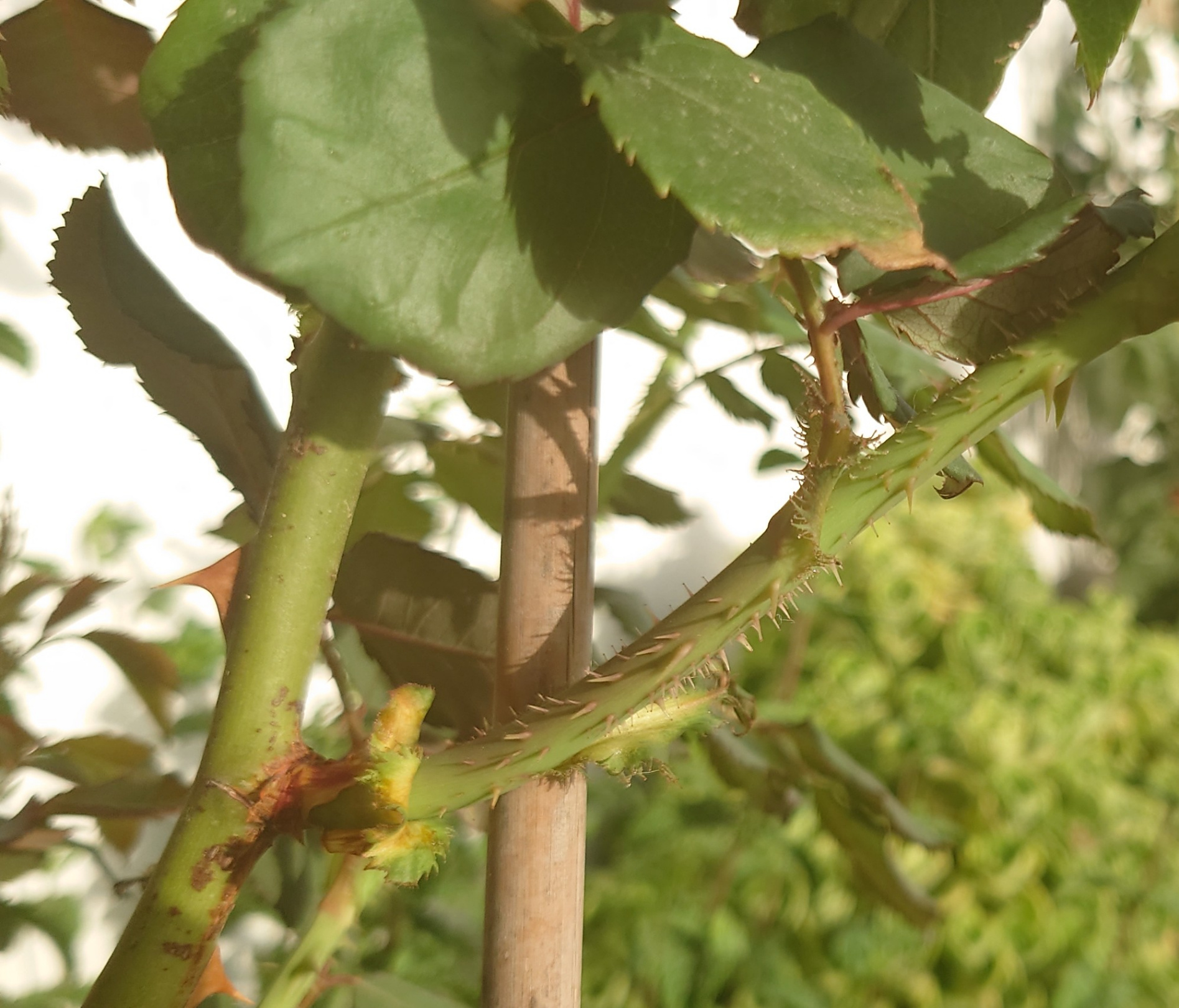 However, the flowers have been normal, in spite of the weird new glandular/bristly appearance of the buds.
So I think Roseseek was right, it’s a mutation whereby the rose is remembering a previously unexpressed part of its genetics.
I don’t know about Brite Eyes’ seed parent but her pollen parent Abe Darby is definitely thorny, so it might come from that?

I keep my Brite Eyes in a pot for pollen donor only (cause I need another climber like I need a hole in my head…), and it has remained consistently prickly each year on all canes. Same coloration as the 2nd pic on HMF by “worknjoe”. Canes tend to become tan and reddish, but no indication of any winter cane diseases. Zone 8B, temperate rainforest, so your mileage may vary.

But, yeah, no erratic change in prickles. Consistently prickles from head to toe, and they LOVE to catch dog tails. It’s like magic…

I am keen to state that if one has a climber on a fence shorter than it, that the top 3rd may trend different due to wind exposure and difference of temperature pocket below the fence line. A drastic difference to the tops of all of my lilacs are like this, as well as my (Playboy x Rosarium Utersen) climber.