The future has arrived! 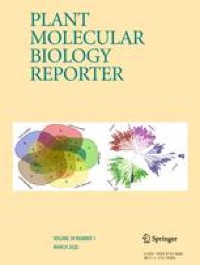 Powdery mildew is one of the most important crop diseases worldwide. Genetic analysis has revealed that mutant alleles of the Mlo gene cause broad-spectrum resistance against pathogens found in cereal. In this study, the possibility of inducing...

If you scroll down to the reference list of the paper you’ll some interesting topics in the titles. This is not the first time such a gene inactivation has been done, though it is the first in a rose. The two groups doing the work are far apart physically and I believe the Wuhan group provided the know-how for plant regeneration. They had done earlier work on somatic embryogenesis using a hybrid tea Samantha. The Yunnan group is in the land of eternal spring some 6,000 ft above sea level near 24 N latitude. Flower breeding and production is a major activity. Doing the experiments required being able to regenerate plants after transformation. Evidently they know how to do that with R multiflora well enough to get a result on that first. I expect it to show up in interesting cultivars soon.

Ever wonder how soon before the skill and chance of the hybridizer is entirely replaced by lab work?

sigh The future is kinda depressing, if ya ask me…

Normally, I would look at advances like this as something that the amateur can build on for roses that are more suitable for his/her region. However, the idea that the originator “may” be able to patent the gene sequence even in offspring clouds the future.

An earlier, fully accessible paper in which Xianqin Qiu was junior author (along with Debener) lays the foundation for this later work and gives a description of what the MLO genes do.

Powdery mildew is a major disease of economic importance in cut and pot roses. As an alternative to conventional resistance breeding strategies utilizing single-dominant genes or QTLs, mildew resistance locus o (MLO)-based resistance might offer some...

Basically they tell us:

The paper that Henry posted reports on subsequent work by Xianqin Qiu (now senior author) in which the mutants were actually created and proved to be resistant to mildew.

I expect it to show up in interesting cultivars soon

Right after the patent shows up, no doubt.

Given the US government’s current regulatory intoxication it seems likely that agricultural trade barriers will remain for the foreseeable future. Perhaps an opportunity exists to identify natural rose MLO mutants (now that there are genetic probes available) for use in our classical breeding programs.

In fact, I wonder if we don’t already have a mutant or two among the hedge-clipper cultivars (like Knockout or Carefree Delight)? If I had a portable gene analyzer in my pocket the first place I’d look for natural mutants would be Kordes’ Grouse Immensee.

Has anybody managed to get a copy of this latest paper that Henry posted?

Don, are you saying that Grouse Immensee is mildew resistant? I thought mildew was supposed to be a problem for most close R. wichurana derivatives. I think mine has been clean here, but I don’t get much mildew.

I’m not sure that wichuraiana’s do mildew more easily than anything else but we’d be looking for MLO mutants and they could happen in any plant. For some reason De Ruiter ancestries are few but Superba is part polyantha anyway.

My gut feeling is based on Grouse (and The Fairy, so add that to the list to be tested) being behind a lot of the hedge-clippers which tend to be pretty rugged. They are disease tolerant but not immune which is an indication of horizontal resistance rather than race specific immunity.

With help from the drought, the aggressive and omnipresent PM is killing the dandelions in my neighborhood, yet Basye’s Thornless doesn’t have a speck. Several hybrid wichuranas will mildew here, but all of them have non-wichurana ancestors from classes or species that do PM. I blame the other parents, and/or seedling selection, since I can’t name a species which, treated in similar ways, doesn’t PM as badly here, and I can easily name several species that do worse.

Not that any of this indicates how PM may act elsewhere…