I have been waiting to see a blotch among many 11MWW, Lychee (as pollen parent) and Raspberry Kiss seedlings. There were a lot of 11MWW seedlings and not one blotch. I used Lychee as a pollen parent and no blotches. Lychee does seem to pass on its nice color and some smaller stature plants though. I had MANY Raspberry Kiss OP seeds stratifying this winter and only one seed germinated. This RR OP seedling may be my last hope for a blotch this season. Next season I should have blooms on several Raspberry Rugostar x Lychee seedlings from this season. Maybe there will be some blotches among them. I picked up Bull’s Eye a little late this season but I may get 1 or 2 OP hips to ripen.

Although no blotches among them, a few of the the RR x Lychee seedlings are nice plants/blooms/color. I’m assuming that they carry the blotch gene (resessive?) and when combined with a hulthemia hybrid next season, may turn up some blotches. I didn’t know that obtaining blotches could be so elusive.

Same experience here with OP 11MWW seedlings. I have some Eyes for You hips ripening - we’ll see if anything turns up with those.

You reminded me that I also have Eyes for You. I think with a couple hips late in the season. I hope you are successful obtaining some blotches Judith.

I found this on Jim Sproul’s blog regarding blotches:

When breeding for the Hulthemia blotch, I have found that when a cleaner rose is used in the cross (any of the Knock Out series, ‘Carefree Sunshine’, ‘Thrive!’, “G168-2” - the seed parent of ‘Thrive!’ and some others) that there are very few resulting seedlings that exhibit the blotch. It’s as though there is some other dominant factor that is inhibiting the blotch (which in other crosses the Hulthemia blotch seems to usually be expressed as a dominant or co-dominant type trait).

Of the ones that have bloomed, I used Morning Magic, Brite Eyes and Royal Edward, all of which I would describe as “cleaner roses”. Maybe that’s whey I didn’t get blotches.

A few members have noticed that the seedlings of some roses are almost always the same or nearly the same color as that parent. I wonder if that color dominance is also at work with your seedlings. It’ll be interesting to see what percentage of the seedlings have a blotch in the next generation, assuming you’ll be crossing some of these to another Hulthemia or back crossing to the parent Hulthemia. I collected pollen from Bulls Eye last year with the intent to use it in some crosses this year but because I moved, I wasn’t able to make any crosses this year. But I did bring BE with me and I’ll be able to use it in crosses next year.

The only cross providing a blotch for me so far has been Golden Angel X Eyes for You. The blotch isn’t intense and it isn’t stable, but it’s there. That’s about the only thing the seedling has going for it. 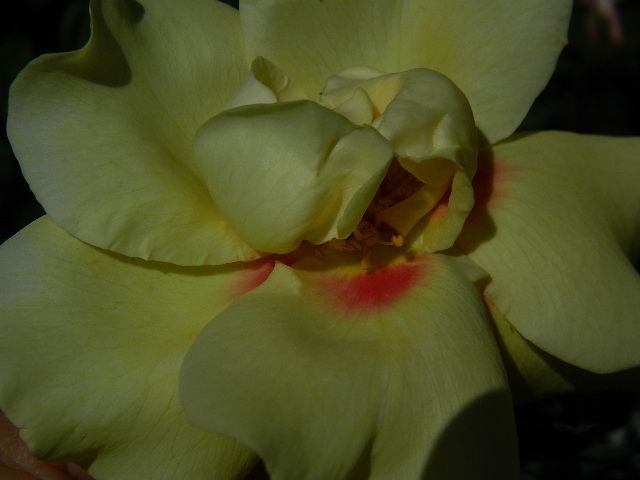 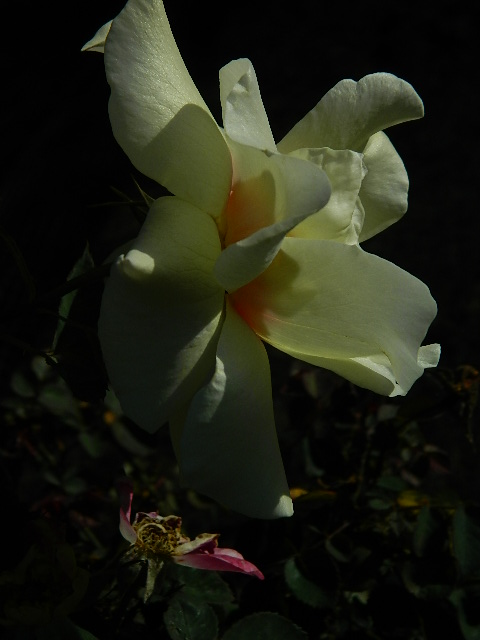 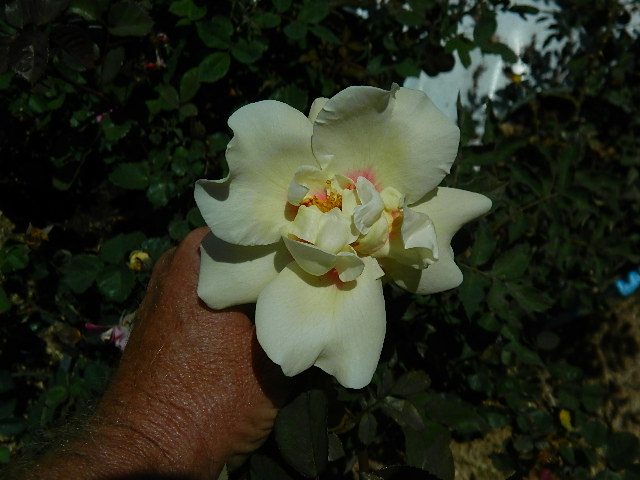 I likely won’t retain it, but if anyone else finds it interesting, I’ll be happy to share cuttings.

I’ll be using these seedlings to cross back to ‘Bull’s Eye’ and ‘Eyes for You’ next season and hopefully obtain some blotches in F2. In addition to possibly getting blotches in the F2, I hope to carry forward disease resistance from the seed parents from the F1 cross. Checking this morning, it appears that my one Rasberry Kiss x OP doesn’t have a blotch either. The only seedlings ledt that haven’t bloom yet have Lychee as the pollen parent. Maybe I’ll get lucky over the next few weeks.

Glad you were able to get a blotch!

Seems that Eyes for you used as pollen parent can pass on the blotch to the next generation, like it happened with this seedling from D. Brodie:
Blotch seedling.
And the blotch from Eyes for you should come from Tiger Eyes, which is probably the pollen parent of Efy (they say in HMF). Unfortunately none of my 20 seeds with pollen from Efy from last season did germinate. I’ll go on trying…

That seedling is really nice. There should be added resistance brought in from Simon Robinson.

My Raspberry Kiss x OP just bloomed and there is no blotch although there is a dark red circle around the filaments(?). I’ll keep this one to see if that develops into a blotch or at least because it should have some genes that could help produce blotch in F2. Still waiting on blooms on several Morning Magic x Lychee…

Just checked my Rasp. Kiss offspring to see if I kept anything with a trace of a blotch-I remember that I did see at least one sometime early this summer and I just had one bloom that is yellow with a tiny orange blotch that is also attractively phototropic. That is probably the best blotched offspring I got and you have to look to find it. But I am not going after blotches-they just are nice byproducts. I did find two almost whites with a tiny (get out the magnifying glass) deeper pink/red blotch, both of which are quite healthy. These blotches would take a lot of reinforcing to develop into anything.