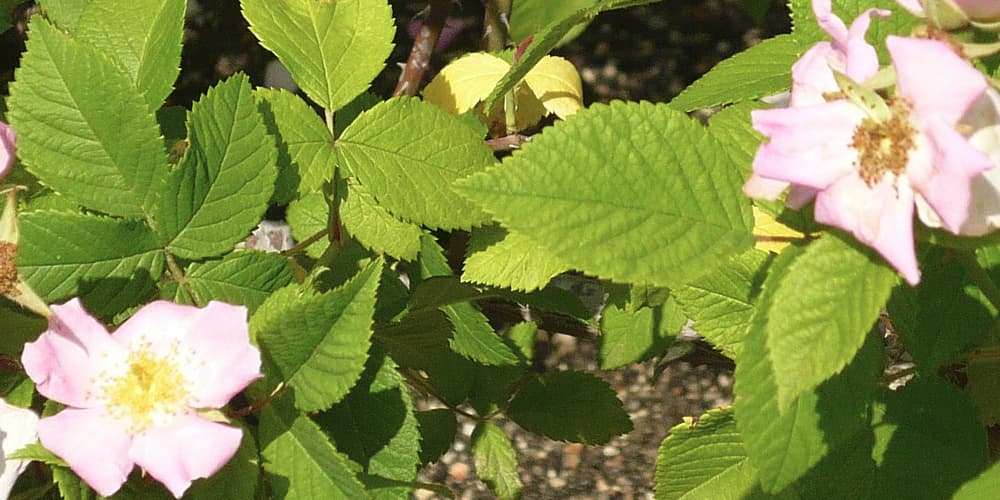 varieties and hybrids. The majority of the prairie rose varieties cultivated in our gardens are hybrids obtained from R. multiflora, and are already recognizable as such by their climbing habit and the richly umbeled inflorescence. Some of the best strains include: Anna Maria - Beauty of the Prairies - Belle de Baltimore - Caradori Allan - Eva Corinna - Jane - Linnean Hall Beauty - Mrs. Hovey - Milledgeville of the Prairies - Perpetual - Président - Pride of Washington - Queen of the Prairies - Ranunculiflora - Triumphant - Virginie Lass.

culture and propagation. Although not entirely frost hardy, the prairie rose survives in many areas without any cover or only under a light covering of brushwood. But if one can offer the prairie roses a cover of earth, then the danger of freezing to death - to which the long, unripe shoots that appear late in the year are particularly exposed - is eliminated. Where the rose in question is used as a climbing rose for covering walls - and for this it is excellently suited by bringing masses of blossoms late towards autumn and thus causing a special effect - there all must be in the course of late summer and Shoots that appear in autumn should be cut out immediately and the wood should be well-ripened; immediately in late autumn, after careful cutting out of thin shoots, the mature main shoots are shortened, and the whole wall, as far as the prairie rose climbs, is covered with fir branches, which are fastened with light slats to protect them from being carried away by the wind. If at the same time one has avoided watering the Michigan rose in autumn, which only encourages the shoots to sprout, one can be assured that a rose treated in this way will survive the harshest winter without any disadvantage. Otherwise the rose in question will not love the cut.

The prairie rose is propagated very easily by cuttings, which root surprisingly quickly, more often by offshoots and root shoots, as well as grafting on healthy high stems of R. canina to be able to quickly cover tall objects.

By the way, grafting can only be recommended for pot specimens; ungrafted cultivation remains the most suitable, and almost only the variety Perpetual Pink is suitable as a mourning rose.

A judicious improvement of this species through extensive attempts at crossing should bring forth quite lovely novelties, and thus the groups of climbing roses receive a welcome increase.