I guess I should first see if anyone can confirm this rose is The Bishop (Belle Eveque)?
The pictures are of one growing in the gardens. (They didn’t have the name)
I purchased a rooted cutting that must have been two or three years old because it was fairly large and had bloomed.
If not The Bishop, any idea what it is?
If it is The Bishop, does anyone have any experience in breeding with it? Pollen? Hips?
This one did not set hips on the few blooms it had, but perhaps needs time to grow. Or, perhaps, it will be pollen only. I will get its pollen under the microscope this June. 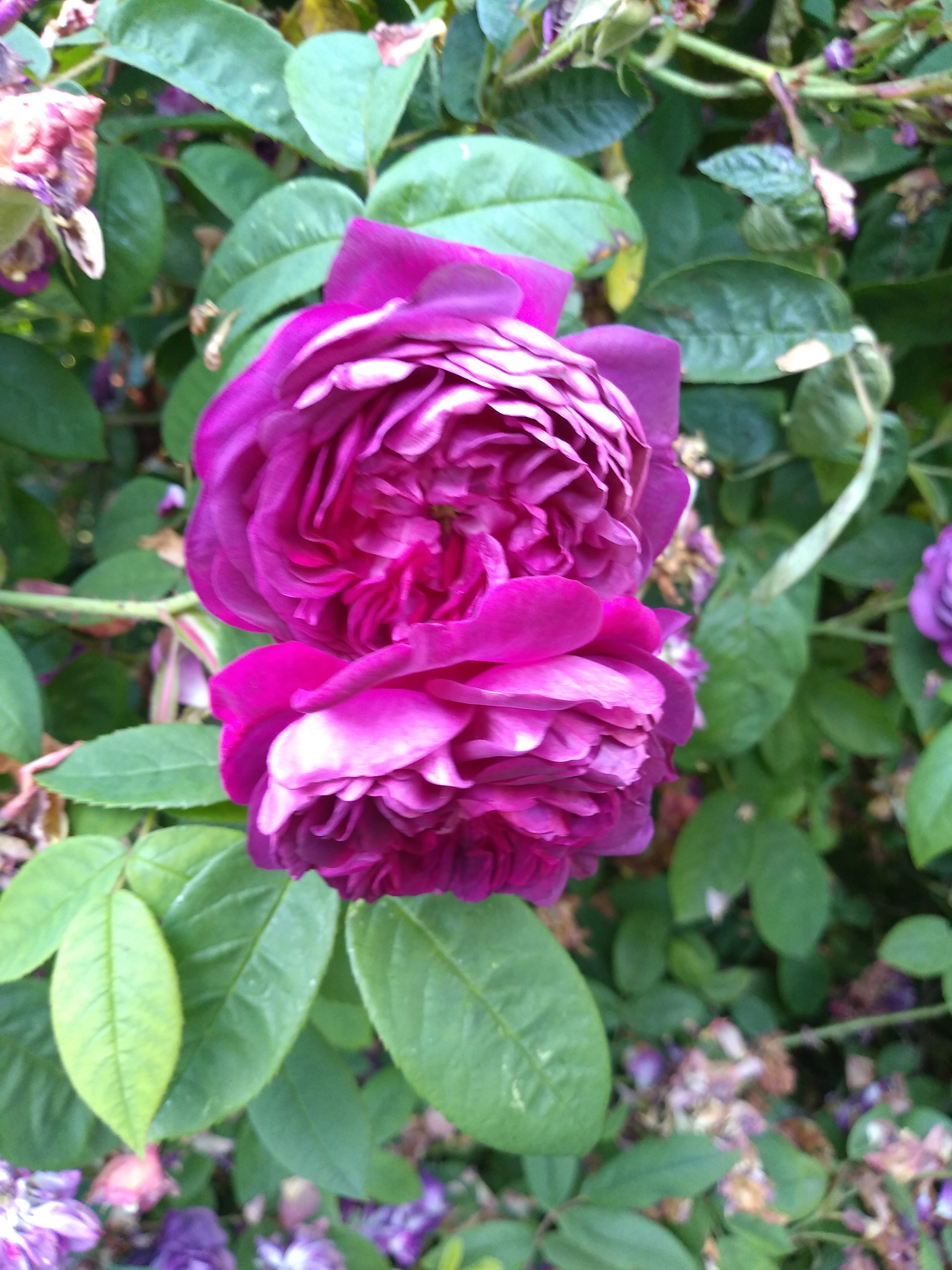 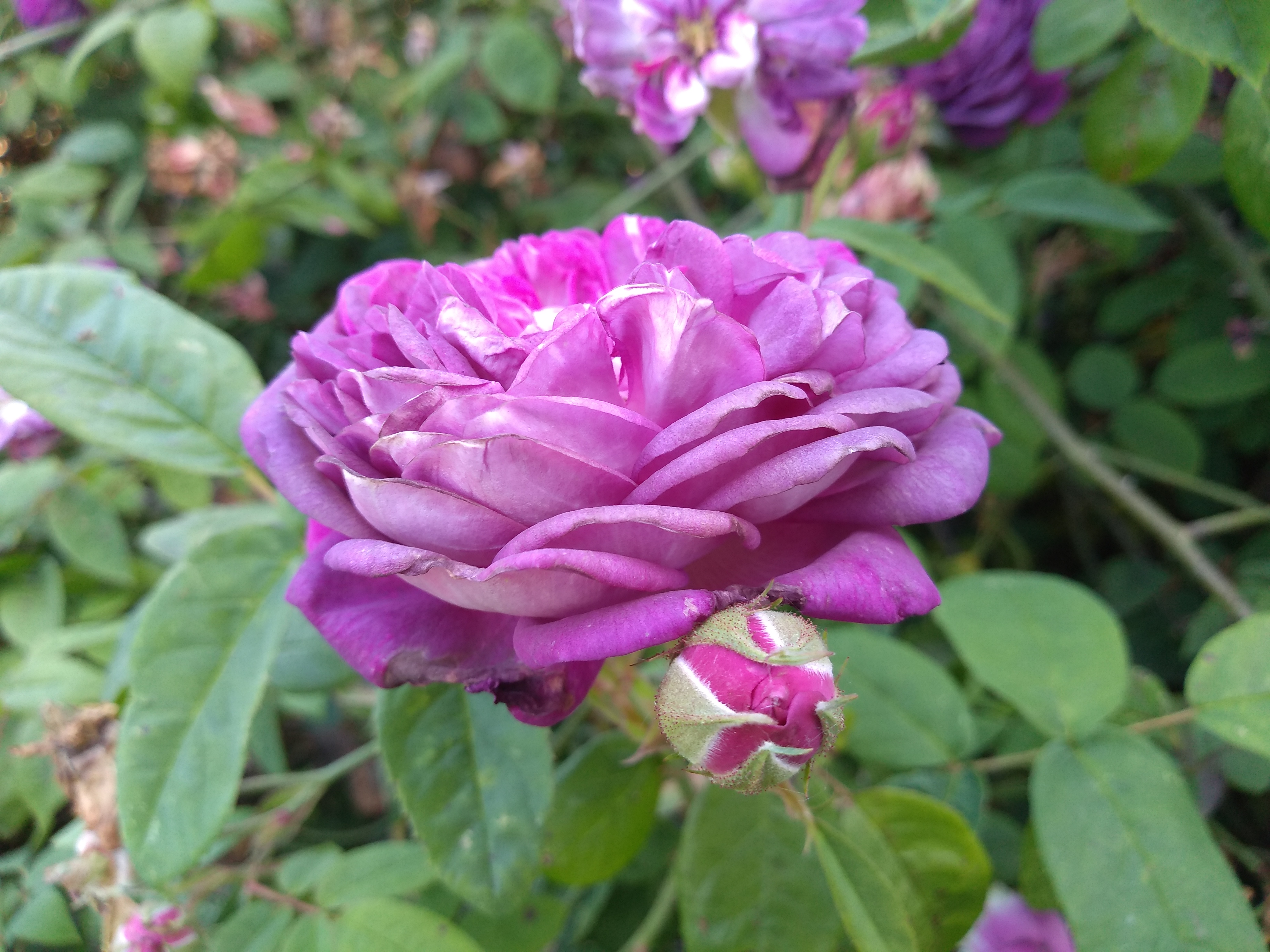 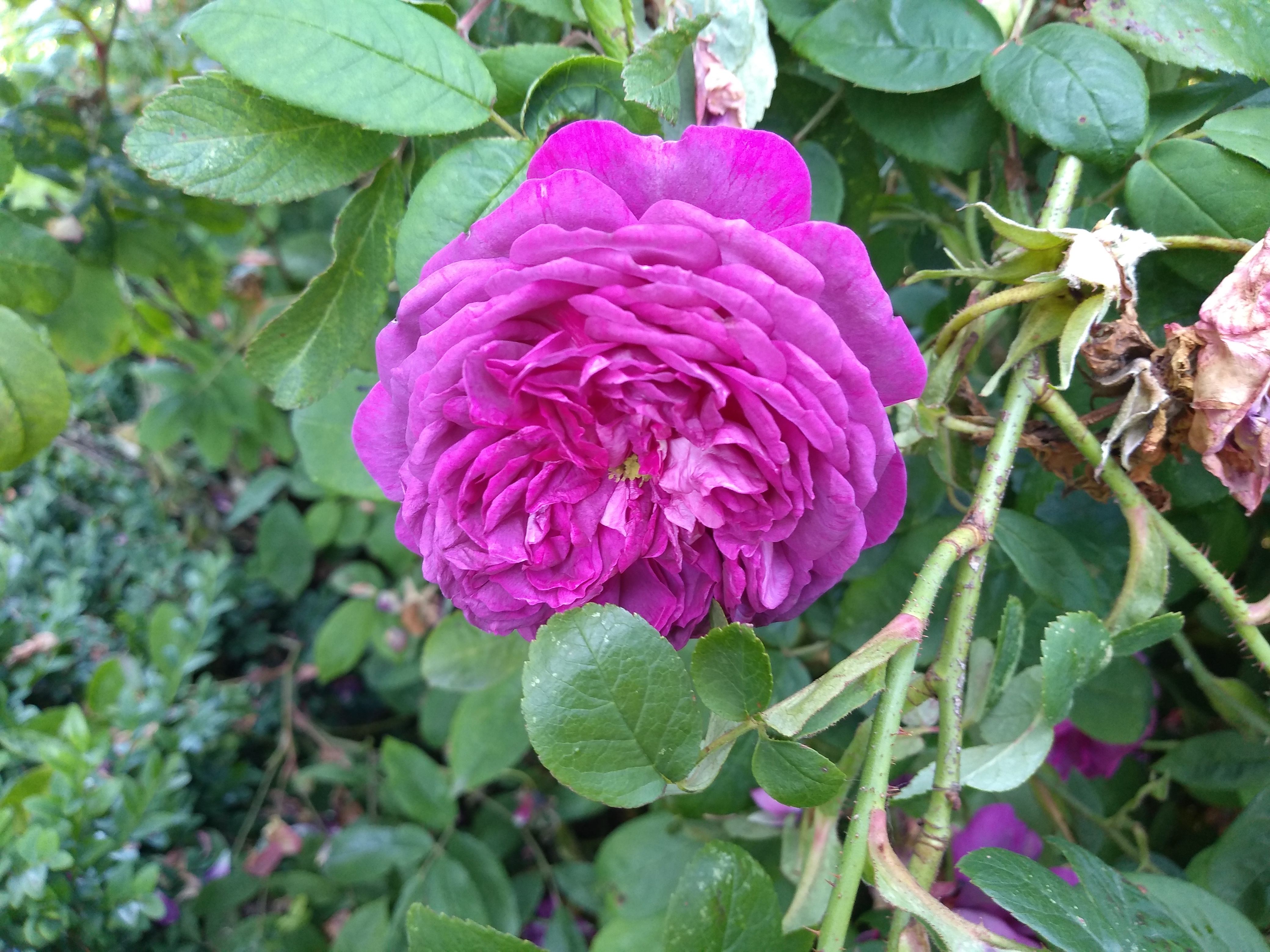 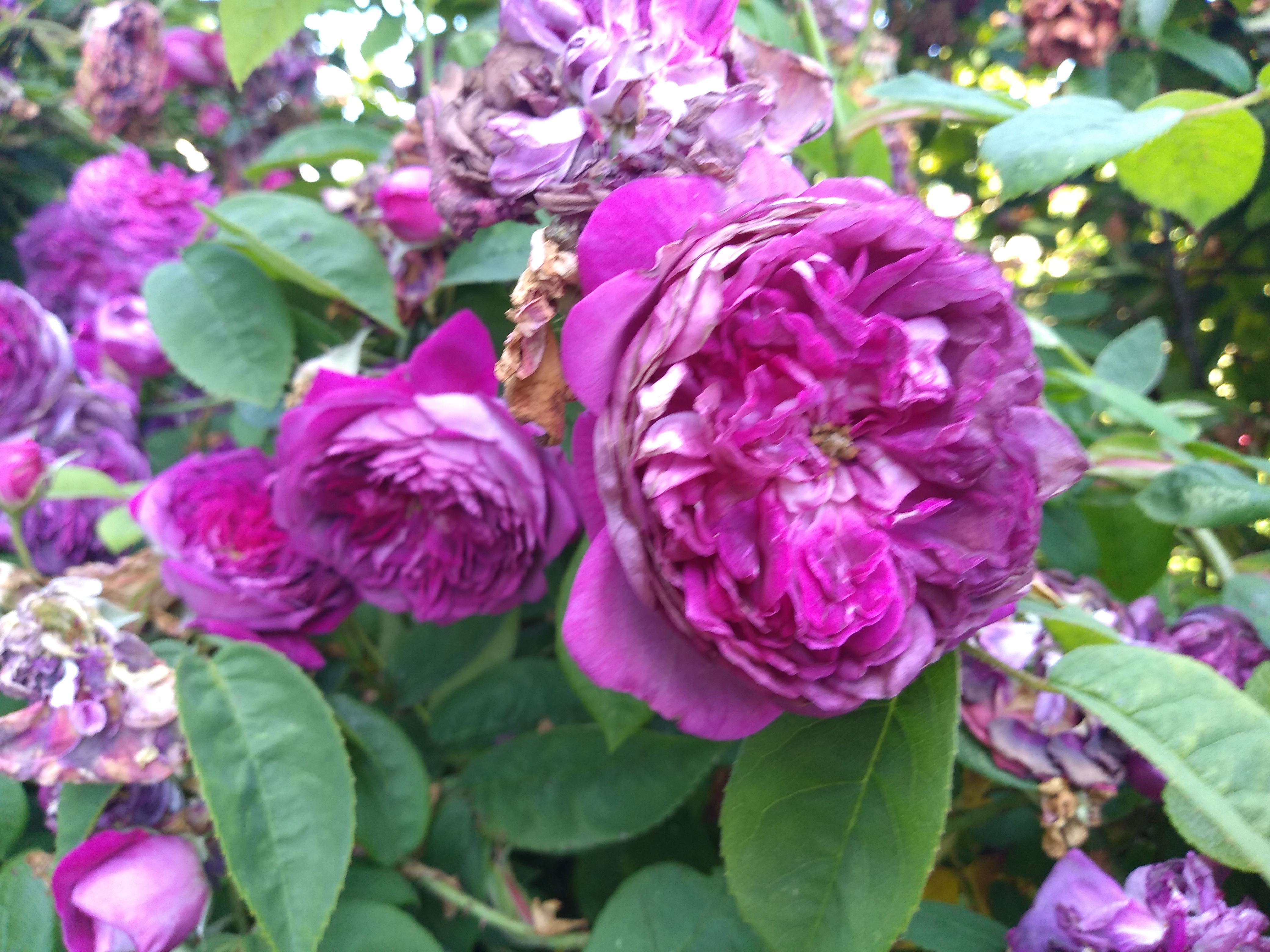 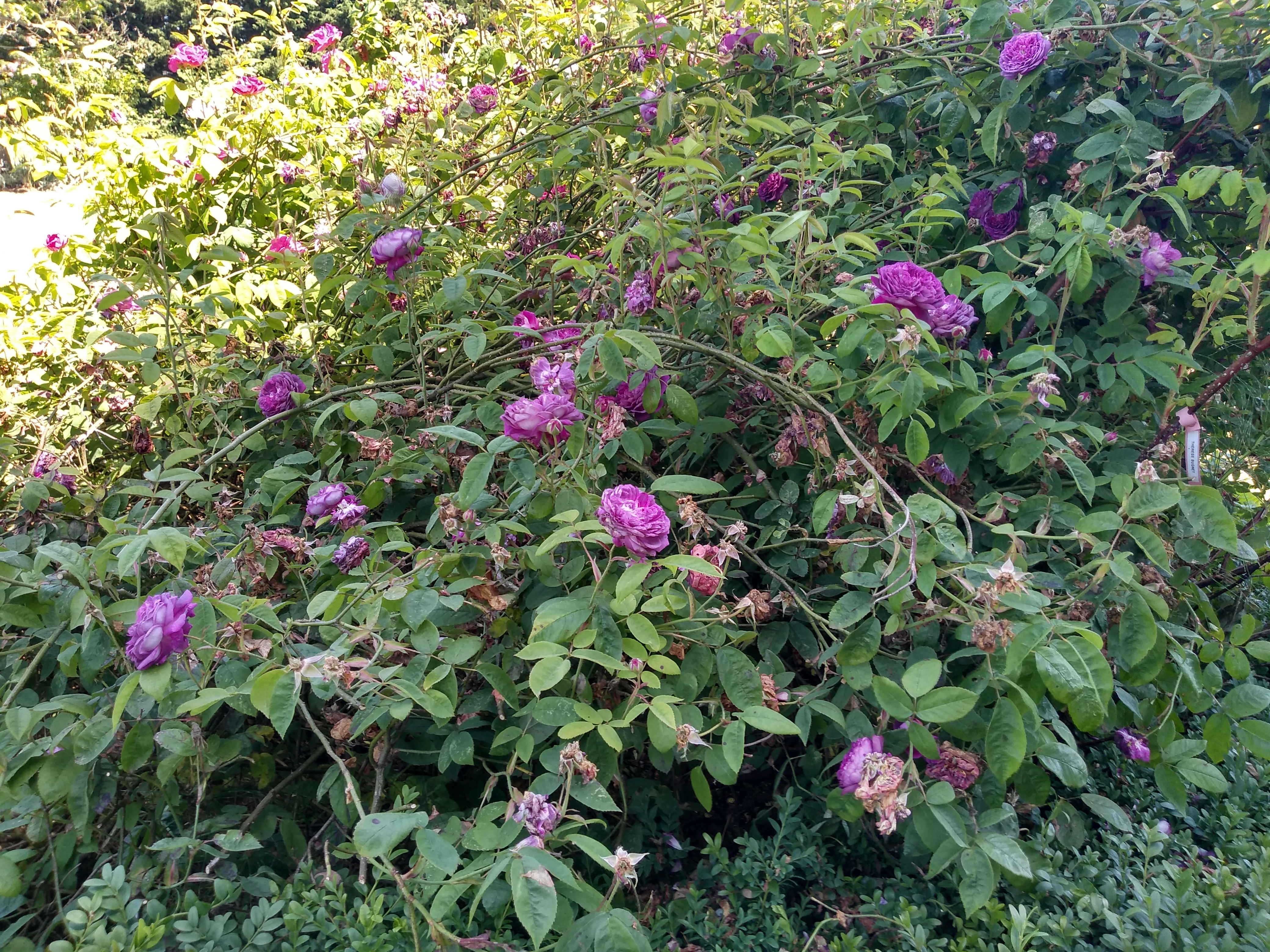 It seems plausible that this is ‘The Bishop’, but there are quite a few hybrid Chinas of vaguely similar appearance that can be frustratingly difficult to tell apart with absolute certainty, especially if they aren’t growing side-by-side under the same conditions. Many of that class are quite sterile, though often highly floriferous (it has been said that the first rose shows consisted of displays of potted hybrid Chinas in lavish full bloom). If you have trouble working with that one, it might be easier to start with a more fertile gallica instead.

That looks very much like a rose that I bought as “cardinal de richelieu” in Atlanta, which it wasn’t. Do you know if the flowers start out a lighter color and then darken to that color? Your picture and the ‘Robert le Diable’ from Fraser Valley Rose Farm videos are the closest to what I grew in Atlanta. Sorry I can’t be more help. If yours is the same as mine, it doesn’t set seed, or it didn’t for the 5 years that I had it.

I only saw the rose in bloom one time in a garden, when I took the pictures. I can’t remember much since we were in a hurry, trying to take in all the roses, so I must rely on the photos.
I’m hoping the pollen will at least prove somewhat viable, So I’ll test that route with the most agreeable seed parents I have.
I’m working with Belle de Crecy and Tuscany Superb already for gallicas, although I have considered some others as well.
I have a very vigorous seedling with beautiful foliage from Tuscany Superb pollen this season, but who knows how long I’ll wait for bloom.

I was hoping to get some centifolia influence as well, but probably not likely or easy. Perhaps doable?
Thanks for the input!
I will try to update this after the season to share whether I get any hip set from the pollen.
Duane

I loaded this shrub with pollen this season and ,surprisingly, it held onto four hips to ripen.
One hip was empty. The others only had one seed each. Out of curiosity I tested them in water and they all sunk. Certainly not going to be a great seed parent, but perhaps I’ll get a few plants to test out of it.
I’m thinking about extracting these seeds to see if it helps.
I used its pollen a lot, so I’m hoping it proves a more profitable use of effort.
Duane