I know there has been a lot of discussion of the chemistry of color and fragrance on this forum. I’m posting this as a general place to babble about our experiences, thoughts, preferences, and theories of fragrance in roses and breeding roses.

The first thing I do when I walk past a seedling that’s blooming for the first time is to reach down to pick a blossom and smell it.

The different types of rose fragrance in my book:

Fruitiness or citrus. While Morden Sunrise was distinctly a tangerine smell, other roses have more of an orange or other citrus element. It seems to be more often present in orange or yellow roses? One of my favorite smells. Maybe comes from R. foetida.

The Wild Rose Smell. Sweetness. Maybe a little musky like Firewitch Dianthus, which is another of my all-time favorite smells. It seems like the fragrances of rugosas and various species (carolina, virginiana, woodsii, and others) fall into this category. Commander Gillette gives this to its seedlings, I think.

Old-fashioned Rose Water. A powdery fragrance. Just this summer someone named it as rose water, which I wasn’t really familiar with but it makes sense. Stanwell Perpetual. My R. carolina x R. centifolia has this fragrance. Not everybody likes it.

Tea. I love drinking tea. It was cool to discover that the fragrance of some hybrid teas actually smells like tea. It must be balanced with sweetness and fruitiness for best effect. Remove the sweetness and you get the bland chemical smell of florist roses.

Musk rose fragrance. Now to me, “musky” is Firewitch Dianthus or the Brut deodorant I wore as an adolescent. The fragrance of musk roses, to me, smells more like lipstick, at it’s worst. I don’t really know if I know what musk roses are…I’m just talking multiflora/polyantha types. I had Perfume Breeze in a pot this summer and really enjoyed its fragrance and could imagine the scent carrying on the wind.

Blue for You…spicy cinnamon notes perhaps unique to Blue for You. Thanks to Kim for pointing this out.

How do you think about fragrance?

Carolyn Supinger of Sequoia Nursery entered many county fairs for many years. She made heavily spiced Honey Crisp apples and won each time. Blue for You smells JUST LIKE her spiced Honey Crisp apples. I smell that flower and her spiced Honey Crisps are in my mouth. The stench so many refer to as “musk”, is actually the stench of multiflora. It’s a skunky, bitterness I detect in the back of my throat. It may coexist with varying levels of sweetness, but the multiflora I definitely sense in my throat. Real “musk” from roses, that from moschata, is a sweet, “soapy” smell which is nice up close but carries tremendously better than any other scent I detect from roses. It is cumulative, increasing greatly as the quantity of flowers increases and it IS the best for “wafting on the breeze”. It, too, can coexist with other scents, particularly the “spicy” type, of which, cinnamon is one of the stronger, more common elements I detect. Which is unfortunate as I don’t care for eating cinnamon and the smell isn’t one of my favorites.
“Tea” is something I enjoy drinking, but smelling? Nope. All the other things they mix with it, mask the “tea” scents. In roses, they smell bitter and “chemical”. Open Orthene and catch a whiff. That’s it.

The “rose” scent is there as well as “Damask”. “Wild Rose” is a soapiness, too, but with “rose”. Fortunately, there are many “fruity” types. I like those!

My gardens requires a like of odes to linseed and clove oils fragrance … combined with occasional fresh overtones of stunning citrus, until Gertrude blooms then back to what l name as Victorian gardening era heavy heady fragrance … stuck in the 1900’s for my preference.

I love both Old Rose (Damask), as in Gertrudy Jeckyl, and tea rose which is in many of the roses I have grown.
My favorite is a fruity fragrance mixed with either.
Bourbon roses come to mind, as well as a seedling I lost a few years ago.

A spice mixed with either is pleasant. This could be anything from cinnamon, cloves, myrrh.
Some that come to mind are Lady of Shallot and The Generous Gardener.
And what about Hansa? Any thoughts as to how you would describe the fragrance? It has been one of the more unique fragrances I have grown and I found it rather pleasing.

Also, I grew Bolero last year and remember loving the fragrance as much as its beauty, but can’t remember what it’s fragrance was.
Any description you would give it?
Thanks!
Duane

Fragrance is largely subjective, and opinions cannot often be communicated effectively. I once read a list of perfumes that made no sense to me. How could a rose smell like red ink? Face powder might be applied to ‘Sterling Silver’, if you can remember your grandmothers face powder.

I read somewhere that ‘Zéphyrine Drouhin’ smells like raspberries. Maybe the smeller knew a different sort of raspberry than I have tasted. I also read that the scent of Rosa multiflora is like holding a hot skillet close to your face, whatever that was supposed to mean.

I have never smelled tangerine or orange in a rose, though I did get a nose full of grapefruit from ‘Harriny’. Both ‘Colonial White’ (RICA Sombreuil) and ‘Intrigue’ (Warriner not Kordes) often smell partly of lemon, though in different ways. The former combines sweet apple and oily lemon to produce a mouthwatering scent of lemon drops. The latter sometimes has lemony notes in its “Old Rose” perfume.

If you want to broaden your knowledge and appreciation of perfumes, I can recommend The Fragrant Year (1967) by Helen Van Pelt Wilson and Léonie Bell Here’s their discussion of pot pourri.
http://bulbnrose.x10.mx/Roses/breeding/WilsonPotPourri1967.html

And if you care to learn more about the chemistry of rose perfumes, try this one.

The so-called “myrrh scented” roses are a confusing lot. ‘Fair Bianca’ smells (to me) like the anise “root” of grocers. ‘Distant Drums’ makes me think of honey, while ‘Wife of Bath’ is so strange and intriguing that I have had a difficult time tearing myself away. It is not sweet or floral or herbal or fruity or … I could never decide what to call it. ‘Constance Spry’ has a very pleasant scent, but it didn’t stick in my memory like the others I have mentioned.

As for the Tea scent, I have read many uninformed opinions and speculations. The scent and flavor of teas apparently exhibit varietal differences, and are as affected by soil, climate, altitude, culture and weather as grapes and roses. The first time I smelled ‘Aptos’, it was new mown hay. But sniffs on later visits revealed nothing but noisette.

No. 8. > Rosa odorata> , or Tea-rose, celebrated in this country for its fragrance being similar to > fine Hyson tea> . It justly deserves preference of all China roses, for the delicacy of its flavour. The flowers are a cream coloured blush, the petals round and full, forming a very large rose; when full blown, it is pendulous. It will withstand the winter of the middle states with a little protection, such as straw, box, or barrel; requires very rich light soil.

Hyson tea is mentioned in the first stanza of “Xenophanes” by Ralph Waldo Emerson, 1847:

By fate, not option, frugal Nature gave
One scent to hyson and to wall-flower,
One sound to pine-groves and to waterfalls,
One aspect to the desert and the lake.

We may count ourselves fortunate that the scent of this rose was compared to tea rather than to the wall-flower. Who would want to raise Hybrid Wallflower roses?

Hybrid Wall Flowers would make more sense than Hybrid Teas, though, and Erysimums are pretty great garden plants and DO smell wonderfully!

Perhaps, but the alternative meaning … the one left alone at the dance … is not so reassuring.

Rose perfume is far more complex than we might think. Years ago I read that there were three components that were mostly responsible for the “attar of rose” perfume. Turns out those are really minor components when measured by “head space” (contribution to perceived fragrance) rather than by volume.

To give just a small idea of the complicated interactions of scents that go into one particularly delicious rose, I have a couple of recipes for ‘Maréchal Niel’ rose.

And related to this, Parks’ Yellow China Rose was very fragrant, but not tea-scented. It became confused with the Yellow Tea-scented rose back in the 1830s, and took a long time to get sorted out. Nevertheless, the rose was VERY fragrant and VERY double, two traits that were passed down to ‘Maréchal Niel’.

Both were glorious form roses to grow in a tough place when they bloomed - though doubted my Park’s was as advertised - bland tan yellow and little fragrance.

Maréchal Niel back in the day before the Linseed Oil and Oil of Clove strategic moves for fragrance … or aka common sense. 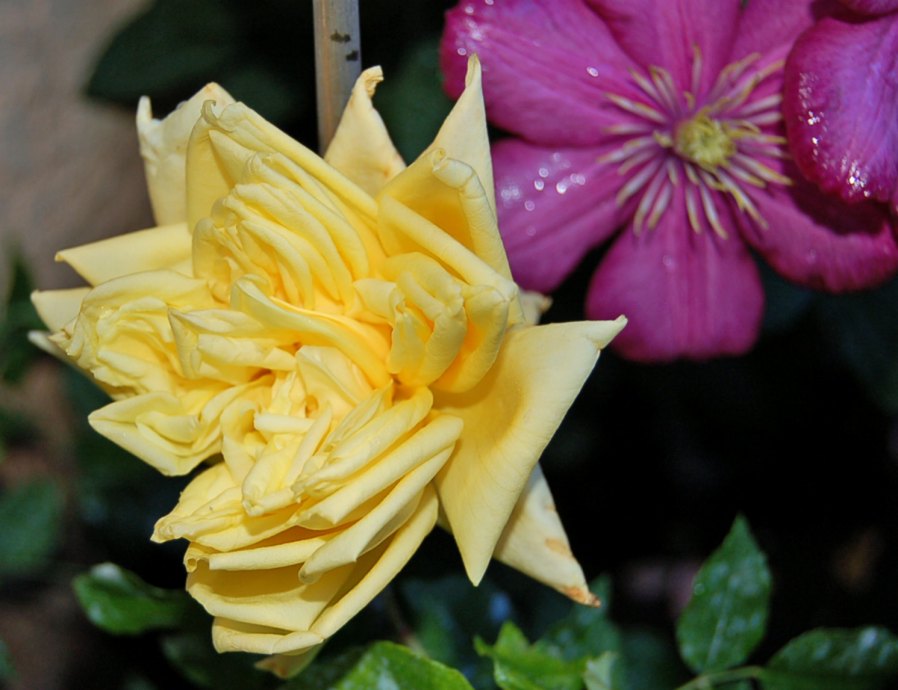