This summer we had our annual family get-together at a location on the south-facing slopes of the Peace River valley in northern Alberta, Canada…about 300 miles north of the city of Edmonton…USDA Zone 2. This undisturbed area is home to r. acicularis and r. woodsii and their variants…but on a walk through the grassed ridges and coulees, I came across a colony of this:

What grabbed my attention first was the hulthemia blotch pattern on the petals (bottom photo). And a few meters away I discovered a different floral pattern:

The vegatative characteristics were different from r. acicularis or r. woodsii and, to my eye, fitted the taxonomy characteristics of r. arkansas…just was a bit surprised that it was this far north.

In the wild here r. arkansas appears to bloom on new growth and grows in the most exposed slopes…both acceptable traits.

I harvested some pollen and applied it to Eyes for You…long shot…thinking I could enhance the species blotch in the second photo below…and have a hip or two from that cross.

Has anyone used r. arkansas in their breeding program? Any thoughts as to what I might expect or recommendations of other seed parents to use? 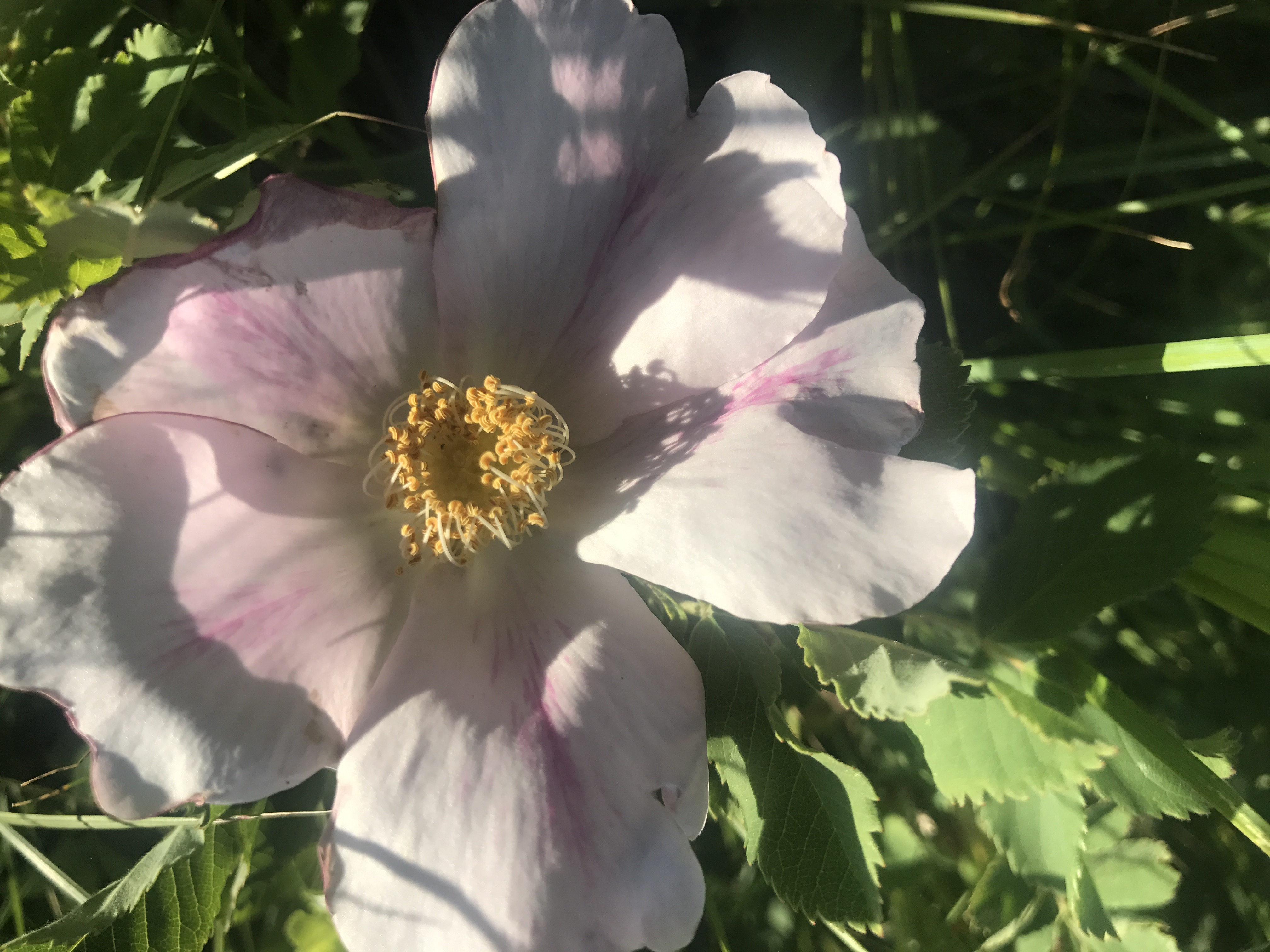 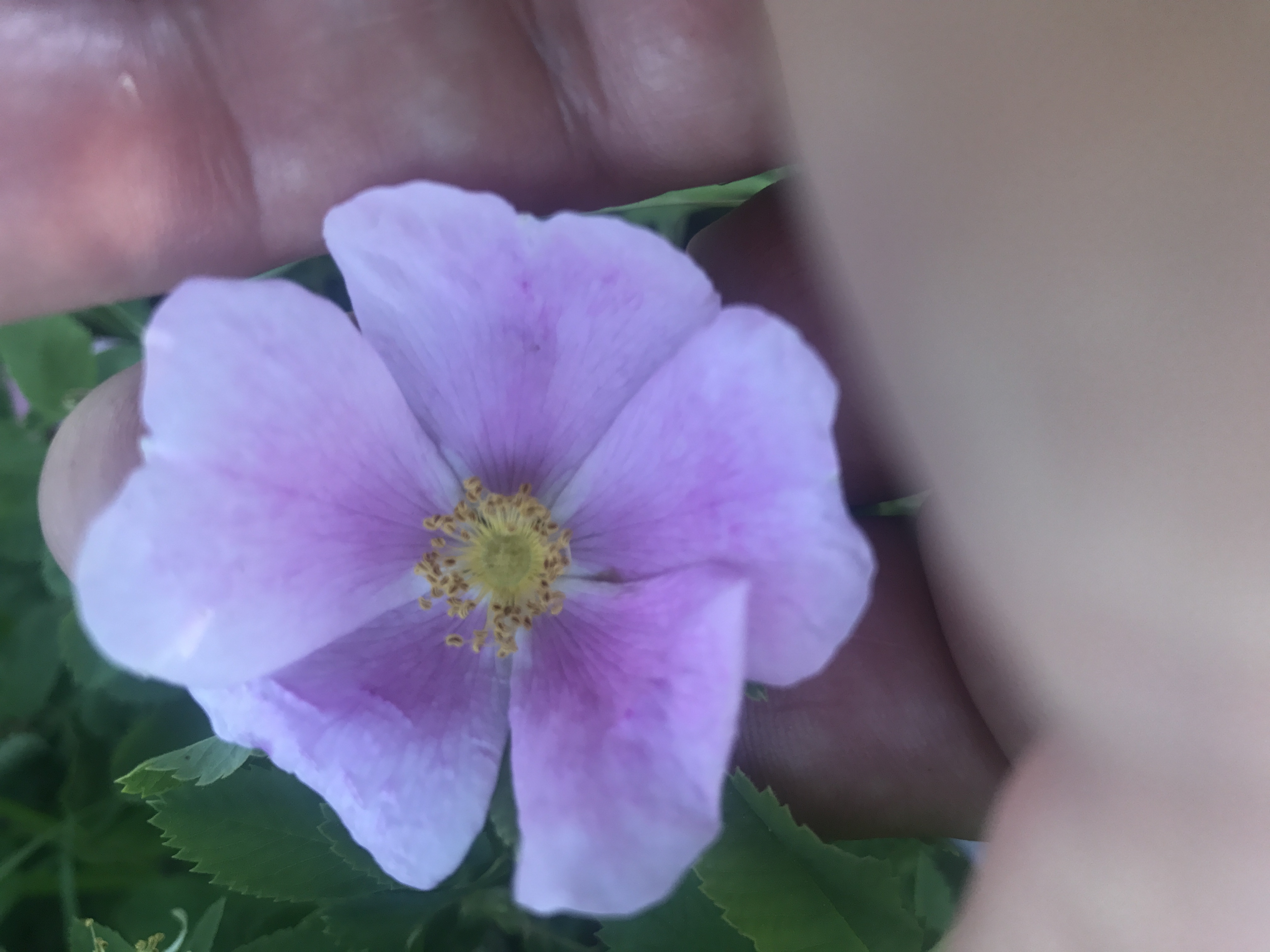 Note the photos of ‘Morden Ruby’ on HMF Roses. They have a mottled appearance because of the sporting of the original flower red colour. This mottling characteristic may be the result of Rosa arkansana in the pedigree of this rose cultivar. However, I don’t think it’s been established the markings/mottling characteristic of some Rosa arkansana population flowers commonly show up in hybrids of this species. For sure, a good breeding project to work on!

It’s always mystified me why Henry Marshall of the Morden Research Station apparently never developed a breeding program using yellow Floribundas and HT’s with Rosa arkansana. It’s possible he began one, but maybe there were too many disease problems to continue it. Regardless, I think it should be attempted. I would begin by crossing ‘Sunsprite’, ‘Morden Sunrise’ or ‘Bill Reid’ with Rosa arkansana.

My focus on using Rosa arkansana (and ‘Assiniboine’) is crossing it with Rosa gallica to develop very tough, drought resistant roses. Keep in mind Rosa arkansana could be valuable in a breeding program because of its deep roots and that is why it is drought resistant. However, I don’t expect these hybrids to be too disease resistant, but maybe they would do okay growing in a Prairie Climate.

We have to keep in mind the caveats presented in a recent thread about working with species. Your R. arkansana might be very different than mine.

I got my R. arkansana from Lawyer Nursery at the same time that I got my R. carolina, R. virginiana, R. acicularis, and R. woodsii from them. Five of each species went into the row. The R. arkansana were the first and only ones so far to get grubbed out…they were sprawly, slow to develop, and maybe had some diseases. Crosses using them as a seed parent all failed.

One of them, however, did have an interesting thin, darker line down the center of each petal. I’ll see if I can find a pic…probably posted it already her a couple years ago. I might have a seedling of Art Nouveau X that striped R. arkansana growing that has not bloomed yet. (My code name for that seedling was ARK1, which was the same code David Z uses for an OP Arkansana likely hybrid of his…I’ve used both so I’m not 100% sure the ARK1 in this cross was from my R. arkansana but I think so because I know I really wanted to make that cross of a striped species )

Found it. Gosh, that was pretty! I didn’t grub this plant out, but it got eaten by a nearby R. carolina and probably no longer exists. 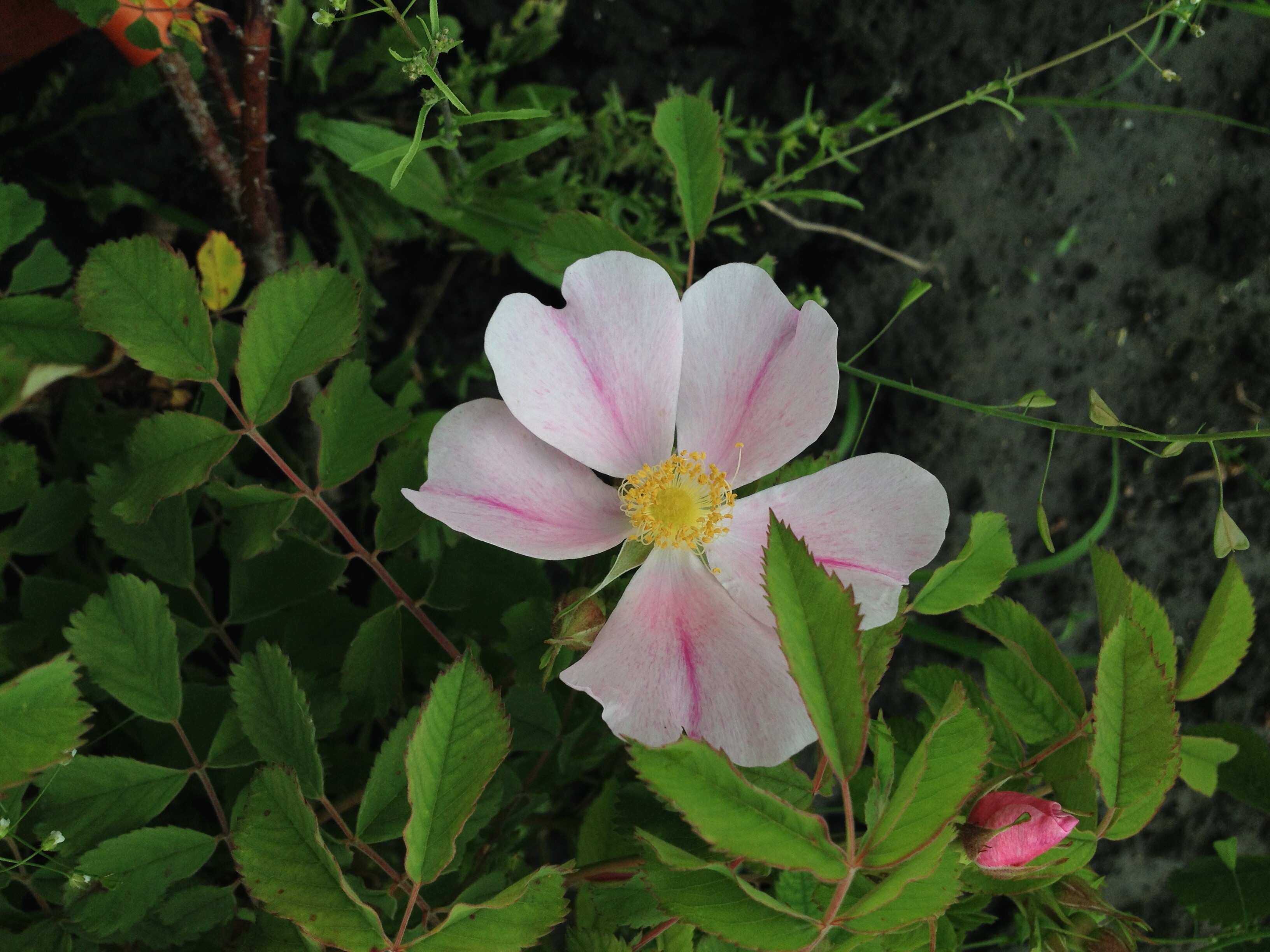 Sorry, kind of a side note regarding Paul Olsen’s mention of R. gallica.

The only Gallicas I’ve used are the Apothecary’s Rose and Tuscany Superb. I get the feeling that they can give excellent vigor and some disease resistance in crosses. In some ways the seedlings outperform the parents. That is the case with my Tuscany Superb x Persian Yellow-or-more-likely-Morden-6910 seedling. My Tuscany Superb is just clinging to life - winter dieback and ugly foliar problems, but the seedling is much much better.

I made crosses with the Apothecary’s Rose back before I understood about ploidy and the dominance of non-reblooming genes. I no longer have the Apothecary’s rose but if I did I would use it because the seedlings inherited excellent crown vigor and like the Tuscany Superb x M6910 seedling they seemed to get bigger than either parent. Some were healthy and some were not, but the modern parents included Morden Blush so what can you expect. If I still had it I’d cross Apothecary’s Rose with some of my tetraploid species mashups that include R. carolina. For instance, I have a bunch of (R. carolina x R. centifolia) x (R. acicularis x [r. calocarpa x R. nutkana]) seedlings started…it would be so much fun, if any turn out to be handsome & robust, to cross them with Apothecary’s rose. I’m addicted to this path of creating a species mashup although it doesn’t seem likely to lead to the creation of a marketable rose within the next few decades.

I also have obtained 4 germinations from 2013 cross from R. arkansana x Prairie Peace, after two years of stratification. But I have been able to save only one which has his first flower in 2016. They are very hardy in my Canadian zone 3, diseases free and both are non-remontant.

As you can see on the photos below, R. arkansana x Applejack, has inherited the greyish green foliage of his both parents (with a little bit of apple scent). But in the cross of R. arkansana x Prairie Peace, the influence of spinosissima foliage is evident. And I like the reddish stipules and petioles colour, which give a nice contrast with the pink flower and his pale yellow centre. I intend to add more yellow on this cross next year, probably with Hazeldean, J5 or, with my own 2016 seedlings: two plants of Roseraie de l’Haÿ x J5 and nine plants of King J x J5, if I can have some flowers from them. It is permitted to dream…!

This summer I have used Gay Centennial pollen on my R. arkansana x Applejack. Seven flowers have been pollinated and I have sowed 22 seeds from 7 fruits harvested. I am waiting for some possible germination next spring. I hope these results will be useful. 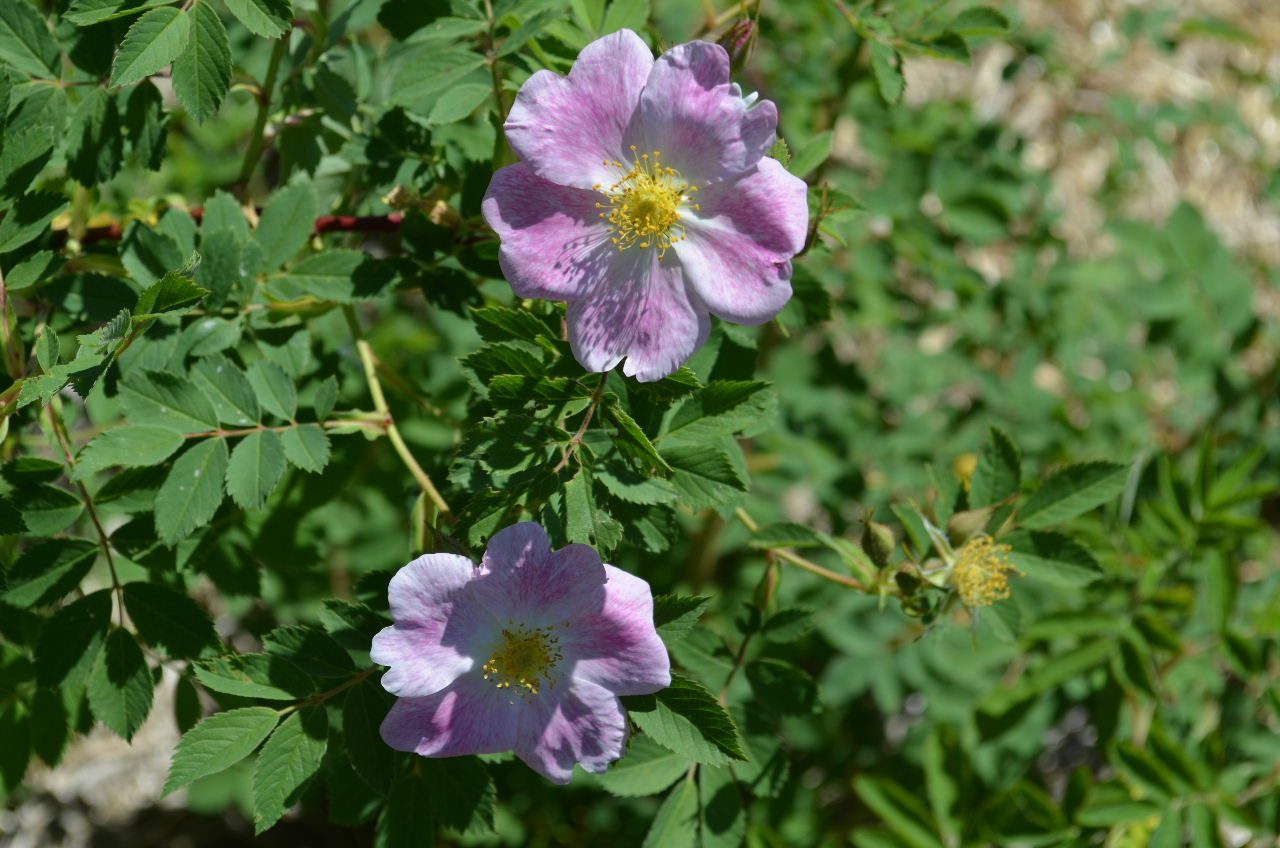 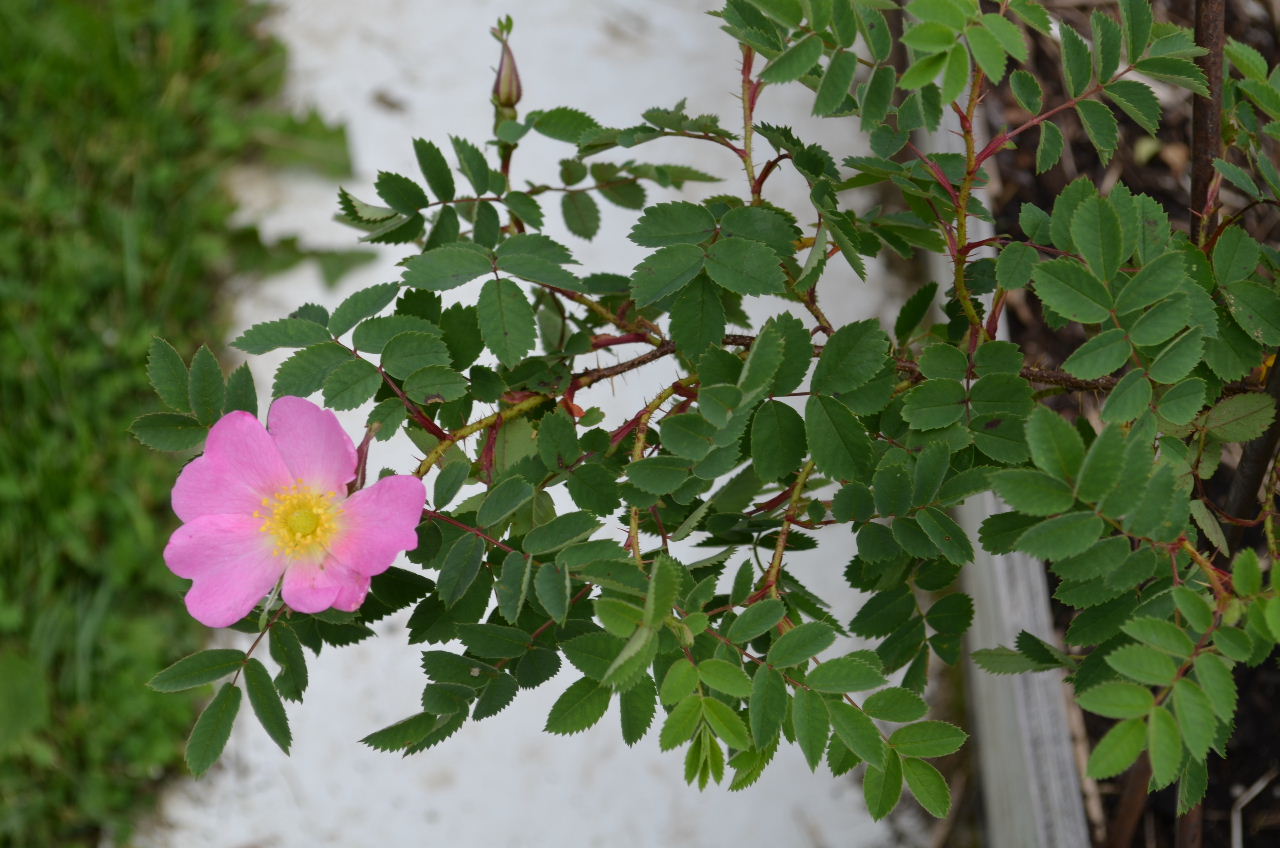 Paul…I like your strategy of using Rosa gallica for drought resistance. I suspect this is also a route to get a more complex flower form which gives me the idea that perhaps the once-blooming James Mason could work…and I think you are quite familiar with James Mason.

Joe…" I’m addicted to this path of creating a species mashup although it doesn’t seem likely to lead to the creation of a marketable rose within the next few decades.“…well said and I know the feeling of addiction! I can appreciate that time consuming work you’ve done with r. arkansas and your statement " ploidy and the dominance of non-reblooming genes” continues to hinder my efforts too. Perhaps one should just content themselves with new, healthy, once bloomers in our growing zones…albeit that work itself is like eating porridge three meals a day.

Andre…Excellent work…I must say I like the seedlings in photos and know these would be tip hardy in my area. Does the 13M-1Rosa arkansana x Prairie Peace seedling have any of the roguish traits from Prairie Peace?

Gosh, that was pretty!

it got eaten by a nearby R. carolina and probably no longer exists

I once grubbed out one of two roxburghii F1’s figuring the other was the better of the pair to work with. That was 2011-12. I finally gave up on the one I kept last year on account of it being sterile and having lost too much blood to it. In the middle of this past summer I was amazed to discover the one I thought I had killed had resurrected itself and I’ve been nurturing it in the hope of trying it next year.

Any thoughts as to what I might expect or recommendations of other seed parents to use?

PM my your address and I will send you some pollen of this one.
mug.jpg
mug.jpg 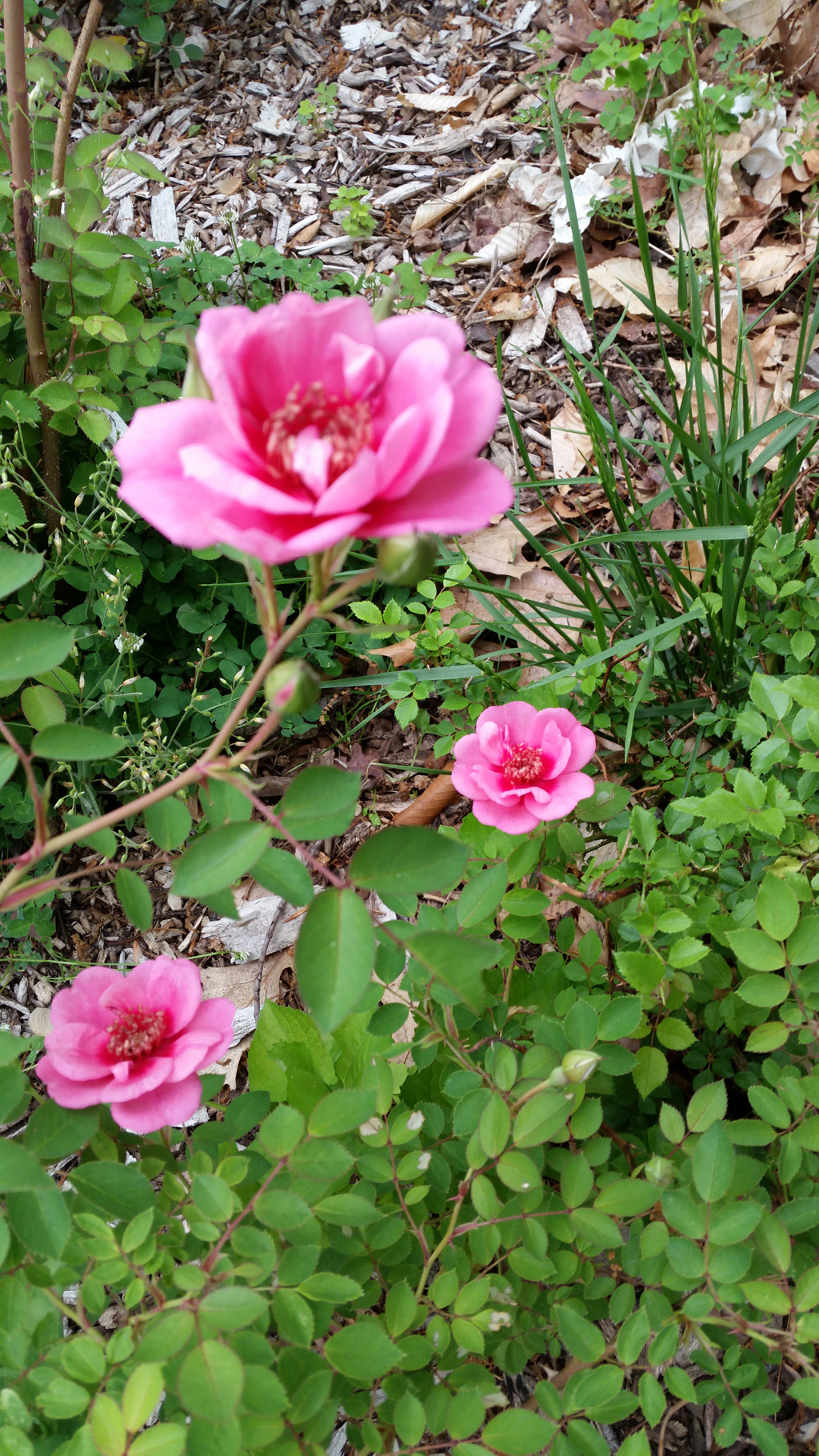 I have no experience with this species, but here are articles by breeders who have used it.

Impressive Don…I’m thinking this is a r. arkansa hybrid. Now I’m wondering if it is F1 or F2. In any case, it’s likely modern genetics X species…nice accomplishment.

Species hybrids with that hulthemia blotch could be very attractive. Can you imagine what R. spinosissima var. altaica would look hultheminized? Photo taken at Beaverlodge Agricultural Research Station (Zone 2)…northern Alberta…specimen has survived 60 to 70 years unprotected. R. arkansas is a survivor here just as R. spinosissima var. altaica…interesting that they evolved on separate continents and have very different growth habits…but both work.

Karl…those articles are most exquisite in describing the tedious nature of breeding with species…and for anyone breeding in that theme a must read. I often wonder what prairie breeders like Percy Wright and Henry Marshall would have been capable of breeding if they had today’s rose genetics at their disposal. And any climate change in their part of the world would likely be positive…-67 F (-55C) during the 1942-1943 winter would be tough on seedlings…and yet they succeeded…especially Percy Wright in his era. Roses grow so slowly in that climate and it takes years…perhaps decades…to make that kind of progress…not for the faint of heart. Robert Erskine describes a winter when a plague of rabbits destroyed his seedling crop…another serious setback as a northern prairie rose breeder. Those breeders were as tough as the roses they developed…great articles…thank you Karl. 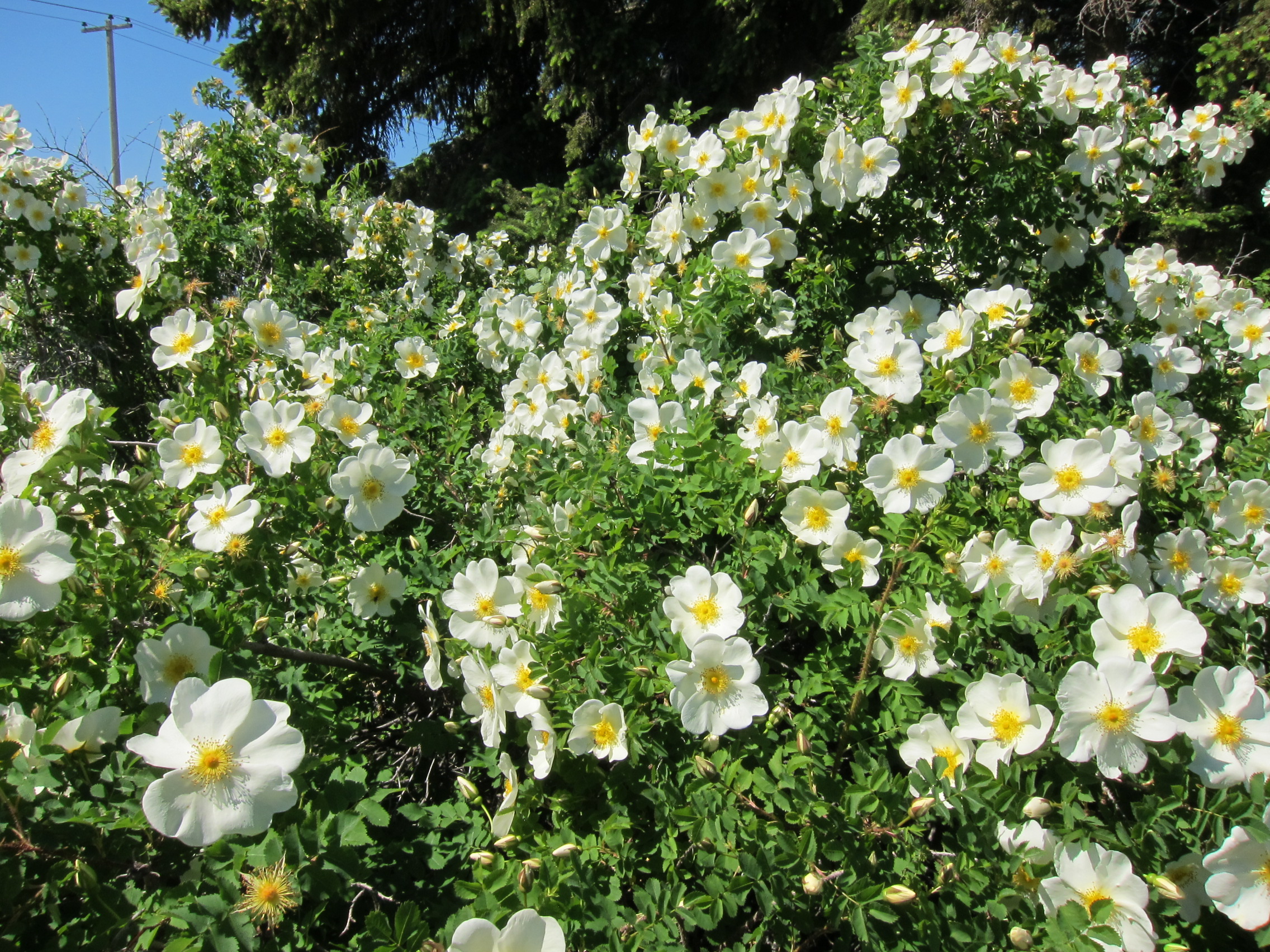 Doug,
I have not observed any special roguish traits of my 13M-1 for now, but maybe some particular traits will appear later on.
Karl,
These references are very interesting and inspiring, thank you!