A few seedling pics below:

Ann Endt x Hazeldean - growing vigorously. Yoo-hoo! Has not bloomed. What will the flowers look like???

R. foliolosa x Will Alderman. I got my foliolosa from High Country Roses, I think. Light pink, and for some reason could give reblooming seedlings. This is one. Pretty healthy so far but of course the blossoms don’t last long.

R. carolina x R. centifolia. Strong fragrance and very hardy. In the wrong conditions the blossoms get a little funky in the middle, as is happening in this pic.

Large Flowered Virginiana seedling. Could also be R. carolina. I can’t really remember the origins of this one except I called it “large flowered virginiana.” Incredibly awkward, leggy habit, but the blossoms are larger than that of the species. Perhaps could be used to create hardy climbers.

Art Nouveau x 11Z1. I’ve never seen a blossom pattern like this. Of course the seedling is also very weak and diseased. 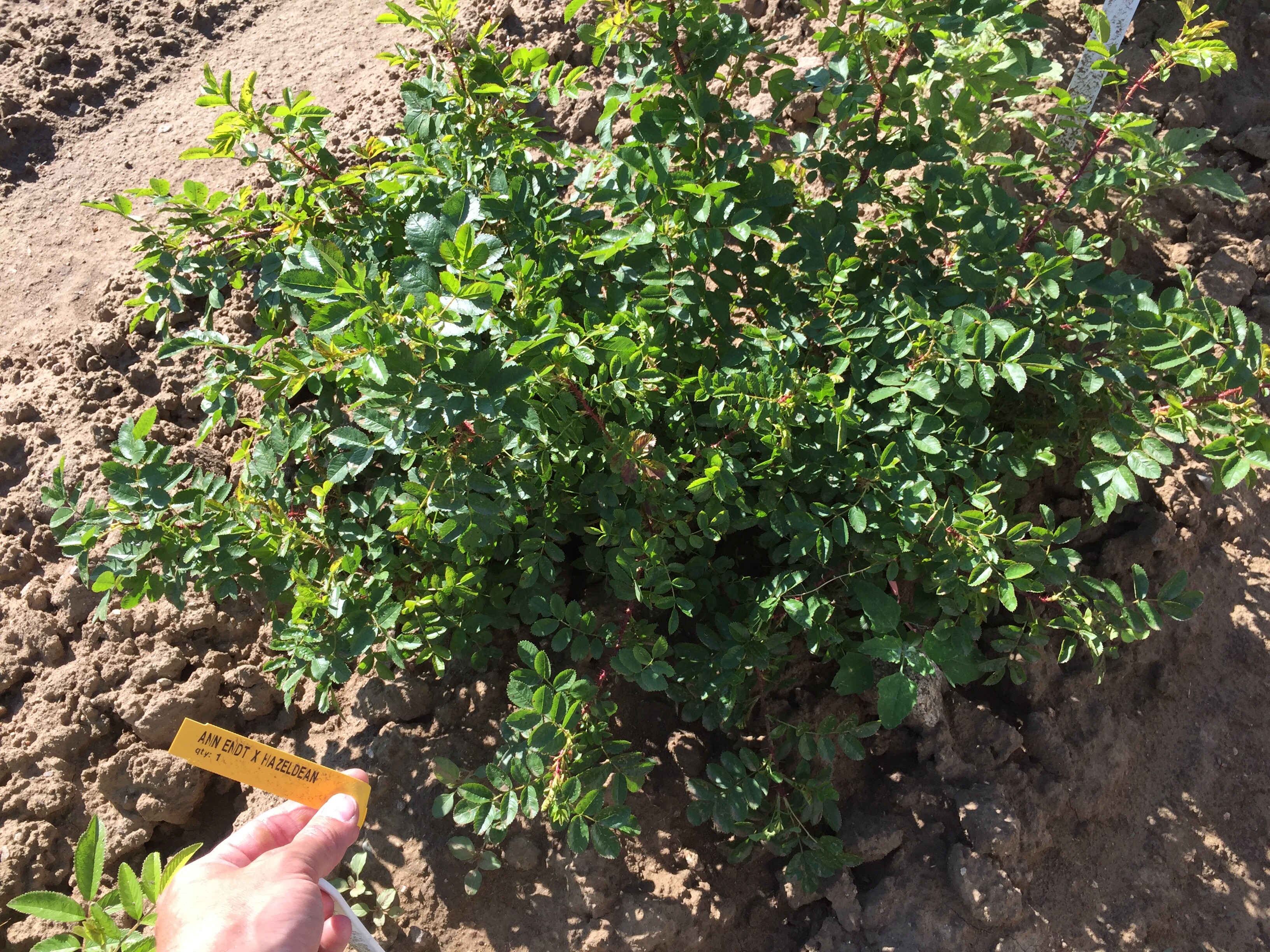 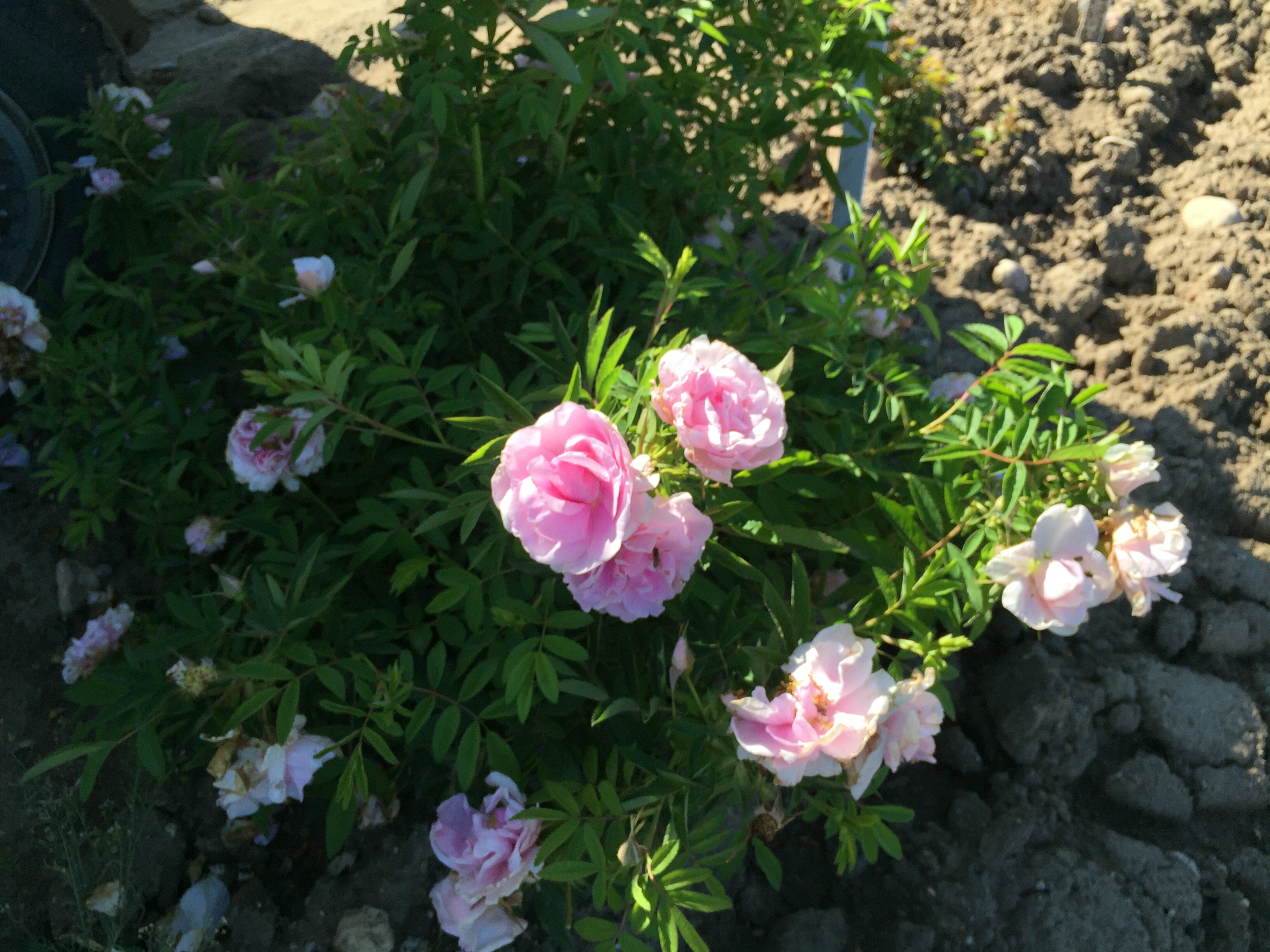 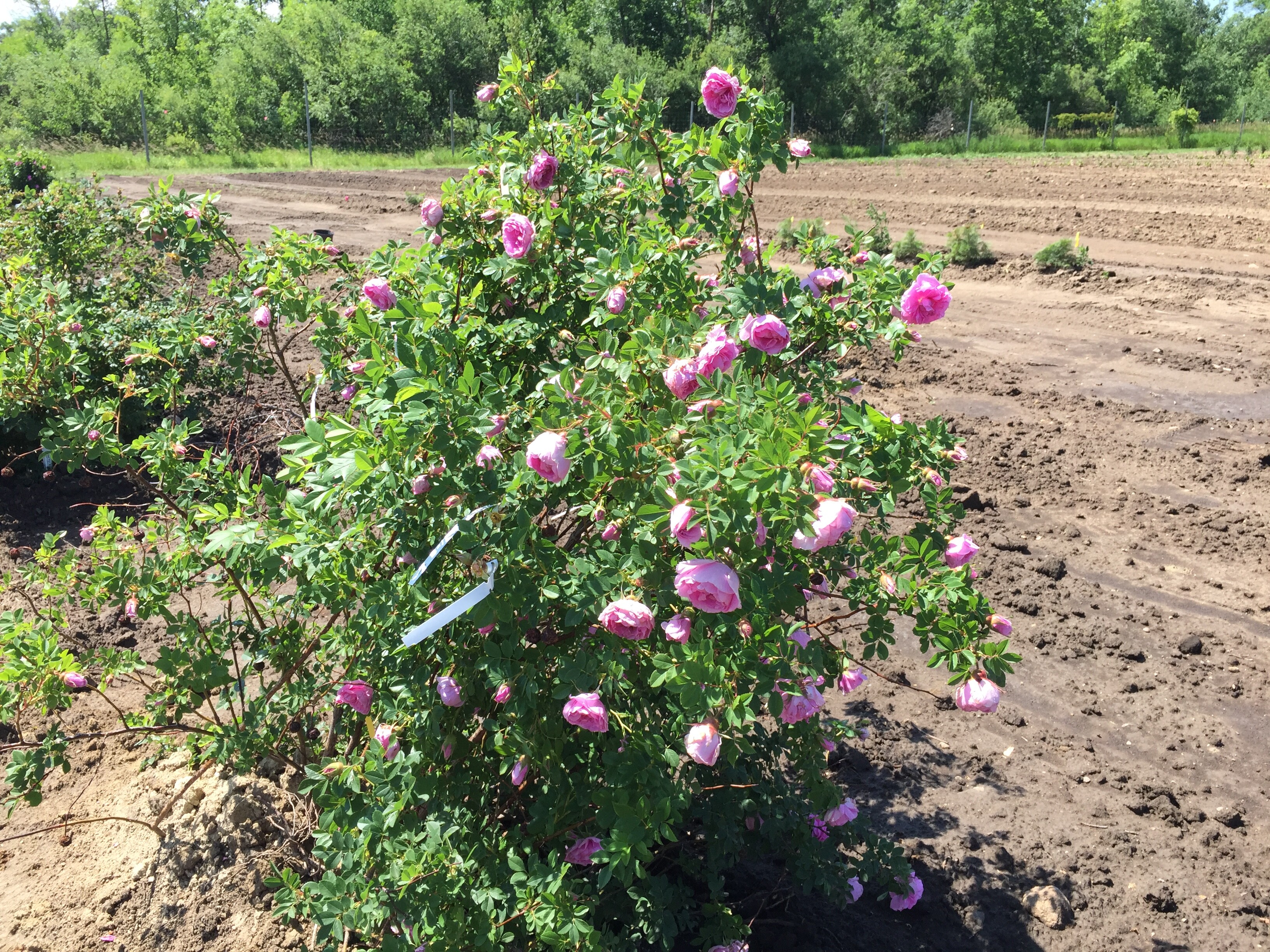 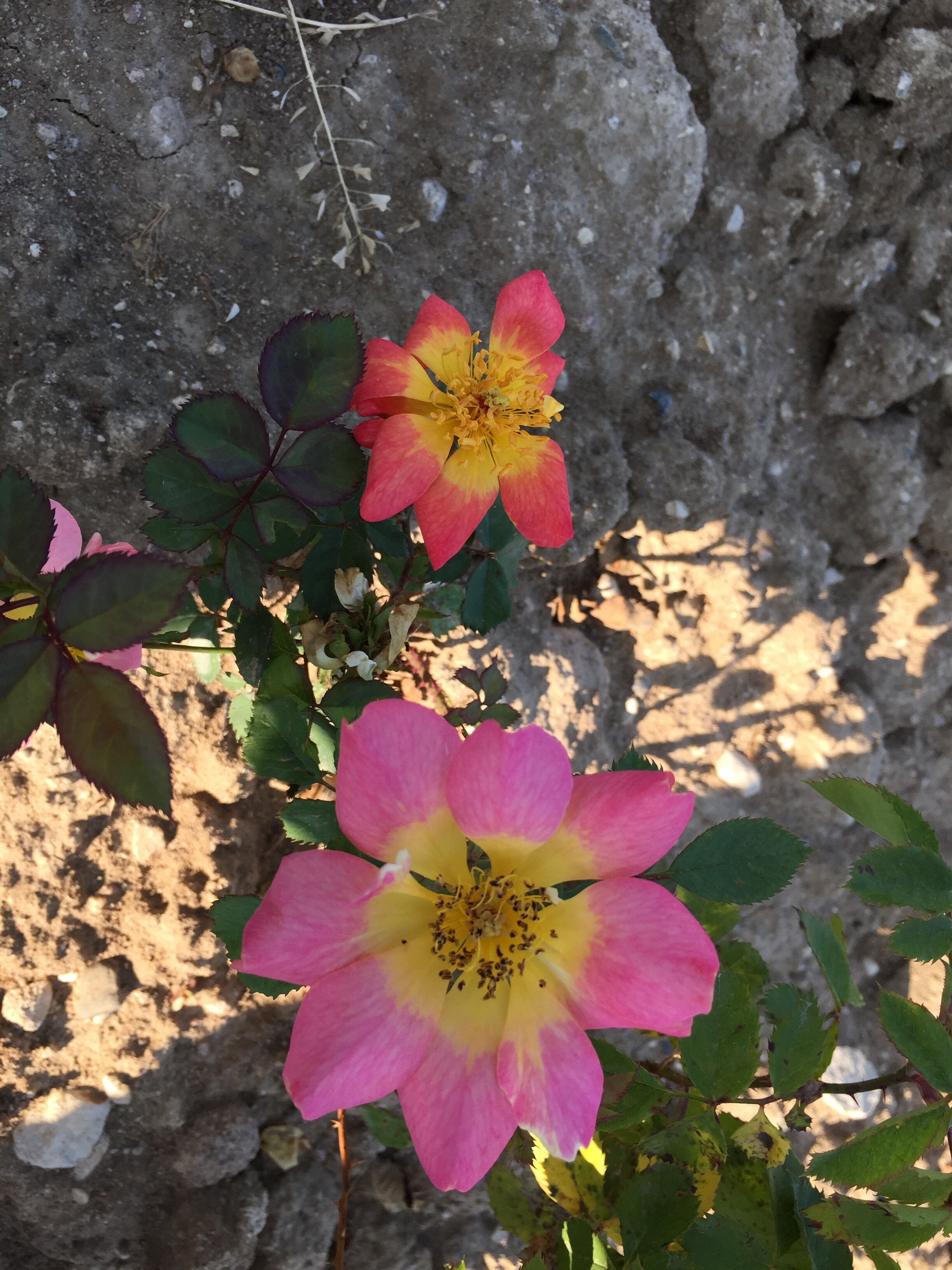 I have some seedlings that I’m wondering if you’d like to ‘test’ for me at some point. They are:

I also have a few crosses that germinated this spring using Red Dawn x Suzanne that might be interesting.

I’d be happy to line them out for a while, Rob, and see how they do. They sound like they could be some monsters!

Great Joe. I’ll be culling out any that lack resistance this season and I’ll see what they look like next season. I’ll send the best of the lot. All should be quite hardy and I look forward to seeing blooms.

That Art Nouveau cross looks like it is the type that will drastically improve with some maturity. Do not cull! Very interesting and worth waiting for it to turn into something even better. If you are afraid that it will not be field hardy (or tough enough to survive) and if it will root, I sure would like to try it in our longer and not so hostile climate and see if it can develop into something-I do have one or two Art Nouveau seedlings that shaped up to be nice plants.

Joe, I love your Will Alderman and Centifolia crosses especially! The Ann Endt x Hazeldean looks great. Hardiness will obviously not be a problem.

Thanks for the replies, everyone.

The Art Nouveau seedling has a fairly hardy pollen parent, so we’ll see what it looks like next year.

Thank you, Betsy, for sharing my preference for the other, hardier, fun crosses.

Here is Tuscany Superb x Persian Yellow. I have no confidence that Persian Yellow is actually the pollen parent, because I can’t see any signs of it and this rose is much healthier than either supposed parent. Last year I had thought maybe Morden 6910, which is growing nearby, was the actual pollen parent. This year I don’t know what to think. 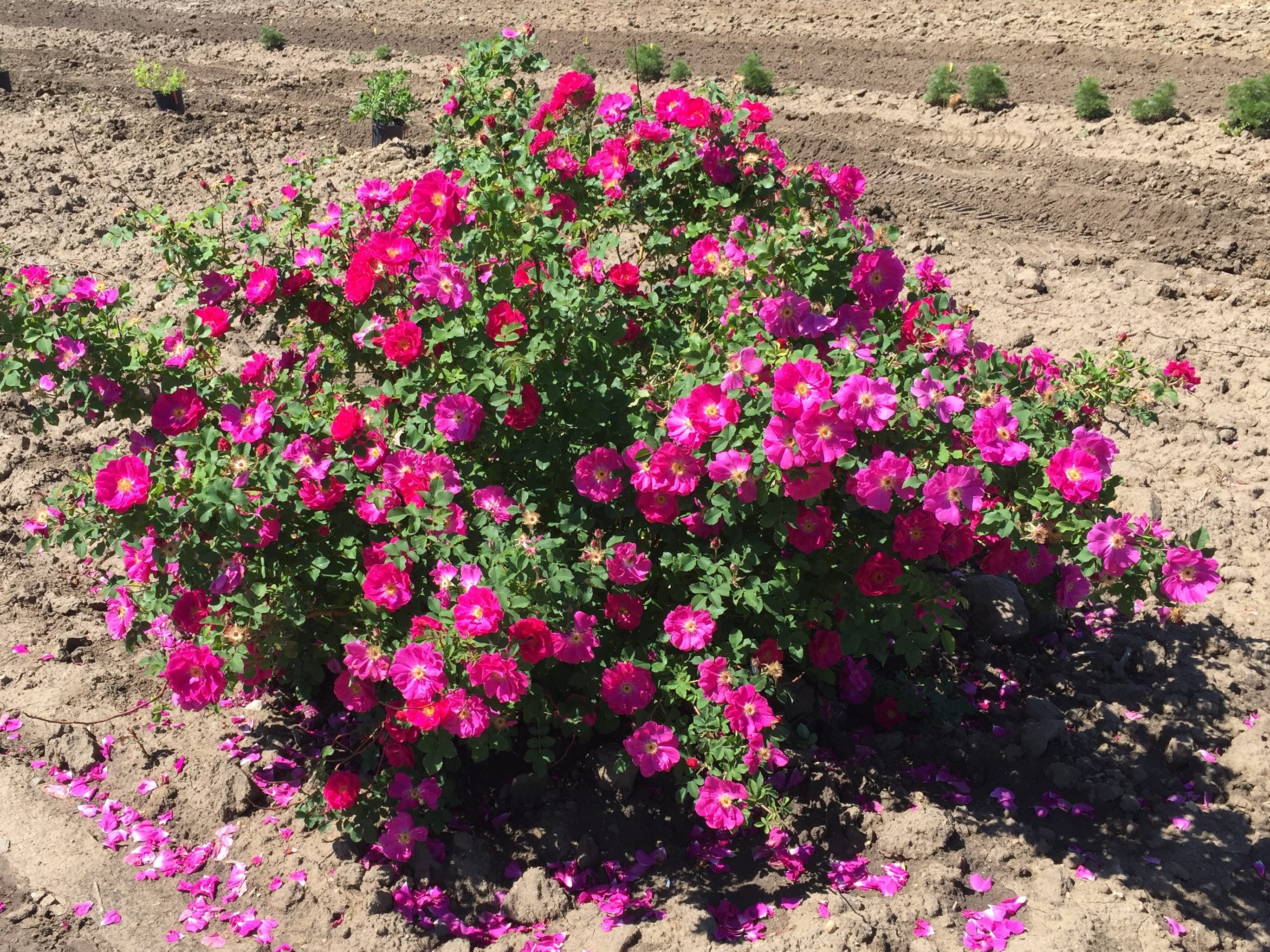 Joe, The R. carolina x R. centifolia cross is quite beautiful and that Tuscany Superb x Persian Yellow(?) is striking. This is what roses are supposed to look like. I know what you mean questioning the actual pollen parent, but last yr I picked some small hips from several foliosa x Henry Hudson (open pollinated) purposely sticking to small hips in hopes of getting some mystery crosses, and I cannot believe some of the results leaf wise. Pretty sure I have some crosses with rosa woodsii, Crepuscule, among others that I will have to wait for blooms to get a few clues. Hope they stick to the rugosa blooming schedule and do it next yr. After seeing the variety of leaf texture, foliage colors, growth, and other non-rugosa nuances, I am a little more accepting of the idea that a cross does not HAVE to bear at least some resemblance to both parents.

The ‘Tuscany Superb’ x ?Morden 6910 is what I would expect a rose of this cross to look like. It’s very beautiful, of course, and is ideally what roses in a landscape should look like - having a graceful or at least a semi-graceful appearance as it appears to be in the photo. Morden 6910 is a rose I have overlooked to use in breeding programs to contribute this characteristic to progeny, so thanks very much for the reminder.

By the way, I only had three flowers of a fairly new ‘Tuscany Superb’ shrub this year. Crossed them with ‘Caroyal’ and all of them took.

Paul, congrats on that cross. Could be some really lovely seedlings out of that cross. I haven’t tried gallica x rugosa, but they both seem to have a roughness to their foliage and horizontal resistance to disease that might end up creating a tough and vigorous rose. Albeit with the same potential sterility problems as ever when crossing diploid rugosas with tetraploids.

I put pollen from the Tuscany Superb x whatever seedling (I still don’t know what code name to give it - “Tusper” or TSM6910) onto the Carolina x Centifolia seedling…hoping for some of the graceful habit, larger and thicker petalled blossoms, and bright color of the pollen parent combined with increased hardiness and fragrance from the seed parent.

The Tuscany seedling is covered with hips. I didn’t plant any last year. I’m not sure how much field space I have left to evaluate large, once-blooming roses, but it would sure be fun to grow out a population of the seedlings and examine their variation.

I think it is interesting that this seedling has in three years built itself up into a much more substantial shrub than either Tuscany Superb or Morden 6910 (or Persian Yellow, for that matter) have. I kinda put that onto the gallica genetics combining well with other roses.

Although the parentage of Morden 6910 is given on HMF Roses, I don’t agree with it. I’ve always speculated it’s parentage is Rosa gallica/R. kordesii, and if so that would likely rule out its development at Morden. I don’t recall Morden doing such breeding work in the 1950’s or 60’s, for example, which could have led to the development of this rose. It’s more like what Kordes would have done.

… I haven’t tried gallica x rugosa, but they both seem to have a roughness to their foliage and horizontal resistance to disease that might end up creating a tough and vigorous rose. Albeit with the same potential sterility problems as ever when crossing diploid rugosas with tetraploids. …

Hoping to use it ‘Ann Endt’ again this season.

Very nice, Simon. I’ve been intrigued by Ann Endt’s potential. I think you could get some nice purples off her. Wonder if Plum Perfect (Thank You Rose, in Australia, I believe) would be a good mate. PP is a “Sunbelt” rose here, and is supposed to take the heat very well, while presumably sharing some Rugosa lineage, as a Kordes line. Very disease resistant too, purportedly. I want to acquire, but no experience with it yet.

Philip, ironically, Foliolosa arrived Sunday (along with a double Spithamea) with the repeated warning that it “suckers like a witch!”. And, it’s THORNLESS! I will be repotting it to allow it to sucker more wildly…interested? 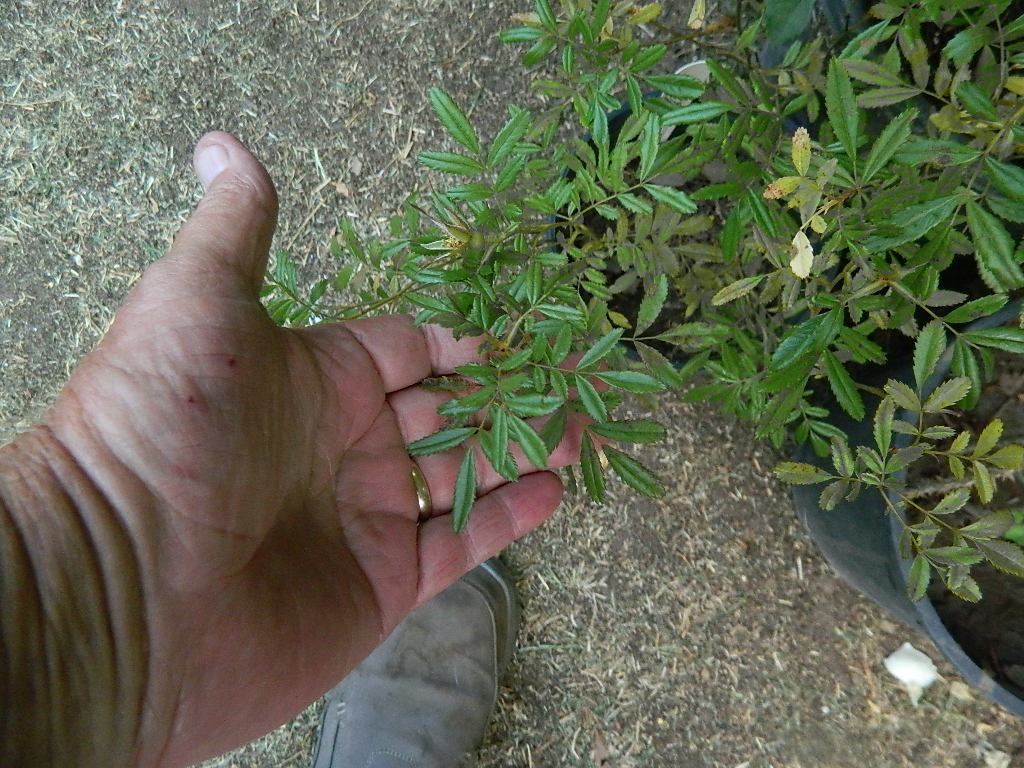 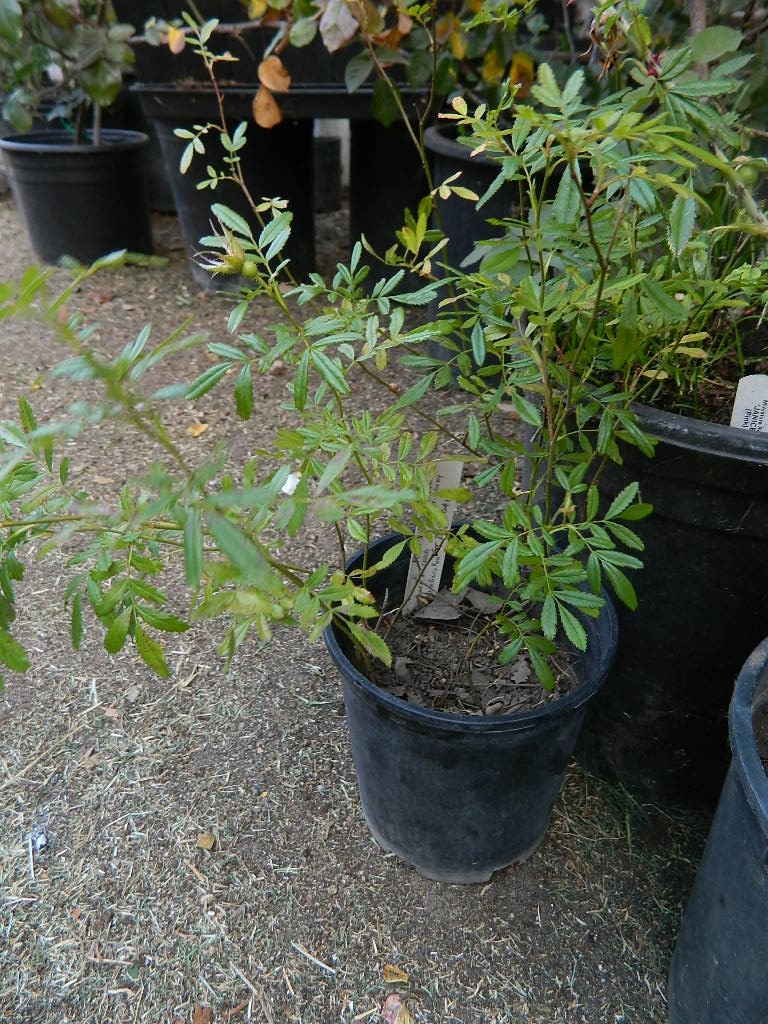 And how, exactly, does a witch sucker? LOL

If its thornless, it doesn’t sound so bad. Wonder what it would do mixed with fedtschenkoana-lines, foliage-wise. Have you crossed R.f. with anything mauvey?
If you are offering, I might just take you up on that. I’m assuming it would tolerate my new yard. Can I send you some TX treats in exchange?

Saw your other post about R. spithamea too, Kim. That is a totally new one on me. Do you have to burn down your garden to get it to bloom?

Simon, Paul was actually very generous to share Folio-chief with me many years ago when I first moved to Texas from Louisiana. I was out of town, and my wife potted it up for me in a clay pot and watered it well. Neither of us quite realized what TX can do to plants in a clay pot in one summer afternoon. It was crispy, and I was crestfallen. I still beat myself up over that one many years later. I’m not sure but what it is extinct now. But it was the plant that piqued my curiosity about foliolosa.
I note that you have Purple Rain, Simon… Just saying… (Would love to get my hands on that one…)