Rugosas - Why the lack of breeding activity?

Rugosa roses are the ideal type of rose for growing in northern (Zone 2/3) climates. The shrubs are cold hardy to these regions, having large, fragrant flowers that repeat their bloom. Yet it appears their development has slowed to a trickle. Very few cultivars have been introduced in the last 20 years or so. Of course the problem for present day, relatively small home landscapes, because of the shrub size often ranging up to 1. 5 metres in height and spreading to 1 metre or more, Rugosas are often unsuitable for growing in them.

It’s obvious for future development of Rugosas, their size has to be cut down, the colour range of the flowers has to be expanded, and new shrub forms developed. This can only be done, of course, by injecting species or species hybrids into them. Fortunately, we have seen more work developing cold hardy species hybrids in the last few years, but much more work can be done in this respect. For example, it would be interesting to develop a Rosa wichurana x R. nitida hybrid, which should be relatively cold hardy, low growing and have attractive foliage. Both species independently have been hybridized with Rugosas, the first eventually leading to the development of Rosa kordesii and the latter the development of a few good Rugosa cultivars. So, it would be interesting to see what the combination of these two species crossed with Rugosas would produce.

I’ve always maintained that ‘Schneezwerg’ is the most valauble Rugosa to work with in a breeding program for this type of rose. Cold hardy to Zone 2, its white flowers can be “painted” with any colour, and they repeat extremely well. Because it’s not a pure Rugosa, there is more shrub form variation in the progeny than normal. Very little work has been done crossing this cultivar with species or species hybrids, so I think the potential is enormous to develop new Rugosas using this strategy. My priority next year is to cross this cultivar with Rosa wichurana, which, as far as I know, has never been done before. And if I’m fortunate, since I have both species, I may also be able to do a Rosa nitida x R. wichurana cross.

The good thing about working with Rugosas is there apparently isn’t much competetion, but I actually wouldn’t mind it if there was more. We all benefit, of course, when there is good competetion in any type of rose breeding program.

Along that line I recommend the Schneezwerg × Némésis (china, Bizard, 1836) rugosa cross developed by Dr. Felicitas Svejda as a starting point for further development. I have obtained nice plants from open pollinated seedlings.

I’ll love to work with them, but I won’t be able to devote a lot of time just yet they are huge and thorny as the dickens! Morjerry seems to be a good parent for some of the needs here, just needs form improvement and less thorns.

Not lack of activity, rather lack of introducible achievements.
Since introduced many many breeders tried and still try.
Many introduced a few, but if some are outstanding most are dead breeding ends.

As many among us found or not: rugosa breeding is quite difficult.
As much it is easy to get another rugosa within the range, as much it is difficult to integrate a new feature without loosing the positive ones.

From personnal experience, many outcrosses are quite sterile, so much that most introduced hybrids are.
And the nicest or fertile ones do loose much of desirable species features.
Back or sibcrosses mostly return to species.

Its faults such as heat sensitiveness or short lasting crimped petals or stiff larger plants or calcium sensitivity are rather difficult to outbred.

This said while difficult I consider there is a lot to achieve.

Rugosa’s are difficult to use, one of the big problems is they shed their pollen with the slightest touch even when the petals are very tight. Its ok if you like a lot of selfs when the real aim is to incorporate new genetic material into your breeding. A rugosa hybrid I used, and which alot of people will say its a rust bucket has given me some interesting results, ( this cultivar has never rusted for me).

Vanguards breeding is that commonly used (Rosa Wichuraiana X Rosa Rugosa) X Eldorado. I did this cross (Wendy X Altissimo) X Vanguard, and got this seedling semi double blended shrub, very fertile and hips are huge like Altissimo. Its seeds germinate quite freely, developing into strong plants. Its repeat is excellent as is its health. 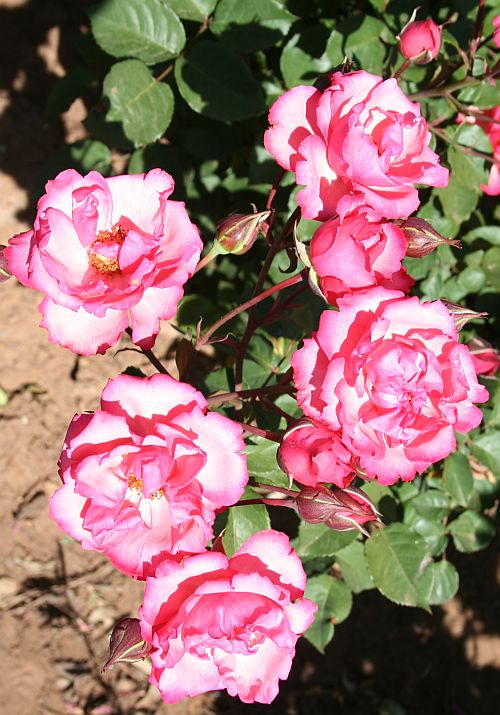 Robert Erskine’s ‘Waskasoo’ appears to be a truly dwarf Rugosa in a Zone 2/3 climate. Its height is about 75 cm. and its width 60 cm. It hasn’t been propagated or sold by a commercial nursery, except I’ve had Brentwood Bay Nursery on Vancouver Island propagate it for me. Since its parentage is 1/4 Rosa nitida, it just occurred to me to cross it with ‘Aylsham’, which is 1/2 Rosa nitida. Perhaps some of the progeny will be dwarf shrubs.

I’m using a few rugosas in my breeding lines. I pulled out Rugelda and her descendants Keith’s Delight and Carmela as majority of seedlings from these lines were BS prone. Actually all three of those roses have BS issues in my garden.

I have a few F1s of Rugosa #3 that I’ve kept and I’m still working with Ruglauca which is Rugosa #3 and R. glauca. Rugosa #3 has been pulled.

Then I came across Raspberry Rugostar which is Flower Carpet White × Frau Dagmar Hastrup. RR looks every bit a rugosa, sets OP hips and is fertile both ways in crosses and I’ve had no disease on her. It’s too early to tell but I’m hopeful of producing some nice things out of RR.

I also have Bella Nitida which is rugosa and nitida. BN is a nice mix of both species, sets nice hips and is healthy. It blooms once but for a long period.

I’ve kept Therese Bugnet as I think she has much to offer. Nothing notable yet using TB.

The last ones that I have but haven’t used heavily yet are “Fire’n Spice” and MORjerry. Both have rugosa blood but the exact parentage aren’t know. This season I have hips ripening with MORjerry as the pollen parent.

There hasn’t been much work that I can see using Raspberry Rugostar and Bella Nitida and I’m hoping that using these ‘new’ rugosa blood will give me some good results. If I could get a hold of Schneezwerg I would use her as well. Anyone have any suckers or extra plants of Schneezwerg? 

I have just started down the rugosa road.

I’m interested in Henry Hudson, which is a second-gen OP seedling of Schneezwerg. There seems to be some interesting variation in the seedlings. I’m kind of regretting letting my dad grub out HH (It had grown up with some quackgrass)…but I spotted some blooms down in the swamp where he tossed it so all hope is not lost.

Henry Hudson, Belle Poitevine, and Rugosa #3 are the rugosas that I’ve been working with. HH and BP seem to be pretty strict outcrossers, that is if there is a hip it is likely from foriegn pollen. Controlled crosses often fail but when they succeed the results are interesting. It is fun to just collect seed and look for seedlings that have juvenile bloom or obviously non-rugosa characteristics.

I think I have hips from Rugosa #3 x Grouse and from R. nitida x Grouse. I also have hips on both of those from Oso Happy Petit Pink.

The whole Modern Tetraploid x Rugosa path… I’m just getting started down, but it intrigues me. A lot of my OP Belle Poitevine seedlings seem to be from a nearby John Cabot. They are scraggly and single with bare-stemmed bottoms, BUT they rebloom and seem pretty hardy. They were planted out in 2013 and have seen one winter. They appear to be mostly seed-sterile. The same description fits a lot of my OP Rugosa #3 seedlings. I picked out mostly those with non-rugose leaves.

This year I have some seedlings of Blue for You x Belle Poitevine, Prairie Joy x Belle Poitevine, First Impression x BP, and a few others. In most cases it is hard to see the rugosa influence save for some extra thorns and in some cases extra vigor. You have to assume that they’re triploids that have 2/3 of their chromosomes from the tetraploid parent and only 1/3 from Belle Poitevine. The question of the day…how much hardiness have they gotten from those rugosa genes? The next question, assuming they survive and thrive, is whether they have any fertility.

It’s good to hear, Rob, about Raspberry Rugostar’s health in your climate and its fertility.

Pierre, I am grateful for the warnings and happy to follow you down this long road.

I think Henry Hudson has potential.

These are pictures of HH x OP seedlings: 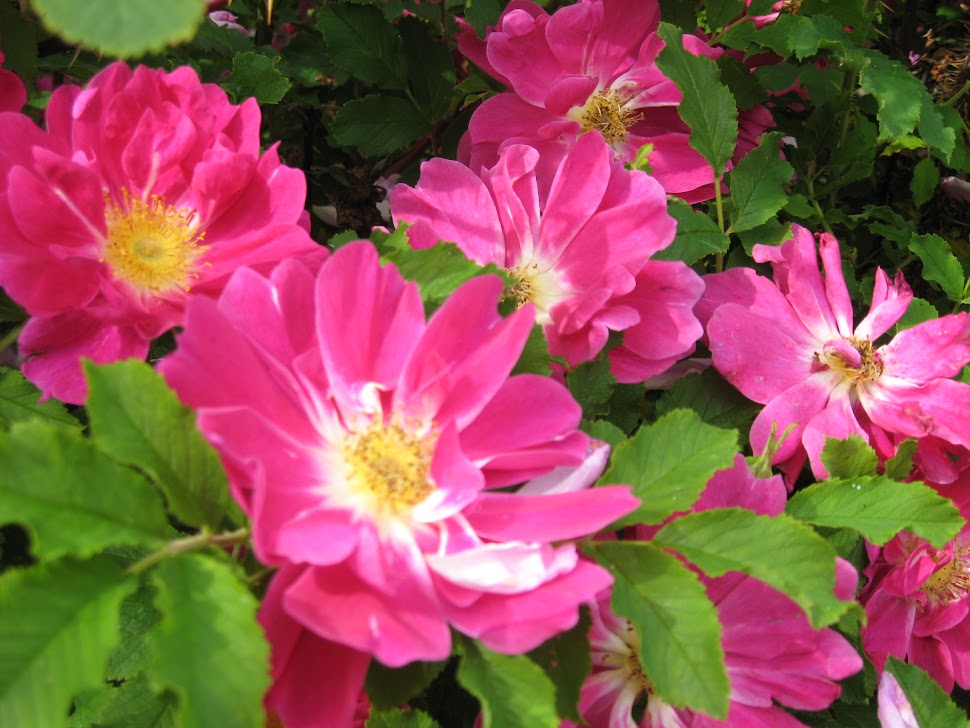 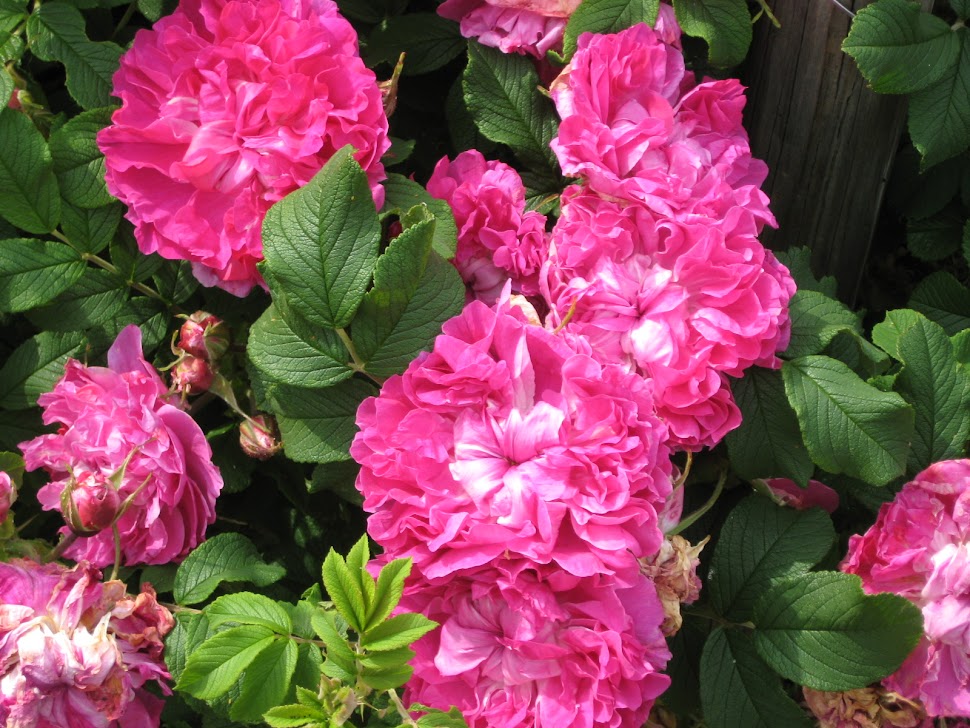 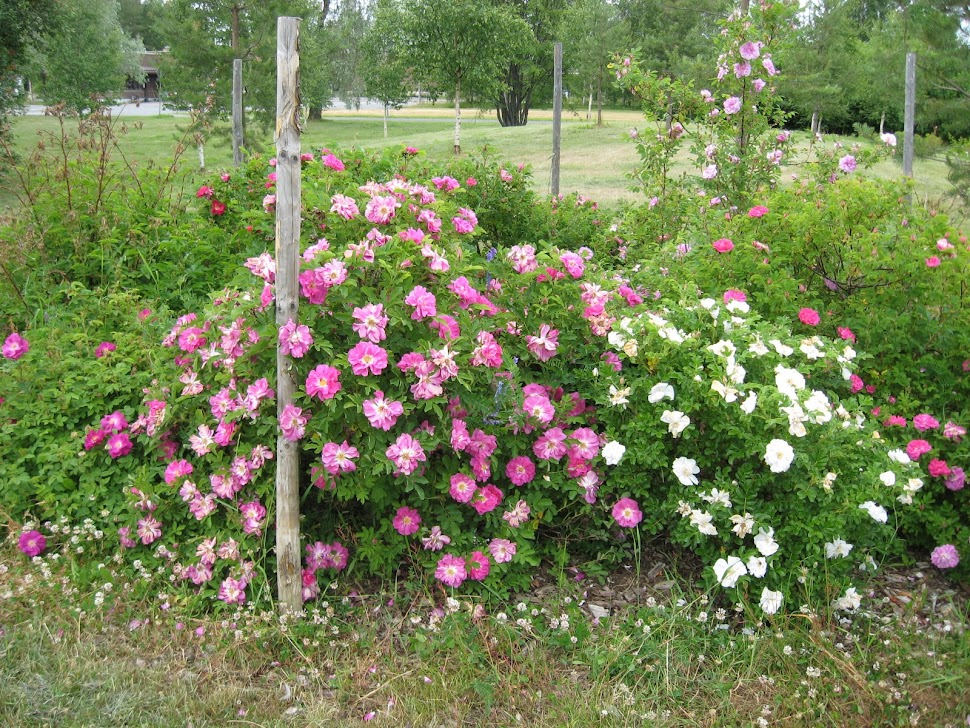 In my experience, anytime you cross Rugosa with something modern (China pedigree), you break everything good in the Rugosa; disease resistance, retrained growth habit, bloom quality - you name it, it gets broken. However, if you mate Rugosa material with North American diploid species, really decent things can happen. The problem is that most who attempt it, rush in with China genes and the results are generally dreadful.

Hmm. Any suggestions on the best mini rugosa and what MORjerry can do? I am excited about MORjerry.

I couldn’t get anything at all out of MORjerry. Zero hip set. I can’t remember how much I tried to use pollen, but I’m pretty sure there was something discouraging about it as if it maybe didn’t produce much.

Hmm. It seems to be so… promising

Maybe the wrong partners? It will be hard bringing dwarfing to the rugosas (you have to avoid China blood- I have seen the deterioration myself…)

I have some Royal Edward x MORjerry hips ripening. I think with another rose as well

Ooh. If any are worth working with, could you please send some over?

Worth the wait by far.

Many fertile rugosa vars are quite self sterile and self pollinate only at the end of flowering.
For these confirmation is that there is no fruit set without compatible pollen and pollinator.

“In my experience, anytime you cross Rugosa with something modern (China pedigree), you break everything good in the Rugosa; disease resistance, retrained growth habit, bloom quality - you name it, it gets broken. However, if you mate Rugosa material with North American diploid species, really decent things can happen. The problem is that most who attempt it, rush in with China genes and the results are generally dreadful.”

For more than ten years I intensively followed this path, avoiding china blood and incorporating most North American diploid species beside bracteata and a few others.
That is why I can say that rugosa faults such as heat sensitiveness or short lasting crimped petals or stiff larger plants or calcium sensitivity are rather difficult to outbred.
I should add difficult to outbred in a fertile progeny. And that many faults as well as some qualities are closely linked to intrinsic with rugosa foliage distinctive features.

So much I am exploring another strategy.