Does anyone know what the RoKSN alleles of the diploid rosa wichurana are?

In the paper “Diversity and selection of the continous-flowering gene, RoKSN, in rose” by Soufflet-Freson V. et al. (the team of dr. F. Foucher), Fig. 4 states that Rosa wichurana has RoKSN_G181 allele. In the video on youtube, dr. Foucher explains an experiment between Old Blush and Rosa wichurana and in this experiment Rosa wichurana is said to be RoKSN_copia/RoKSN_wild_type.
What are your views on this? Are both correct?
But also, in fig. 4, the accumulation of the RoKSN transcipts are mentioned. For rosa wichurana, this is huge, which explains it’s Once Flowering character. At the other hand, For a rose as ‘The Fairy’, which also contains the RoKSN_copia allele (I do not know if it has tis allele on the two sets of chromosomes or only on one set of chromosomes), the accumulation of RoKSN transcripts is almost non existing in 2013, relatively speaking, somehow explaining it’s reblooming character. (it was not measured in 2014) 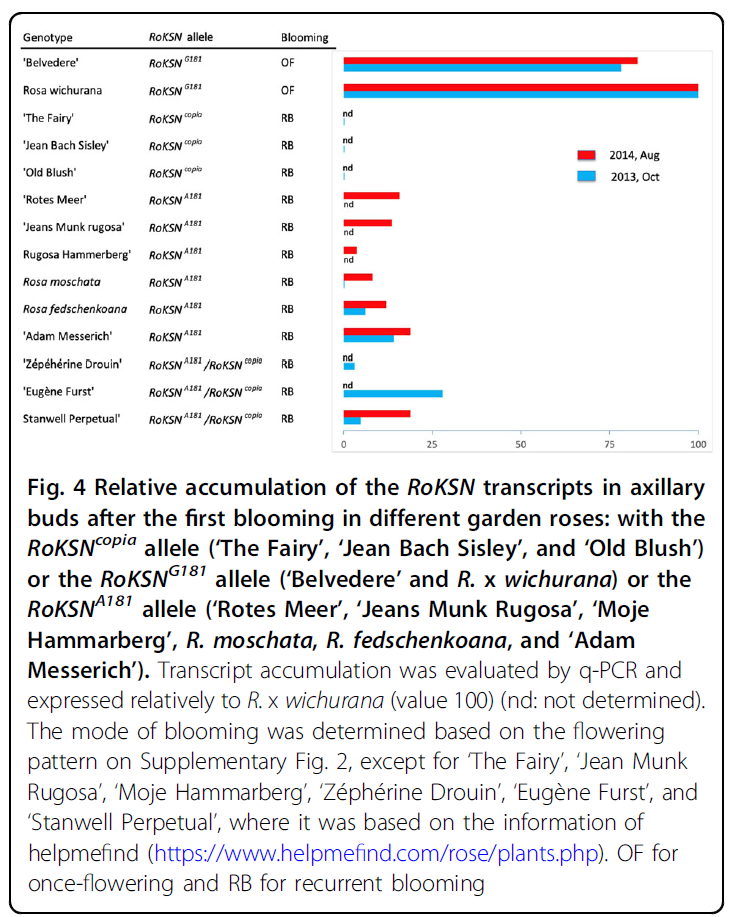 So I am wondering now, does rosa wichurana actually has the copia allele (I gues the answer is yes, but only once) and maybe the Fairy might have 2 alleles of the copia allele?
Unfortunately, these two roses are not part of the supplementary table 8 that comes with the paper.

Then at the other hand, a rose like “Blush Noisette” is according to the supplementary data RoKSN_copia/RoKSN_wild_type as well as RoKSN_G181, which if I understand it correctly, would be exactly the same as rosa wichurana…
and yet, the one (rosa Blush Noisette) is very well reblooming, while the other is not reblooming at all, yet both are diploid…
It puzzles me. or am I missing something something here?

Pretty much throughout the text, including in the text accompanying Fig. 4, the accession listed in the table in Fig. 4 is actually written as “Rosa x wichurana”–although the convention of indicating a hybrid in this way is not very scientific and is not at all proper from a nomenclatural perspective, it is actually an F1 hybrid of R. lucieae (R. wichurana) and not the straight species that was used. Unfortunately, it is sloppily written as simply “Rosa wichurana” in the figure itself, but only in that one instance. It is too bad that no reviewers who might have caught these sources of confusion were sought out prior to publication.

In another paper, the hybrid that is probably being referenced as “Rosa x wichurana” is mentioned being from a cross between the species and Yesterday: https://www.nature.com/articles/s41477-018-0166-1

I can see clearer now

It is indeed a pitty that this error slept through the peer review as well as the review of the many authors. But then again, mistakes happen.

It would have been much more clearer to me indeed if they would have explicitly called the rose “wichurana F1” or something like that, drawing the attention to the fact that it is different from rosa wichurana, aka Rosa luciae var. wichuraiana Koidz.

But then again I remain with another thing that is not exactly clear. I must assume that when they mention the allele, this means that the rose is homozygous for this allele? So when one has a diploid rose like the Fairy, it would contain RoKSN_copia twice, one on each set of chromosomes? Or am I going too fast here? Could it also be that the Fairy has RoKSN_copia and RoKSN_LTR for example? It is a pitty that not all the roses from fig. 4 are actually included in supplementary table 1, since the text explicitly states that the roses in supplementary table 1 have observations regarding homozygousity or heterozygousity for the RoKSN allele. (Which, to make it even more complex, does say nothing about the null_allele (not really being an allele, since it concerns a deletion, but a deletion which has a huge influence in a rose like Old Blush (cf. video mentioned above) that might be there as well, but is not in the data). So it could be that what is valid for supplementary table 1 is not valid for fig.4…

And then there is another little typo in the table. Jeans Munk rugosa is probably Jens Munk. So we might probably assume from the table that it is homosygous (homozygote since it is a diploid) for the RoKSN_A181 allele?

Still, I have no answer on the question why rosa Blush Noisette is reblooming well and has the alleles RoKSN_copia as well as RoKSN_wild_type…

The identification of the Rosa S-locus provides new insights into the...

This study aims to: (i) identify the Rosa S-locus controlling self-incompatibility (SI); (ii) test the genetic linkage of the S-locus with other loci controlling important ornamental traits, such as the continuous-flowering (CF) characteristic; (iii)...

In the Supplementary Materials, there’s an excel with some more copia findings. The Fairy is in that, no mention of it having either a null or wild so would assume two copia.

I don’t believe that the pure species (R. lucieae/R. wichurana) has a copy of the RoKSN_copia allele. Even if some rare individual were to somehow have it (which I rather doubt is the case), that would not somehow translate to it being present in the entire species anyway. If such an allele were generally present in a wild species, there would be random everblooming members of the species occurring as a minority of the population, because a certain percentage would be homozygous for the allele.

I also don’t believe that the study actually indicates ‘Blush Noisette’ as having RoKSN_WT. The way they have tried to show the alleles present in each variety is simply very confusing, and maybe worse than confusing. Of course, any rose possessing the wild type allele is incapable of the continuous flowering behavior seen in ‘Blush Noisette’. If ‘Blush Noisette’ performed as it does in spite of possessing a wild type allele, that would be a noteworthy scientific discovery that would have gotten its own discussion (and might have led to a whole new study and paper).

@Plazbo; Thank you! This really seems an interesting publication. And the supplementary tables are great as well.

The suppl.table.1 cleary states for Blush Noisette “RoKSN_copia, RoKSN_wt”. The rose tested here originated from Jardin botanique de la Tête d’Or de Lyon in France. But in the the paper Plazbo mentions above, from Kawamura et al. (2022), this rose, but now from the Gifu World Rose Garden in Japan, was tested as well, and they found the same results.

I agree this is definitely something that the scientific world will have to investigate on further. So hopefully more papers will follow to resolve this. I really think the whole theory about rebloom is in need for some new and refreshing ideas. Actually, the authors do state something simular:

“However, we observed lots of genotypes (96 out of 117) that were able to rebloom with different intensities (Supplemantary Table 1). These results suggest that the recessive hypothesis may be wrong. Other elements should be taken into account as: (1) other loci can interfere with the RoKSN locus as proposed, (2) other alleles can be present at the RoKSN locus which were not considered, as the RoKSN_null allele, (3) we should consider the dose of the allele in a polyploid context which is known to modify the expression of the phenotype as shown in Brassica for flowering date, and (4) we cannot exclude that the RoKSN_copia allele can interfere with the RoKSN_wt allele by modifying its expression as described for the paramutation where one allele (paramutagenic) can silence the other allele (paramutated) with a high variability in the penetrance and heribility. Further analyses should be necessary to verify these hypotheses.”

I regret it though that they only say this at the end of the paper, and did not already mention some of this information while discussing table 1. Maybe the authors didn’t want to elaborate too much on this table but they actually should have since these findings are really of huge importance.

concerning R. wichurana, x wichurana, luciae;
I have been looking up what is said about this rose in the marvelous publication about Louis Lens and his roses, by Ivo Pauwels: “Louis Lens. De elegantie en de roos.” According to this book, one should distinguish between rosa wichurana and rosa luciae. This complicates things a bit… is the rose that we think of as rosa wichurana, and which is all over the place at rose gardens, and maybe even selled as rosa wichurana really a species or is it an F1 hybrid from rosa luciae?
A lot of the roses that have wichurana in their pedigree might go back to this F1 hybrid. But yes, it does complicates everything!
I quote what the book is saying about this. the author had done a lot of interviews with Louis Lens and from those interviews, as well as the archives of Lens himself, the book was compiled:

In english:
p. 86 […] Another rose that also blooms in nurseries and that Louis praises for the genes it has given to many strong climbers in the past is Rosa luciae. She is very similar to Rosa wichuraiana and in the past, Louis knows, she was often confused with it. The branches(*) of Rosa luciae are somewhat stronger so that the rose has a more bushy appearance than Rosa wichuraiana. The leaflets in the compound leaf of Rosa luciae shine less brightly than those of Rosa wichuraiana and Rosa luciae has even more problems getting through our winters.At the beginning of the 20th century it was mainly the breeders from Oréans, Messrs Barbier and Fauque, who won beautiful climbers with Rosa luciae. Every year, Louis is in awe of roses such as ‘Albertine’, ‘François Juranville’, ‘Albéric Barbier’, and ‘Léontine Gervais’ from Barbier and the somewhat delicate ‘Aviateur Blériot’ and ‘Gerbe Rose’ from Fauque. Louis realizes that he should start from a variety of Rosa luciae, which he also received from Baroness de la Roche. Rosa luciae var. onoei is not an eye-catcher, but it is sufficiently hardy. […]

(*) in Dutch: ‘ranken’, in English translated here as branches since I cannot find a good translation. Maybe ‘vining branches’ is more correct

Rosa lucieae is a variable species with a fairly wide range and several varieties (at least three, var. lucieae, var. fujisanensis, and var. onoei, are currently well recognized). While observable variation in a species can be substantial and of great importance for horticulture, and extremely significant in breeding, it does not mean that each such variant deserves recognition at the rank of species or has even been named scientifically. At this point, the taxonomic consensus is that we are talking about a single species, and Rosa lucieae is its earliest valid name (spelling corrected according to the International Code of Nomeclature for algae, fungi, and plants because it was named in honor of Mme Lucie Savatier). It’s useful to refer to natural variants of a species that have particular traits of interest by their correct names when we want to be more, well, specific. However, in this case, R. wichurana is regarded as a synonym of R. lucieae var. lucieae and the name does not actually denote any differences of recognized taxonomic significance.

Thanks for the explanation Stefan

It seems a common thing, to use the wrong name of species, but thank you for pointing this out.
It would be nice of HmF would somehow be able to mark the official scientific name?

It is a bit the same with rosa spinosissima. Some still call it incorrectly rosa pimpernellifolia.

Yes, that would be very nice thing to record in HMF! There are some excellent nomenclature sites that can be used (GRIN Taxonomy, RBG Kew’s Plants of the World Online, and Catalogue of Life are great places to start; of those three, GRIN Taxonomy actually reviews names for validity). Cultivar nomenclature and trademark display are also problematic at HMF, which results in a fair amount of confusion for users.