This 2018 seedling is still just a little too small for me to put in the ground, so I’ll be keeping indoors over the winter. Aside from the spinosissima influenced foliage, it has reddish tints to the stems and leafstalks. The seed parent (I call “White Native”) has no anthocyanins visible in the whole plant and selfed seedlings are similarly all green.

Guessing some day when it blooms, it’ll be light pink? 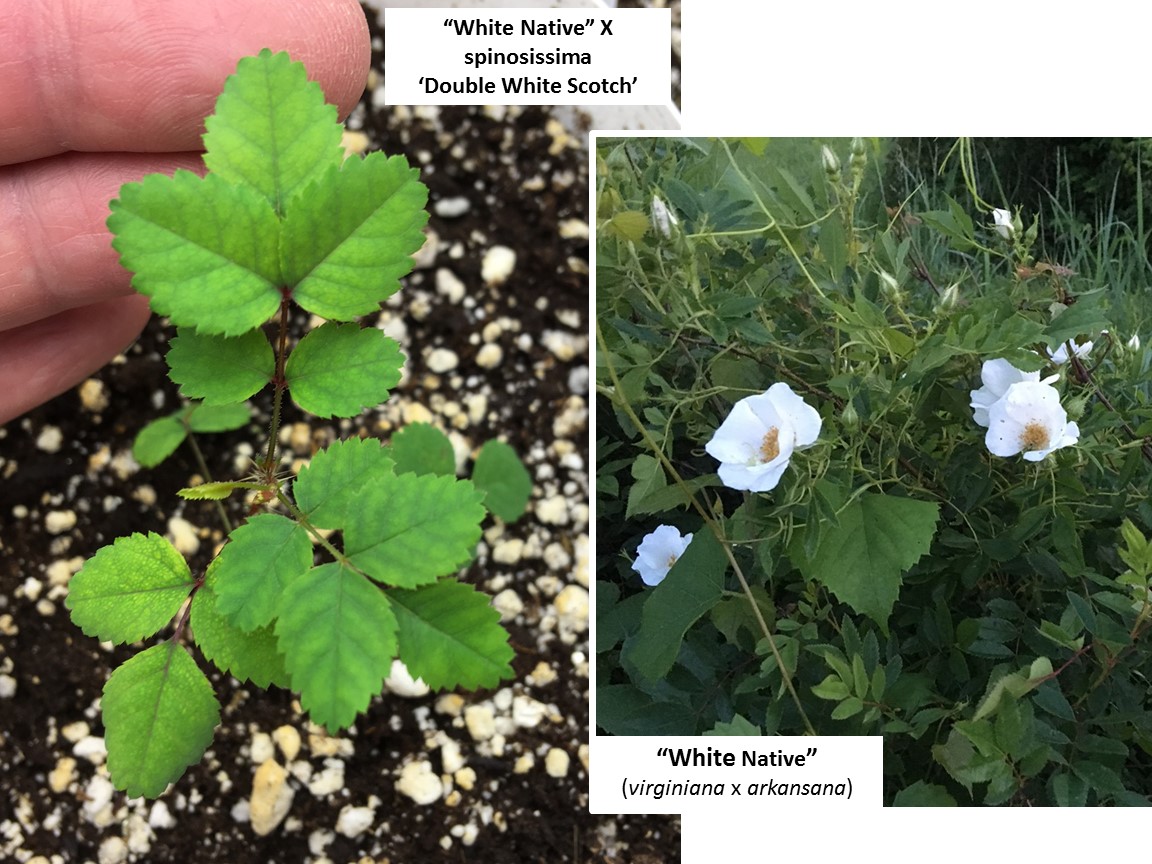 Which form/cultivar of Rosa spinosissima did you use?

I have similar crosses that gave red stems and white flowers. White is always appreciated.

Thanks Joe!
Johannes, the spinosissima I used was purchased as ‘Double White Scotch’. I have a picture somewhere but can’t seem to find it. I’ll have to see if I can get another picture of it in the Spring.

I like the var. altaica. I was just curious.

Thanks Rob!
By the way, is your Lemon Splash x “3/4 Native” seedling doing alright?
I ended up with a handful of seedlings this season from “3/4 Native” pollen. It’s pretty likely that none of mine will repeat bloom but I’m still encouraged enough to use it some more next season.
Here’s a current fun one for foliage color: 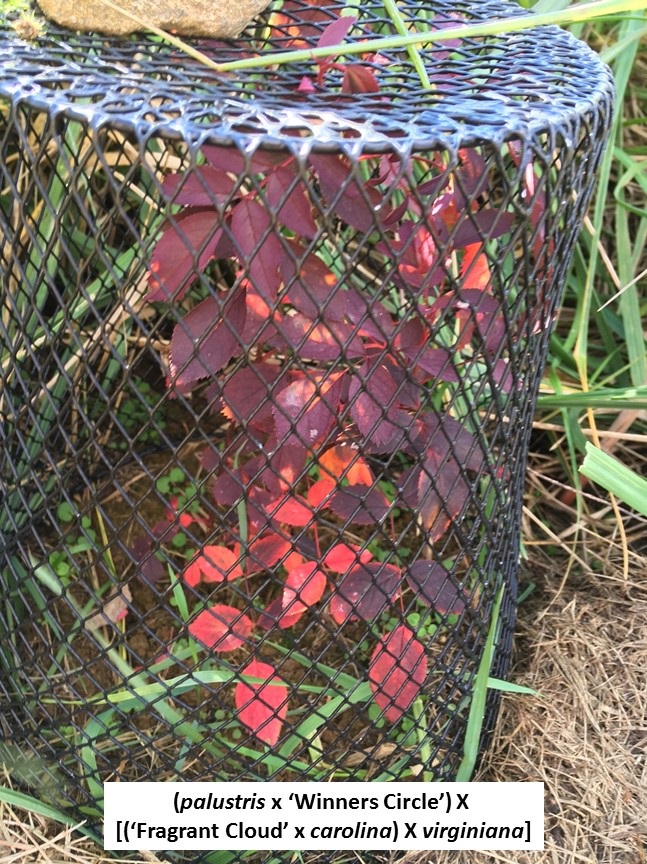 Thanks Rob!
By the way, is your Lemon Splash x “3/4 Native” seedling doing alright?
I ended up with a handful of seedlings this season from “3/4 Native” pollen. It’s pretty likely that none of mine will repeat bloom but I’m still encouraged enough to use it some more next season.
Here’s a current fun one for foliage color:rose seedling.JPG

I’m down to 3 Lemon Splash x 3/4 Native seedlings. This was their first season and none bloomed. 2 have small leaves much like miniature roses. The third has medium size leaves. All have good disease resistance and I’m excited to see them bloom. Hopefully they will next season. I have similar fall coloring on my F1 as that shown in your picture. Next season I’ll be using more disease resistant seed parents than Lemon Splash.

I have OP seeds from your R. carolina x R. gallica this winter to germinate. Unfortunately none of the crosses I made onto your plant took. Next season I’ll be using it as a pollen parent. Excellent disease resistance on this one and it bloomed the second season I had it.

Thank you for sending me such interesting roses to work with! Do you think I could get plant of your White Native at some point?

Sadly, carolina x gallica is battling RRD here now. I’m hoping its rhizomatous nature might allow for a piece to escape infection, but it’s a long shot. I can probably still collect a few seeds before it goes and I’ve already got seedlings planted out in another spot, so all is not lost. I also got a few seedlings from the F1 ‘Fragrant Cloud’ x carolina before it died. The last season that it had a few normal blooms I used ‘Commander Gillette’ pollen on it and have 4 or 5 seedlings from that cross. The biggest is nearly thornless and I hope it’ll bloom in the Spring. I guess the take home message is that being half carolina doesn’t protect a rose from RRD.

I’m glad you’re getting a few fun seedlings from “3/4 Native”. I got a boatload of seeds this season by using its pollen on ‘Angel Face’. I know everybody poo-poo’s using poor old disparaged ‘Angel Face’ but sometime you should check on Help Me Find how many accomplished hybridizers have registered ‘Angel Face’ babies. It’s a pretty long list. So as many faults as it might have, it isn’t necessarily useless. And it was such an agreeable mama. I’ll take whatever seedlings I can get. In any case, I’m going to be putting “3/4 Native” to more use next season.

I’ll e-mail you off-forum to confirm your mailing address for “White Native”. I hardly ever check the PM’s here but I saw that our last conversation I’d mentioned I was planning on send that one and the “V3” virginiana this Fall, like right now. LOL
I’m so glad you reminded me, because somehow that note didn’t make it to my reminder list.

Glad to see you using Spins in your hybridizing. I just found a number of OP seedlings from Isa Murdock. They’ve been in stratification for 2 years. By the way - your rugosa x xanthina cross is growing quite well here in GA.
Stephen

That’s great to hear Stephen! I need to see if I can relocate your e-mail address. If not I’ll PM you on here.

It’s cool that you’re getting seedlings from ‘Isa Murdock’. I wonder what pollen parent the bees have chosen…

Hi again Stephen,
I tried e-mailing to the last e-mail address I had of yours, but it bounced back undelivered. And I can’t figure out how to PM you here for some reason. Your profile doesn’t show as a link.
Anyway, I was going to try to surprise you but figured it would probably be best to let you know a package is on its way south, so you can be on the lookout for it. It’s small and I know that we’ve missed stuff before for a few days on our front porch.
I used the mailing address that I had from before. I hope that’s still right.
We’ll just let the surprise be that you won’t know what’s actually in the package until it gets there.