I’m super impressed with seedlings of R. maximowicziana. They have been very cane hardy (I’m in zone 4) and very vigorous. Here are two of them that have been great stand outs this year. The double white one is a seedling with a thornless double pink polyantha (95-1 code name) x R. max. I’ve had it since about 2008. This plant was just planted from a gallon pot last year in this spot. The single white one is with Kathy Zuzek’s single pink polyantha ‘Lena’. They are so vigorous, especially the ‘Lena’ baby. I was wanting to put the canes up on the wire this spring (they sprawled on the ground last year and I didn’t get to it). Last year the original plant (planted 2019) was cut back to a foot or so and moved to the current spot. In the old spot there is a sucker from the root (doesn’t generally sucker) that grew back and is in bloom now too.

R. max. isn’t super healthy, but is durable and healthy enough to keep going. My hope is to continue to reshuffle its genes with modern diploid polys for the most part to bring in greater cane hardiness to rebloomers and the bit healthier foliage of the better current polys. 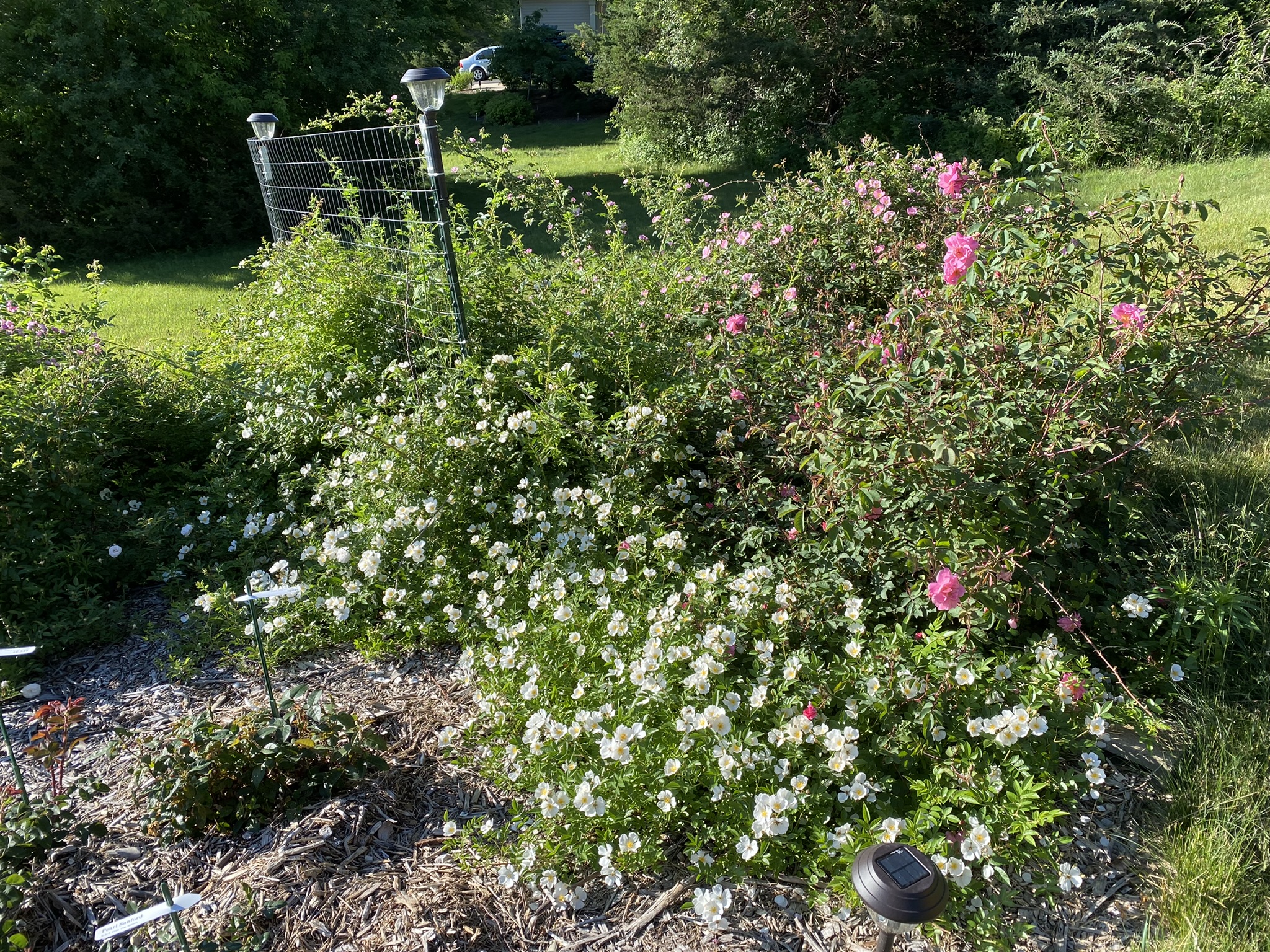 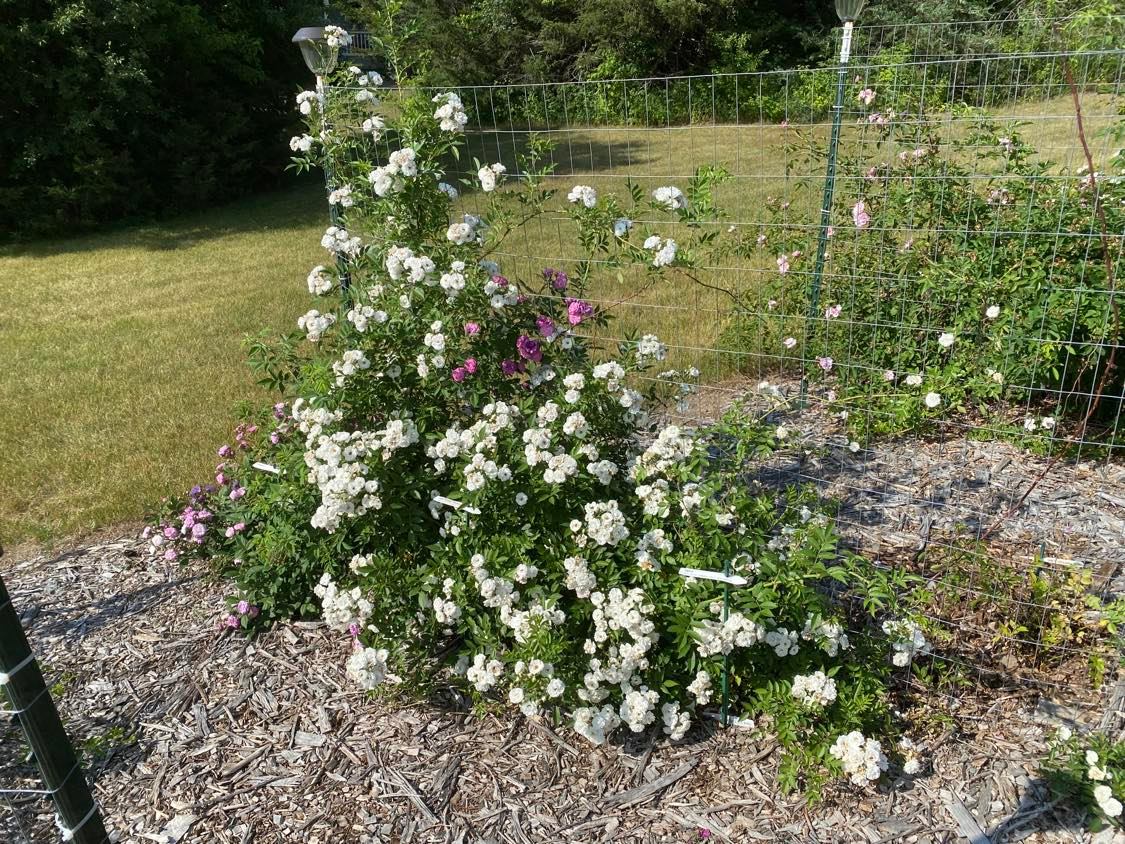 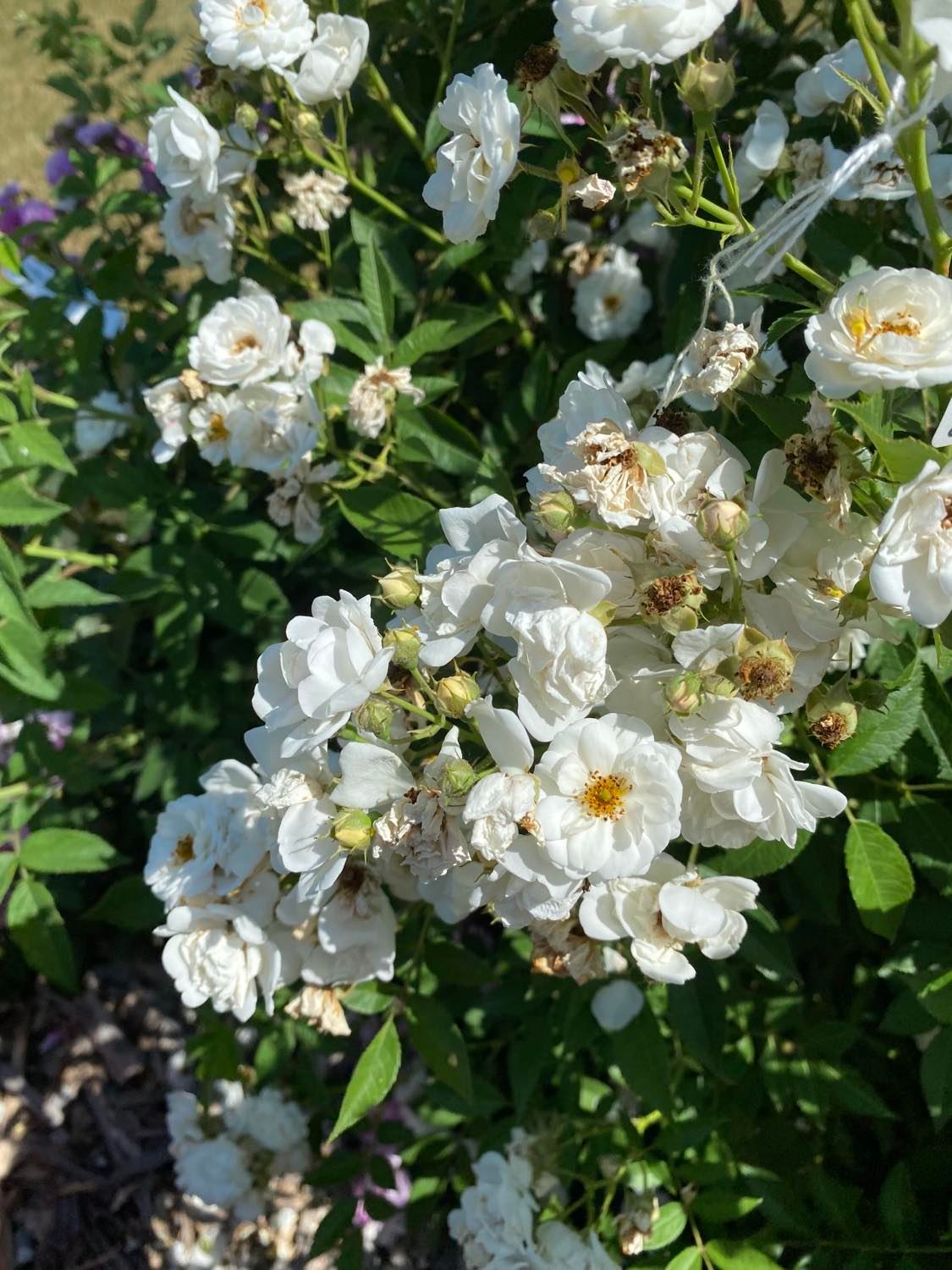 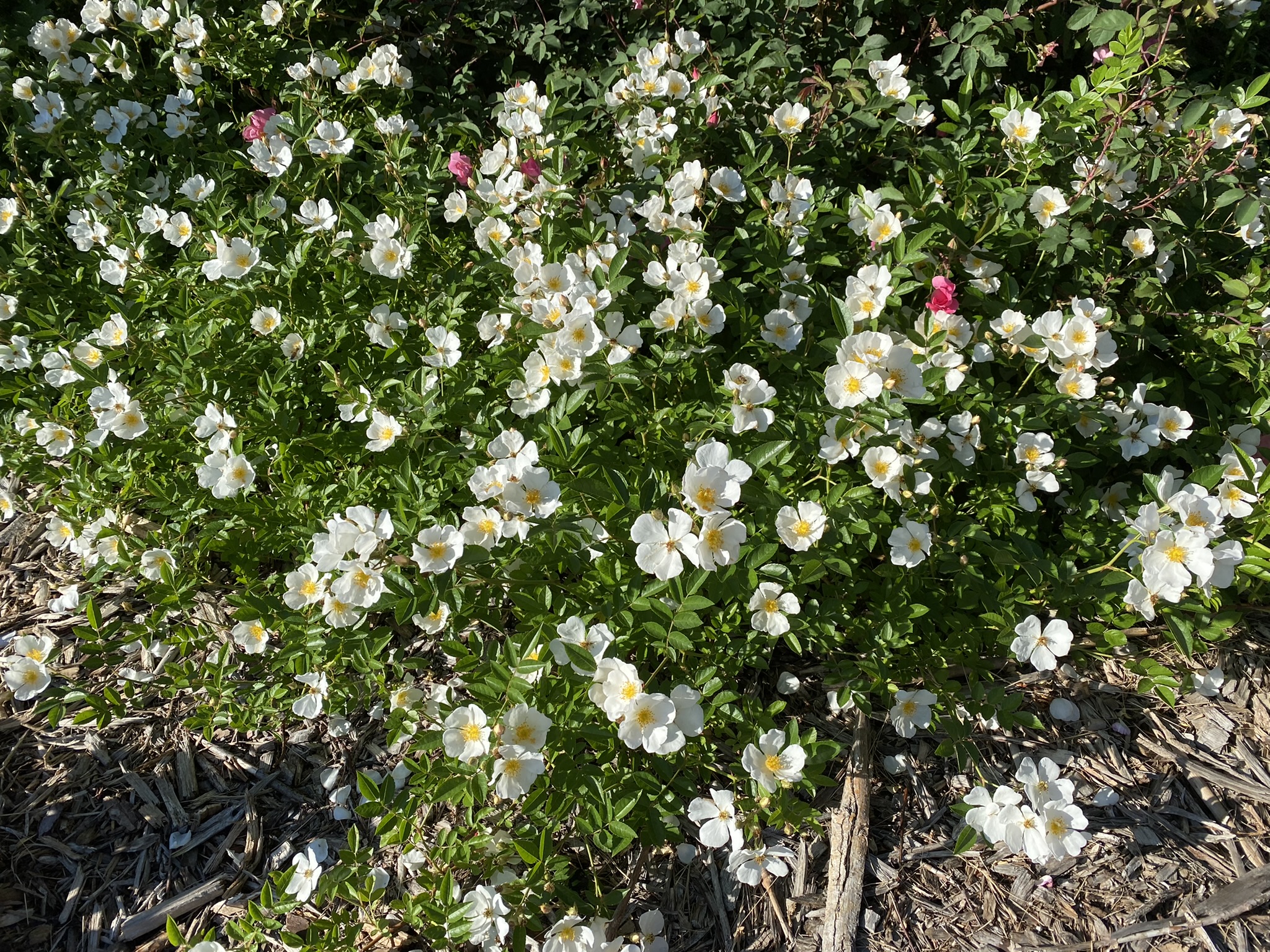 Those look wonderful–it appears that the contribution from the other parents must have tamed R. maximowicziana’s excessive prickles, too. I’ve always wondered what else might have crept into the background of ‘White Mountains’, which most certainly isn’t cane-hardy in zone 4. I’m not sure if its parent ‘Skinner’s Rambler’ still exists anywhere, but it would have been interesting to compare them. It’s unfortunate that there seems to be so little authentic material of R. maximowicziana available in the U.S.; some nurseries were simply selling mislabeled R. luciae (R. wichurana), which is quite different, although both species typically exhibit a relatively prostrate/spreading habit and white flowers.

I didn’t realize the R. max. available for sale isn’t necessarily well documented in terms of being the species itself versus a hybrid. I should propagate and share the very hardy clone I got from Dr. Peter Asher decades ago that came from a Russian Scientist working at a botanical garden in a very cold part of Russia.

Hi David, it’s really good to know about the existence of an extra-hardy clone with a bit of known provenance! The only authentic one I’m familiar with was collected from the wild in a pretty mild part of Russia that is probably a zone 6 area.

The other interesting potential of R. maximowicziana might be some possible resistance to RRD (or maybe more likely, if there’s any truth in it, the mite that transmits RRD). There has been at least anecdotal evidence of resistance of some kind in ‘White Mountains’, which is at least heavily R. maximowicziana-influenced, and I certainly haven’t observed natural infections yet in either that cultivar or in the species.

I just happened on this:

Phytotaxa 428(2): 93-103 (Jan 2020)
Is Rosa x archipelagica (Rosaceae, Rosoideae) really a spontaneous intersectional hybrid between R. rugosa and R. maximowicziana? Molecular data confirmation and evidence of paternal leakage
Schanzer, I.A.; Fedorova, A., V.; Galkina, M.A.; Chubar, E.A.; Rodionov, A., V.; Kotseruba, V.V.
Abstract
Rosa x archipelagica is a spontaneous hybrid between Rosa rugosa and R. maximowicziana distributed, together with its parental taxa, on the coast of a small Stenina Island in the Peter the Great Gulf, the Sea of Japan (Russian Far East). Its hybrid origin is confirmed by direct electropherogram comparisons of PCR products and maximum likelihood analyses of nuclear ITS 1–2 and plastid intergenic spacers trnH–psbA and ndhC–trnV. The plastome markers indicate R. maximowicziana as the maternal genome donor of Rosa x archipelagica, however, one specimen shows also signs of heteroplasmy. This is the first evidence of possible biparental inheritance of plastids in rose hybrids. The results do not show whether the hybrid plants all belong to F1 or further generations of hybrids.

Good news, one of the seedlings of the seeds (polyantha X Rosa maximowicziana)OP has bloomed. I collected pollen and there was a large amount for such a small flower. I don’t quite known what to do with it. I have worked with Ames #5 but that is the closest.

Unfortunately- no pure polyanthas of Pickerings offerings survived in my climate 4A climate for more than 3 years - south gardens. Appears your capturing traits successfully with crossing with full hardy species.

Can vouch for your species observations as in my north garden sample (2 tears old European import “ … of R. max. isn’t super healthy, but is durable and healthy enough to keep going …”. Mine is a tad poorer.

Hit it with chelated iron as looks like rugosa anemia. Nothing to lose … first time tried chelate on some anemia cases. l hope to see before fall a positive effect. 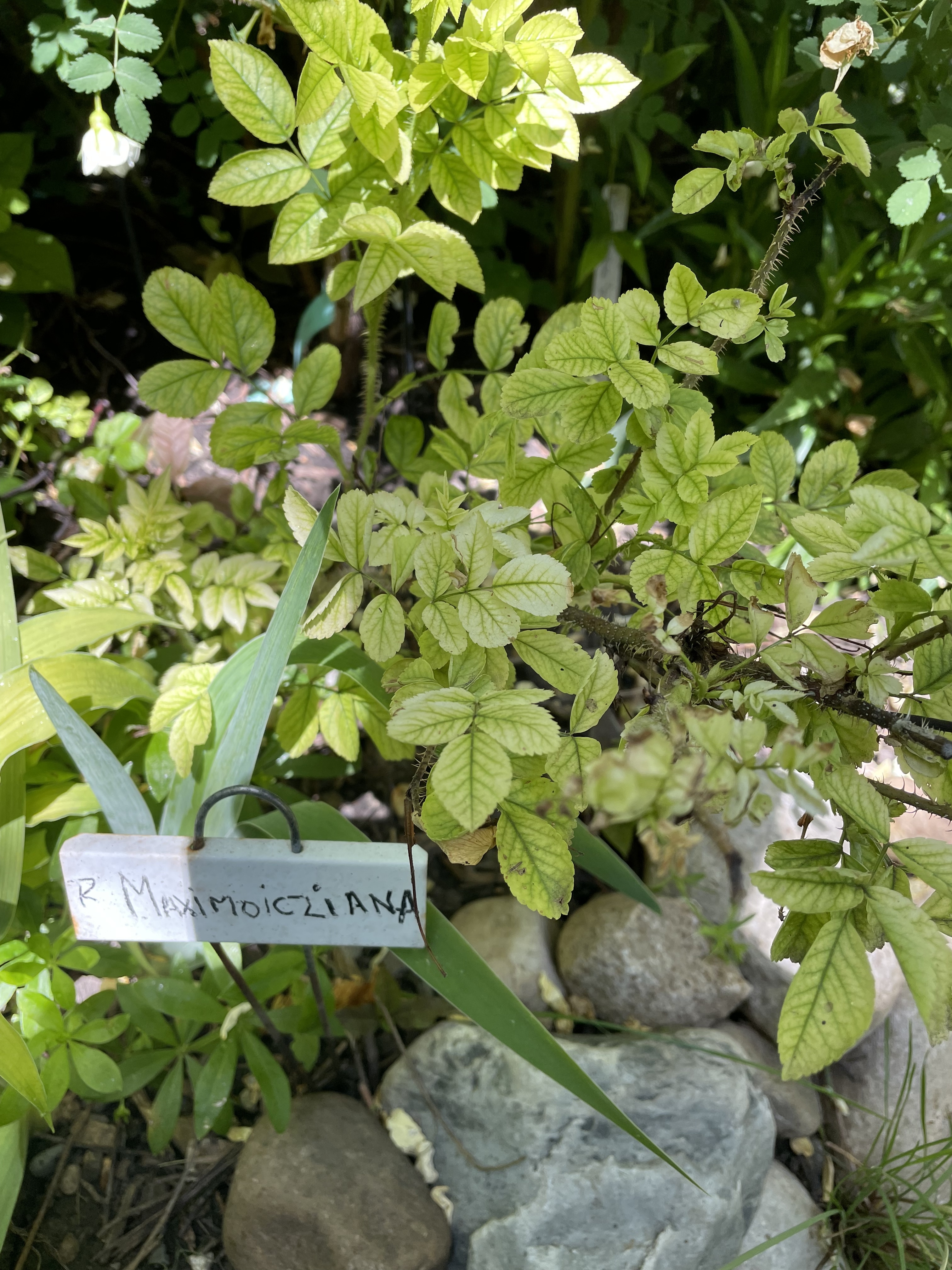 Riku, haver you ever tried Mountain Mignonette? That one is supposed to be hardier than many/most other commercially available polyanthas, and might just be worth a try there. High Country Roses offers it and ships to Canada–I’m not sure if there are other sources.

Reminds of my brief experience with Baby Faurx - one l had hoped would of survived winter. Though refreshing my memory with HMF photos of Faurx leads to bewildering assortment of colors. l remember mine as violet.

I probably wouldn’t call it anything but a fairly ordinary pink color here, but I think you could get improved colors from crossing with certain of your existing hardy varieties anyway. One major value of working with polyanthas can be increased numbers of flowers per cluster and maybe overall flower abundance, but it would definitely help to start with one that is slightly hardier and (maybe) wouldn’t reduce offspring hardiness quite as severely as others. Mountain Mignonette appears to be fertile. Of course, you might also try some of the hardier polyantha types that have come out of Minnesota/the Upper Midwest (David’s “Pretty Polly” series and the University of MN’s releases Ole, Sven, Lena, and Sigrid). I’m not sure about their fertility, but maybe David or someone else might be able to speak to that.

The plastome markers indicate R. maximowicziana as the maternal genome donor of Rosa x archipelagica, however, one specimen shows also signs of heteroplasmy. This is the first evidence of possible biparental inheritance of plastids in rose hybrids. The results do not show whether the hybrid plants all belong to F1 or further generations of hybrids.

I don’t know whether this is directly related, but it’s in the same ball park. Another case of Cinnamomeae and Synstylae swapping hereditary bits, but reverting to their Sectional characteristics.

Soufflet-Freslon et al. Horticulture Research ( 2021) 8:76 Horticulture Research
https://doi.org/10.1038/s41438-021-00512-3 www.nature.com/hortres
Diversity and selection of the continuous-flowering gene, RoKSN, in rose
Soufflet-Freslon et al.
Using sequencing, the A allele of the G181A SNP was found at the heterozygous (16) and homozygous (7) states (Fig. 1 b). Among the seven homozygous accessions, four were scored for their blooming pattern and presented the ability to rebloom late in the season and could be considered as recurrent blooming (Supplementary Fig. 2b). After the first flowering period (in spring), new waves of blooming were observed in summer (mainly for two different individuals of R. fedtschenkoana) or in summer and autumn for ‘Adam Messerich’ and R. moschata (Supplementary Fig. 2b). None of these roses presented the RoKSNcopia or RoKSNLTR allele (Supplementary Table 3) that could explain their ability to rebloom, as previously proposed24 . In addition, this A allele at the homozygous state was found in R. rugosa, as previously shown26. R. rugosa is also a recurrent bloomer. The A allele of the G181A SNP is therefore associated with recurrent blooming. We designated this new allele as RoKSNA181 . The RoKSNA181 allele of R. rugosa and R. moschata may share a single genetic origin. The sequence alignment of a whole RoKSN gene showed that the RoKSNA181 alleles of R. rugosa and R. moschata were 99.8% identical (two SNPs per 1080 bp) and grouped into the same cluster (Supplementary Fig. 4).

Oh, and one more thing. I’ve been wondering about Roxburghs’ Rosa glandulifera, that reportedly bloomed all year. It is currently lumped in with R. moschata, but I can’t find any pictures of it. There are some differences: glands, and biserrate leaves. It may be coincidental, but Rosa luciae f. glandulifera (Koidz.) also reblooms. And I have no pictures of it, either.

hi DavidZ,
i waited until my Maximowicziana seedling was in bloom before commenting on this subject.
I got White Mountains from the MBG many years ago. I crossed it with Iceberg, for no other reason than its the only pollen I had.
This is my only surviving seedling. It survives in my Z3 garden without any special treatment.
It is mildly susceptible to Blackspot.
It doesn’t accept pollen, but set OP seeds.
I’ve successfully used it’s pollen on other roses.
It would be interesting to get a chromosone count on it, since Iceberg is listed on HMF as a triploid.
chuckp 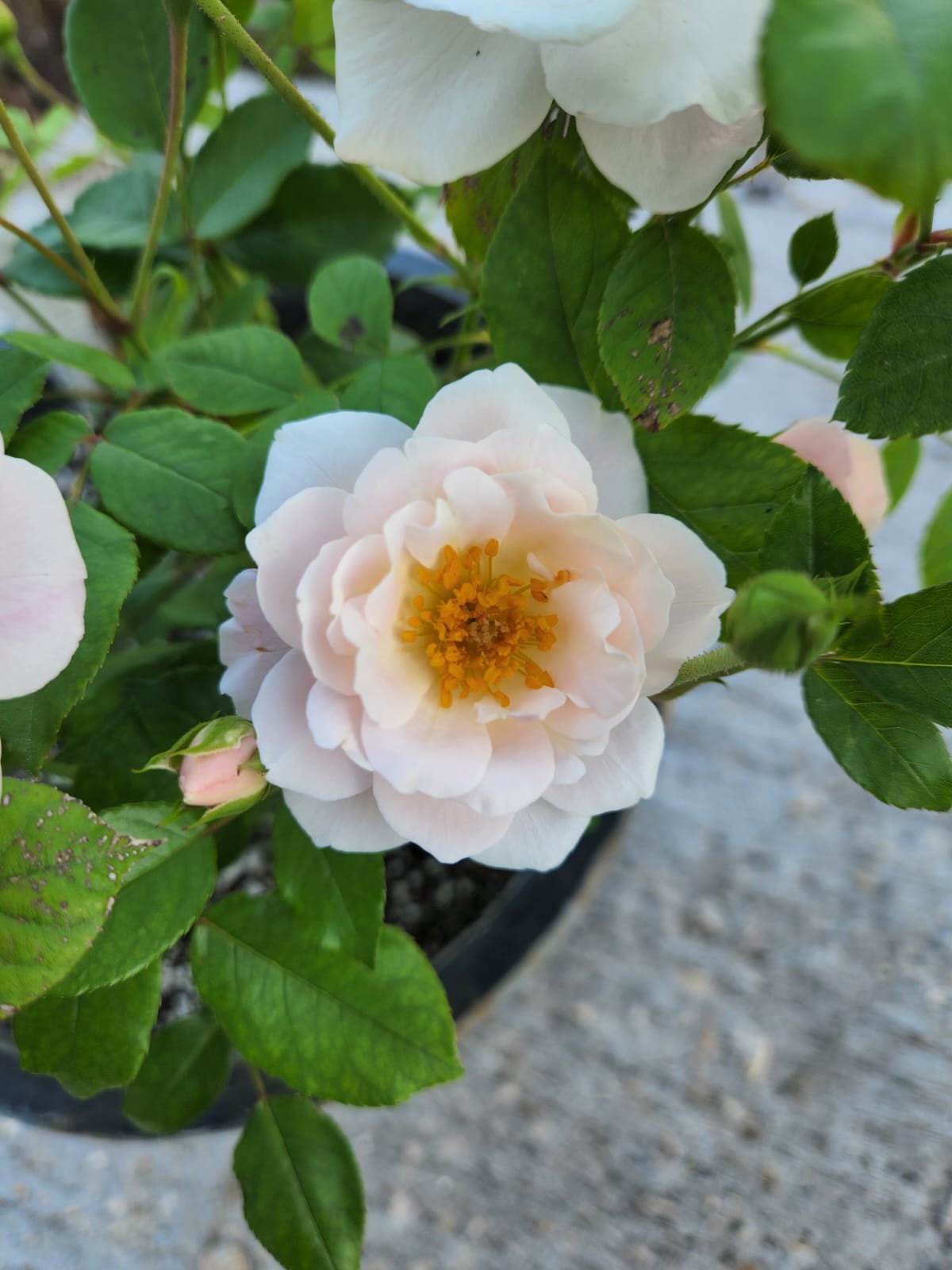 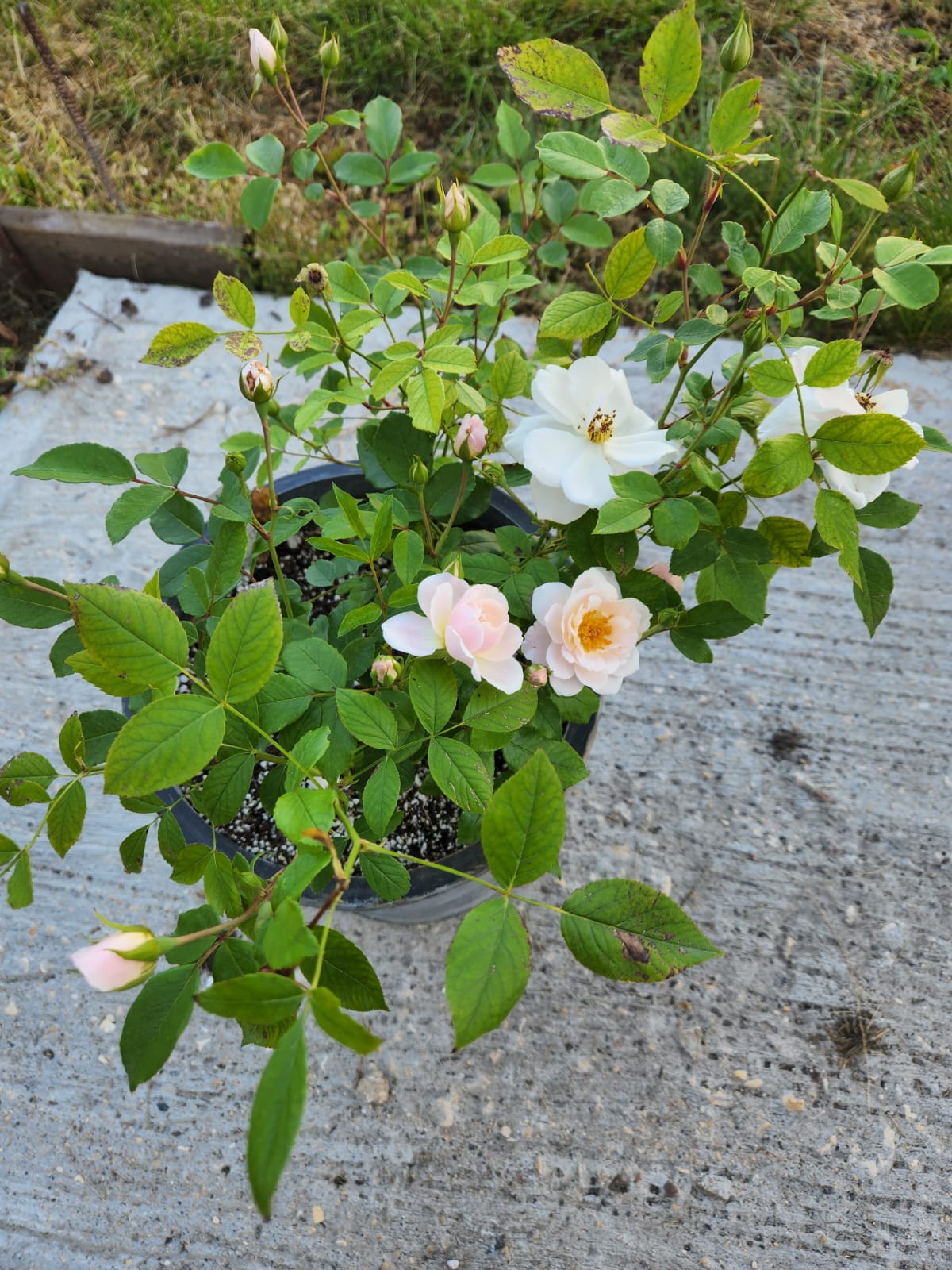 Hi Chuckp! Congratulations!! Wow, it is beautiful. I love the peach color that came through in the opening blooms. It’ll be fun to learn about the diversity you see in its seedlings.