Way back when this forum was set up I copped an image of a rose having multicolor petals to signify read/unread posts. At the time I thought it was simply a figment of some artist’s imagination but I just now stumbled on the real thing, sort of. See page 16.

The trick is how the dye is applied. Can anyone tell me if the dye traverses the xylem or the phloem?

The trick is how the dye is applied. Can anyone tell me if the dye traverses the xylem or the phloem?

When I was a kid, one of my favorite tricks was using food color to give a blue tint to Spiraea x vanhouttei. The kids’ science book suggested splitting a celery stalk from the base part way up, and putting each section in a different color. Nothing so dramatic as a rainbow rose, though.
Karl

Here are some photomicrographs I made in order to see how the tissues of roses were organized. Are there any plant anatomists among us who could help to label the various features? The serial sections are of Royal Highness, the quadrant is of a main stem of Tiffany.

One of the striking features is that the phloem is composed, in part, of hollow tubules running parallel to the stem just below the epidermis. You can see these as tiny ribs when you look really close at the stem of a rose using strong illumination. Presumably these are the vessels that carry sucrose away from the leaves to other parts of the plant. They start out as a double vein each vein running out of opposite sides of a leaf, then a leaf cluster. They maintain a degree of separation as they coalesce with other veins from other leaf clusters then branches and finally the stem.

I suspect that the boxy looking structures interior to these tubules are the xylem elements that would carry the dye upwards to the petals. I have never seen one of these rainbow roses in person but would like to know what dyes they used so I could try the experiment and see how the dyes segregated in cross section.

The main stem shown here of Tiffany has about fifty such distinct phloem and xylem clusters. 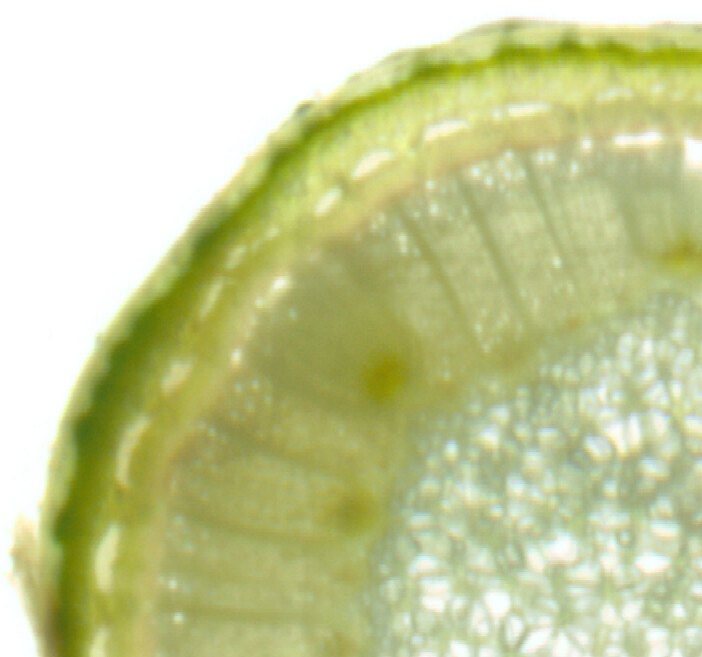 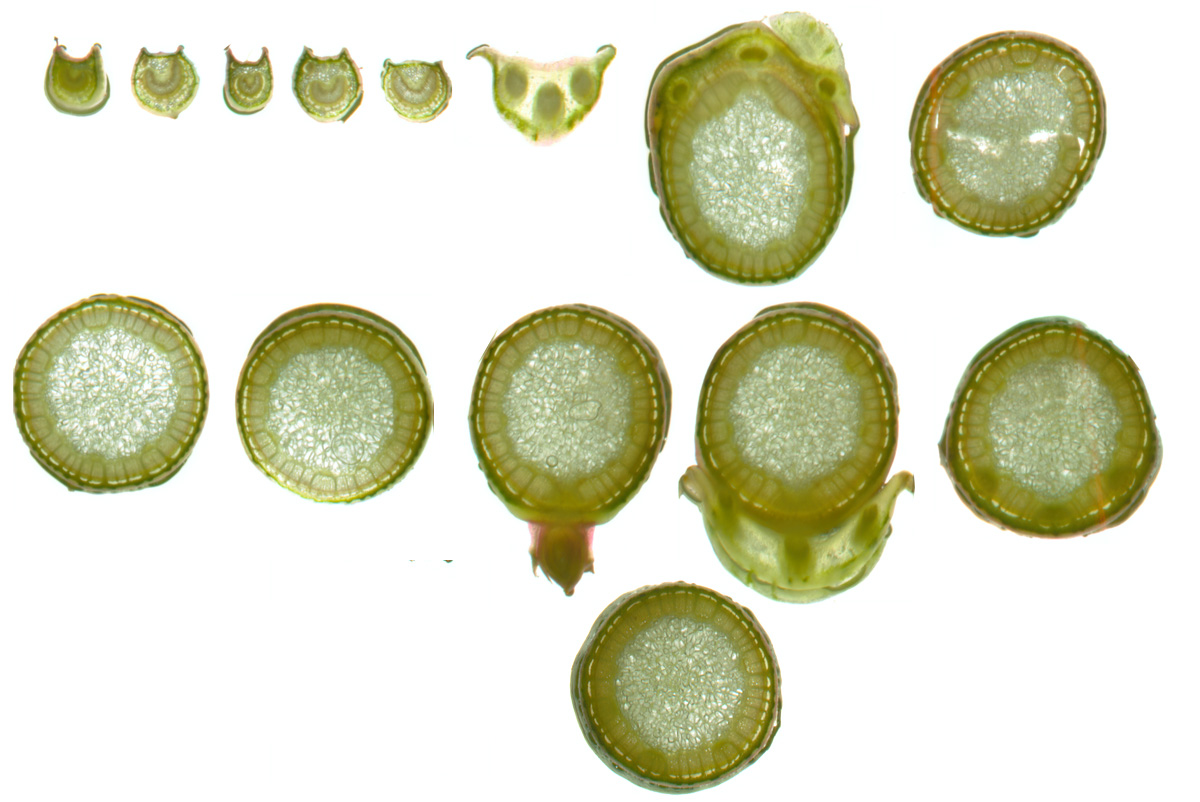 Don,
This arrangement is convenient to humans, because it is possible to cut through the “down” flow (phloem) without disturbing the “up” (xylem). This fact has been exploited to increase yield of fruit trees and grapes, especially the seedless kinds.

It has been found that in order to make the blooms set and secure full yearly crops of grapes the vines must be ringed every year. This ringing consists of making two parallel incisions through the bark and cambium layer around either the trunk, the arms, or the canes of the vines and completely taking out the bark and cambium layer between the two parallel incisions. (Pl. V, fig. 1.) This does not interfere with the upward flow of the sap through the outer ring of undisturbed wood, but where the ringing occurs checks the returning flow while the ringed place is healing. (Pl. V, fig. 2.) The effects of ringing are a full setting of fruit and much larger berries and clusters. (Pl. IV, figs. 1 and 2.) The ringing is done either with a large-bladed pocketknife or with special tools made for the purpose (fig. 3).

Much the same effect can be accomplished by tightly binding the branch.
http://bulbnrose.x10.mx/Heredity/King/Girdling.html

Hmmm. Sounds like risky business. I suspect there is less than a razor’s edge difference between ‘ringing’ and ‘girdling’.

Hmmm. Sounds like risky business. I suspect there is less than a razor’s edge difference between ‘ringing’ and ‘girdling’.

Don,
Terminology varies. I have seen the practice called both “ringing” and “girdling”. It is not a new idea.


Downing: Ringing Fruit Trees (1837)
RINGING (incision annulaire, of the French,) is a well known operation, occasionally performed upon fruit trees, both with a view of inducing fruitfulness, and of hastening the maturation of fruits. The practice is one of very ancient origin, but was revived among the moderns by Du Hamel, who published the result of his very successful experiments in the Memoire de l’Academie des Sciences, for 1778. Since that period it has been in a considerable degree resorted to in England, to force the production of blossom buds on sterile fruit trees, and to hasten the period of ripening of fruit already formed, as well as to increase its size. When practised for the former purpose, the operation must be performed in the spring; but when it is intended that the effect shall be produced upon the fruit of the current year’s growth, the incision should be made when the branch is in flower.

I was thinking of girdling in this context: 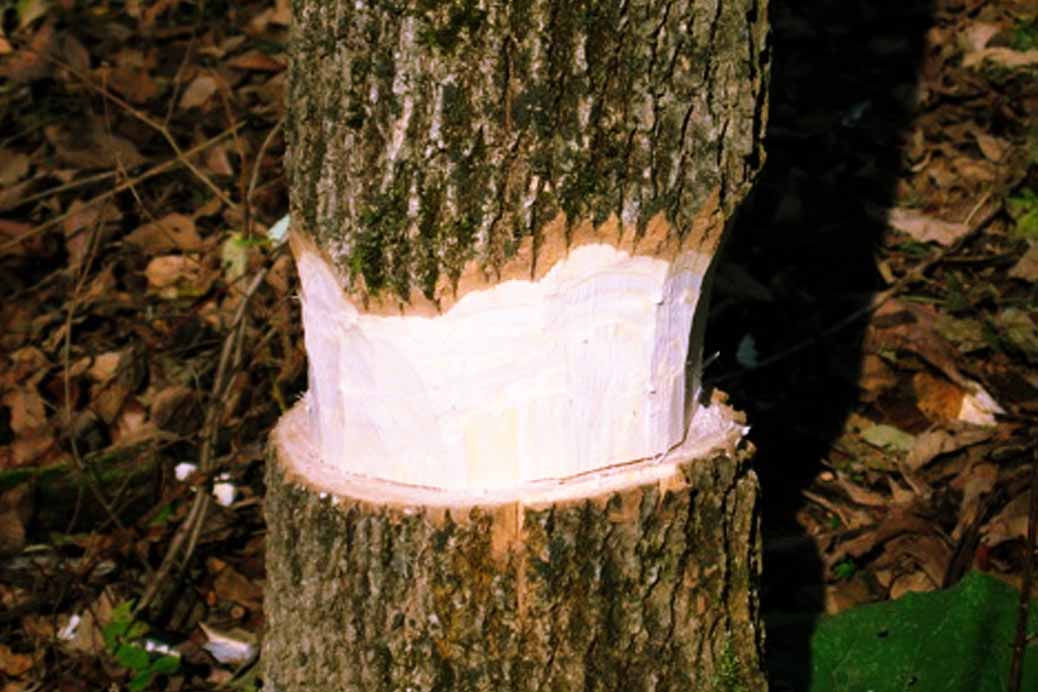 Yes, words are sometimes given more than one meaning.

Another application for disrupting the phloem was devised by Michurin. Most of the carbs were trapped in the upper portion of the pear shoot, which made it more willing (and able) to produce roots. No rooting “hormones” required.
http://bulbnrose.x10.mx/Heredity/Michurin/tube.htm

This paper on rice de-domestication gives another case where suppressing a carbohydrate sink boosts yield - girdling without the trauma. 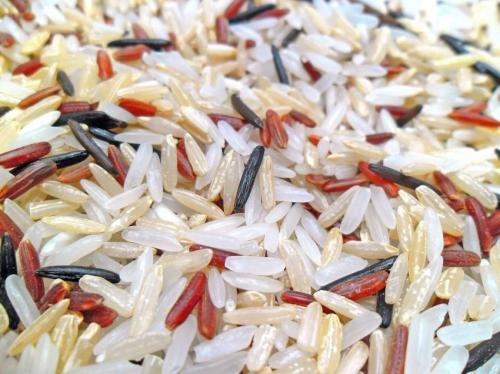 The wild rice consumed by our Neolithic ancestors was very different from the domesticated rice eaten today. Although it is unclear when humans first started farming rice, the oldest paddy fields—in the lower Yangzi River Valley—date back to 4000 BC....

From the article: “To obtain a flower with petals stained in different
colors the stem is vertically cut into four
equal parts and each quarter dipped in a different
dye. The dye moves upwards through the
xylem to the petals, which get a different color
depending on their position in the spiral”
The “spiral” to which this refers is the same spiralling pattern that results in the arrangement of leaves on the stem, or “phyllotaxy” I believe, as well as to the the petals of the flower. This “spiral” results in the staggered distribution of the colors in the bud.

This paper on rice de-domestication gives another case where suppressing a carbohydrate sink boosts yield - girdling without the trauma.

Interesting reading, but not practical for someone trying to persuade a stubborn cultivar to bloom and hold its hips long enough to ripen seeds.

Roberts & Struckmeyer: Vernalization & Photoperiodism (1948) discuss the physiological changes that accompany floral induction. It is instructive to learn that some “short day” plants will refuse to flower if the temperature is too warm.

Poinsettia plants in short days, but too warm at night to initiate blossom, can also be brought into blossom by wrapping taut rubber bands about the stems near the tips. When blossoming is induced in this manner, characteristic changes in the anatomical structure were found to occur above the point of banding.

Related techniques, like cutting a scape from an amaryllis, lily or crinum, can persuade self-incompatible plants to set and ripen seed from their own pollen. In one odd case, Burbank’s very-sterile ‘White Queen’ crinum set a pod packed with seeds. The seeds lacked embryos, but it was still an impressive demonstration.
Karl