In July 2018, I pollinated Rosa Gallica Splendens with Above and Beyond pollen. The seed germinated in May 2019. 14 months after germination, the rose produced the first flower. The flower is pink, fully double and it has an old rosette shape. Probably the rose is quite hardy as Splendens is very winter hardy and Above and Beyond is quite winter hardy here in Northern Finland. 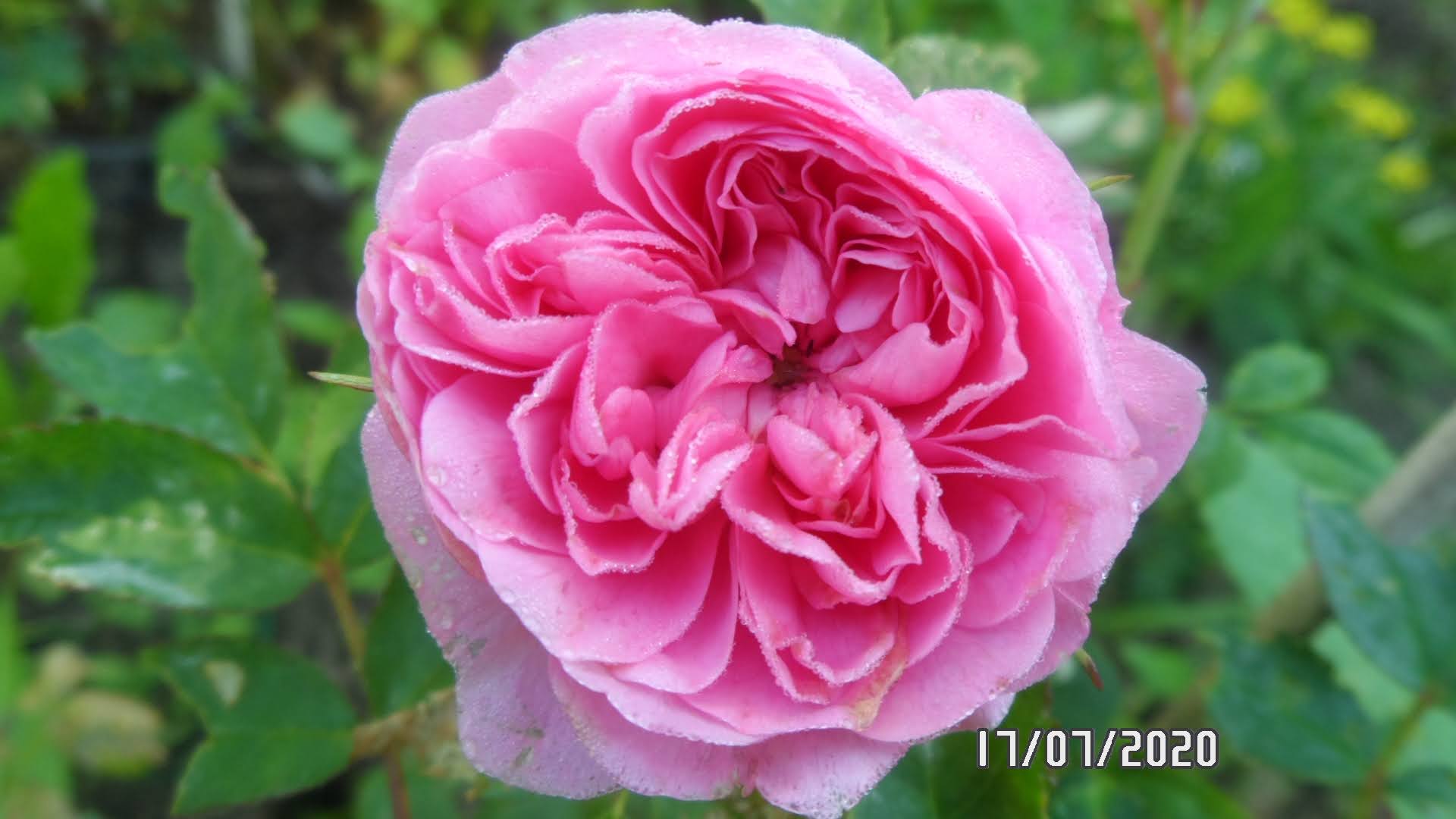 Nice! Thanks for sharing the pic. Should be some extraordinary vigor with that cross.

I think so too. Surprisingly, the rose bloom so soon after germination (14 months), although the Splendens is a once bloomer.

Excellent result and pleasing to the eye.

Also thanks for info on parents as see Dr Z used R. Laxa in A&B. R. Splendens (is) one of few gallicas that can survive in my garden (foothills - Canadian Rockies) and blooming now.

If your cross and A & B live an environment across the lake from aiti’s old hometown then both should make it here.

Thanks. Possibly they would survive.

I live about 25 km south of the city of Oulu (64 ° 48.5′N, 025 ° 25′E) in a place called Liminka. The land is an old seabed. Winters here are cold and long. Spring is cold and summers are often cool and short. I have found that many of the USDA zone 2-2b and some zone 3 plants thrive here in Finnish zone 5. Liminka – Wikipedia

I do all crossings outdoors and I use both fresh and frozen pollen depending on the parents I cross.

Definitely a good trialing ground for hardy … my goal has been to try and “hybridizes” a zone 3 Canadian rambler or climber (red) - so my interest in your success with gallica and R. laxa R… background in parent. Though you are probably aware (lsabelle Skinner) apparently has it and does well in my garden.

Is it too early tell if your success has climber traits ???

One half of my roots on east side mid-way up Lake Päijänne. l immigrated a long time ago from Lahti and lost the language. Covid nuked a paid for trip back this year.

congrats! That is beautiful. I look forward to seeing how it does over the next few years.
Duane

That’s a good goal Riku, because there are hardly any really winter-hardy except Pohjantähti (Polestar). I know Isabella Skinner rose. Unfortunately, it is not available in Europe. Have you used the Ross Rambler rose in your crossings?

True, it is too early because the seedling is still so small, but after a few years I will know more about how it grows.

Sorry to hear that your trip was canceled. Maybe next summer it will be possible.

My goal is winter hardiness, repeated flowering, special colors like peach, salmon pink and different shades of yellow as well as bright red. And of course the climber would be awesome.

Thanks Duane. I will announce how the rose will thrive in the future.

I have not used Ross Rambler# 1 though l grow it. Should really give it a go.

I am still focused on trying to start from Isabelle Skinner because l want R. Laxa Retz. in it. l have not acquired a R. Laxa Retz… Hence trying IS. Going to fix the lack RlR in garden inventory real soon. If hybridizing successful … 0 so far … that should give a clear provenance right back to species source and proof hardy in my zone, my garden. Then l retire from hybridizing and go fishing.

Another hardy parent option, has to be male as wont set hips for me, is Agatha. In my garden it has my rating of “super hardy” … growing two since 2007 and canes exceed 7-8 feet.
Dare l exaggerate, one cane sure looks like a canes hits 8-10 feet - loose mixed pink bloom.

As an aside, this year been pollinating a lot my Morden 1610’s with super hardy, spino pollen (and vise versa). This Morden is not hardy in my garden (good for zone 3a-4a short shrub landscaping needs), but has excellent climbing traits, and clear dark red to my eye, single blooms.

I have a couple of his efforts l don’t gripe about, especially Prairie Dawn which gives copious pink blooms (some weak second pseudo rebloom, tall stature for back of one of the gardens, and spino hardy … just aggressively prune to 3-5 canes to keep it in check.

Been pollinating it with 6910 and Alika. Has RRambler, spino and Prairie Youth in background so good candidate to try for true hardy climber using a toss of the dice.

I thought its genes could have potential. The original RR grows to 20 feet high and is winter hardy in Zone 2a. I also have RR1. I planted it last fall. I have a 25 year old glauca hybrid Nova. It has RR genes inherited and has grown to almost 12 feet in height. Agatha is winter hardy because it is a cinnamomea - gallica hybrid. Agatha grows a lot in Finland in old cemeteries. That is why it is called the church rose. Agatha was involved in the Finnish rose breeding project, but the results were not satisfactory. Maybe Agatha just needs the right partner.

I have also done a few spinosissima crosses . For example Suzanne x Above and Beyond and Grandiflora x Prairie Peace. I have a few seedlings growing from that first cross. The latter I pollinated about three weeks ago. Grandiflora is very hardy spinosissima and it grows 6-8 feet tall. The flowers are four inches wide an have 5-8 petals. The buds are pale yellow and the color of the flower is white. Grandiflora blooms repeatedly, opening individual flowers after the main flowering until fall. Prairie Dawn you mentioned is the seed parent of glauca Nova.

Good luck and success to your efforts.

Thanks Hannu for the hybridizing info and growing experience for a number of examples.

Value all of it, and finally great to get feedback on Agatha from another northern country, and the difficulty in using it. Been wondering why it was not used more, do grow an apparently related (debated) Empress Josephine. Doubt related by much, not hardy at all, and protected in winter - in a good year puts on a good show. - this year recovering.

One more tip. Pirkko Kahila from the Finnish rose breeding project said that John Davis x Splendens will give interesting offspring already in the F1 generation.

Txs for tip … unfortunately, if you can believe it or not, John Davies seems to not like my garden after repeated failures to survive winter. For others in zone 3a - 4 a CDN no problem and some cane remains. Frobisher and Baffin make it through with cane damage.

However with rosa gallicas, Dr. Merkeley, Alika, Ruth, Agatha, Splendens, Macrantha (various spellings?) and Officinalis will have acceptable performance with last two having a bit tenuous winter survival. The rest of my gallicas l cover in peat moss.

Hope there hardy - new this year.

Here is non bloom photo of the new Tove Jansson.

The red in background is a great British rugosa hybrid named “Hunter”. Not cane hardy, but comes back strongly to bloom and earned its place in the gardens for 17 years. 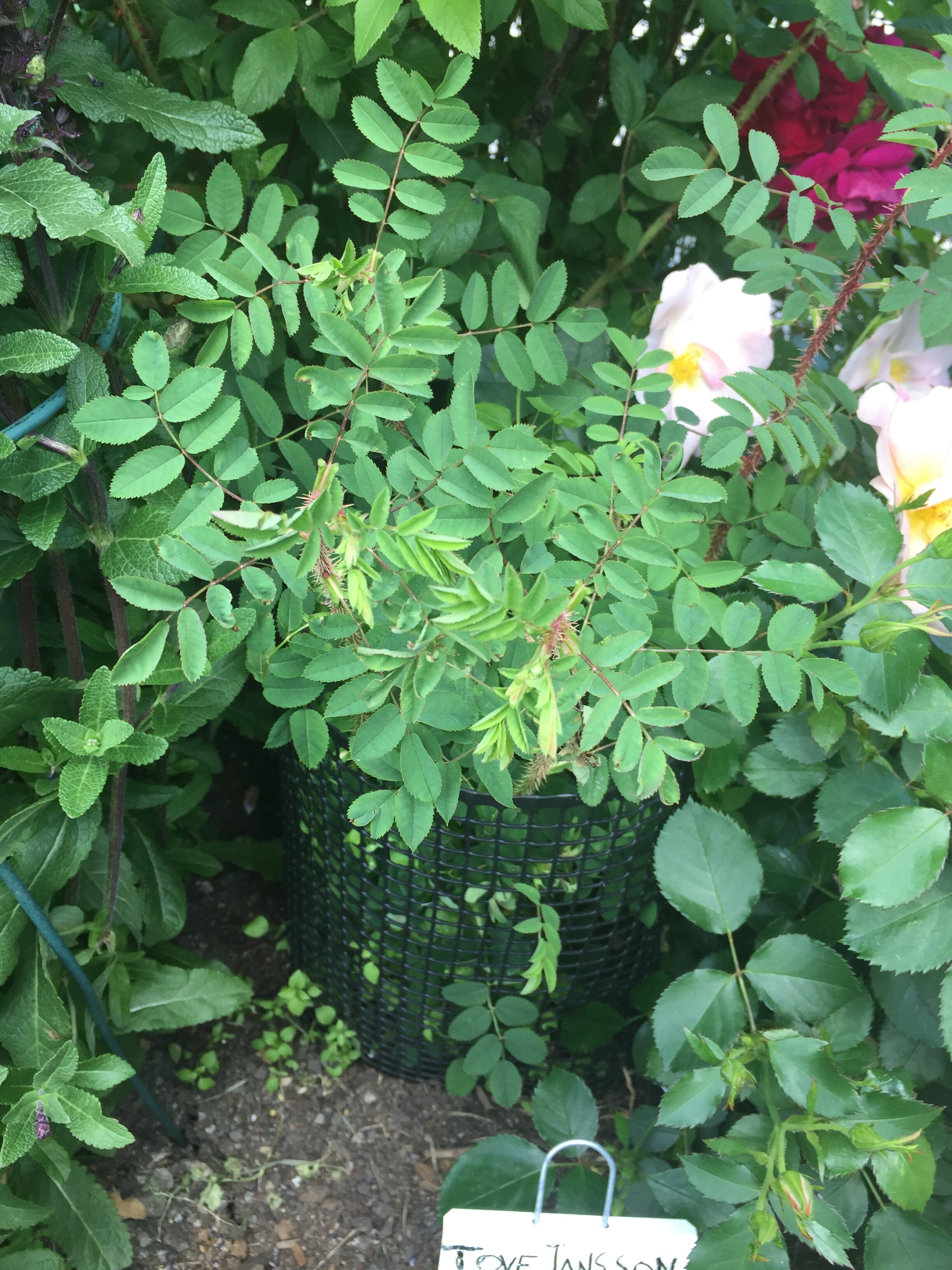 John Davis is problematic here too. It will never become a big bush. That’s why I use it as a pollinator as well as the John Cabot rose.

Chinook Sunrise seems to be a complex hybrid. How winter-hardy has it been and is it worth of breeding purpose?

Chinook Sunrise has only been in garden for one winter. I was cautious with them and covered them with peat moss.

l can not comment on winter hardiness other than to say canes above peat moss had to be pruned. Growth this summer is still slow ( year 2 in garden) but excellent, and leaves clean (my garden has very low disease pressure).

Bloom color has been disappointing for 2 seasons for a “apricot blend”, single. Tends to a washed out pale or light pastel version, though the bud leads one to think it will be deeper - my intense “apricot” colour standards are Olds College Centennial, first bloom (later in season orange) and Prairie Peace.

Forgot about John Cabot, its a main stay planting in the front garden and has never disappointed and recovers vigorously from winter die back. Used it as an excellent seed parent but nothing yet worth mentioning - still go to Red Dawn x Suzanne, Suzanne and the spinos for the most part. My last Red Dawn is not hardy here and has only survived ( bloomed this year) because blanketed under 18 inches of peat moss.
Jens Munk’ rugosa genes make a strong statement and is an excellent non-issue explorer rose - about the only one in my experience.

Canadian prairie hybridizers need to breed a garden worthy, super hardy Canadian rose and name it Samuel Hearne as he was the first European that went to the Canadian “artic” exploring on land and lived to tell about it. Personally l believe it was Leif Erickson. Candidates for naming my first super hardy if it comes about.

You given food for thought as both R. cinnamomea as plena and R. pendinula are hardy in the back north gardens for years (the tough growing conditions garden).

And also for next springs import under my non-commercial CFIA license l see more Finn roses coming over … plus a token try again at Ran. I am redoing a large part of the back to reduce repeats. Can only import from one southern Scandinavian country as only country that made approved government list.

How do Helenae hybrids do in Finland?

I imported hybrida, lykkefund, starkodder and red robin this year. Planted in an optimal conditions test bed ( and will be covered for first winter) as El Ariana moved to recovery (12 years of testing) lower canes bloomed but tall ones do not make it through winter). Growing well before first winter arrives.

Planted Ran but rabbits eat it. A young Patricia Macoun survived and plant donated to a Canadian grower.