Here is a video I just edited, shot this summer, about breeding with R. carolina/virginiana. I noticed that I had a video about the FIVI3 seedlings posted last year, which might be relevant: Fun videos, Joe. I had a bunch of comments I wanted to post after seeing them yesterday evening but I was unable to get on the Forum after viewing your videos. Did anybody else have any issues with this site?

Fun videos, Joe. I had a bunch of comments I wanted to post after seeing them yesterday evening but I was unable to get on the Forum after viewing your videos. Did anybody else have any issues with this site?

Yes, there was a sporadic issue where the pages wouldn’t load but then refreshing it worked until the next page would fail.

Yes both yesterday for mobile then today for desk top - both cleared up - never seen the no service access message format like that before.

Great video! thanks for sharing it. Good to see several generations to see the possibilities, as well as the dead ends. Now you are causing me to think I need to add another line in my breeding program.
Duane

You mentioned fragrance on several of your (F2?). Is this a line you would recommend for keeping fragance into more cold hardy roses? Is there a different recommendation you would have, regarding developing a line from perhaps a different species for fragrance and cold hardiness?
Thanks!
Duane

The server encountered an internal error or misconfiguration and was unable to complete your request.

Please contact the server administrator at webmaster@rosebreeders.org to inform them of the time this error occurred, and the actions you performed just before this error.

More information about this error may be available in the server error log.

Additionally, a 500 Internal Server Error error was encountered while trying to use an ErrorDocument to handle the request.”

Joe, you are truly a master hybridizer. These f1 and f2 hybrids are really powerful results with the potential to bring the health and vigor that is so much needed in modern roses.

So I got to wondering about other successful interspecies and multispecies hybrids and came across an on old abstract from Nature referencing apomixis, in relation pear and apple crosses with the curious mention of the use of β-naphthoxy-acetic acid (NAA) on the crosses before and after.

Does anyone know the purpose of this? NAA is a plant growth regulator usually used in combination with kinetin, BA and gibberellin in plant tissue culture but I don’t see why it might be useful in cross species hybrids.

Thanks, Don! I’ll radiate a temporary ego glow from that. I hope I can bring the dream of hardy, healthy, and lovely roses closer to reality.

Duane, regarding fragrance, I don’t have any particular insights about how fragrance gets passed on from one species or another. A lot of species seem to have a nice wild rose fragrance, and I think it would be fun to blend that sweetness with the fruity element of some orange-yellow roses or the tea-like depth of a hybrid tea. Fragrance always seems like an unexpected bonus to me. I think it’s a numbers game as with health or any other characteristic…we just have to use fragrant parents and select for fragrant seedlings. I think I’ll start a fragrance thread for discussion!

Joe, I really envy you your property and, more the point, your dedication to your craft! Really cool stuff!

Your woodsii seedlings are impressive. I have seen the (presumed) subspecies fendleri/arizonica in New Mexico get rather large, but saw native R.w.ultramontana in CO that didn’t top 18". I had assumed a lot of that was cold-related, but I would think your climate is more akin to that of the ultramontana’s range. (The CO plants I saw were relatively sheltered around the edge of a lake, but then, relatively high altitude I suppose.) Pretty exciting for me to see those as I have some seedlings from the species coming along. I love the cooler-colored matte foliage and bright hips.

I’ve really wanted to play with the virginiana and carolina roses. I shudder to think what some of your R.carolina hybrids would do in warmer climates though! LOL. 8+ feet per year? Those are quite impressive.

Buck was several generations from Suzanne before creating anything with which we are familiar. I wouldn’t be too hard on your crosses between her and a species rose. (I would guess anything modern is going to be highly diluted, with results that are perhaps akin to working with a species again.) Have you done many Suzanne-with-modern crosses? I wonder if aiming for increased hardiness with modern aspects(form and foliage) via that route, and then crossing with a virginiana-with-modern cross might be a viable way to mix those genetics, but I have no idea as to what routes are the more tried and true… If one could get a warm-toned Suzanne/Lemon Fizz offspring to cross with FIVI3, for instance, and acquire a repeating cold-hardy, yellow toned rose, that, I imagine, would really be an achievement.

Have you noted any differences in hardiness b/w offspring of virginiana and carolina? I don’t know the provenance of your stock, but I tend to think of there being a pretty soft line between the two species, with one being a more norther (sub?)species than the other. Also, in one of your videos you are working with Rainbow K.O… I’ve read of others using it a too. I picked one up off a clearance rack, and I’m somewhat underwhelmed with it thus far. I’ve wondered if it actually has much more to offer as a parent than e.g. the parent re-branded as Coral K.O., formerly Carefree Celebration. (I don’t have Carefree Celebration, and there is only one HMF user review, though the reviewer thinks more highly of CC than most do of R.KO.) I only ask as I see a number of references to folks using it as a parent, and wonder if folks have found more to it than I am seeing.

Love the FIVI3 babies. Have you tried a Lemon Fizz x virginiana? (The reported relative hardiness and disease-resistance of LF is why I’m asking. No idea if the flower power or color retention is comparable, but I’m a Kordes fan, and that cross has been on my hypothetical list if/when I acquire r. carolina.)

Thanks so much for taking the time to share! Awesome operation you’ve got going there! (Can I borrow an acre and a pound of your gusto? LOL)

Thanks for creating and sharing. (Please pardon all my questions and thoughts!)

That is a great video of great plants. I wonder if fertility and soil tilth plays a role in the difference between woodsii in CO and MN? Some sedimentary sandy soils are phenomenal for nursery stock. Here in town daylilies grow twice as fast in a fine silt loam of a community garden as they do up on the clay soils in higher (50-100 ft) elevation, for the same breeder. My woodsii from WY in partial shade isn’t any bigger than it was in Lander area so maybe it is mainly genetics of hybridity, not soil.

ON Rainbow K.O. I am a fan for a petal that holds, sometimes too long and turning green. Also for disease resistance, ability to yield strong dark reds but also yellows, and decent winter hardiness. How hardy I can’t say as we just don’t get below zero much any more. Its pollen works on tetraploids, probably diploids too, and triploids like Dr Huey or New Dawn.

The tendency of Suzanne and other spin hybrids to significantly defoliate, combined with their extreme thorniness, gives rise to prejudice in me. While carolina and virginiana don’t have as extreme hardiness, their healthy, modern foliage and vigor make them more valuable parents in my opinion. Both the spin path and the carolina/virginiana path are introducing tetraploid non-reblooming genetics, so one has to pick a path and stick with it to get rebloom.

If I did go down the spin path, maybe Prairie Peace would be a better option. It seems to mix decently with modern genes, and has yellow in it.

I have zero confidence in the “trueness” of my species carolina and virginiana. They’re just so similar, and I envision Lawyer Nursery with patch of each growing close together (with bees flying to and fro), from which they collect seed.

Regarding Lemon Fizz…not sure if you caught it, but one of the seedlings towards the end of the first video is (LF x R. carolina) x Yellow Brick Road. I was pleasantly surprised when the LF x carolina seedling bloomed and was yellow. It had a coarse, ultra-vigorous, growth and only a handful of blossoms each year. It started getting cercospora. I was disheartened with my valiant but failed efforts to recover rebloom from FIVI3, so I pimped some pollen and grubbed it out. (maybe thistles had something to do with that decision as well). I kind of wish I had it back now that I saw several reblooming seedlings from putting its pollen on YBR. (YBR is good at selfing, so there is still a chance these are selfs, but I think I see some carolina influence.) 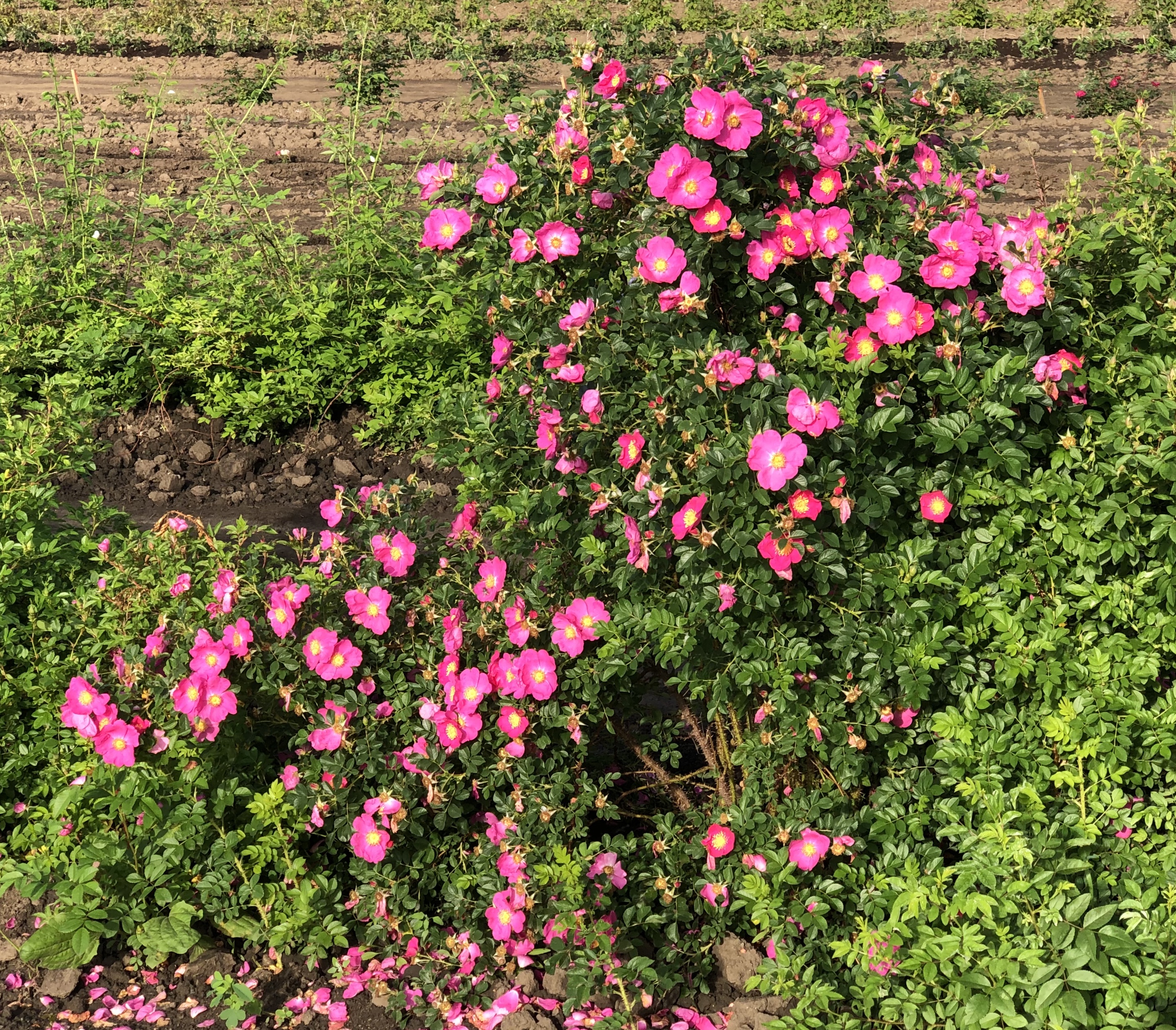 Pretty exciting for me to see those as I have some seedlings from the species coming along. I love the cooler-colored matte foliage and bright hips.

I got woodsii seed from sheffields seed. Sown March (autumn/fall here) and they are around 2 foot tall now, most of that growth being in the last 3 months (spring). Blue matte foilage and all, no disease issues. So is possibly a valid source of seed if anyone is interested.

Just other random observations from their seed.

Blanda doesnt want to live here and of the very few (maybe 3 out of 100+) remaining the largest has patches of powdery mildew.

Palustris seed has been a mixed bag, the species may just be variable but theres three distinctly different foliage types. All narrrow like palustris but, matte, fuzzy, low shine.

Great videos Joe with some very interesting information. I always like seeing what you’ve been up to.

Joe, I think you meant to address those last two to me. I was the one pestering with questions and unsolicited suggestions (relative lack of experience notwithstanding) and Larry was the one graciously addressing some of my unsolicited thoughts.

I’ve always wondered why woodsii hasn’t appeared in more crosses in view of its exceptional qualities (IMO) and its expansive range (potential adaptability). I’m glad to see folks playing with it. No doubt it will be a long haul to get anything out of it. I don’t recall if the seedling I am growing is from the CO lot, or from NM, but isn’t yet showing vigor, still in its small pot in the filtered light of the back yard.

Joe, have you worked with Sunny Sky yet? It obviously doesn’t have the saturation of LF, but is a very nice and fertile HT-form Kordes with disease-resistance on par with LF. Pierre in France was using it and singing its praises, and Kordes too has introduced seedlings from it (e.g. Orangerie – an ADR award winner like its momma.)