Came across a Tantau cultivar, “Strandperle Norderney” Rose Strandperle Amrum online kaufen | Rosen Tantau an apparent rugosa hybrid which reminds of some foliolosa descendants. I was trying to think of other purple-stamened roses (Burgundy Iceberg, perhaps the moyesii “Geranium”, and i was going to say, Astronomia/The Charlatan until I realized its are deep pink and not purple…)

I was wondering of folks could think of roses having such, and/or speculate as to how such come about in descendants?

You can find a number with intensely dark stamen in the Hulthemia types. The pigments concentrated in the central disk of the flower and continue up the stamen.

I saw Bayses Purple a number of years ago in the outside patio garden at the US Botanical Garden. The stamens were strikingly purple.

Basye’s Purple, and Paul Barden’s ‘Purple Folio-Chief’ were the two foliolosa descendants I was thinking of when I alluded to such. I don’t know if there are others. Looking again now, I see that Ann Endt does not have purple stamens, as I thought I had recalled. In fact, I am finding surprisingly few as I look at roses I thought I remembered as having purple stamens…

Kim, are there hulthemias with purple anthers as well? The very few I can think of off-hand seem to have yellow anthers, though with colored filaments. (I don’t know if I was clear, or even misusing my botanical terms, but I meant “stamen” to include both anther and filament.) As I say, I know very few from this class.

I don’t know if others find such remarkable, but the few times I’ve seen purple stamens, I’ve found them quite striking. Apparently I’ve only seen such on three cultivars now that I’m doing searches!

Years ago I raised selfed seedlings of Carefree Beauty (only rose in the landscape with no other roses anywhere nearby) and a limited number of seedlings had purple/pink filaments and anther edges. It seems like at least the kind of stamen coloration that CB gives in this regard is recessive. CB does not have this trait, but seems to be a carrier.

Rotes Phänomen, a rugosa hybrid, I believe, has purple stamens. But no descendants yet.

Purple is not the only color that anthers can be besides yellow. This is a picture of Rob Rippeto’s GOLDAXDORHOR, a hybrid bracteata seedling that I tried breeding with for several years. I regret not having any offspring that survived the winters in New England which was the fate also of mama. 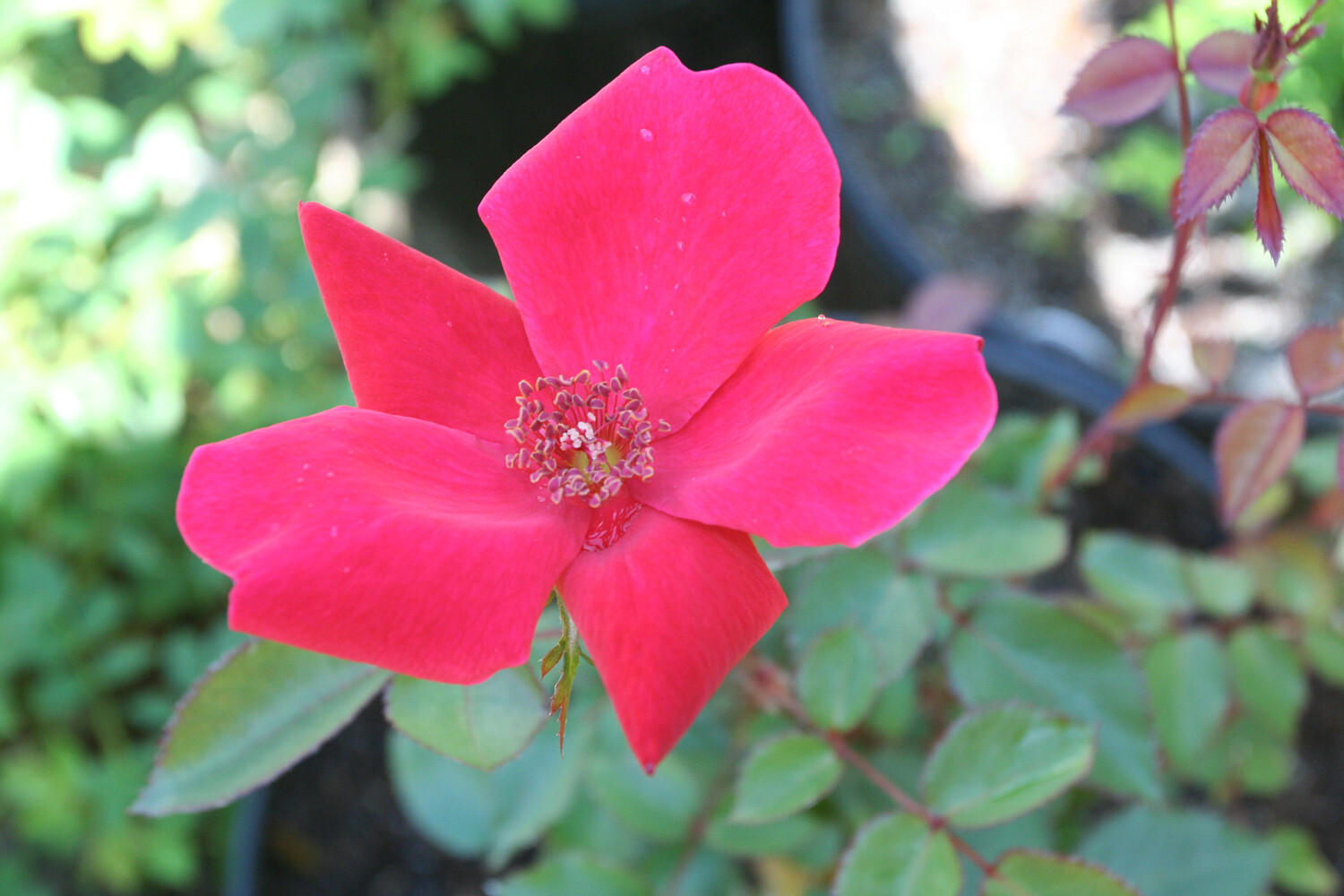 There are many with red stamen. Think Dainty Bess and White Wings to name just two.

Kim, are there hulthemias with purple anthers as well? The very few I can think of off-hand seem to have yellow anthers, though with colored filaments.

They can be, but Im seeing more red/dark red. I’ve raised a lot of seedlings from Sweet Spot Calypso (a lot of health issues though) and it varies from entirely yellow reproductive parts to entirely red with a lot of inbetween.

Kim, it occurred to me to search purple stamens in this forum (duh) and came across a brief exchange b/w you and Jim on the subject of his hulthemias. I likewise followed the link to Jim’s “baby Dainty Bess” (No idea why I had forgotten Dainty Bess beforehand.) Also found a mention of David’s Carefree Beauty seedling…

Interestingly enough, I’m not finding any sort of explanation for the trait in the pedigrees. I gather such are pretty few and far between, rather random, and not something one should plan for in crossing.

I am expecting upwards of 100 OP C.B. seedlings. I would guess I have 50 of them in little pots so far, and many more seeds in the cooler. I’ll be curious as to whether any of them have purple stamens. (Growing them more as a germination experiment than anything else. I was underwhelmed with my CB seedlings last year, and I expect the vast majority of these will probably be culled for health issues before they bloom. They’d better be. I ain’t got that kind of room for plants… (Meanwhile, I probably collected no more than a half dozen successful takes on my planned crosses. I really resent the bees for making me feel so inept.)) 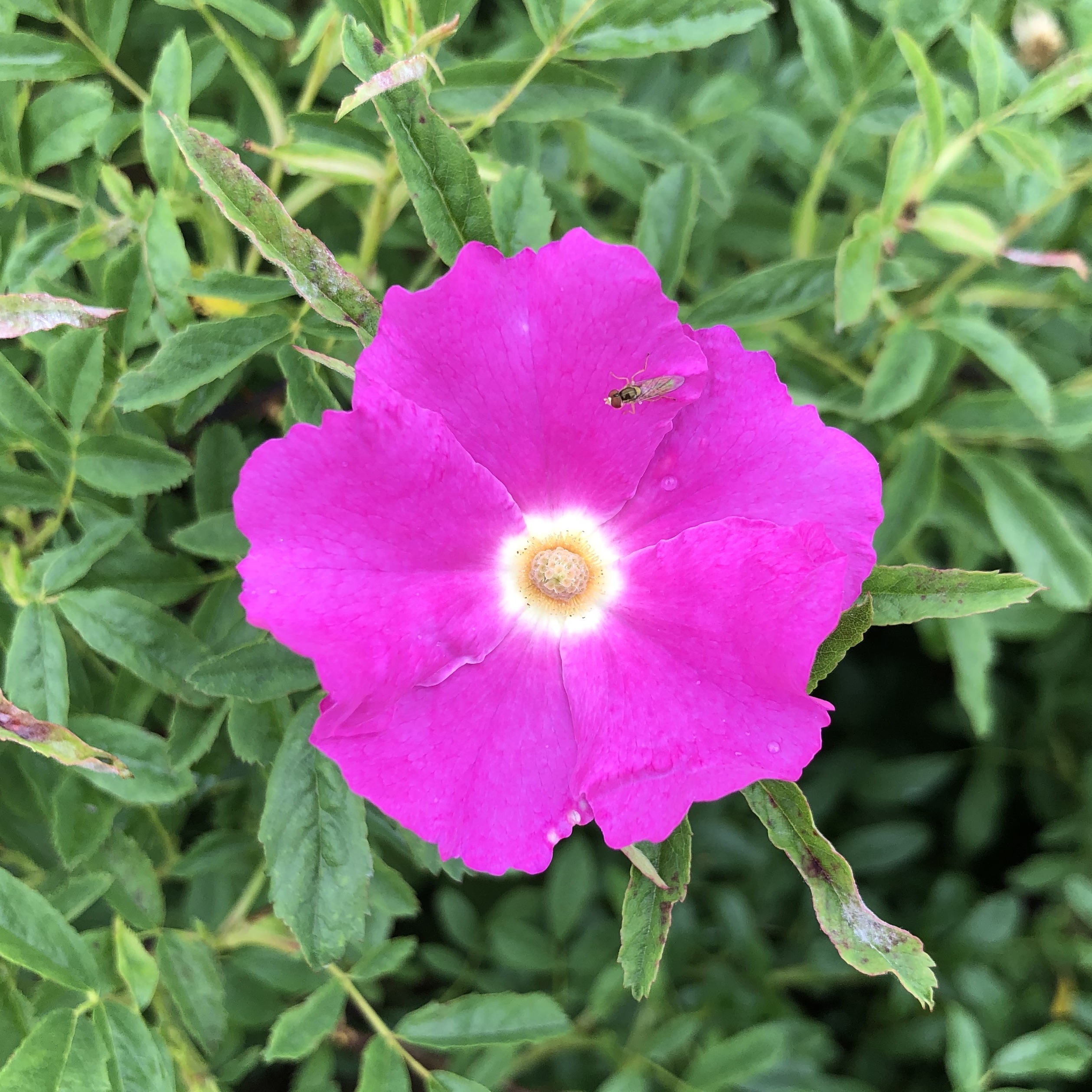 Joe, they are great. I do hope you have yellows in the plants you have not shown us, “please”

Beautiful, Joe. I like those contrasting centers, but the dark stamens in particular seem to draw me.
In view of my attraction to dark centers, I’m really not sure why I have yet to try any hulthemias. (Though I have always presumed they would resent my humidity.)

I grew a seedling from my first Hulthemia hybrid crossed with Home Run. Deep dark stamens but sadly a very poor bloomer and a weak plant. Haven’t made something similar again. 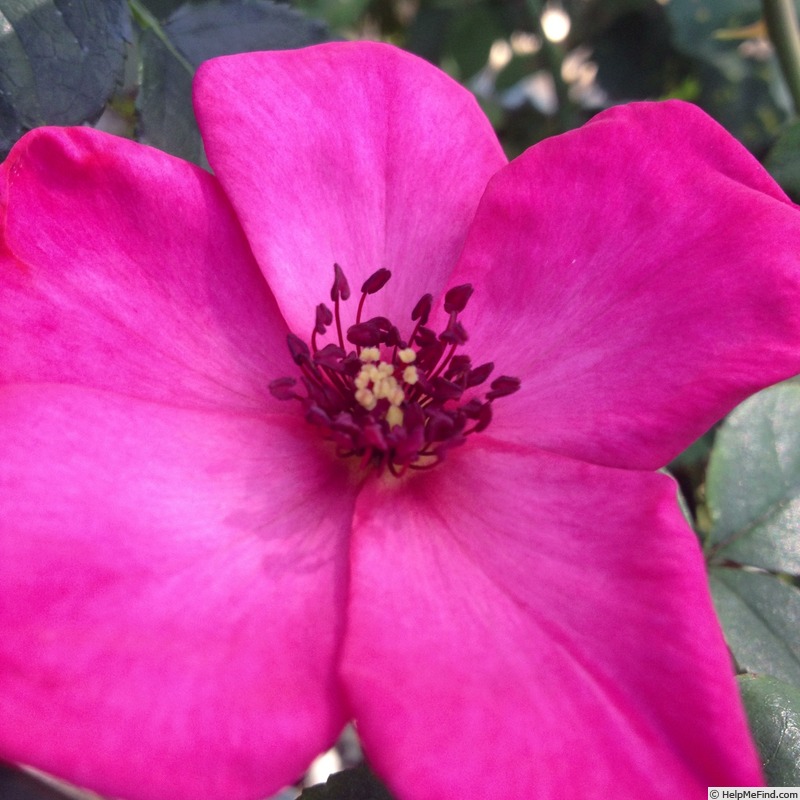 Another rose that I used in the past with darker filaments was ‘Geisha’. It was a nice rose and set hips too!

This is a rose hybridized by my friend Al Whitcomb. Filaments can be very dark - definitely maroon if not purple. Named ‘Miss Grace.’
Stephen 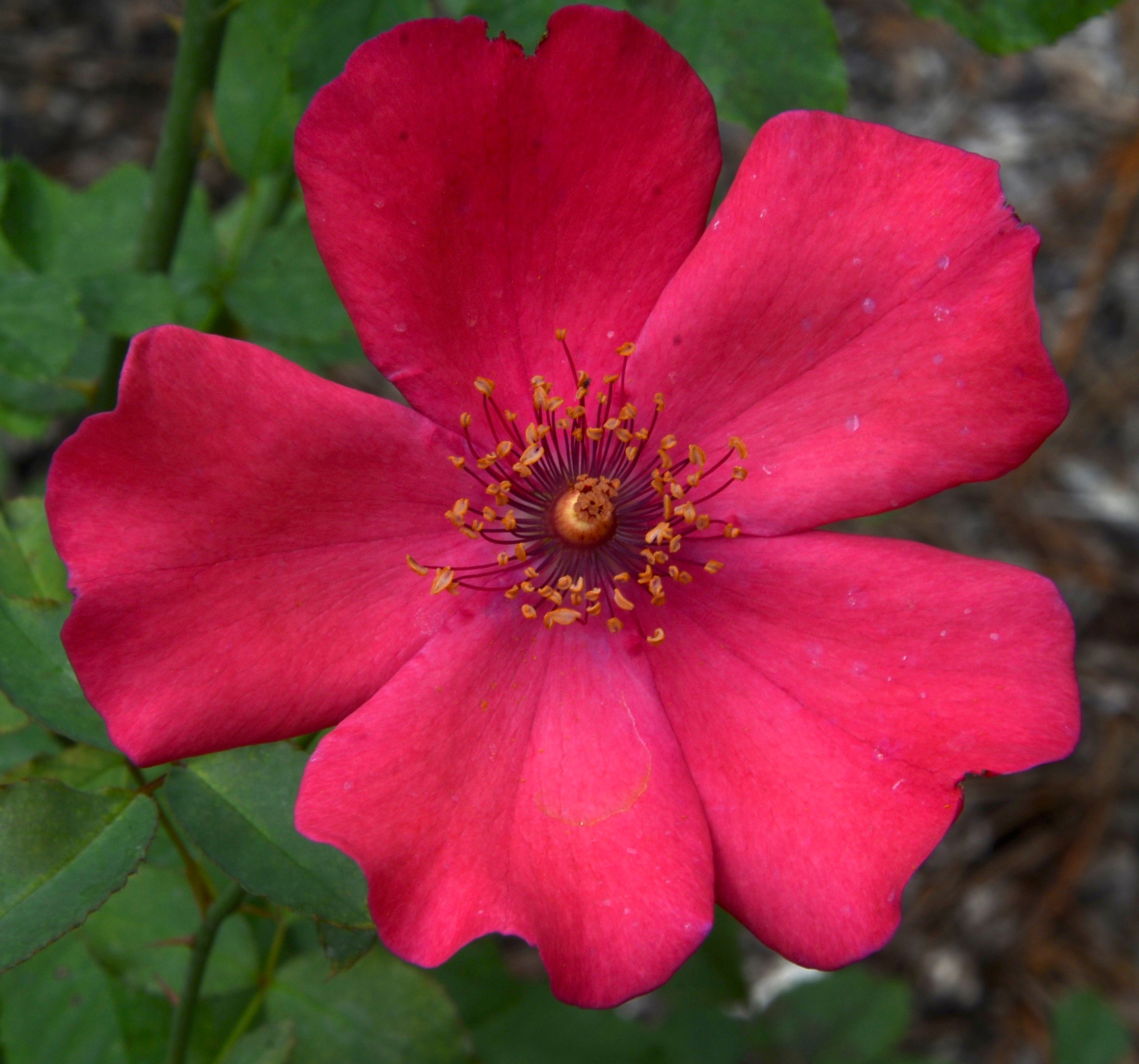 Hallo,
This seedling is a descendant of Soleil d’Or in 2nd generation. 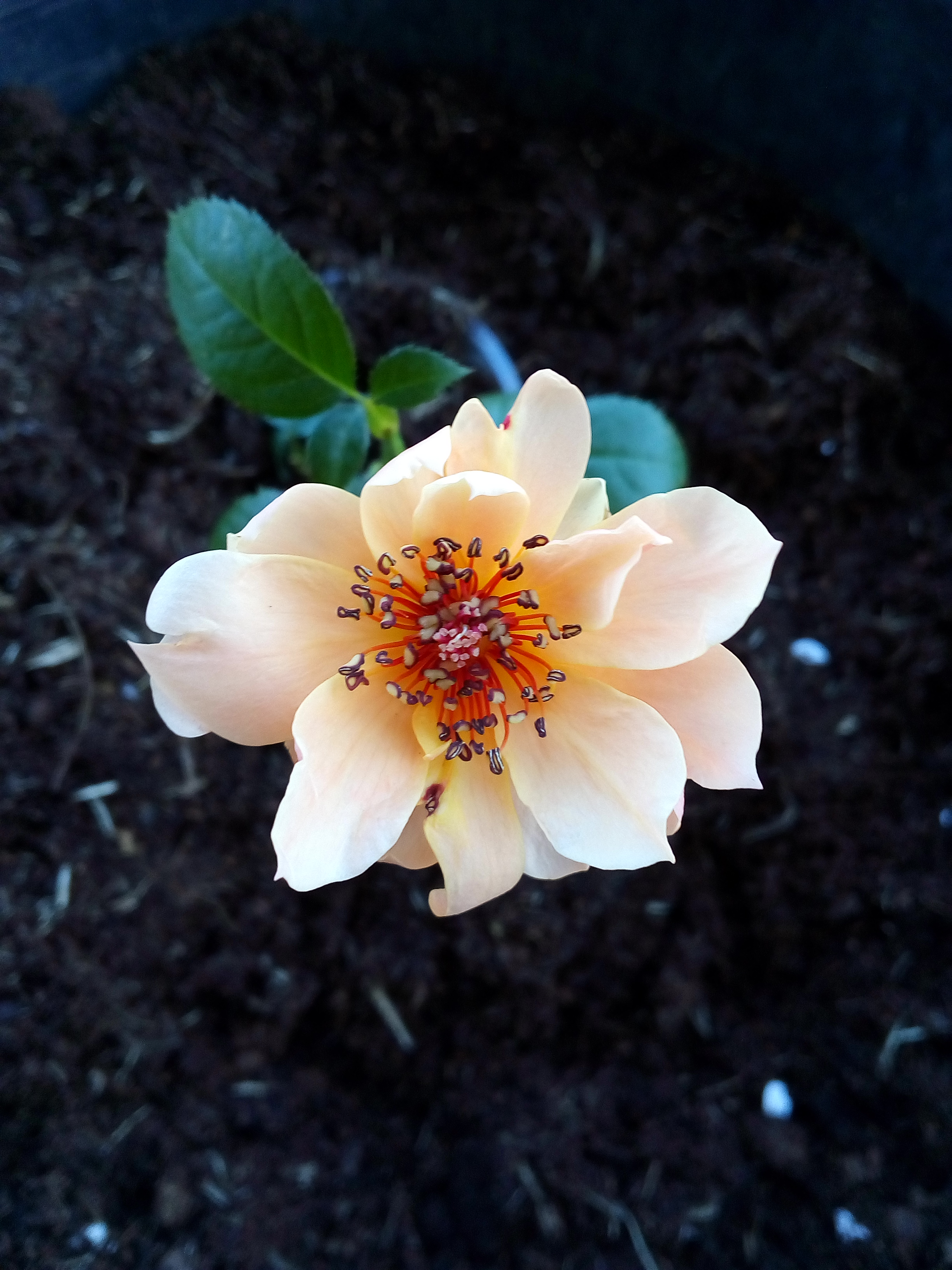