Same observation as the others and a plus: proliferation at times has a virus component/cause.

That is some virus (do not ask me which) have the hability to distort flower parts causing proliferation, shortened petals and oversized foliaceous sepals.
All this "clinical picture is graft and biting insect (and /or nematods) transmissible to another var.

On some it disappears as it ages. I have a nice seedling now (‘Fire and Ice’ x ‘Purple Rain’) whose first two or three flowers were proliferated. It’s 2nd flush of flowers were normal with normal ‘parts’. Worth waiting it out and seeing what happens.

Tens of years ago there were a big rose breeder that released a florist rose with this fault as it was divine when without green center.
Alas the worm was in the fruit and he had to compensate when his customers found they had greenhouses full of ugly flowers.

Thanks everyone for your replies!

Upon closer inspection, there is a blossom within the blossom. Kinda cool. Have any of you seen this before? 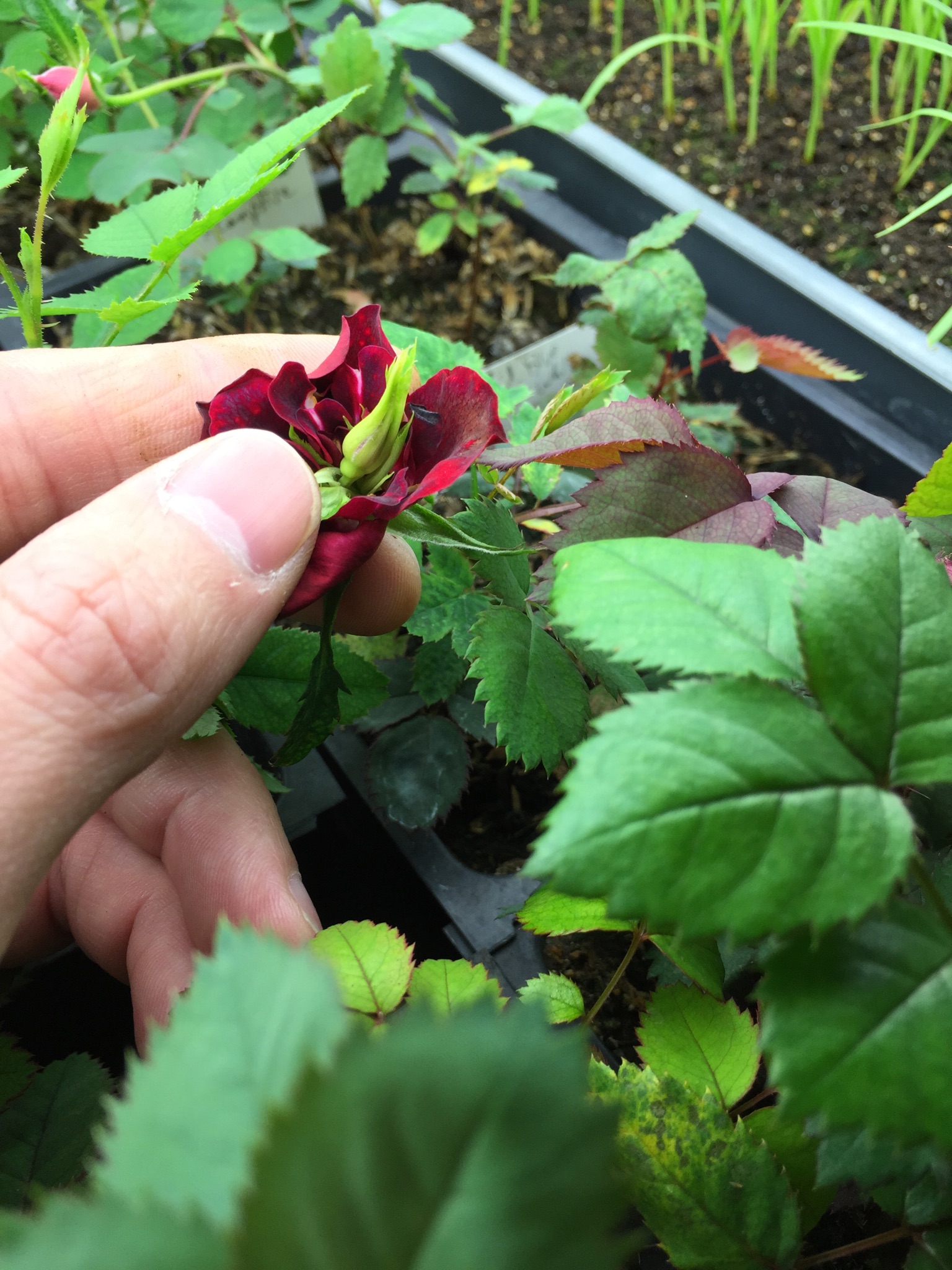 Hi Joe,
I’ve noticed the phenomenon in some of my seedlings. It makes me think of “Madame Hardy” and
Usually destroy them.
Here are some notable examples.
Chuckp 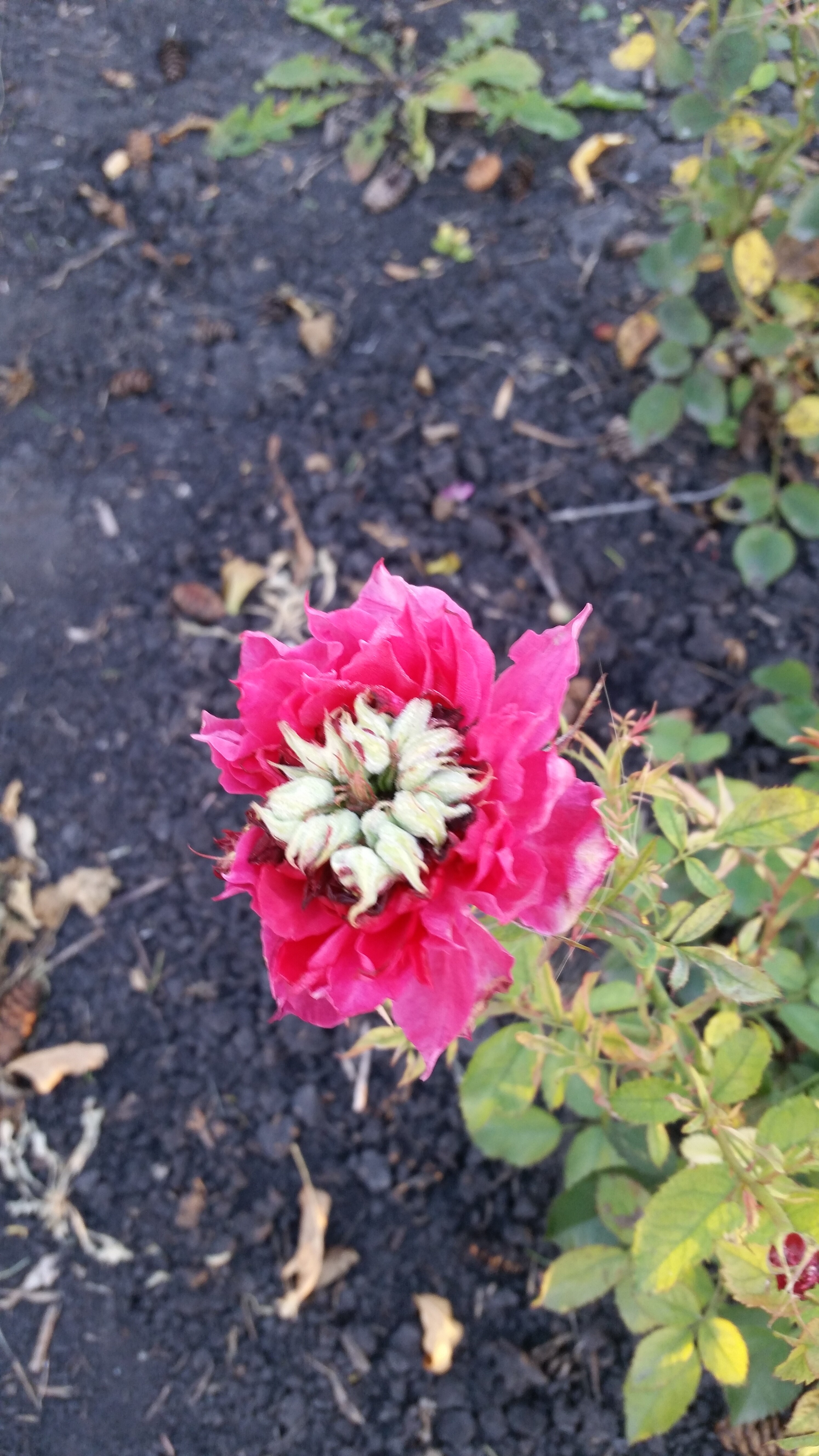 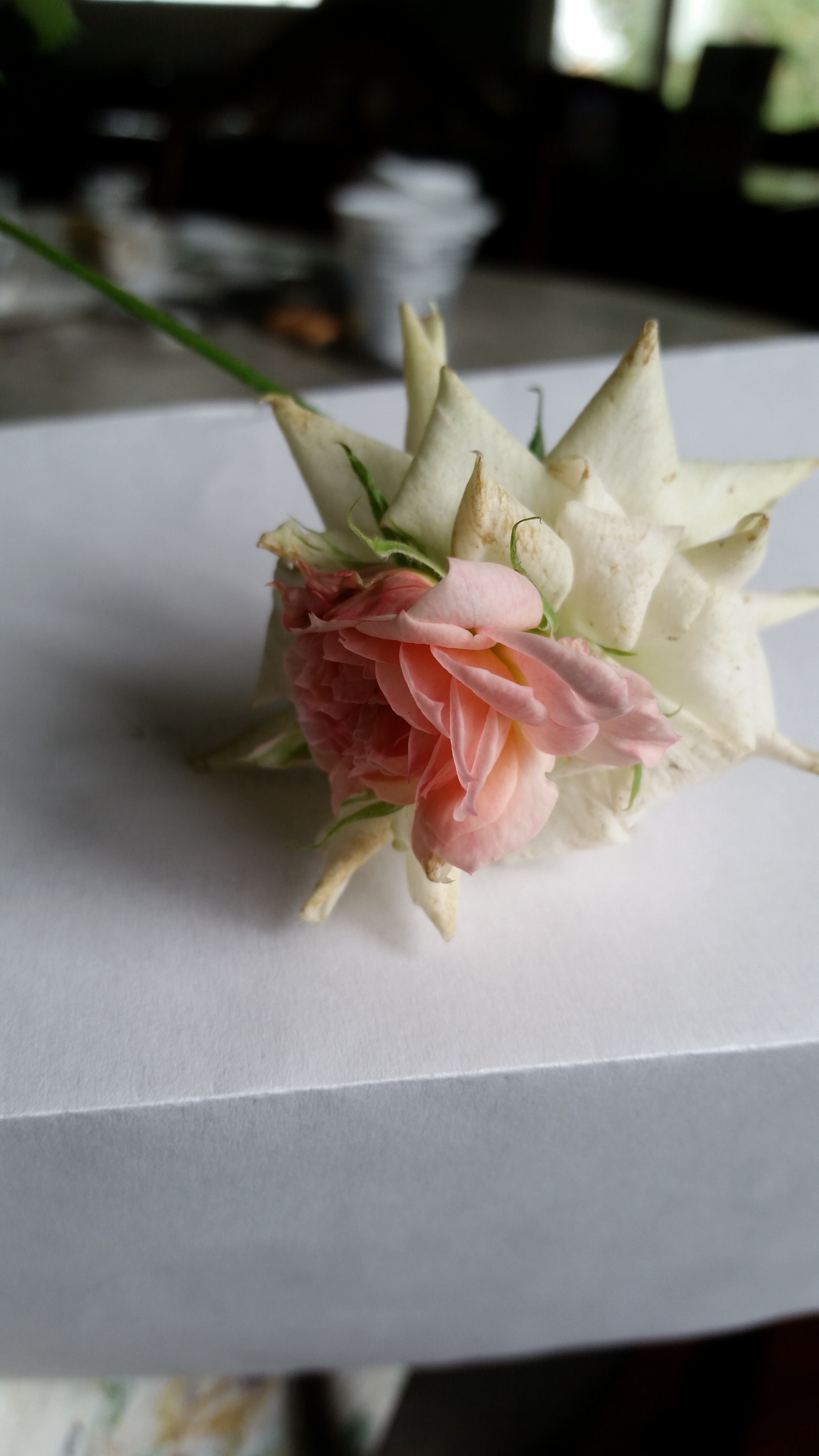 HI Chuck. Yep, it seems like some destruction is in order! Although I’ll let this guy live to see spring.

Proliferation, or vegetative center, causes deformed rose flowers. This is one of those Mother Nature’s Kitchen items. It can occur with many rose bushes, perhaps a bit more with the floribunda roses. There is some school of thought that using high nitrogen fertilizers can bring about an imbalance within the rose bush that will cause the vegetative center. The visual of this one is a mass of green growth coming from the center of the rose bloom. It can look like a knot of green growth and even new leaves coming out of the center of the bloom. The best thing to do is to prune the bloom off down to the first 5-leaflet junction with the cane and let new growth and a new bloom grow out.

During the past years, I had proliferations too on a few different English roses. I blamed the genetic readiness of these rose types and temperature swings for this appearance. What was new to me, that it can be caused in addition by UV damage to the DNA of the flower as well as too high nitrogen concentration of the fertilizers.

Upon closer inspection, there is a blossom within the blossom. Kinda cool. Have any of you seen this before?

My Ispahan did this with one of its last flowers once. There was heavy rain that period. I thought to have read that this happens more often when spring is wet (with damasks, gallica’s and similar ogr types)

I can add that about half my seedlings from Wedgwood x Reve d’Or showed a propensity to proliferate from the 1st bloom. I discarded all but one (understanding that there was little hope for normal blooms), and it stopped doing it after a few months planted outdoors.

It’s strange. I find I have an almost visceral reaction of disgust when I see a poliferated bloom, especially with one of my own seedlings. My husband cites the term “the uncanny valley”, which I take to mean the revulsion we feel if something closely resemble the “normal” but does not quite reach it. I feel this when movies use CG to try to generate pictures of actual people instead of cartoon-like equivalents. The movie Polar Express with Tom Hanks almost made me physically ill. On the other hand, perfectly respectable roses occasionally throw proliferated blooms; I notice this on Abraham Darby. I do not banish the rose from my garden because it is a faithful friend by now, but snap off the offending bloom and cast it into oblivion. I would give the offending seedling a season or two to get its act together before consigning it to the compost pile. You never know. It might be having a youthful fling with weirdness that it will pretend to never have even thought of in its maturity.

I agree about the feeling of disgust, @minutifolia . It is strange, and perhaps your uncanny valley theory explains it.
On a related topic I had a rose hip this summer that produced external seeds, I didn’t mind I was just happy to have it set a hip at all. When I showed her to a rose friend they expressed an audible revulsion. They weren’t trying to be mean, just viscerally disgusted by the sight. We discussed it and they couldn’t really explain why that was so gross to them. Just something that seems mutated and monstrous was their best explanation.