Prickles on the hypocotyl?

This might be a question that’s been answered here before, but I couldn’t find it with a search.

One of my new seedlings came up with prickles on the hypocotyl. Is this common? This is the first cross I’ve made with a parent that has R. spinosissima in its ancestry, so I don’t know if it’s a common occurrence. It wouldn’t surprise me, though, considering the species. 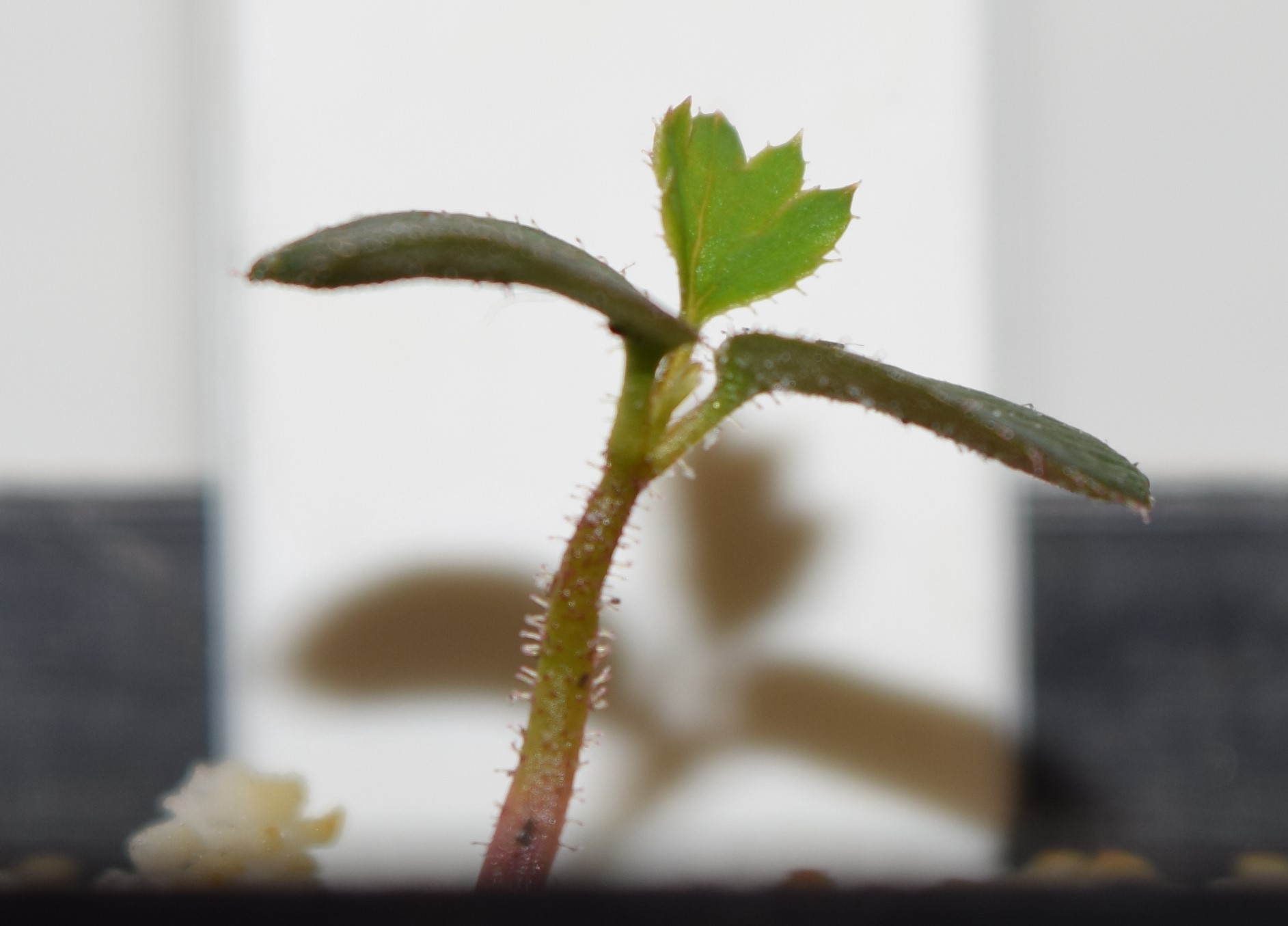 It’s a fairly common occurrence with many types of roses.You will see it with many modern x modern crosses, too.

I thought that would be the case. I’m so surprised that I haven’t seen it with all of the R. rugosa seeds that I’ve germinated. I’m either not paying attention, or I need some specs!

You’re welcome, Tony. They are more pronounced on some compared to others. The most likely reason for your not noticing them before is you’re looking for too many things to keep track of. Kind of like Ralph Moore’s “how many balls can YOU juggle?” comment when I asked why he hadn’t registered a rose he had all ready for introduction, but never got around to moving forward with. Add that to your list of “what to look out for” and you will probably start seeing more of it.

Nice looking seedlings.
Great to see a bud!
Was the spin pollen or seed parent?
It would be great to have juvenile repeat from spin (hybrid I’m assuming?) to sort seedlings.
Duane

The spin hybrid was the pollen parent.

Duane - would you be willing to expound upon the seedling sorting process, or direct me to an existing post?

Is it wise to cut the flower bud off so the plant can focus on growing, or is it worth it to satisfy one’s curiosity and let it open first?

The seedling sorting process may answer your second question for you, as space often ends up a premium. Some people pinch off the first bud, which is no doubt good for helping the plant get established. Others let it bloom because they will cull seedlings at that point. Much will depend on the volume of plants and on your goal. I have done both, and will probably continue to do so based upon the specific cross and the numbers I have; however, I have a lot of seedlings lost due to genetic issues from such wide crosses, which limits numbers for me.

If I remember right there was a section in the rose breeding handbook (maybe the second one) written by Radler on sorting rose seedlings.
There have been discussions on the forum about it also, but you’d have to experiment with what words to search for.
Perhaps others can comment on the process they use.
Duane

Another sibling to the others I’ve posted photos of here has a flower bud and is nearly “thornless”. 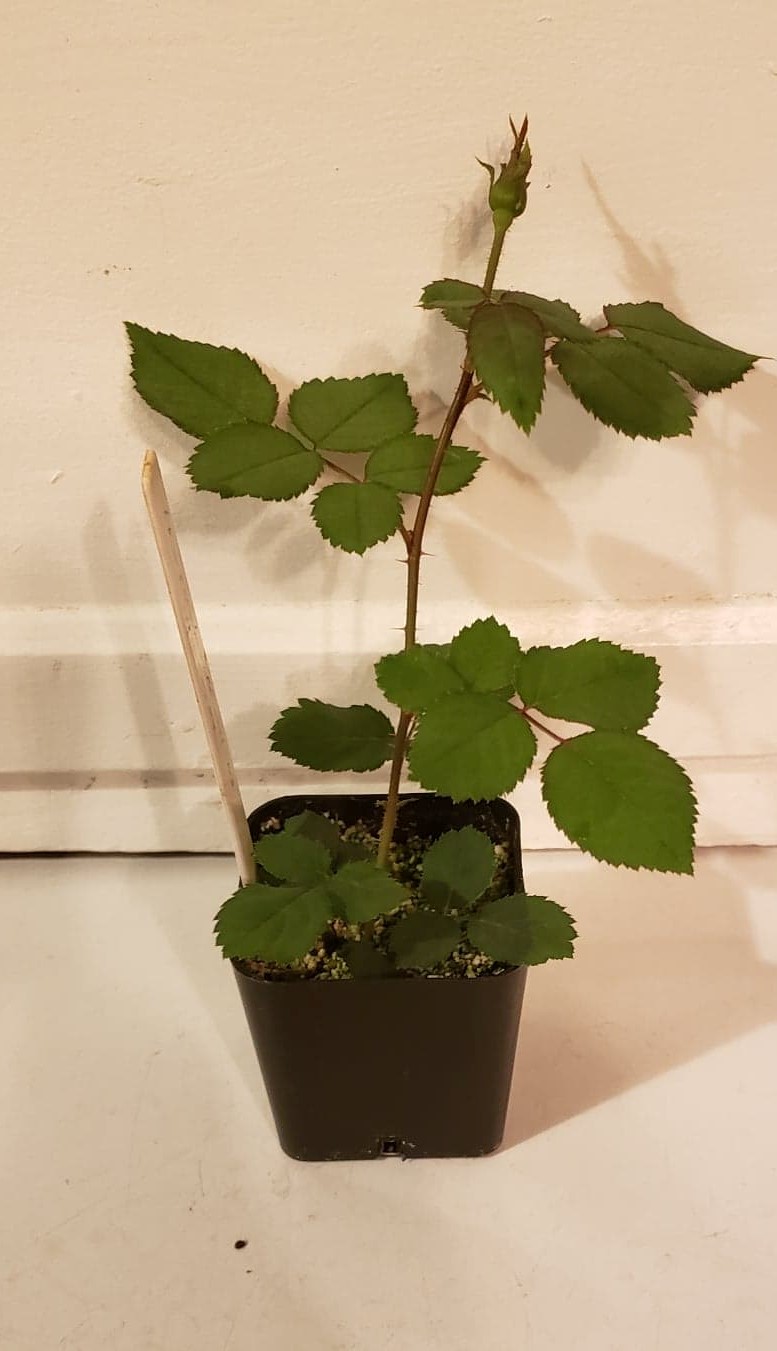 Unfortunately, the first seedling that was thornless died not long after the photo was taken. The flower bud never opened and the plant failed to thrive.

The good news is that the second one that developed a flower bud early is thriving and has flower full-sized blooms in the past week. Photos below. 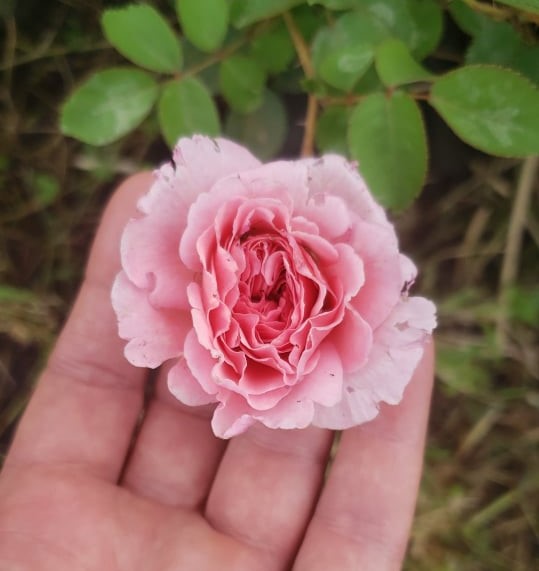 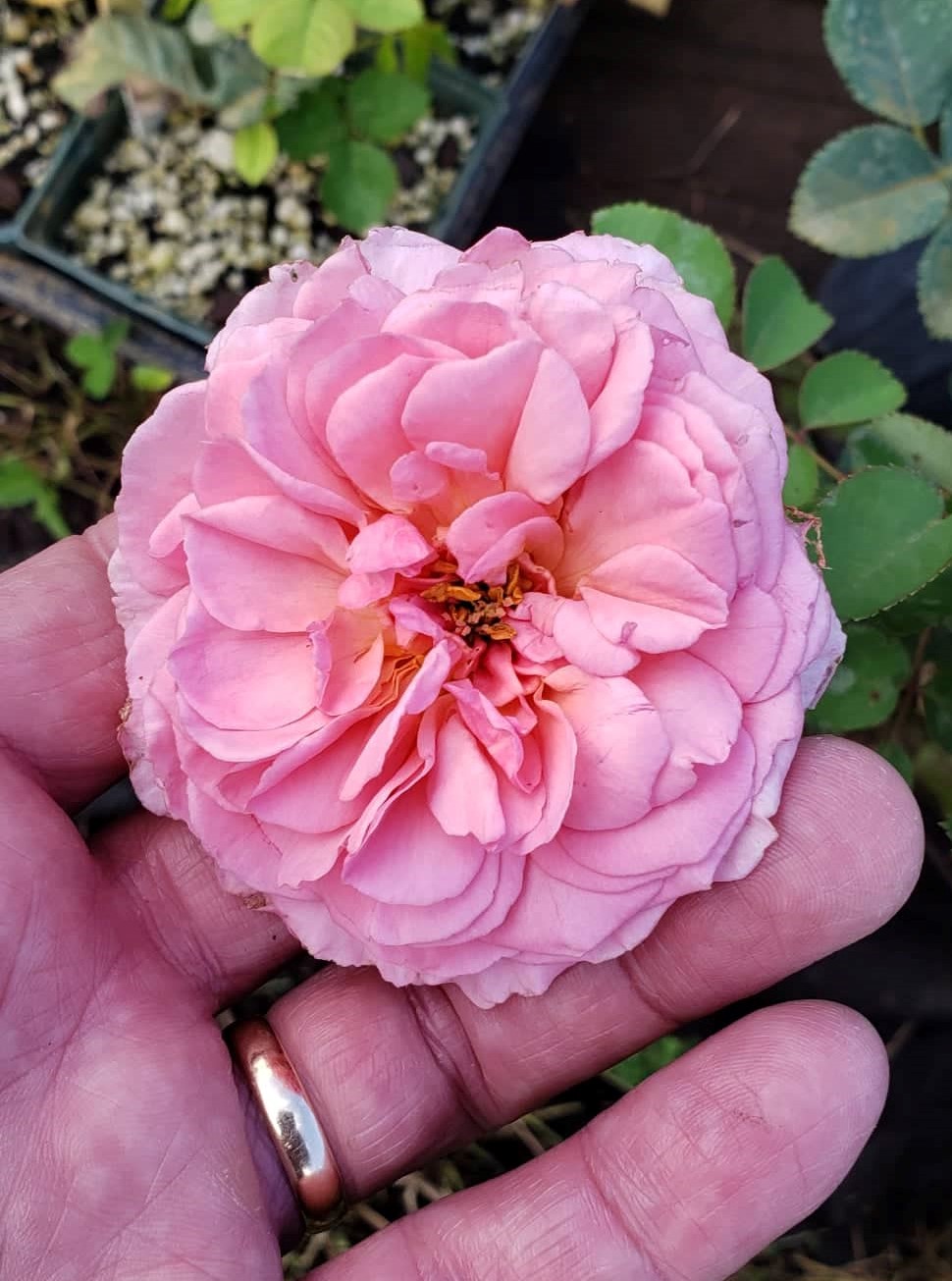 They have a nice slightly fruity with what I think is a tea scent. I’ll have to judge it later under better conditions. We have these small green insects that come out of the cornfields after the corn is done silking, and they damage every rose in my yard for a few weeks…completely destroying some. I had to shake a dozen off the flower before taking the second pic, so it’s kind of beat up…along with the chomp marks.

Beautiful, and great to have fragrance! What were your goals that led you to using a spin hybrid? Hopefully some of that carried through also.
I haven’t had a lot of success yet with the spin route, but just getting started. Most seedlings have died right away. One strong growing one, but no blooms yet.
Duane

I’m looking for OGR bloom type and fragrance with remontancy and Zone 3 or lower hardiness. Not asking for much, right?

This one seems to fit the bill so far…hardiness will be determined this winter.

BTW…I’ve identified the green insects as northern corn rootworm beetles. I guess it’s not the best thing to raise roses on a property that’s surrounded by farm field. I’m going to deal with no flowers the second half of every other summer…

Let us know how the hardiness goes on that one, it is really pretty! Bummer about the bugs.
Duane