Ploidy of Hulthemia's and persica hybrids

Recently, a fellow rose breeder pointed out to me that a lot of te ploidy information of hultemia’s isn’t available on Hmf. And it it difficult to find out since the pedigree is often not published. Which made us wondering about ploidy.
What are your idea’s? Are most hulthemia’s these days still diploid, or are there also good tetraploids among them? Especially I am wondering about this hulthemia by Warner: ‘Golden Eye’ = ‘Rise Up Ringo’.

Triploids and Tetraploids just based on the few linages we know have quite a bit of triploids and tetraploids in them and they are likely being crossed out into non hulthemia moderns mostly (the eye hasn’t gotten stronger like with some of Jim Sprouls)…I mean look at Kordes SEE YOU, the eye is generally weaker than Warners and even Warners newer ones aren’t as strong as his earliest, so probably not a lot of reinforcement from hulth hybrid x hulth hybrid

There’s probably a few lines like the Sweet Spots/Babylon eyes that are more likely diploids (SS Calypso being confirmed diploid) but they are probably the exception.

Golden Eye produces some hips and some germinate and it’s pollen has worked on tetraploids. It didn’t produces a lot of hips but that may just be because it was new for me last season (I haven’t really checked for hips this season, just spreading pollen around still).

Great info about ploidy, thank you Plazbo!
Orienta Aylin (new Tantau hulthemia hybrid) seems to have a good strong eye based on the pics. Parentage undisclosed unfortunately.
I just added her, planted the bare root a month ago, she’s leafing out but she hasn’t bloomed yet. I hope the eye will be as strong as the pics suggest. 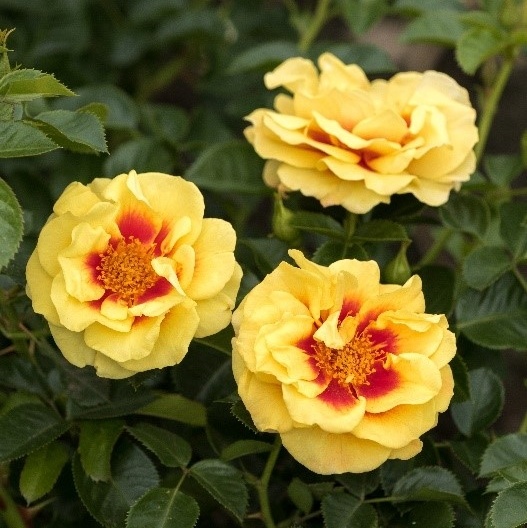 I don’t have any knowledge of the ploidy of the newer Hulthemias on the market and only last year started using Chris Warner’s ‘Ringo’. It seemed quite fertile as a pollen parent.

With regard to my newer Hulthemia seedlings, I think that most are tetraploid, however, I am still using one of my direct ‘Tigris’ seedlings and think that it’s most likely triploid.

Mr. Moore always said, “don’t worry about ploidy since the rose will find the way!”