I’m doing a bit of research into the genetic history of chinese roses and I was hoping someone could clear something up regarding Park’s Yellow Tea Scented China (Siji Danhuang Xiangshui Yueji). The helpme find database for this rose states:

"According to Mr. George Gordon (1806-1879), Superintendent of the Gardens of the Horticultural Society at Chiswick near London, ‘Rosa indica ochroleuca’ was extinct before 1842. The Tea-scented Yellow China which was widely distributed was ‘Rosa indica flavescens’, a seedling of Hume’s Blush.

The rose in commerce as Parks’ Yellow Tea-scented Rose is almost surely not the original. It is likely that the original was lost over 100 years ago. The pale sulfur yellow original was a small shrub that rebloomed, set hips, and had only moderate Tea scent. See descriptions in References. The rose presently in commerce under this name, put in commerce by Peter Beales, is creamy white, once-blooming, strongly Tea-scented and does not set hips.

A new study from 2011 assigns the Name Rosa odorata var. pseudindica to ‘Park’s Yellow Tea.scented China’, based on the original description by Lindley in 1820, i.e prior to the importation by John Parks and Robert Fortune, resp… The description by Rehder in 1915 does not correlate with the “deep yellow” colour stated by Lindley."

In the nature paper, “Genetic relationships and evolution of old Chinese garden roses based on SSRs and chromosome diversity”[2] the researchers place Park’s Yellow within the Ancient Hybrid China cluster ( as opposed to the Old Blush cluster) based on Simple Sequence Repeats (SSR) using unweighted pair grouping method. The diagram below has “O3” which is listed in the supplementary materials as this particular rose. 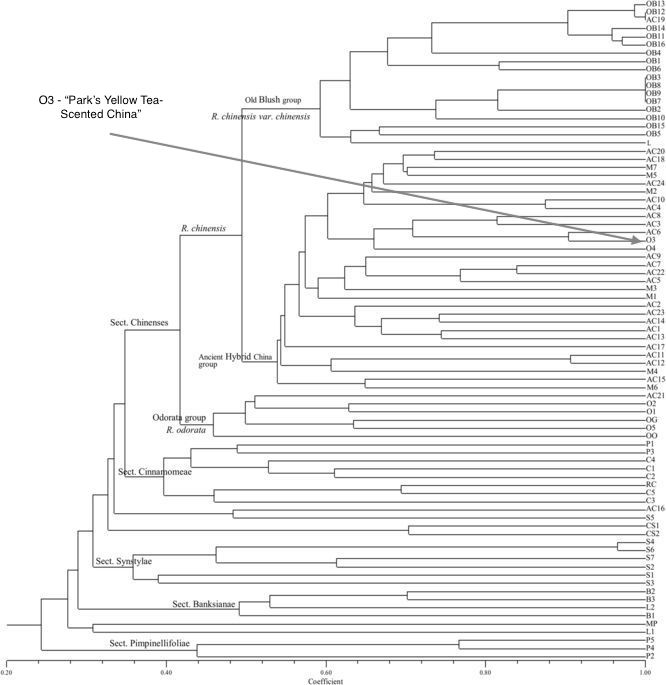 Another paper from 2016, “Nineteenth century French rose (Rosasp.) germplasm shows a shift over time from a European to an Asian genetic background”[1] also lists this rose as one of the roses tested in the supplementary materials to the paper. Alongside the reference to this rose the supplementary materials indicate that the tested rose was bred in 1824 ( as expected for the original ) and was found in the Loubert Rose Garden.

I would certainly appreciate any wisdom this group could offer.

The papers along with the supplementary materials are available at:
https://www.nature.com/articles/s41598-017-15815-6

Highlight. The impact of breeding on the genetic diversity and structure of roses, during the 19th century in Europe, was studied using a genetic and historical

Are the roses tested in these two papers possibly the commerce versions, just mislabeled?

Why bother wading into that quagmire? Barrels of ink have been spilled on the authenticity of the commercial stud Chinas with no consensus and there’s really no practical value to breeders in knowing anyway. From our perspective the traits they offered were long ago introgressed and amplified to the point where we can pick and choose almost any degree and combination from off the shelf.

The French government maintains their national rose collection at Loubert, its not a commercial nursery. Whether they sourced their material commercially only the curators there can tell you.

If so, why would it appear to be within the Ancient Hybrid China group rather than the Old Blush Group?

That’s a little easier. The wild types, var spontenea and the Old Blush group, are just that, not a lot of refinement which is to say selection for domestic traits. The ancient cluster, as described in the paper, are the more highly selected cultivars, much more modern in the sense that the stud Chinas were garden varieties that had been domesticated for millennia before the Europeans appropriated them for breeding. I grew two cultivars of var spontenea for a number of years. These were sourced from the wild in China. They were quite rustic and not at all like the various garden varieties that I have seen labeled as being a stud China.

What the dendrograms do clearly tell us is that the China cultivars as a whole are pretty evenly distributed across a broad spectrum of genetic relatedness and the Loubert Parks sits right in the middle which makes sense. Put another way there is a lot of genetic variability in the roses they are calling Chinas, so who knows which is from where.

One thing I have always wondered is why the China’s didn’t show up in the written record until the colonial period despite the fact that the Silk Road had been already been operating for two millennia. It seems much more reasonable to think that breeders in south eastern Europe and along the Mediterranean coast would have had them long before.

I’m doing a bit of research into the genetic history of chinese roses and I was hoping someone could clear something up regarding Park’s Yellow Tea Scented China (Siji Danhuang Xiangshui Yueji). The helpme find database for this rose states:

"According to Mr. George Gordon (1806-1879), Superintendent of the Gardens of the Horticultural Society at Chiswick near London, ‘Rosa indica ochroleuca’ was extinct before 1842. The Tea-scented Yellow China which was widely distributed was ‘Rosa indica flavescens’, a seedling of Hume’s Blush.

Flavescens was raised in England, or imported from France, ca. 1821. It was only weakly scented. It was offered for sale by Sarah Mackie, Norwich, England in 1825 as “Yellow”. It was likely sold earlier, but I can’t find a catalog listing.

Parks’ Yellow China (Ochroleuca) was actually quite fragrant, according to Lindley’s description, but not very yellow except near the bases of the petals. Loudon described it as “cream-coloured flowers, deepening almost into yellow in the centre”. However, it was not a Tea-scented rose.

Some of the confusion between the two apparently began with George Don’s A General History of the Dichlamydeous Plants, Volume 2 p. 582 (1832):
Rosa indica var. ochroleuca; flowers double, large, cream-coloured, without any scent. This variety was introduced from China in 1824 by Mr. Parks, and is figured in the thirteenth volume of the Botanical Register. It is commonly called the yellow Chinese rose."

In fact, Don must have mixed up his notes on the TWO yellow China Roses Parks brought back in 1824. It was the yellow Rosa banksiae that lacked scent and was figured in the 13th vol. of Bot. Reg.

Parks’ Yellow China Rose (not R. banksiae) was excessively double with a blocky receptacle and simple sepals. We can see its influence in ‘Maréchal Niel’ and ‘Alexander Hill Gray’, among others.
http://bulbnrose.x10.mx/Roses/Ehret/ParksVsKnight/ParksVsKnight.html

Knight’s (?) Yellow (tea-scented) China Rose had less scent, fewer petals, and was easier to use in breeding. I don’t know yet whether Knight raised it, or imported it from France. Dr. Cartier raised a yellow China rose that was listed in Cels’ catalog for 1817.

I’m not sure exactly where this tidbit fits in, but some people think the large once-blooming false “Park’s Yellow” currently in circulation may be ‘Fee Opale’, a seedling of ‘Fortune’s Double Yellow’. If so, that it falls within the Ancient China Cluster would make sense, if that cluster also contained FDY.

“Park’s Yellow – in commerce as”