Historical “Euro-Cdn” rose’s first bloom in my garden from a small runner planted un 2021. Why care?

Opening performance of bloom form is aesthetically pleasing to my eye. No fragrance detected.

Origins and type debates can end up quite passionate. Generally accepted likely arrived from Eastern Canada and before from Europe. Normal pioneer transport story.

If a Damask derivative, l am pleased as none l have tried have survive winter to consistently bloom in my garden.

Breeding potential automatic first question for me … not found any examples but other than hybrizing pioneers doubt anybody tried to capture any attributes. May not bode well if the giant 5 did not release an effort.

Nice if longer time in garden trial it gives fragrance. Actually not a trial, never leaving as has the history of right rose, right place, like Dr Merkeley … at thats just from just popping one bloom. Now the long wait for Mossman. 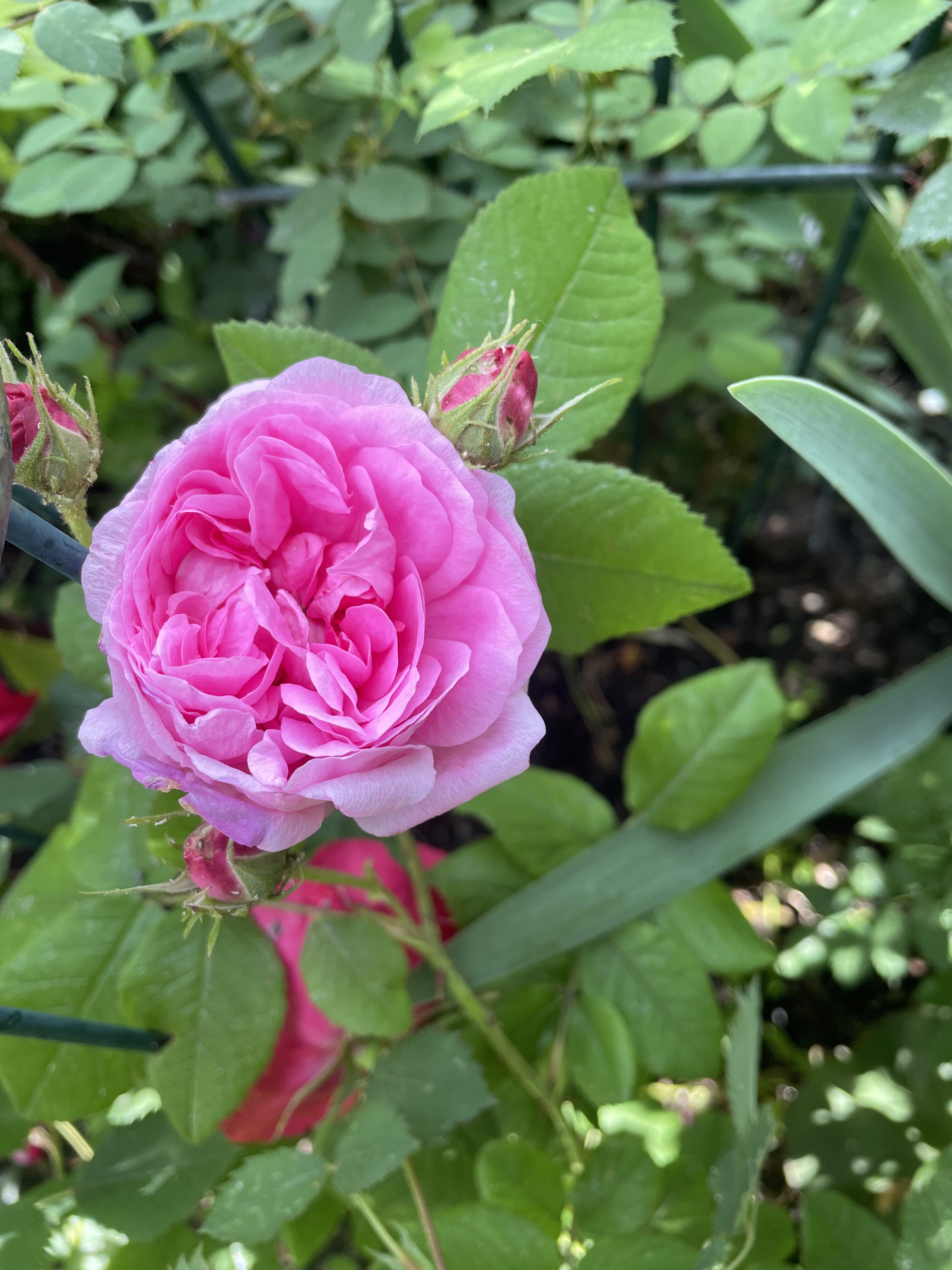 Your photo reminds me somewhat of ‘Shailer’s Provence’–although I’m less sure about that similarity when looking at some of the other photos posted to HelpMeFind (maybe not all of these are really the same rose, and with a name like “Granny’s Rose,” that would not be unexpected). The background of that rose is suggestive of something that might prove unusually hardy in Canada, though. As with any oddball hybrids, unless you’ve seen hips and seeds being set, especially after applying some fertile pollen from another rose just to make sure that bee access isn’t the problem, it’s probably a better bet to try harvesting anthers instead.

I can not comment on Shailer’s except a generality that the bloom “unfurling” development photos look more ordered than Grannie’s.

Attached photo of Grannie’s today - 3 day development stage - gives flash back’s to my “tender” OGR extravagances of yester years. Before l let nature have at them as l to set on the right path. I lie, sort of, 2-3 year old plantings of Baronne Prevost, Sidonne, Panachee d Lyon and Juno are in full bloom re-run in my front protected bay. Lost one of the OGRs to winter, Yolanda d’ Aragon

Grannie’s bloom today is flash back to one of the OGR forms l wanted decades ago in a hardy rose … quadra close, but not hardy in my garden. And to think an old winter resilient rose with the muddled OGR damask-like form existed (like Dr Merkeley early bloom form is a mathematical OGR alternative version ), and with foggy pedigree history and mystery, around the corner from me is great twisted irony.

Gads another metaphorical slap telling me to quit-spinning my wheels by looking enviously over the fence, look in your own backyard. You’ll likely find it, or make it … its faster. 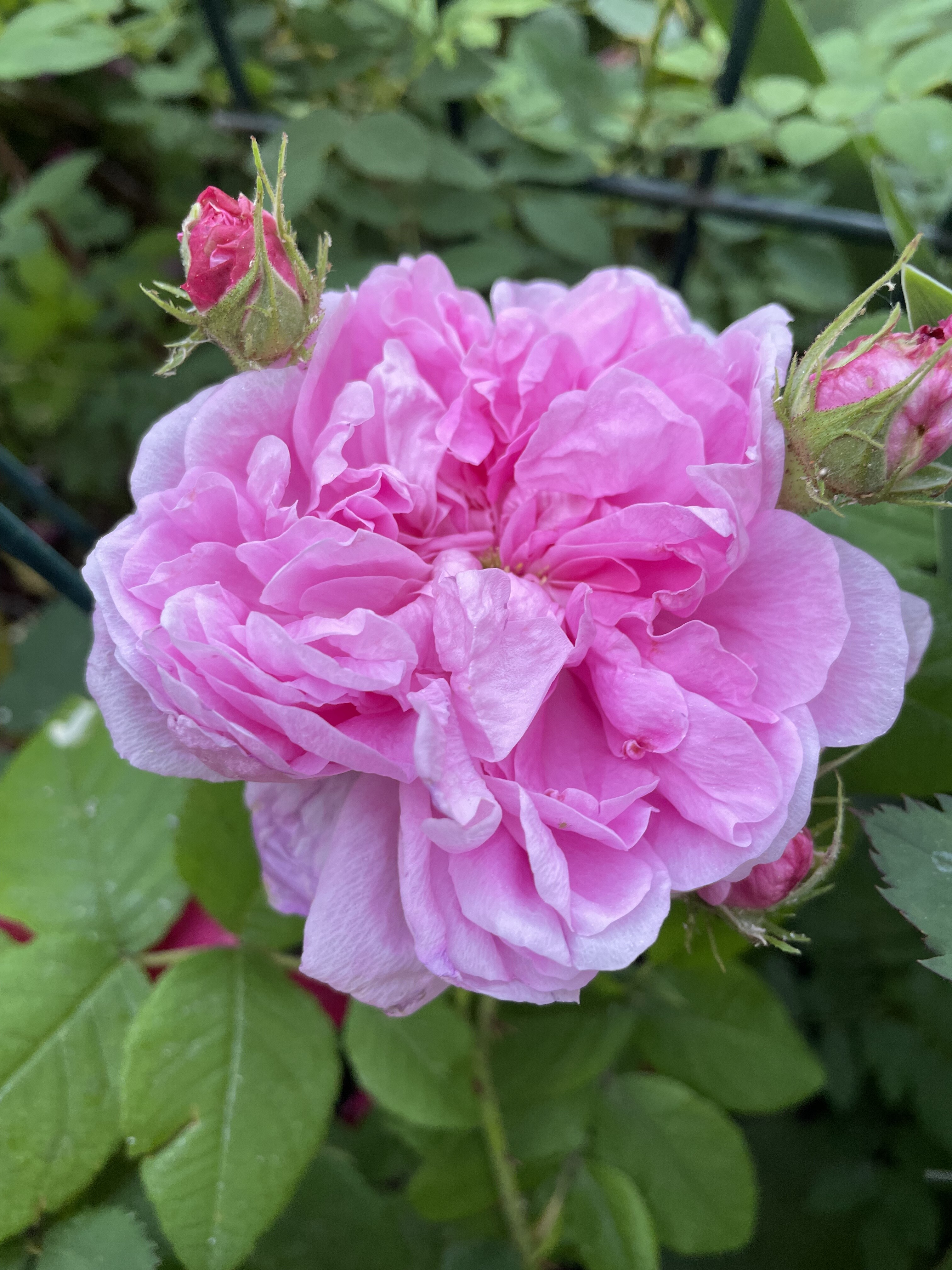 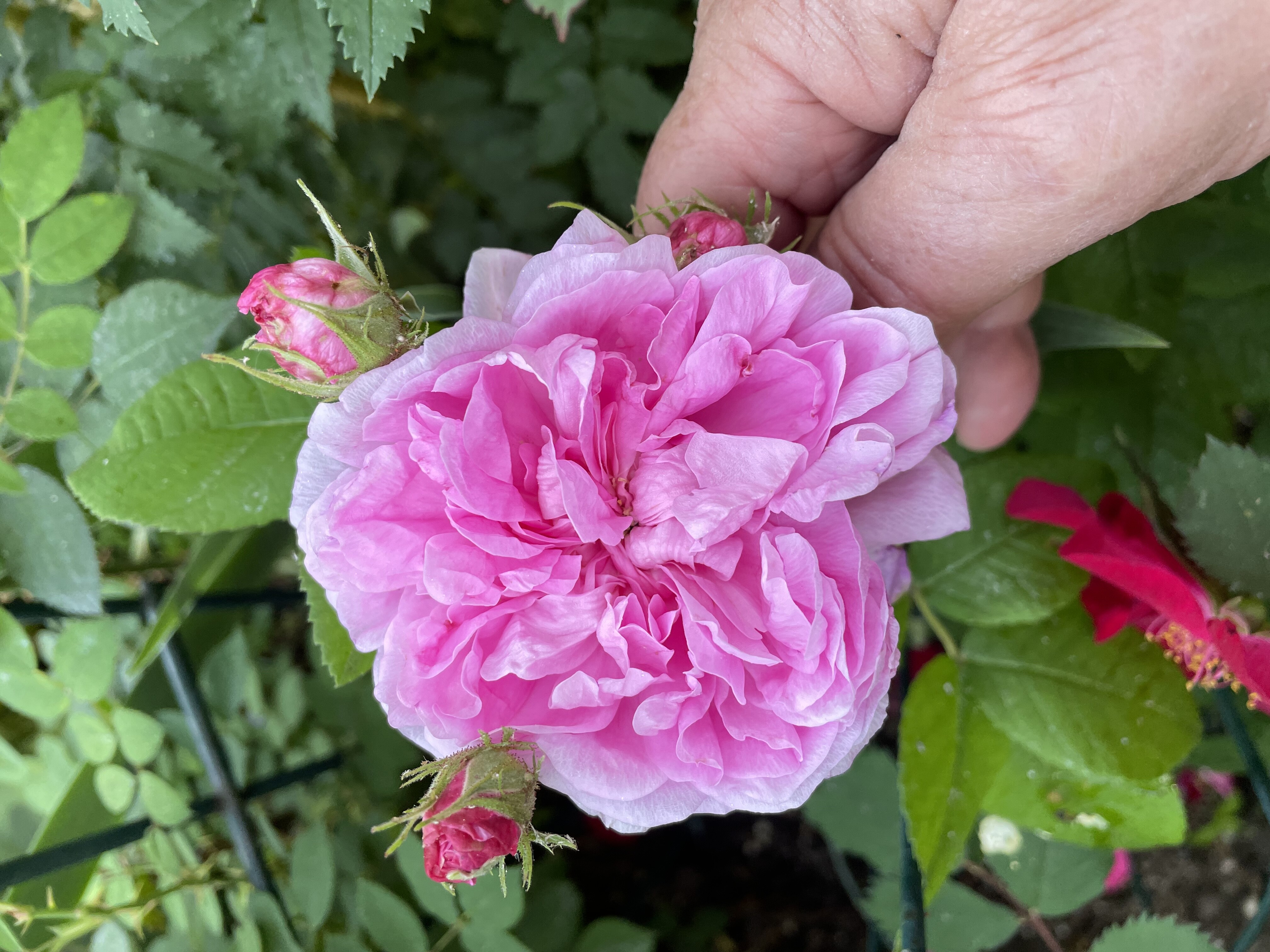 … mathematical analogy obscurity clarified for clarity, Dr Merkeley and other OGR early bloom form reminds me of the fibonacci sequence control, or definition … or it just looks “ordered cool” when blooming.

Been bugging me for months that my rose label was not correct … self harvested (rustled) and self - labelled rose.

Checking and comparing, and after conflab with a historical CDN rose expert, given only two choices, we mutually conclude (I think) based on bloom color, form (full double), it is “most probably” the “Indian Head” found rose Percy Wright offered for commerce.

I am impressed enough with its “hardiness and beauty” that more going in through commercial connections. Finally another unnamed, likely classy European origins OGR for my prairie garden c/w mysterious pedigree origins … until the expert who said “Victorian Memory” was Isabelle Skinner surfaces ?

Has many similarities with Impératrice Joséphine. A R. cinnamonea hybrid which is quite hardy I guess.

Good lead to consider. Does it bloom on new wood?

The past debates and opinions focused on either a R gallica and/or R. centifolia as one of its grandparents parents. l don’t venture a guess. The other grand parent must of been something “very” different. Or in subsequent generation “parents”. It also could be a fluke of nature ( Darwinian ) where only one offspring of many could last in this climate.

Reports of Sterility is not a good sign for using.

I fixate on it blooms on new wood as a major difference from those two potential origins. I fixate due to trying to grow - mostly unsuccessfully - varieties from both classes. They did not appear to bloom on new wood.

I am not sure it reblooms, based on Percy Wright’s (l think - didnt recheck) musing about china influences.

However a lot of settling of the prairies occur way past introduction of the chinas - so as they say “maybe”. Season for me is not long enough - however if it reaches old age (10 yrs) here l may see it.

Its likely to be in the states and not unique to Canada.

I’ve got lots of “maybes” and “perhaps” to offer but no “l know for sure” and “here’s why” from me for a long awhile.

But since l like this rose l have no problem hearing about, or pursuing candidates (l’ve got enough incoming earning science training that l don’t worry about rose reputation vs cash when floating evidence balloons of potential id names as a wag. I learned sometimes answers and good leads can result.

Still leaning to “hardy portland - damask” only because got experience growing them … sort of … at -35C. Also bourbons, damask, gallicas and centifolia, teas, chinas and the woolly ones etc, etc…

And tracing Autumn Damask” (its not GST’s Autumn Damask”), - way too tender in my garden - intriguing as its claimed R. fedschenkona in it as second generation cross. But who or what is giving the bloom on new wood trait?

Once blooming Fed. rose extremely hardy in my garden, useless as seed parent in my experience, but others appear to except its pollen.

Looking at photos of them side by side, I don’t know about your identification as the “Indian Head” rose–both the flowers and leaves seem quite different to me, and some of the HMF photos of “Indian Head” give me the distinct impression of a R. rugosa hybrid. Karel’s Imperatrice Josephine suggestion seems like a better lead to me for your foundling. It should not rebloom, however, so if yours does (which I doubt it would), we’re probably talking about something very different.

R. fedtschenkoana is generally classified with species that can rebloom, although it’s only sporadic after the main flush. Both it and R. moschata have been documented to possess the RoKSN A181 allele. R. moschata seems much more freely remontant for some reason. Their involvement explains the Autumn Damask flowering pattern. Its genetic similarity to Kazanlik (Trigintipetala) suggests that it has exactly the same parentage.

It also seems like the background of any typical Portland or Damask variety would be insufficient to explain the kind of hardiness you are finding with “Grannie’s Rose,” so the involvement of a much cold-hardier species like R. majalis (cinnamomea), R. pendulina, R. rugosa, R. davurica, or something similar would probably be needed to provide that extra boost. If the hardy parent is diploid like R. majalis, R. rugosa, or R. davurica, the offspring might be triploid and possibly less fertile, but R. pendulina is tetraploid.

Txs Stefan good stuff as they say … forgot about RokSN A 181 and Fed., due to it not being a success as a seed parent. That and hardiness is why l crossed it both ways this past season.

So still hope l see repeat like an R. bifera is suppose to have if allele ( sic?) in crosses and Indian Head.

I am in theory receiving a number of Grannie’s Roses and Indian Head this spring so side by each comparison is in the pipeline. Want them to up garden class.

Never have gotten kazalnk to fire in many tries in the south gardens - not hardy. Latest effort on last legs this past summer.

Read a bite that a worker has crossed R moschata with rugosas hybrids … await the germination results release … though my soil will be a challenge for rugosa hybrids.

Anybody figure out what shailor’s is?