New roses you are using this year?

With the season for planting upon us here in the south, I thought I’d ask folks what new roses they are excited to be using this year, and why/what their hopes and expectations are. We’ll see how much I get done, but I’m mostly studying some old pedigrees and trying to get inspiration for uses of my existing stock. Hopefully I’ll get blooms off my species: setigera serena, and banksia lutescens, that might be used in some crosses to moderns.

The above was from me… I forgot my sign-in for this forum it’s been so long!

I’m excited to start working with L83 this year. Have also ordered Frontenac and my own copy of Bonica (have been using purloined pollen until now.)

The plan this year is to cross zone 3 hardy reblooming roses with bullet-proof modern tender roses, mostly Kordes. I will select offspring first for disease resistance, then for cold hardiness, then for beauty.

Unless they’re really, really beautiful in which case I will probably hold onto them and be in denial about their terrible disease resistance, as I always seem to do.

In addition to using some of my new seedlings from last season as parents, I’ll be using these for the first time this season:

Good to see you back, Philip!

Speaking of L83 - I used Prairie Celebration quite liberally this year (Orangeade x L83). Mom has proven to be quite BS resistant in my garden - perhaps surprising because Orangeade is very susceptible here in central GA. OP hips from PC produced numerous seedlings and at least one so far has a bud (just germinated recently). I also crossed PC pollen on one of my seedlings, an offspring of My Wild Irish Rose, and Dr. Buck’s Prairie Flower. Both crosses resulted in seedlings that have buds forming under artificial light. I’m expecting very healthy, prolific flowering, genetically diverse offspring.

“in denial about their terrible disease resistance, as I always seem to do.” LOL… Aren’t we all? I suppose after a few thousand seedlings, that tendency might subside, but just as my child is the brightest, most beautiful, etc… It makes me wonder how an amateur can ever objectively determine that a seedling might really have enough merit to try to promote.

I have Royal Bonica but never used it. I think it was Paul Barden who dissuaded me with “Pink, pink, and more pink with the occasional white” commentary. I gather that the parent, Marthe Carron didn’t impress Pierre in France much either despite the numerous healthy plants Meilland got from her. But the fact that you continue to use it implies you have found some true merit to it, Donald?

Rob, you have some interesting ones to my mind. The only one I have grown is Peach Drift, and I do like her, though she is susceptible to mildew. Does set hips fairly well for me.

Good to be back, Kim. Just thought I might annoy some folks with my uninformed opinions and armchair hybridizing again.

(Fatherhood doesn’t leave much time for actual dabbling in pollen.)

Phillip- re Bonica- it’s too early to tell really. I have three offspring of Easy Going x Bonica that I have kept. Two are beautiful and disease-resistant but not at all vigorous. One is a vigorous blooming machine, and disease resistant, but not especially beautiful. It is on HMF as Edith Prickly. I crossed Edith Prickly with Julia Child and got a seedling that looks much like Julia, has excellent health (so far) and smells divine. Will see what comes of it; it’s just a year old now.

I had to look up Edith Prickly, for no better a reason than I have a couple of Matilda Pricklys. However yours is named commendably after a notable, and mine are simply statements about their most prominent feature.

Well, mine got her name from her amazing amour that she inherited from Easy Going. I would like to start selecting for lack of thorns but really once you select for fungus resistance, cold hardiness, beauty, and scent, you can’t afford to be too picky.

I’ve tried a few David Austin roses before with out stellar success, but this year I’m hoping to try something old again.
I plan to give Golden Celibration another look. My stratify is to cross GC with some of my Hazeldean seedlings.
Chuckp

I’ve heard from others about mildew being a problem with some of the Drift roses. I’ve been growing Apricot drift with no serious health issues and decided to pick up Peach Drift end of last season. I’ve not much experience with PD but saw no serious health issues for that one either. Maybe I’m in a low pressure area for mildew. The plan is to cross them with some of my healthiest breeders including Orange Ruffels and Lily Pons to up the wichuriana blood in F1. I’m a huge fan of Apricot Drift.

I’m hoping to capture many of PD and AD qualities.

Good luck with Royal Bonica if you end up using it.

I’ve added several old Teas and some newer HTs to the “harem”. Irish Hope is an ultra vigorous British floribunda which a friend sent me. I had to give it a major trim for it to fit in a fifteen gallon can! But, it’s taken off, grown and flowered its first summer, setting hips all over the plant. I am planting some of the self set seed now to test germination. The scent, color, form and health have shown themselves to be very good so far. Chandos Beauty is another extra vigorous, intensely fragrant, marvelously healthy floribunda which I wish to explore. Ironic that, once again, Harkness’ roses like where I want to grow them. Mr. Moore raised some interesting breeders using 1-72-1 and Gold Badge. Irish Hope is a much better plant than Gold Badge, as is Chandos. It will be interesting seeing what adding them to the mix might result in with 1-72-1 and the species.

Rob, mildew is a new one to me since moving to Central TX. (Never an issue on the hot, rainy Gulf Coast.) I don’t know much about such, but I’ve wondered if using minis such as e.g. a Poulsen Greenhouse rose (generally requiring a certain mildew resistance due to their cultivation) such as one might find at a grocery store (Aldershot Nursery stuff) could be a plausible mate to reduce mildew, or if such would present a host of other issues. I’ve wondered too if some of Poulsen’s smaller garden roses (e.g. the “Courtyard” collection) might be derived from miniatures that didn’t make the mini cut, and might have similar genetics to the mildew resistant lines. I don’t know, but I do see the dirt-cheap miniatures on sale from time to time at my grocery store, and I have one Courtyard rose that has never shown mildew (though it is not immune to BS). Curious as to other’s thoughts/reactions to the idea…

(Peach Drift is nonetheless a very nice rose in my garden, and one of my favorites, BTW. It is fragrant to boot.)

Kim, I have wondered about going back to some historic crosses and recreating them substituting one newer, “improved” parent to pair with an older proven parent. I enjoy many of the teas, but that takes things further back than I have researched. I wonder if issues such as floppy necks and twiggy or gangly growth can be quickly overcome in a cross or two. Do you see issues you are concerned with, and do you feel they can be overcome pretty quickly?

And do you want cuttings of G. Nabbonand, or Thomasville Old Gold? They’re both very lightly thorned at worst, in my garden.

Kim, I’m wondering how Irish Hope compares to Kordes’ Sunny Sky. The coloring looks similar. (SS is purportedly very resistant to BS in Europe. I think Chamblees is carrying it this year.) And Chandos Beauty looks pretty impressive based on reviews. I’ll be interested in knowing how readily it accepts colors from other parents in its progeny. Getting either to accept a deeper yellow while maintaining health, I expect, won’t be a very easy feet. Keep us posted!

Hi Philip, I think recreating historic crosses with “new and improved” genes has crossed most of our minds at one point or another. I’m not that concerned about weak peduncles nor twiggy growth as long as the results are attractive and perform well in this climate. “Twiggy” pretty much describes most Chinas, Teas, minis and species, so what’s to worry about? I don’t expect to raise a Queen Elizabeth with a species bloom, but having now written that, probably I should expect to?

I’m not familiar with Sunny Sky, thanks. In my climates, I’ve experienced Kordes roses wanting to almost climb, which I am not inclined to want to deal with. The Harkness rose was needing a good home, was offered and it made the sender feel good to share. It’s proven itself suitable for this area (and my tastes) so I’ve fallen into Mr. Moore’s “because I had it”. How dark a yellow is going to be possible using the species I am playing with is anyone’s guess. I’ll be happy if they show hybridity, are healthy and pretty!

Or to paraphrase Ralph’s thinking, “As you know, ah, you go to [hybridize] with the [pollen] you have—not the [pollen] you might want or wish to have at a later time.” We’ve all been there, but it does lead to some of the most inspired crosses, in hindsight. (Can one claim inspiration retroactively?)

Are your teas generally more demure than Kordes’ roses? Most of my teas get to pretty prodigious sizes. I don’t really have any newer Kordes in the ground at the moment, so don’t know what to expect in my climate…

I’ve spent the better part of the last thirty years “obtaining” the roses I wanted to use, so I wouldn’t have to use what I had instead of something I felt might be more useful. That’s very much what I did with collecting the Teas and Chinas which should be healthier (less mildew) and have already demonstrated their fertility. Other than Niles Cochet, which is HUGE, the others can be kept in the five by five foot range in this climate without damaging them. Niles, on the other hand, can achieve mountainous proportions! 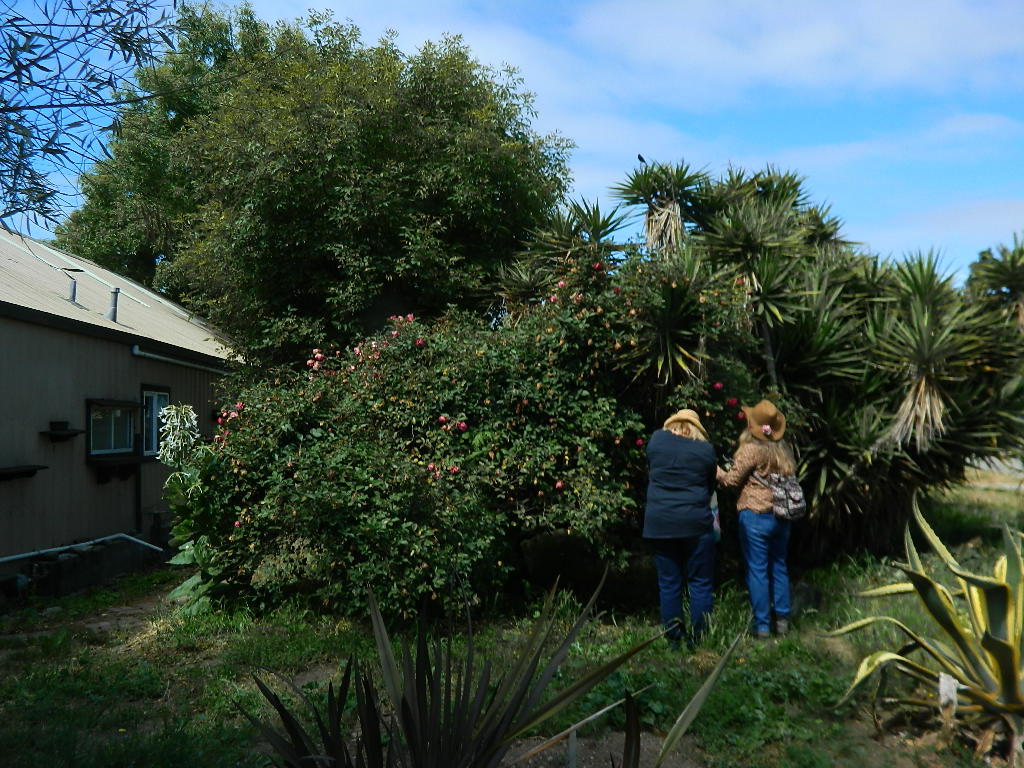 This plant has grown for many decades in an abandoned lot in San Juan Bautista, a few blocks from the mission. At the worst of the drought, people would bring buckets of water to dump on it. This is how it grew in spring of 2015. I have a rooted cutting of that particular plant. It will be interesting to see what it does here.

That’s not atypical for several cultivars of five year old tea roses in e.g. New Orleans. I don’t recall which ones (I have seen an 8 foot KO about two blocks from my prior home, however, so I don’t know if our warmer climate does it.)
If the Kordes are even more vigorous, sign me up!

I am excited to use one of my own creations this year, Champagne Bubbles. This is a cross of Ducher X Nacogdoches. This is my attempt to create a yellow hybrid china which are very rare. Both parents are found roses and Champagne Bubbles is the first progeny listed for Nacogdoches. I have a number of buds I am waiting on to cross this sprng. The first bloom I left intact to see if it would self-pollinate and also to see how well the petals held.