Three weeks ago (May 2nd) I attempted my first ever hybridizing.
Not the one I was aiming to make later, but just a practice round using two roses that seemed “ready” at the same time.
Mamy Blue × Pascal Sevran
I did a sloppy job, I think Mamy Blue was too open already and I didn’t emasculate her properly, so even if this worked there’s a chance it’ll be a selfling. I’ll do better next time.
Still I’m surprised to see she set a hip. Sorry for poor quality, my phone seemed to want to zoom in on anything but the hip. 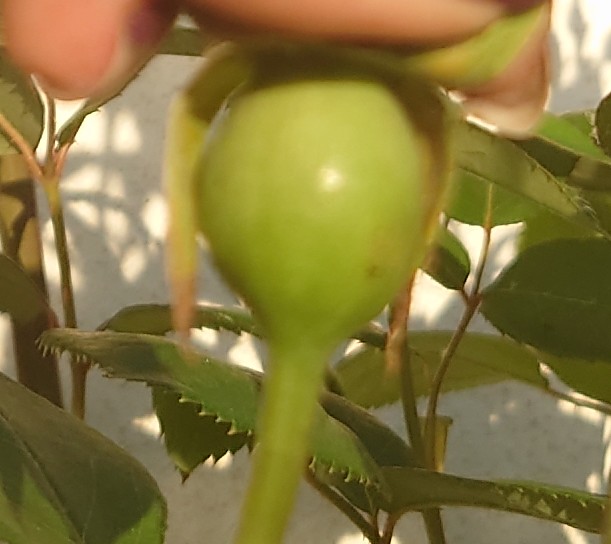 On HMF I see there has been one use of Mamy Blue as a pollen parent but none as a seed parent. There’s no info about Pascal Sevran’s fertility either way, or anything about his lineage at all, frustratingly.
Has anyone tried playing with this one? Does anyone know if she’s fertile as a mother or if I should just get rid of this hip?

Absolutely don’t discard that hip. YOU may be the only one to have tried it this way. Worse comes to worst, you can post to the Comments section on its Help Me Find rose page that you tried and what the results were. Or, it may result in something fun! Fingers crossed!

What Kim said. You may just be the only person who’s tried or mentioned it. May not have had a big distribution/been popular, etc.

Thank you @roseseek and @Plazbo for your quick replies!
I will leave it on and see if anything comes out of it. I will report whatever happens here and also on Mamy Blue’s HMF page.

She’s still making new buds, and her neighbor Huddersfield Choral Society is about to bloom too, so I might try that one on her as well, just to work on my technique before I set out on the crossings I actually want to make (Hulthemia with Rugosa).
Thanks again so much to both of you!

You’re welcome! ALWAYS plant seeds from anything which has no documented use and report what you find. I’m sure many have been tried but since the results weren’t what was sought, no reports were made about them. It’s worth trying everything you grow to see if they work in both directions. You never know if you are going to discover something potentially much more useful than what everyone else is using.

Not sure if this will mean anything for later success/failure but, I wanted to report here that I followed @roseseek’s advice and expanded my experiment.
I am in the middle of attempting the cross both ways between Mamy Blue and Huddersfield Choral Society, and one thing that is obvious right away is that a single flower of Mamy Blue gives easily three times as much pollen as FOUR flowers of HCS.
MB has a crazy amount of anthers, and they give TONS of pollen, fast.
HCS, hardly: I had to gather lots of flowers to get a decent amount of pollen.
I guess because of her name I had assumed Mamy Blue would be a mother (silly I suppose), but I’m definitely going to be trying her as a pollen parent on more things.
Thank you for your advice, @roseseek! I feel like I am getting to know a whole new aspect of my garden roses.

Yes, that’s something you’ll find very interesting. Some release dust storms of pollen very quickly and easily while others require being ground in a mortar and pestle to release any. Some create much and others create little to none, and you have pretty much every permutation of none to vast amounts and releases easily to requiring being ground to release. It is interesting and fun discovering which falls where. Then, you’ll find the characteristic of dust storms of pollen with little to no fertility, such as with Secret Garden Musk Climber. It makes CLOUDS of material. Peter Harris studied it for me under magnification and reported he found “very few cells” in it. Others, you will find, are so fertile, it seems all you have to do is walk by another rose with one of their flowers and they are all fertilized. It will be interesting watching you discover and select your favorite “studs”.

Thank you @roseseek!
I am happy to report that the cross between Mamy Blue and Huddersfield Choral Society has taken both ways, and a hip from the crossings is growing on each.
As for that first hip on Mamy Blue, it just keeps getting fatter. Here she is one month in now: 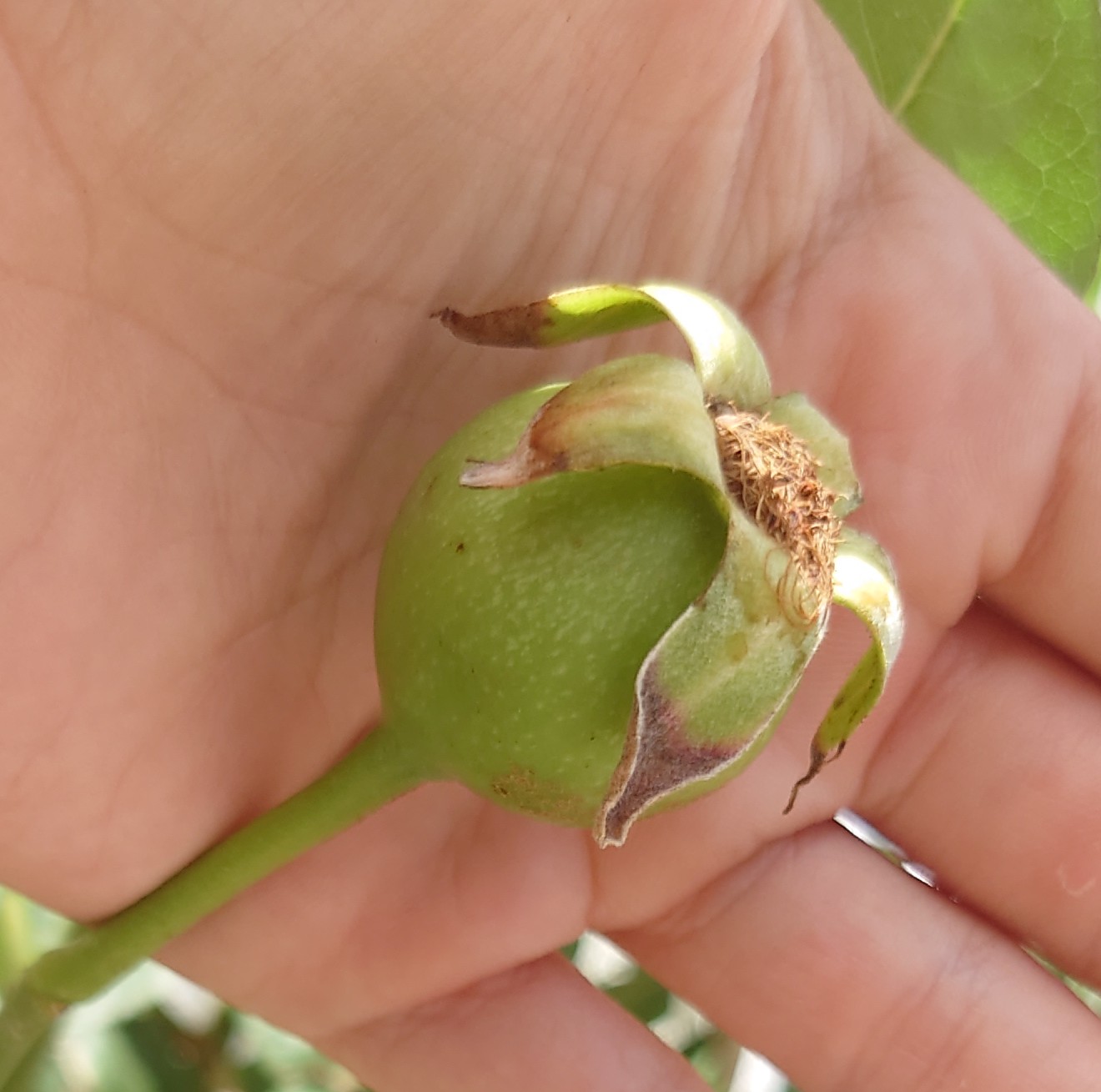 As I understand it, having hips doesn’t mean that any of the seeds will germinate, but for now, I’m happy to have gained a better understanding of the pollenization process, and I’ll just focus on getting both plants to survive and keep their hips during our blazing hot summer before harvesting in the fall.
I don’t know if this makes any difference, but I chose to pollinate flowers that were growing lower on the rosebush, so that the hips and their stems will be shaded by the rest of the plant’s foliage and hopefully they won’t get sunburned. I hope this will turn out to be a good call.
I’ll update with results, or lack thereof, as the season progresses.

Congratulations! I would strongly suspect both hips will have decent germination. Mamy Blue’s “mom” has several successful breeders in it. Huddlersfield is bred from Blue for You and that thing is a weed! It’s seeds germinate beautifully. There shouldn’t be any reason not to expect some seedlings from both hips. 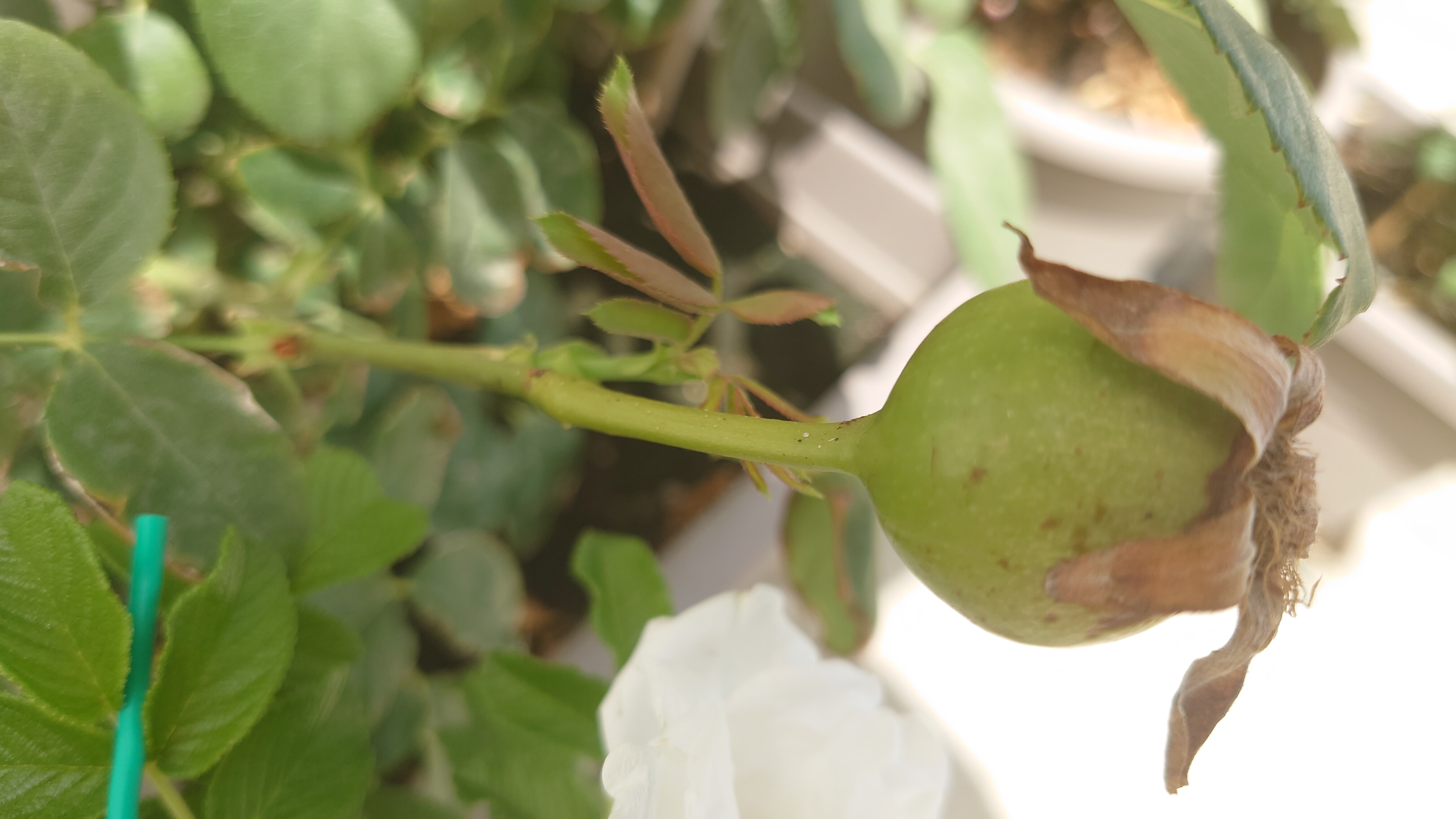 Then today (day 67) I checked and both the hip and stem were blackened. I barely touched it and it fell off.
Forgot to take a pic when it was intact but I opened it anyway. All dry inside with huge blackened seeds.
I cracked one seed after the other open and they were all dry, woody and empty. 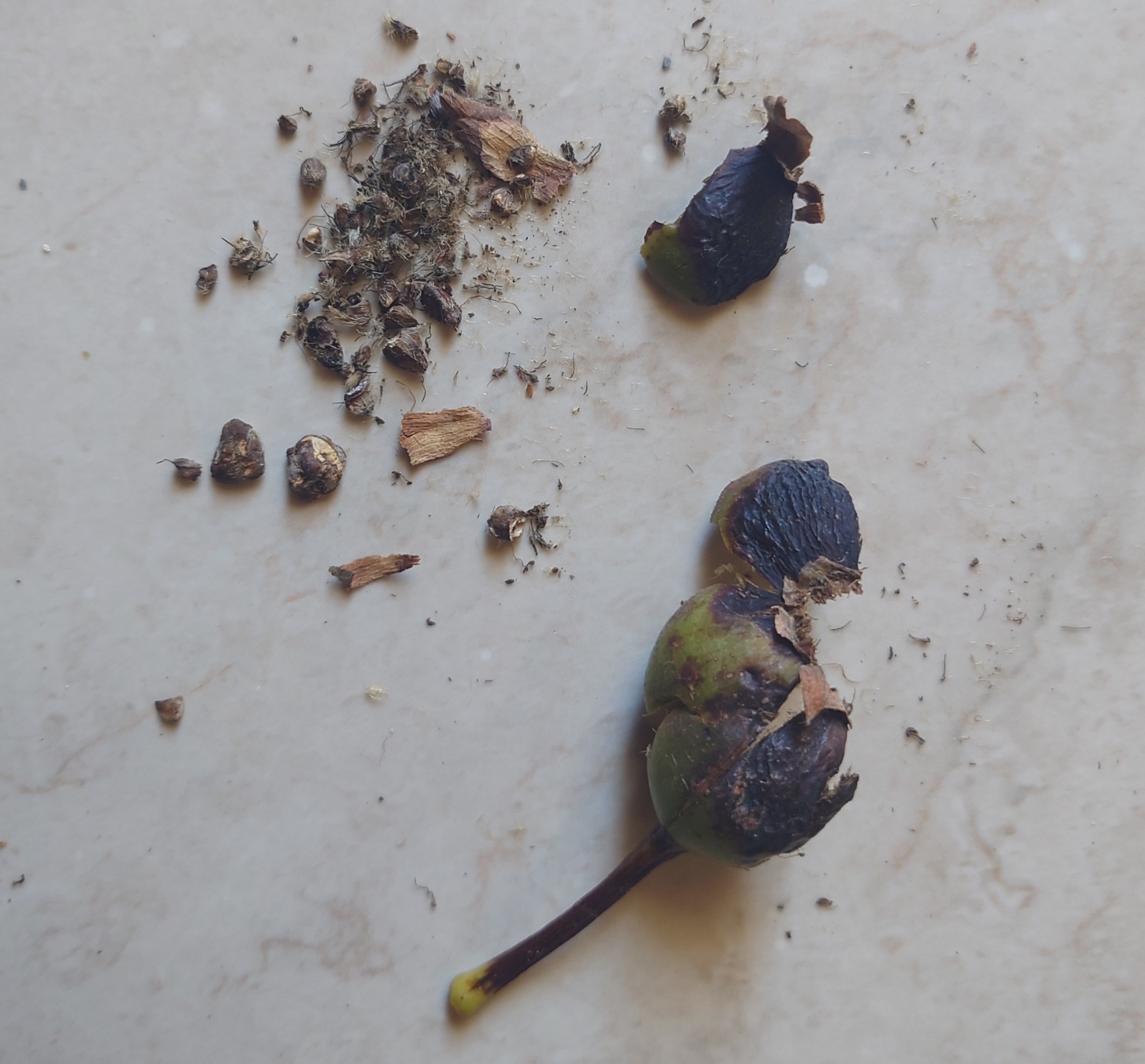 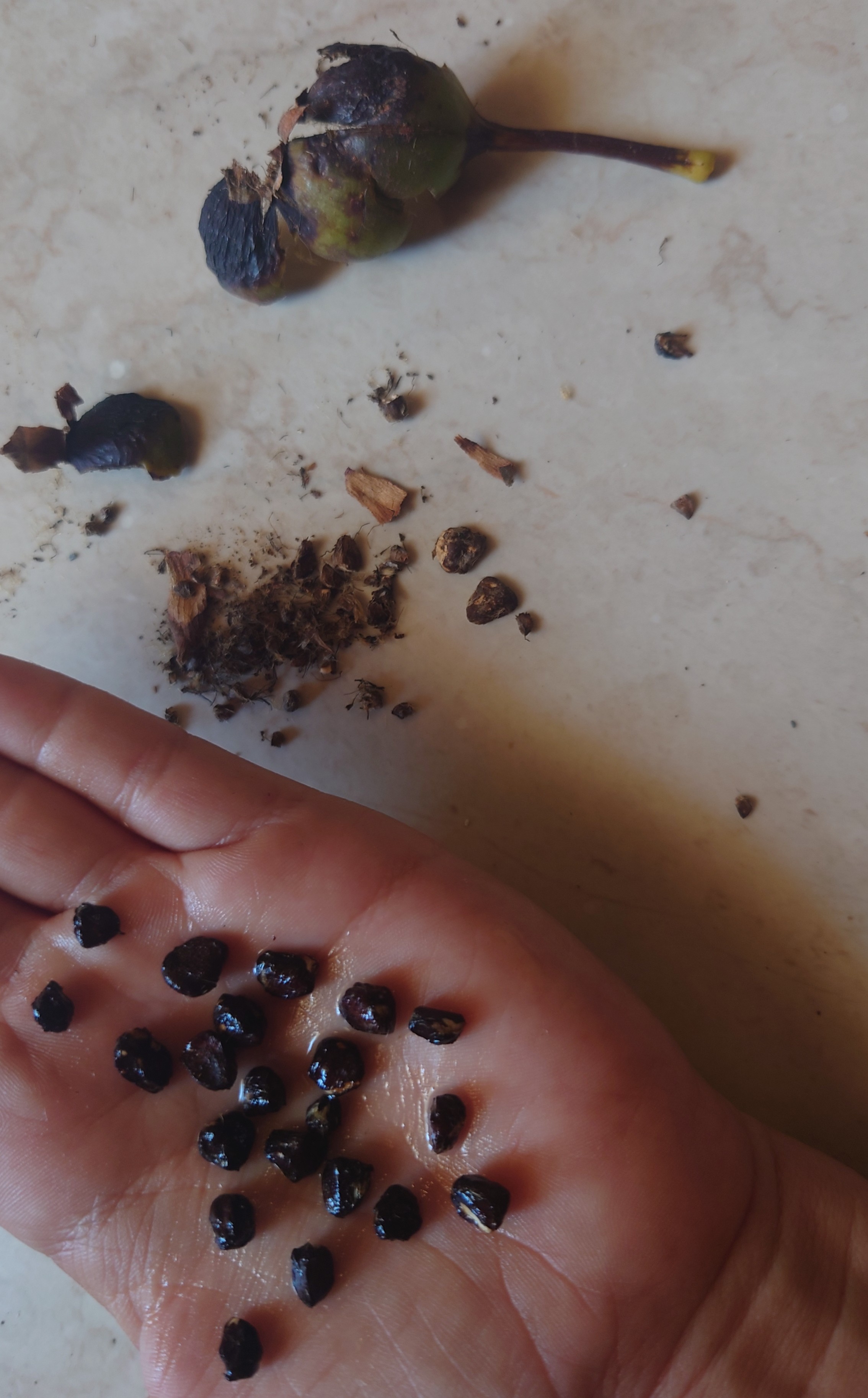 Bummer.
She still has two hips on, one OP and one from the cross with HCS.
It’s been very, very hot (38-40°c for the last three weeks). I don’t know if that was the cause or some kind of fungus.
I hope the others won’t turn out the same.

Update: well, MB definitely sets hips, both on her own and with the Huddersfield Choral Society pollen. The hips get big fast and tend to stay green.
This lack of color change may be because they need to be harvested just around 100 days or they invariably start to shrivel up if they are left on for any longer. I tried leaving mine on as long as possible but after 100ish days it was all downhill. Large seeds, 8-16 per hip.
I’ll update later with germination info, and hopefully pics of some babies.

Mamy Blue’s seeds were huge, and so far the one that has germinated is also huge.
Compared with the seedlings of my other crosses, this one’s stem is at least twice as thick, and growing very fast.
I hope more will germinate. Seems everything is waking up these days.
MB×HCS: 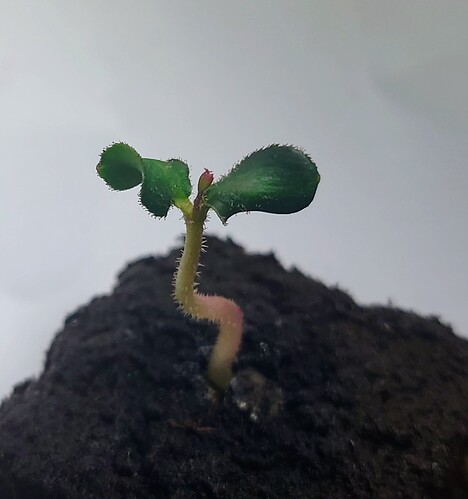 Great ! My Congratulations. A very interesting cross. This seedlings looks truly very powerful, a very important attribute to achieve a promising novelty. Pls keep us up to date.

I will definitely post updates here… But at least now I have an answer to my original question: Yes, Mamy Blue can be a seed parent!