Luther Burbank : his methods and discoveries and their practical application

This series is essentially a how-to encyclopedia of everything Luther Burbank knew, or thought he knew, about everything and how it relates to plant breeding and plant propagation. Published in 1914 it has elements that make it both modern and archaic at the same time. Dipping into the contents gives one a sense, also, of how it is that he managed to generate so much controversy and that he seems to be deliberate in doing so.

Take, for instance, the section in Volume 3 on grafting which begins with a discussion of arterial grafts in humans and animals and goes on for three pages before he gets to plants. A taste:

“Even when the trans-planted tissue consisted merely of a piece of artery, it was found that the graft did not take kindly to its new surroundings, unless the animal were of the same species as that from which the artery was taken. Something inherent in the chemical composition of the tissues themselves makes every fiber of the tissue of a cat, seemingly, more or less antagonistic to the tissues of the dog. We have already seen how the experiments of Dr. Nuttall, of Cambridge University, demonstrated that the quality of felineness or canineness, so to speak, penetrates to the last drop of the blood; so it is not surprising to find from this independent source that the same characteristic differences extend to the solid tissues. And of course I am at once reminded of the similarity of experiences of the grafter of plants.”

Burbank was the author but he did not compile the series. From the introduction on the website at the University of Wisconson, Madison which hosts the archive:

“Luther Burbank: His Methods and Discoveries is a 12–volume monographic series documenting Burbank’s methods and discoveries and their practical application, prepared from his original field notes covering more than 100,000 experiments made during forty years devoted to plant improvement. Created with the assistance of the Luther Burbank Society and its entire membership, under the editorial direction of John Whitson and Robert John and Henry Smith Williams.”

Don, Thank you for making this work accessible to us! A fascinating character, equal parts scientist, showman, entrepreneur, and inventor, he really was a product of his era. I have always been interested in he willingness to try anything, applying an almost Henry Ford-esque attitude to mass produce crosses to reach his hybridizing goals. It is also interesting how the limited knowledge of genetics of the time was employed for practical ends. Of course, his casual extension of these principles toward the people who were immigrating to the US at the time is deeply troubling to me, but we are left with an intact view into a dynamic time in our history. -Brian

Burbank was one of my childhood heroes. I first read about him in the Golden Book Encyclopedia when I was in 2nd grade. My mother bought this encyclopedia one volume per week from a local supermarket. Thus, I learned about Burbank before Darwin. And I have been to the Burbank house several times, and one or two trips to his Sebastapol place where I saw the truly gigantic Royal Walnut. The last surviving Paradox Walnut at the Burbank House almost died from a fungal infection, leaving it far less impressive. And the layered branch that stands beside it (last time I was there) is not growing as fast as the original hybrids.

I have read and studied Methods and Discoveries for many years. Some of his examples I have yet to try (e.g. Ferraria x Tigridia)

One warning: at least one of the editors had a bad habit of writing in the first person, expressing his own opinions as though they were Burbank’s. 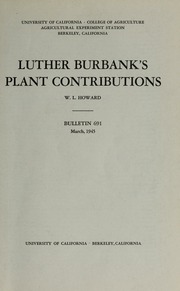