I am curious - are the terms “proliferation” and “bullhead” as relate to roses two different words for the same thing (i.e., a rose sending new growth (mainly buds) up through the center of a flower)? I always just assumed that “bullhead” was the less-scientific term. However, I’ve read some Japanese sites that seem to say that the two are actually different conditions, but there doesn’t seem to be any consensus. If they’re not the same, could someone please explain the difference?

I’ve put some pictures here of what I think of as bullhead/proliferation… do folks agree?

Bullhead or Balled, both describe a rose bloom that can’t open mostly due to weather conditions.

The bloom opens partially and then just remains that way until it rots.

Some roses, like tight balled old roses, will suffer in an overly damp spring and literally rot on their stems without ever opening. Some years it’s unavoidable

Oh my goodness, that is quite a messy rose bloom! I would say that is more proliferation" than bullhead. I have a few seedlings that the bloom gets real tight and when they open the bloom is some what deformed. I thought perhaps I was feeding them too much nitrogen/fertilizer. If they do it second flush then I will toss them.

Very beautiful photos Peppa, of a very bizarre and confused rose! I have understood the terms to be as Meg stated.

Thanks very much for the clear description!

I didn’t realize that bullhead and balled were the same thing and were distinct from proliferation - there seems to be confusion among some Japanese sites I’ve visited as to the meaning of these terms, with some folks calling “bullhead” what, by the description of symptoms, is seemingly “proliferation.”

And on the topic - are there roses that are particularly prone to proliferation? Rouge Royale, for example (the one in the photos), seems to have this happen frequently, along with The Prince. Several of my new seedlings also often have their first flowers open in this kind of state.

I don’t think I’m over-fertilizing (since I’d heard that doing so can cause proliferation), so I’m wondering if there are just some roses that are more prone that others.

Interestingly enough, I just found this (link attached, reference starts on the bottom of page 333):

"Bull head: Bull head is also a common physiological disorder in roses observed mainly in low temperature during night. It occurs due to abnormal production of cytokines and gibberellins, the hormones responsible for cell elongation and stem elongation.

Balling: The inability of a bud to open into a bloom due to excess moisture causing the petals to stick together is called balling. It usually occurs. in areas with coo., damp nights. Roses with many petals are more susceptible to balling."

So maybe they are slightly different? I have to confess I don’t really know much about cytokines and gibberellins, however…

My understanding of ‘bullheading’ which I had never encountered before last year (live in sunny San Diego county) was that it was due to cold nights, esp. when the nights should be warming upand buds were forming. Both last yr and this yr have had cooler than usual PM’s, and I saw a lot last yr, but only a few this spring.

You mention Rouge Royale as a proliferation repeat offender. Another that may have been taken off the market is Austins’ ‘Queen Nefertiti’. That rose gets ugly in our winters. There is another Meilland red, similar to Rouge Royale that does the same thing. I think this is also due to blooming through cool nights as I have seen them mostly in winter. I have a seedling that is an extreme double that did the same last winter, but is again blooming normally. Queen Nefertiti is gorgeous when the weather is to her liking.

Don Holeman posted this link sometime last year, and it is an interesting explantion of vegetative centers–it’s been sometime since I WATCHED IT, so it may be one of a group of informational lectures explaining the formation of flowers. 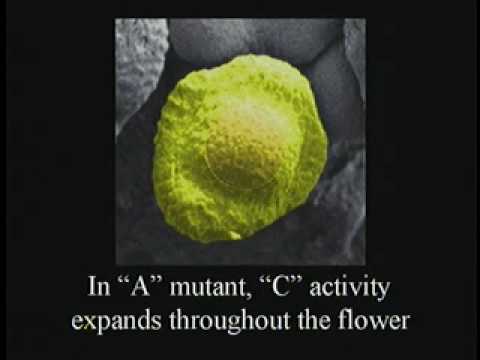 Yes the model ABC Model of flower formation genes is this like:

Here in this flower its perhaps realised without mastergene C in the middle:

and then C is missing in the center:

The pure A in the middle is simply achieved by overshooting concentration because of the missing of C, while B does not reach so far.

Sorry to take so long to respond…

Jackie and TreasureTrove, thanks very much for the video link and the summary of the contents. It was quite interesting stuff.

Jackie, as to bullhead, when you saw your plant, what did it look like?

“Symptoms: Buds have a flat-topped appearance instead of the pointed tip normally preferred. Flower buds are larger in size and weight, have many short petals and petaloids, and have a profusion of secondary florets bearing carpels near the base of the flower.”

(Interestingly enough, this rose, ‘Wedding Cake,’ has bloomed like this all spring.

Did your bullhead rose look like one of these?

I found a photo on the Garden web rose forum that looked very much like what mine looked like. I believe your photo of Wedding Cake is pretty much typical, more of less, of what it usually looks like when the weather is either to hot or to cold. This may be one of the ‘proliferation’ with a touch of bullheading originals. Paul Bardons’ “Old Roses and Beyond” blog has a beautiful photo of Wedding Cake at its’ best.

Obviously the two conditions are somewhat related and symptoms probably overlap. I believe that bullheading is a condition that could strike most any rose given the right weather conditions, whereas proliferation is something that some varieties of roses are prone to during cool season bloom.

Jackie, thanks for the link! A picture is worth a thousand words!

Paul’s Wedding Cake is very nice, too. This spring was especially cold and wet here, so I guess the rose wasn’t happy about it.

Thanks for all the information! I’m glad that my puzzle is solved!