I am a new member.

Hi, I am a rose enthusiast who would love to try some hybridizing, I would like to know about some of favorite seed parents. Any help is welcome.

Welcome, May! (or insert your name here if it’s not May)

That’s kind of a broad topic, because there are so many people here with widely divergent hybridizing goals. Maybe you could start by telling us some of your favorite roses for your climate and how you would like to improve upon them. Then someone here who grows similar roses could chime in with some favorite seed parents.

Welcome, Maywali. Joe’s suggestion is a good one. It wouldn’t do you any good to receive a list of semi tropical types if you live in an arctic winter zone. If you would like to tell us where in the world you live, sharing ideas of roses which might serve you well would be much more accurate and helpful.

Thank you for your replies.

I live in Rockland county NY but am moving to Munich Germany in a few weeks, I think that is zone 6. I will be able to use my mothers garden a little until I get my own.
My dream is to create a garden with lots of fragrance and wildlife and if I can also cross some of these
s roses as a hobby that would be great.

I am interested in working with Rugosa roses. My goals are health and fragrance ability to rebloom would be nice, the colour and shape will be fun suprises or if anything grows at all!
here are a list of roses I am interested in and like,

I have not grown all of there only a few but they are roses of interest to me, Some of the crosses that interest me I have no idea id at all possible and may be absurd so I am asking for help before I waste time even trying a rose that may not be fertile
for example, a rogosa with a damask or rose the recht.
Forgive my spelling and thank you in advance.
May

I can tell you a little about most of the older ones, but I haven’t bred rugosas myself. I can’t tell you which are most likely to produce reblooming offspring when crossed with rugosas, but some of the folks here who have bred rugosas might be able to address that issue.

La Reine: Sets big hips (~20 seeds), and was seed parent to a whole lot of the HP class, with thousands of descendants since. It’s a plant that’s known for turning yellow any time it’s unhappy with the soil, so you’d probably want to cross it with something robust and healthy. It passes rebloom along well.

Rose de Rescht: A poor seed parent, producing not too many hips, and none with more than a couple of seeds. If you have a good seed parent available (like most rugosas), I’d encourage you to use Rose de Rescht’s pollen on it, and to skip trying the cross the other way.

Autum Damask: Sets hips a bit more reliably than Rose de Rescht, but still can’t average 1 seed per pollination. While most of its seedlings are pretty healthy and strong, it takes an awful lot of pollen and work to get intentional crosses out of it. I’d encourage its use as a pollen parent, and since it’s half cinnamon rose, I suspect that rugosas might accept its pollen pretty readily.

Apothecary’s Rose: This has been a reliable breeder for centuries, making around 5 seeds/hip with pretty consistent setting. Tuscany Superb is maybe a little bit better, if you don’t mind some darker reds. While 4-8 seeds/hip is only middling production from a seed parent, gallicas have been known to cross both ways with a really wide range of roses, so I can’t think of any reason to not try it with rugosas.

Reine des Violettes: Like all of the above, has fertile pollen. Sets hips, too, and while I can’t give you a seed/hip count, is reputedly acceptable in that respect.

As for how to cross them, I’d point out that all of the above roses are presumed tetraploid, and most rugosas are diploid. Most rugosas are also outstanding seed producers, and not prone to being very self-fertile. Although the usual approach to a crossing a species is to put its pollen on a fertile modern (or other hybrid), I’d also try the opposite in this case. Without getting too deeply into the ploidy issue, putting tetraploid pollen onto a diploid flower seems to have an edge with regard to producing especially vigorous triploids, relative to putting diploid pollen on tetraploid flowers. Both approaches can (and have) worked on countless occasions, so I wouldn’t say to not try it both ways, but with some of the less productive seed parents, like the Damasks, I’d definitely try rugosa x damascena first. That might get you >40 seeds per pollination, which beats the heck out of the <1 seed you’d get doing it in the opposite direction.

Thank you Hardy for your informative and directed response, very much appreciated and it has certainly given me substantial areas to explore.
There was one more item I wanted help on and wondered if you knew of a good resource for determining ploidy of roses
Thanks
May

Most of those, for which ploidy is known, have that information posted on their rose pages on Help Me Find-Roses. “Ploidy” is interesting, but there are far more important factors governing hybridity than the number of chromosomes and whether they match in a cross. Some of the most fertile breeders around are triploids.

Thanks also to Hardy_ for the cogent post. It reminds me that I grubbed out my Apothecary’s Rose this spring, but it’s memory lives on in a bunch of seedlings that have great vigor and bushy habit. Unfortunately most won’t bloom in my climate unless we have a mild winter with good snow cover, but I like to think there is some potential for using the Apothecary’s Rose.

My young Tuscany Superb got nipped last winter and couldn’t bloom this year, so it’s possible (though a premature judgement) that it is slightly less hardy than the Apothecary’s Rose. People might point to Alika as a hardier gallica, which it is, but it also gets some fairly horrid blackspot.

If you want to breed Rugosa roses, the key one to use is ‘Schneezwerg’. Works best as a pistillate parent. Much more work can be done with it with other Rugosa cultivars and even other types of roses.

Hello May - I’ve had successful Autumn Damask/Rosa rugosa crosses in both directions. The resulting seedlings generally look like the seed parent with the thorns or bristles of the pollen parent. The few that have flowered to date have been singles, but do repeat. (The presumed 1/3 damask once-blooming gene has not shown up in seedlings so far.) These crosses make for very attractive plants, in my opinion. I’ll post a couple of photos…

As the seedlings from the second year of this cross settle in, I’m thinking this plant was mislabelled somewhere along the way as having Autumn Damask as the seed parent. But anything’s possible… 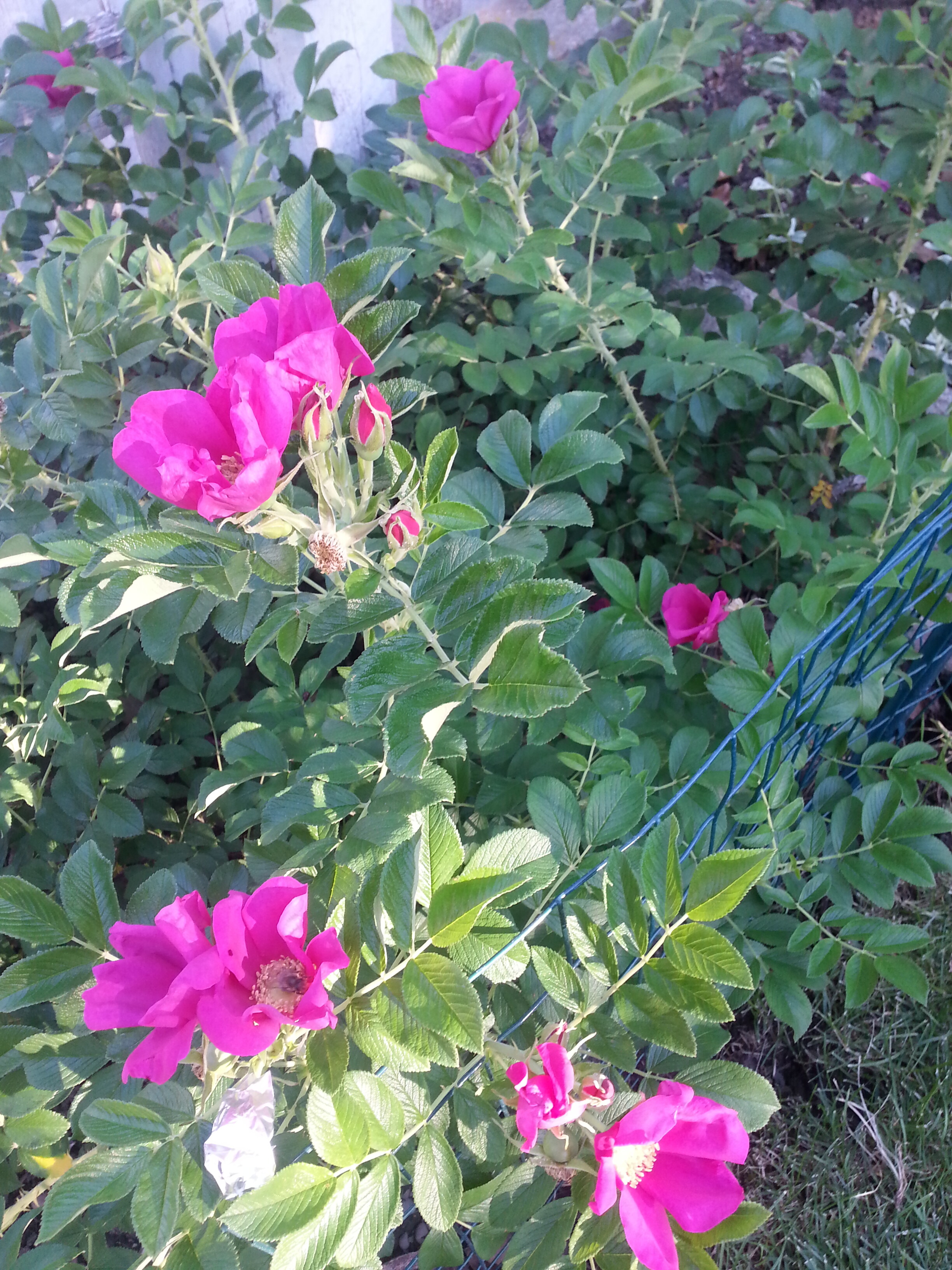 This Autumn Damask x Rosa rugosa shows more of the rugosa influence, to my eye. 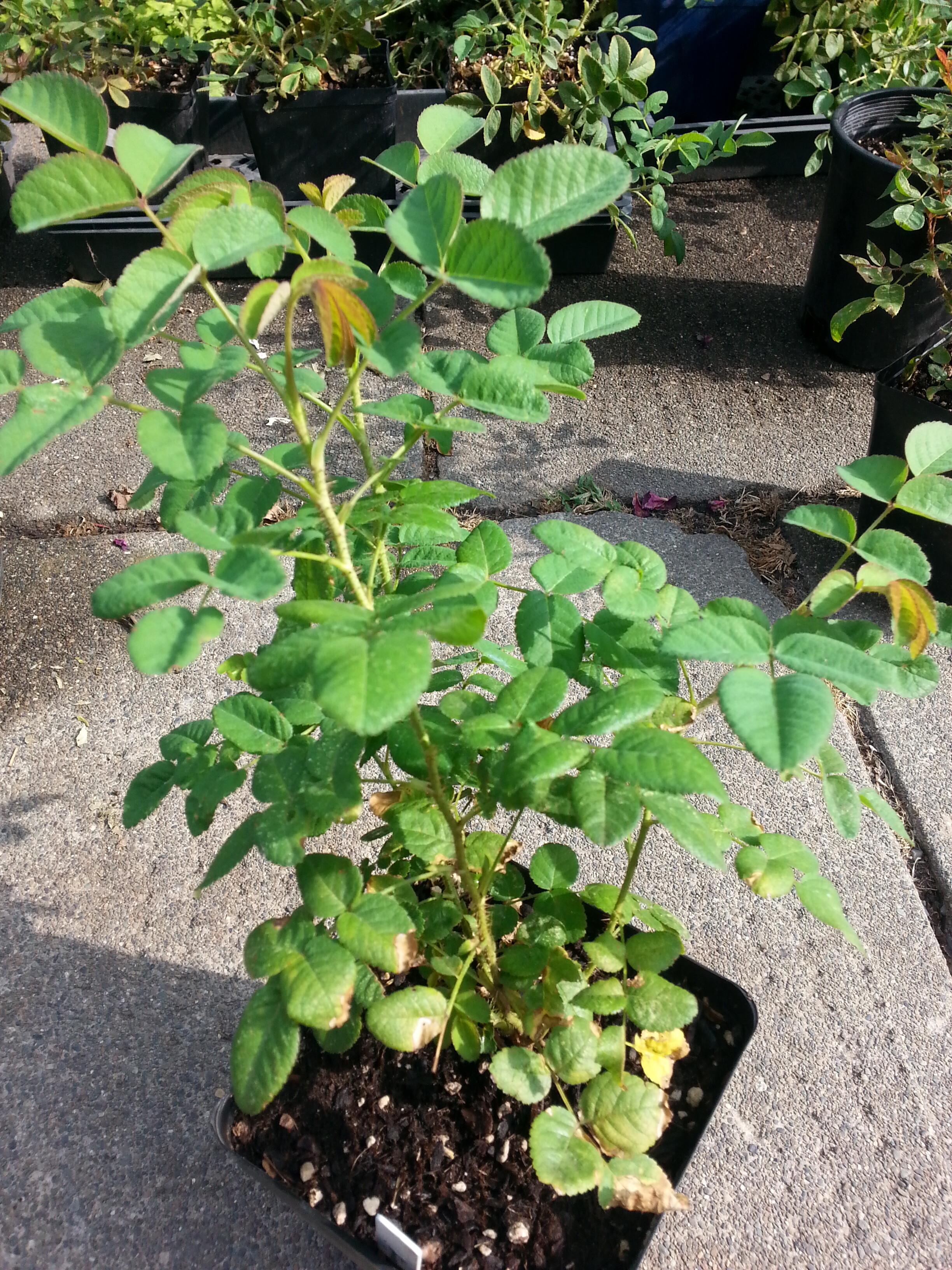 Nice! I admire your patience in getting seed out of AD.

It does look quite a lot like most of my AD seedlings do, despite none of them having a trace of rugosa. A bit brighter green, and a bit longer leaved, but the Damask look clearly wins out. Having read about how Desprez grew out thousands of seedlings of Rose du Roi without obtaining a single repeater, this might be the easiest route to something that could be called a Damask Perpetual, and if they get some rugosa health out of the deal, what’s not to like?

Hi Hardy - The Autumn Damask x R. rugosa do look (a lot) like the seed parent. It may not be evident in the photos but the leaves are more corrugated than AD and have a rugosa-gloss appearance more than an Autumn Damask matte. Also, AD passes on reddish prickles, which (I hope) are evident in this photo of a R. rugosa x AD hybrid and absent in the opposite cross. I’m insecure in the presence of Nature, who is really good at this kind of thing, that I know what I’m doing, so I appreciate any prompts to think these reuslts through again. Thanks! 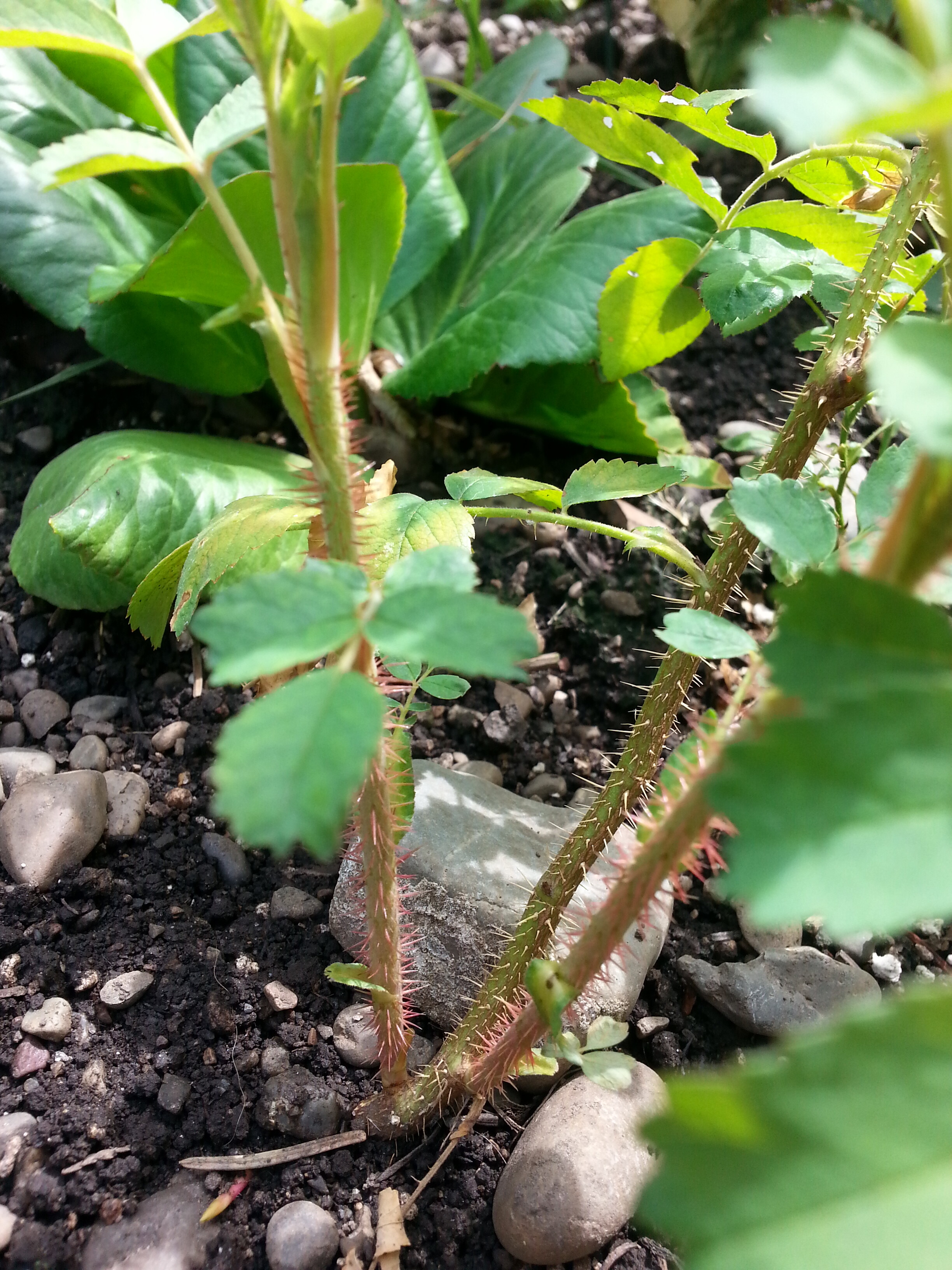 Thank you, this is very helpful and gives me a good insight. The seedlings look very healthy and the blooming one is very nice,is it fragrant?
Have you got any experience of Moje Hammarberg? THANKS AGAIN

The hybrid blooming in the photo is quite fragrant - less rugosa/clovey than damask/perfumy.

Sorry, but I haven’t grown M Hammarberg - or many other roses, for that matter. I used to be more of a collector, but as I began hybridizing, I quickly ran out of room. Some hybrids (species and near-species, anyway), may not bloom for three years. I’ve eliminated all but about a dozen roses and hybridize only a few each year. I’d recommend not overwhelming yourself at first and working with a few roses that you love.

Yes I think you are right and I think maybe crossing rugosas may be a bit too ambitious for me. I will still grow some in my garden as I love them, however I am going to try maybe Queen Elisabeth or La reine as seed parents and maybe Rose de recht as pollen,
I also like westerland but hear it has low germantion so maybe as pollen parent.
What do you think? Will this be viable.