I’ve read some old strings regarding hip ripeness, but they’re from a few years ago, and links that were offered are now dead. I’d like to reopen the discussion.

I pollinated an Austin rose with pollen from a Buck rose in June, and a nice hip developed. It’s been almost five months, and the hip is still green, which is probably normal for the Austin rose. The peduncle is still thick and healthy, with no signs of shrivelling.I’m wondering if I should harvest it now, or wait until just before the really cold MN weather sets in?

Go ahead and harvest it now. Hips of most modern roses will have viable seeds after approximately 3 months. I’ve had a few viable seeds in 2-month hips. If the rose does not get a lot of sunshine, a longer period may be needed, but usually 3 months is adequate. Germination seems to be better if hips are harvested as soon as color change has begun.

Hips of roses with high percentages of species parentage may have ripe seeds after 6 weeks or even less, so be on the lookout for color changes and peduncle shriveling in these hardy roses.

Thanks! I appreciate your help!

The Austin rose is in full sun.

Hi Tony, I’m not sure what latitude you are and how much more “summery” weather you can expect.
Here on the Canadian Prairies. The day time temperatures have dropped to plus 3 deg. Celsius. I was facing the same problems you have. Fellow RHA member Doug Wild of Alberta suggested using containers with damp sand covered in clear plastic bags and placed in a warm sunny spot, like a south facing window.
I improvised, by replacing the plastic bags with plastic pails. Doug suggest doing this for three weeks.
Chuckp 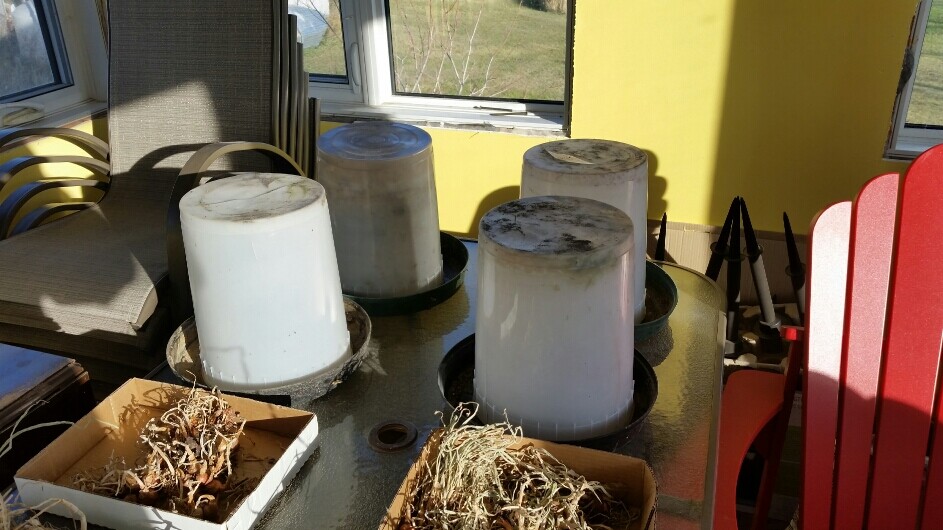 Thanks ChuckP! I’m in a similar situation to yours. Southern MN prairie with highs in the 30s F. Are you saying to harvest the hips and then place them in the conditions you mentioned?

Hi Tony, harvest the hips as you would cut flowers, and stick the stems in the damp sand. As you can see
in my picture, I used one gallon pots with a trays under the pots. This way I can add a little water without disturbing the stems.
The leaves may go mouldy, but keep an eye on the hips. This seem to be working out for me.
PS: The credit for this idea goes to Doug Wild of Alberta.
Chuckp

When I was interviewing Will Radler several years ago I mentioned waiting until the hips appeared ripe and his response was “why?”. I took that to mean that he’d had success with seeds from green hips. I can’t remember the specific details of the conversation, but I’ve decided not to worry too much about apparent hip ripeness. My own data is incomplete and based on intuition because I usually find some other way to kill my seeds, but my feeling is that often seeds from quite green hips will germinate well.

I harvested the shoot that has my hip on it last night, and it has started to color up a little…a slight orange tint to the green. I don’t know if it’s from actually ripening, or if it’s from the mid 20s F nights we’ve just had over the past few days. Regardless of the cause, should I still go through that three week period, or harvest the seeds now?

I agree with Peter that if the hip spent five months on the plant the seeds are quite likely to be ready. Harvest and place in moist stratification without allowing them to dry out. Optional warm stratification period followed by months in the fridge.

Thanks everyone! I’m going to harvest those seeds today!

I have another question for everyone, regarding this research done in China:

Most of the achenes produced by Rosa multibracteata Hemsl. & E. H Wilson are dormant on maturity and require pretreatment to stimulate germination. To…

Does everyone think that the long, dry pretreatment for the seeds of this species that was successful in this study is beneficial because this species and/or population has adapted to the arid conditions in the area where it grows, or would this pretreatment be successful for all roses?

Bracteata is a hot zone rose so the dormancy issues are different from colder climate roses. Even supposing these guys are on to something - I doubt it - you would not want to generalize.

Rose seeds are pretty mature at 105 days of summer light and temperatures. They benefit a little from longer gestation but the longer they stay on the vine the more abcissic acid precursors they build up so the harder it is to get them to break dormancy. Again, generalizing is risky but, for modern hybrids it is a pretty good rule of thumb. Some species like omiensis and spinosissima can be ready after a couple of months.

This from the breeder of ‘Radiance’:
HORTICULTURE 2(20): 495-496 (November 11, 1905)
Rose Hybridization
John Cook
It takes from four to six months to ripen the seed. When the stem of the hip begins to get yellow then the seed is ripe, take it off, wash the bulb and put it in a pot in sand, which is to be kept wet, and in a short time it will be rotten, when the seed can be washed out, and sown at once, before it gets dry. If the shell gets dry, it gets harder and consequently it takes longer for the seed to germinate, which takes usually from three to ten months. The enemies of the seedlings are snails and other insects and mildew.
http://bulbnrose.x10.mx/Roses/breeding/CookRoseBreeding1905.html

May I suggest that you go to the RHA main page and download my long review on rose germination. It cites about everything written and peer reviewed, plus a lot that’s not. von Abrams and Hand showed that ripening in cold weather lowers germination. Workers at USDA (Semeniuk and others) showed that there are different kinds of dormancy. Once a seed gets into a deep dormancy it may take a lot, like 2 full cycles of cold and warm, to get germination. For some species, dry storage up to 8 years increased germination %. So it depends what you pollinated with what and how cold it actually was when you were trying to ripen the hip. My inclination would be to take a generous cutting, pot it up with rootone or such in a nice damp medium cover with a plastic bad and put under lights in a warm place. It will ripen there. I have done that. Ralph Moore used a shortcut for minis by just bagging them up and setting in s well lighted place. Sun can overheat them in his climate of Cal. The act of cutting stem stimulates ethylene production which hastens ripening. Many of Radler’s roses take dreadfully long to change color and have low germination % anyway. Mature green hips seem to work as well as orange ones with some of his productions.

Thanks Karl and Larry! I appreciate the help!

In addition to hip ripeness, it appears that seed ripeness may be an issue of some interest. In this experiment, seeds that were allowed to rest (after-ripen?) produced stronger plants.

Sir,—Some time last year I observed in your Magazine, a difference of opinion between two of your correspondents, in regard to the vegetating of rose seeds. I then determined on sowing some of the many varieties, and send you the result of my experiments.

No. 1. Seeds of Rosa indica odorata, or tea rose, were sown on the first of December, 1837, and vegetated in a temperature of between 58° and 65° Fahr., in from six weeks to three months, coming up occasionally during that period; the most of them have now bloomed, but not sufficiently strong to determine their character.

No. 2, of the same seed, and picked at the same time, was kept four weeks in sand, and sown on the ninth of January, 1838, and vegetated generally in seven weeks. The plants grew stronger and flowered better than No. 1, although treated in the same manner.

No. 3, seeds of the same, kept in sand till the first of February, and sown in pots and placed in dung or manure hot-bed, vegetated beautifully in six weeks, temperature from 65° to 75° Fahr., and are now promising, in growth, bloom and character, to surpass Nos. 1 and 2.

No. 4, seeds of Lamarque Noisette rose, collected from the plant in the open air in January, 1838, and sown along with those of No. 3, vegetated at the same time and have grown much stronger than any of the preceding, but only as yet three out of four plants have bloomed, and strange as it may appear, (you know the parent to be a large white,) one of those which flowered is a deep rose color and perfectly double. It perhaps may be desirable to say that the soil used was sand, loam, and leaf mould, in equal proportions, and watered with pure river water.

The difference in performance of seeds that were planted at different times may be related to this:

Botanical Gazette 99(3): 630-665 (1938)
GROWTH PATTERNS OF PLANTS DEVELOPED FROM IMMATURE EMBRYOS IN ARTIFICIAL CULTURE
H. B. TUKEY
Mature or nearly mature seed has also produced unusual types of growth, but of a different nature from those from very young embryos. FLEMION (4) found that mature but non-after-ripened seeds of Rhodotypos kerrioides developed into plants with a dwarfish appearance, and with short, stocky hypocotyls and internodes, and small, dark green leaves. She later (5) reported a similar type of growth for non-after-ripened embryos of peach, apple, and hawthorn. DAVIDSON (1), in culturing immature peach embryos, described all plants raised in culture as abnormal and dwarfish, having small, wrinkled, and peculiarly curled leaves. VON VEH (25) found that seedlings of apple, pear, quince, plum, and cherry raised from non-after-ripened embryos developed into dwarf plants. LAMMERTS (13) secured similar results with apricot, peach, cherry, rose, and camellia; and GERSHOY (6) with the violet.