Harison's Yellow germination - for the record

My Harison’s Yellow set a few OP hips for the first time. I harvested and cleaned them the first week of September, folded the dozen seeds into a damp paper towel/ziploc and put them in the pantry - about 60F. This week, when I gathered them to put into the fridge, half had germinated - three were scraggly ghost seedlings having been searching for light for some time. Having read about the length of time spinosissima can take to germinate, I’ll take nothing for granted from now on.

Wow, that’s amazing. I have never heard of spinosissima germinating so fast. Congratulations! And thanks for a new hybridizing term: “ghost seedlings.” Love it.

Nice work Kevin. The pioneer rosarian Robert Simonet (originator of ‘Red Dawn x Suzanne’) wrote that rose seeds germinated quicker if they weren’t allowed to dry out. I’ll try your method with some other spins and let you know what happens.

Credit goes to the seeds themselves, since I was planning on tossing them in the fridge for a few months, but thanks. It may have been a fluke - we had a cool summer? - but it was a nice surpirse!

It appears Rosa glauca was the pollen parent, which makes sense since it’s nearby and is the least discriminating father on the premises. Glauca genes dominate, in my experience, so I’m picturing a spiny glauca… just what everyone wants… 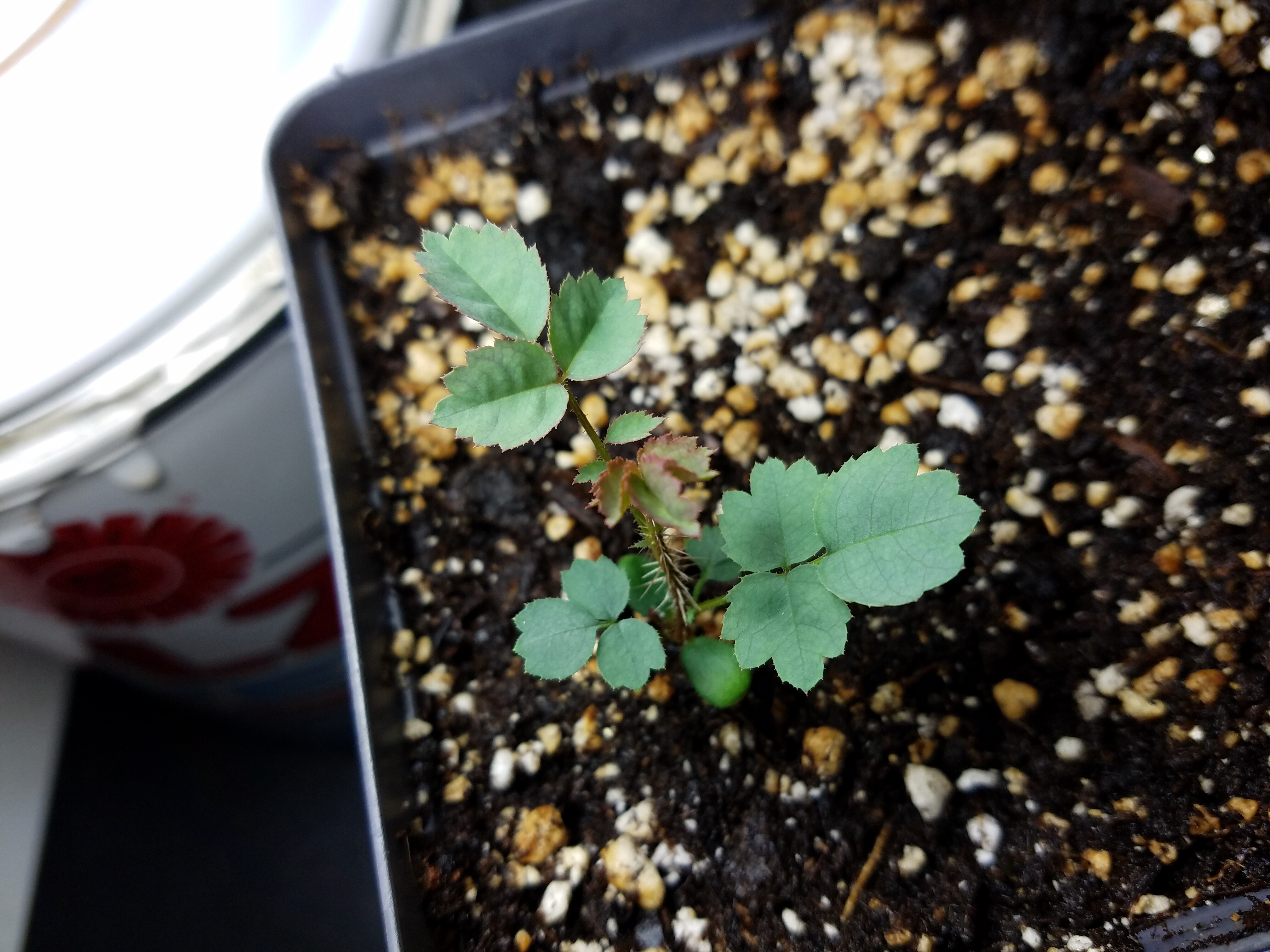 It seems a little premature to file a paternity suit but If they are indeed glauca then any sign of carotenoids in the petals would make the plant a keeper. You would need to plan downstream crosses wisely on account of the caninae mieosis.

Glauca genes dominate, in my experience

Indeed, as do all caninae in an outcross. The caninae are the Borg of the rose world, assimilating other species then out-competing them to extinction. There is a large body of primary literature about the caninae, my favorite paper title being 'Beauty and the Bastards". In addition to those below you should be able to find some less technical articles about caninae mieosis elsewhere. IIRC, there are some relevant items on Karl’s excellent website.

I would like to mention the distinction between hybridization and introgression. The latter does involve hybridization at the beginning, but this is followed by repeated back-crossing to one parent.

But if there are other Caninae-type specimens in the neighborhood to mate with the initial hybrid, the Caninae meiosis could be restored, with new groups of genes borrowed from the species with “regular” meiosis.

Riley (1958), discussing wheat, explained some of the genetic basis for the ability to inhibit chromosome pairing - which is also necessary for keeping chromosomes unpaired in the Caninae meiosis.
http://bulbnrose.x10.mx/Heredity/RileyPairing.html

Of course, none of these are relevant when the Caninae species contributes only seven chromosomes as pollen parent.
Karl

All of which make breeding with caninae fascinating and frustrating. I have some f1 mossed glutinosa hybrids that I’m ruminating over so thanks for these citations, Karl.

none of these are relevant when the Caninae species contributes only seven chromosomes as pollen parent.

We have a paucity of information on breeding with caninae either way.

Thank you, Don and Karl, for the links. I’ll get through them all soon. I’ve read about Caninae meiosis but I always felt I was missing something in the context of hybridizing. In my understanding, Caninae meiosis would provide no genetic advantage as a pollen parent and provide an advantage as a seed parent only in the F1 generation. Without backcrossing to the same Caninae parent, or crossing to another Caninae rose, the meiotic advantage is lost. So, the dominance of R. glauca, for instance, as a pollen parent in my garden is simply due to dominant genes, rather than anything specific to Caninae ploidy oddities… right?

So, the dominance of R. glauca, for instance, as a pollen parent in my garden is simply due to dominant genes, rather than anything specific to Caninae ploidy oddities… right?

I think you need to see solid evidence that glauca is pollen parent. Lots of seedlings look primitive - ontogeny recapitulates phylogeny and, imho, that phenomenon extends into childhood.

I’m sorry, Don - I clouded my original hypothetical question by tying it to anecdotal experience and inadvertently to the concrete example that began this post. I’ll restate my intended question: In my understanding, Caninae meiosis offers no genetic advantage as a pollen parent and no genetic advantage as a seed parent beyond the first generation (barring the later reintroduction of Caninae genes); so, in my understanding, if Caninae genes are dominant in a cross as a pollen parent, it’s due simply to their being dominant genes, rather than a function of Caninae ploidy, and future generations should be expected to behave like a non-Caninae cross. Is that accurate? Hopefully, that’s more clear.

We have a paucity of information on breeding with caninae either way.

The fragrant foliage of the Sweet Brier seems to be inherited only maternally.

Wulff (1959) discussed a triploid derived from Rosa multiflora pollinated by a hybrid, (R. canina x R. coriifolia froebelli). He was mostly interested in the oddities of meiosis in triploids, rather than any traits derived from the Caninae pollen parent.

Having raised, pulled and tossed scores of selfs and crosses of the glauca selection in my yard -which itself is a third generation - I can say this is Harison’s Yellow x R. glauca. The offspring have all been remarkably consistent in color - but all slightly less pronounced than the parent. 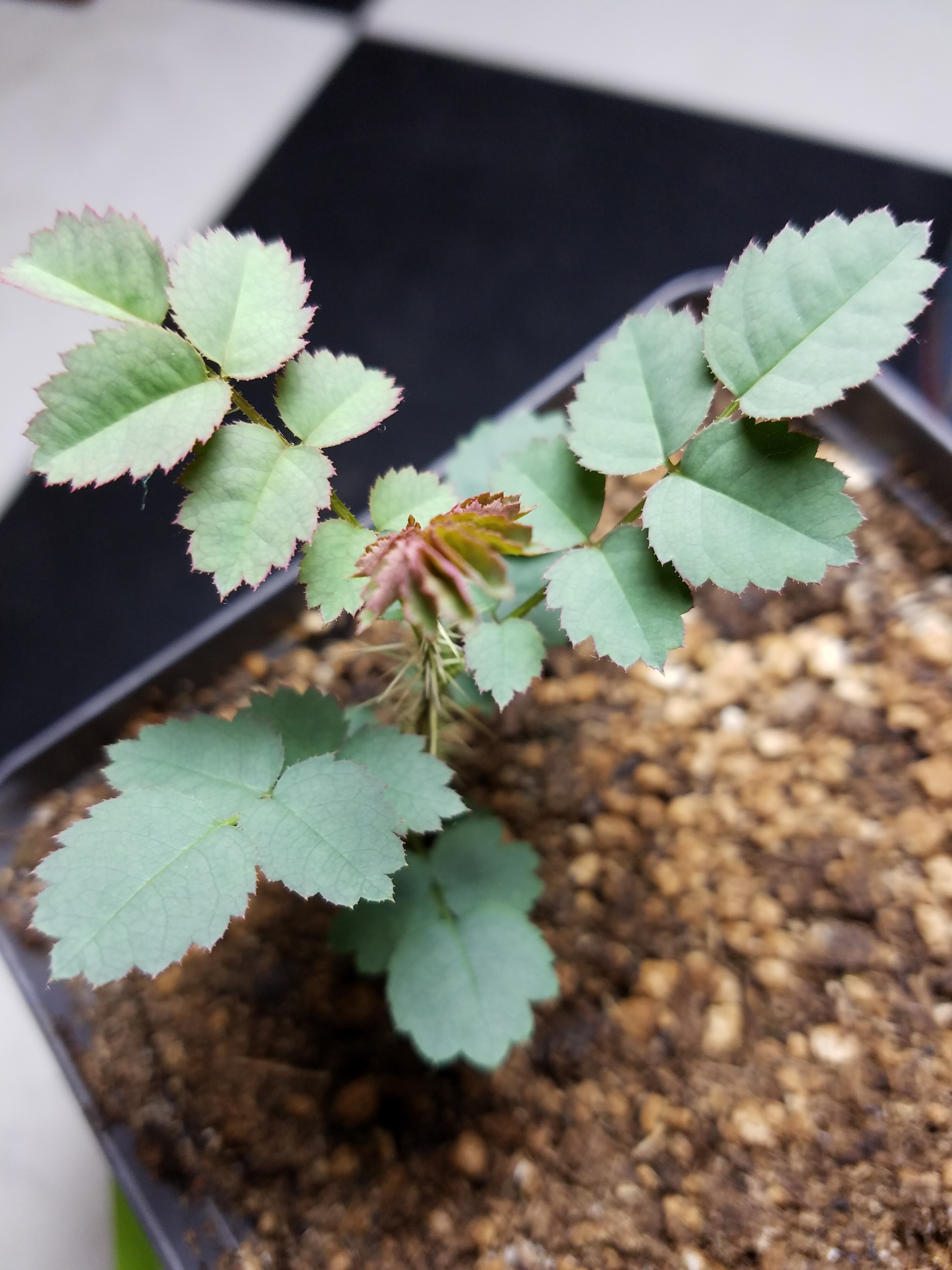