How does one determine whether or not pollen is fertile? This may be a peculiar question, but do the pollen sacs look any different than roses that release a lot of pollen, and are there roses that do release a lot of pollen and yet they are non fertile? I am not referring here to incompatibility nor to non existent stamens and anthers. Is there such a thing as an infertile rose that pretty much looks like it might be a normal rose. This is really a two part question but they are closely related, and a search did not bring up anything.

There are probably several different takes on this. Some roses as you know produce a ton of pollen from a single bloom. Others produce very little, but the pollen is still very fertile. Some roses produce a lot of pollen, but fertility seems very low - many hips fail, while others produce pollen, but it is just not fertile. My sense is that even this later group could probably be coxed to being fertile if you try enough times and apply lots of pollen. In my experience, the appearance of the fresh non-dried anthers is too variable to determine fertility - some look like they should release lots of pollen, but the anthers just dry up and refuse to release pollen. I have had very little luck grinding up these shriveled anthers to try to extract viable pollen.

Thanks, Jim. I have had a little (very little) luck with the grinding up the anthers that otherwise are reluctant to release pollen, and I am aware that sometimes a so-called sterile pollen can be fertile enough under the right conditions-I did get some offspring from a couple of Gemini pollen attempts that were definitely Gemini in origin. This is before I ‘knew’ that Gemini was for the most part pollen sterile. But of course I was hoping there might be a couple of methods for determining from just a visual examination whether a new rose might be a good pollen prospect. I seem to have a seedling from last year that is a super healthy, nice color, good flowers, great foliage and shape, but I just cannot find any pollen in those anthers, and the grinding and macerating only seem to create some kind of dust, just not pollen. So it’s learn from trial and error then, I take it.

There are many vars whose pollen production is very variable and environment dependent.

From plenty of nice fertile pollen to a few mishaped stamens that release nothing.

One such temperamental pollen producers here is Sanguinea that after i.e. late frosts or in summer heat is male sterile while when willing it has nice abundant pollen.

I can’t find it right now but with a micriocscpe you can germinate the pollen with a solution of sugar and boron. The grains look just like seeds! It should be somewhere on the Internet. If I remember it is 15% sucrose solution with 40 ppm boric acid. Johannesp

I did find this “Germination was highest in a suspension culture with a medium containing 0.3?M sucrose, 2.4?mM boric acid, and 3?mM calcium nitrate.” at this address:Viability And In Vitro Germination Of Johnsongrass (Sorghum Halepense) Pollen.

There’s that calcium nitrate again. This is a little more scientific (culture, medium, microscopes) than I usually get into.

Thanks for the info, Johannes.

The Calcium nitrate worked great on the seeds. There must be some regulatory system that if the seed senses a low concentration on nitrogen in the soil it will not sacrifice itself because it would use up available N before it was able to reproduce? Anyone?

I realize they are referring to the germinability of pollen grains, but could this formula (Sucrose, Boric acid, and calcium nitrate) also be advantageous to the germination of seeds? Anyone?

I think there’s an experiment in the making… I could rationalize mechanisms by which those ingredients might aid germination, but one needs to be very cautious about boron toxicity to plants.

About boron effects on plants: 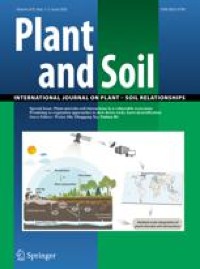 Physiological response of plants to low boron - Plant and Soil

This review focuses on physiological responses in higher plants to B deficiency at the whole plant and organ level. Plants respond to decreasing B supply in soil solutions by slowing down or ceasing growth. Boron deficiency inhibits root elongation...

But back on topic: Pierre’s assertions add credence to some of my observations: Pollen that I know can and has worked often does not for me. I would love to know what type of environmental conditions affect the pollen’s performance – soil moisture? air humidity? phases of the moon? (I had thought it might be temperature, but the pollen has seemingly invalidated that theory during recent weather flukes…)

The growing grounds for the nursery I worked for had toxic levels of boron in the ground water. It was sufficiently high that they had to use city water because the well water killed plants.

The classical first approximation method is to determine if the pollen will accept a stain. See: http://pubs.aic.ca/doi/pdf/10.4141/cjps76-085