could this be applied to rose breeding? 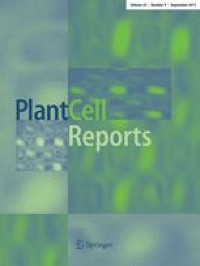 Inducing triploids and tetraploids with high temperatures in Populus sect....

Key message This study is the first to report that triploids and tetraploids have been successfully produced through embryo sac and zygotic embryo chromosome doubling with high temperatures in P. simonii Carr. and its hybrid. Abstract A new synthetic...

If I read it correctly, everyone who is doing breeding in TX or CA or AZ in summer is doing that already. 38-41 C is sort of “normal” summer temp.

I did some summer pollinations for curiousity and because I had an abundance of pollen from a couple of new CV. Was rather surprised that a reasonable fraction (>10%) took, esp on some CV more than other. But I didn’t explicitly label the late hips, except by date of starting stratification. Without cytology its hard to know if it happens.

Cold sometimes has a similar effect.

Mechanism of Creative Evolution (1931) pp. 112-113
Hurst, C. C.
Spontaneous polyploids
Several external factors may be the cause or occasion of this duplication of chromosomes. A severe frost, for example, will temporarily suspend divisions in the pollen grains and cause some germ-cells to form (provided the frost has not been too severe), bearing twice the normal number. These on fertilising normal egg-cells will produce triploids or, if the egg-cells have been similarly affected, tetraploids. In gardens where many plants are out of their natural environment, having come from countries with more regular climates, such occurrences are not infrequent. In their own country, once the winter is over, they produce their flowers with no set-backs, but in England, where we get a warm spell in the spring long enough to bring out the flowers, often followed by a severe frost for several nights just as the flowers are forming, many aberrations and abnormalities arise. Similarly in a wild state, an unusual season may upset many of the normal mechanisms of the plant. De Mol has discovered that many of the different chromosome types in bulbous plants have been due to the custom of drying off the bulbs after the flowering season and, in the case of bulbs for commerce, the subsequent forcing to produce early-flowering for culture in pots. These bulbs, being subjected to various degrees of temperature at the time of the formation of their germ-cells (these being formed deep down in the bud during the previous summer or autumn before flowering), produce various irregularities of division. Many of these irregularities fail to carry on but the few that struggle through will give rise to new races, sometimes of great beauty, for our gardens.

Endopolyploidy and polyteny in differentiation and Evolution: towards an understanding of quantitative and qualitative variation of nuclear DNA in ontogeny and phylogeny (1978) p. 138
W. Nagl
As with other kinds of gene expression, the occurrence, and especially the degree, of endopolyploidy and polyteny are affected by environmental conditions. The nutrition of the plant, e.g. water supply and fertilizing, influences in a characteristic manner the pattern of endopolyploidy in sugar beet (Butterfass, 1964b, 1966; Schlayer, 1968, 1971), while in the shore plant, > Lobularia> , Catarino (1965, 1968) was able to increase the levels of endopolyploidy by spraying the plants with salt water (sea water). Environmental changes due to the seasons (day length, light quality, temperature) also lead to changes in the degree of endopolyploidy in the trichomes of > Urtica > (Tschermak-Woess and Hasitschka, 1954). > Kalanchoe > and > Bryophyllum > react to altered light conditions with changes in the degree of endopolyploidy in their leaves: under short day illumination the maximum degrees of endopolyploidy are higher than under long day illumination (von Witsch and Flügel, 1951, 1952; Resende and Catarino, 1963; Resende et al., 1964). In stem tissue of > Pisum sativum > and > Lupinus angustifolius> , van Oostveldt et al. (1974) and van Oostveldt and van Parijs (1975) have found an inhibitory effect of light on endopolyploidization; in tissues of both plants, growth in continuous darkness allowed the nuclei to reach an octoploid level, but with growth in continuous light the nuclei became only tetraploid (Table 16). In many of these cases where the growth environment determines the level of endopolyploidy this is undoubtedly again the result of different balances of growth regulators within the plant. Resende et al. (1964) argued for this in terms of the internal balance between auxins and cytokinins. Thus, phytohormones are envisaged to control not only the switch to the endo-cycles but also the degree of endopolyploidy through their balance actually existing within a cell at a given point of the tissue (see the preceding section).