I have been considering developing a mobile (android) app to help me reduce the workload of my hybridizing program. There would be a greater chance of success and the effort would probably yield a better and more timely product if was a team effort. Are there any interested parties out there willing to team up on such a project?

As a first iteration I simply want to record a cross and print labels on-the-fly. I’ve been perusing mobile label printers and wonder if anyone has experience with using a label printer in their own program?

Wouldn’t that be cool.

I’m on an iPhone platform, so I can’t be your collaborator. But I’m definitely going to check on mobile label printers. It would be nice to be able to Print as you Pollinate. (and have it all go into a database at the same time)

There’s no reason that two front ends couldn’t be developed simultaneously to work off the same back end. In fact, it would be easy enough to make a browser based front end too. Most of the work is in the back end.

Not so long ago - two years maybe - there were no affordable portable label printers much less any having Bluetooth compatibility. Now we have at least this one.

It looks like a good choice because it is relatively inexpensive and Epson offers mobile developer tools for it. It also gets good reviews at various places because it uses some sort of cassette for labels which eliminates jamming.

It’s probably a good choice even using just the Epson native software if we can find labels that work for us. I’m getting tired of making my own.

I wrote this post before reading Don’s two new posts from last night but I’m too lazy to edit. Talking about same Epson LW-600P:

I’m intrigued by this printer.

Right now before I go out pollinating I print out twenty or so (depending on how much pollen I have) slip-on horticultural labels from my printer in the office before I go out pollinating. I print the name of the pollen parent, and occasionally also print the date. So if I have six pollens to work with I might head out with 120 labels. Often I end up running out of one pollen’s label, but having lots leftover tags of other pollens. There is a crate-load of wasted plastic at the end of the season, as I’m too lazy to always search through leftover labels to find any for that morning’s pollinations.

So, potentially, with the printer to which I linked above, one could print the labels right out in the field…you can spot three flowers that you want to pollinate, choose which pollen you want to use, and boom, print the label. If the labels are weatherproof, one could just wrap the label around the stem and stick it to itself, right? You could include more information such as the seed parent and the pollination date if you so wished. (Including the seed parent on the label would speed hip collection in the fall…right now I have to write the seed parent on the ziploc before putting in the hips…

What would make the system totally freaking cool is if I could print to this printer from Filemaker Go (Filemaker is an easy database program, and Filemaker Go is the mobile version of it. I’m not sure if there is an Android FM GO app, but there is an iOS one.) Then I would be simultaneously and effortlessly recording all crosses made in real time. This will take more Googling, and I’m skeptical that this printer will be able to receive communications from FM GO.

There’s no reason that two front ends couldn’t be developed simultaneously to work off the same back end. In fact, it would be easy enough to make a browser based front end too. Most of the work is in the back end.

If you’re into that kind of thing, I guess. No judgement.

Doing some quick math (and correct me if I’m wrong) it seems like the Epson tape cartridges would end up costing about fifteen cents per three-inch label (which would be folded over to make a 1.5" writing area). That’s for the 1/2" black on yellow tape. That’s a little steep, but might be worth it if your app simultaneously updated a database.

simultaneously and effortlessly recording all crosses made in real time

That’s the motive for developing the app - the label is gravy, the real value is the record keeping.

These printers are inexpensive but their consumables - the actual labels - add up. The Epson brand labels run about $0.25 each which in my world is prohibitive but I found some Chinese knockoffs that would lower the cost to about a nickel if they hold up to weather.

I’m planning to pump the captured data up to a cloud database from which you would be able to export via xml or whatever. It would work two ways, too, so that your picklist of cultivar names comes down to you and the cross data goes back up - nothing stays on the device except the app itself.

I’m not locked into the Epson, btw, feel free to scout other options. For instance

The printer is incidental, actually. You could continue to use your fancy schmancy tag labeler so long as IOS supports it as a printer and the app can speak to it. I’m not OIS versant so that’s somebody else’s job.

Hi- this appeals to the geek in me.

I love Filemaker and use it to track all my crosses and germination rates, though I haven’t used it yet to track individual pollinations. I don’t imagine that would be a problem. Filemaker Go (the mobile app) has a couple of limitations: you can’t create your database in the free Filemaker Go. You need Filemaker Pro (free for 30 days and then rather pricey) to create it. Syncing your database between Go and your computer is clunky but possible (it works best with Filemaker Server which is not really an option for most home users.)

Other than that it should work fine- you can print from the Go app to a wifi printer- those label printers should be possible.
http://www.colibrisolutions.com/2014/08/26/mobile-printing-with-filemaker-go-13-and-mobi-print-–-demo/

Here are a couple of screen caps from Filemaker Go on my iPad, showing my database of crosses.
[attachment=0]IMG_0118 (1).jpg[/attachment] 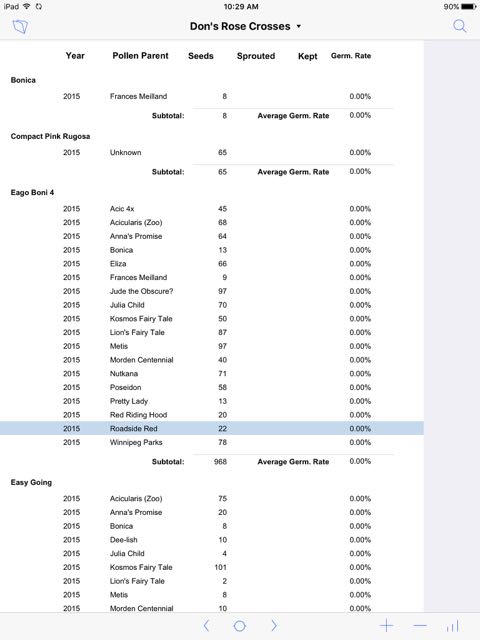 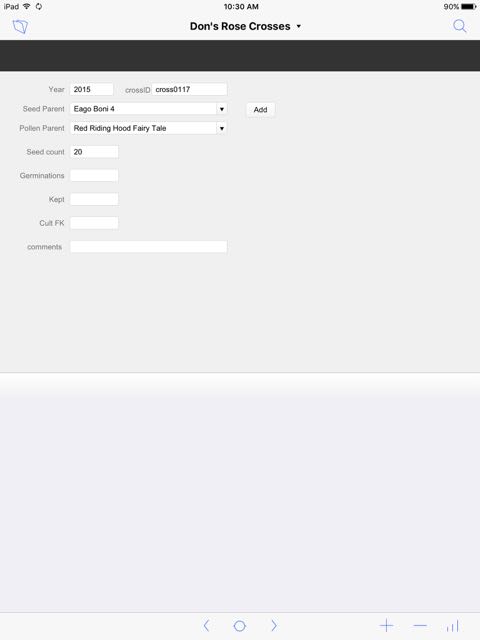